Thousands of counterfeit COVID-19 vaccination cards have been seized by federal officials in Memphis, Tennessee, over the last year, according to U.S. border patrol officials, as the Senate’s top Democrat urges a broader federal crackdown on the fake cards.

U.S. Customs and Border Protection (CBP) has reported confiscating 3,017 of the fraudulent paper cards from 121 shipments that had arrived at a Memphis port from China as of Friday.

The cards, which authorities said were destined for New Orleans, feature the Centers for Disease Control and Prevention (CDC) logo in the upper right corner and are blank to allow the recipient to fill in their name, birthdate, and information about the vaccine they are alleging to have received. But there are a number of typos and unfinished words, and some of the Spanish verbiage on the back is misspelled, the CBP said in a release. 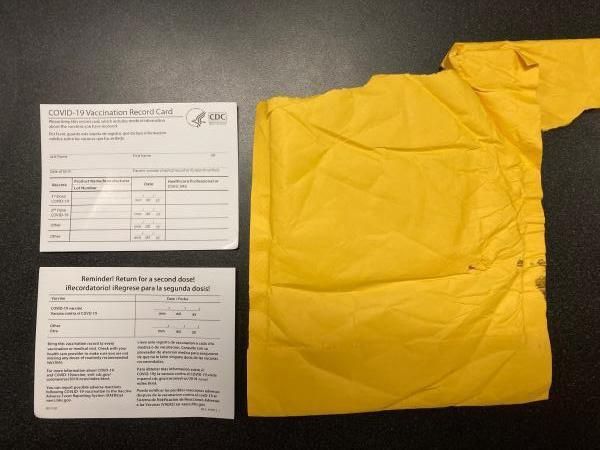 Buying, selling or using a fake vaccination card that features an official government agency seal ― like that of the CDC or the Department of Health and Human Services (HHS) ― can result in a fine and up to five years in prison, the CBP said.

“If you do not wish to receive a vaccine, that is your decision. But don’t order a counterfeit, waste my officer’s time, break the law, and misrepresent yourself,” Michael Neipert, Area Port Director of Memphis, said in a statement. “When you order a fake vaxx card, you are using my officers time as they also seize fentanyl and methamphetamines.”

Similar seizures have been reported across the country, prompting Sen. Chuck Schumer (D-N.Y.) on Sunday to call upon the CBP to team up with the FBI and officials with the HHS to better crack down on these cards, The Associated Press reported.

Schumer further requested that the Justice Department prioritize cases involving these cards and for the CBP to strengthen its efforts detecting them upon their overseas arrival.

Last month, a homeopathic doctor in California was charged with one count of wire fraud and one count of making false statements related to health care matters after being accused of selling fraudulent COVID-19 vaccination cards and “immunization pellets” to patients. It was the first federal case of fraud relating to fake COVID-19 inoculations and vaccination cards. If convicted, she faces up to 25 years in prison and a fine of up to $250,000.

Schumer’s office did not immediately respond to HuffPost’s request for comment Sunday.