London: Australian Senator Kimberly Kitching says she is nominating human rights campaigner Bill Browder for next year’s Nobel Peace Prize, for his work in advocating the adoption of so-called Magnitsky Acts around the world.

The Labor senator revealed her intention while accepting the Magnitsky Human Rights award in London for her work in getting Australia to adopt a human rights sanction regime.

MPs are among a select group of people who can put forward nominations for the annual Nobel Peace Prize. 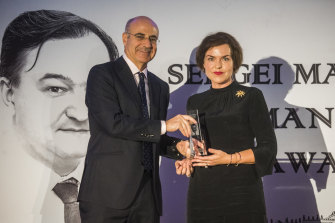 Sergei Magnitsky was a Russian tax advisor who alleged the Russian state had sanctioned large-scale theft carried out by Russian officials. He was working for American-British financier Bill Browder’s firm Hermitage Capital Management which the Russian government accused of tax evasion.

Magnitsky was arrested, tortured and died in custody one day before the expiration of a 12-month limit for detention without trial under Russian law.

His death sparked a fierce global backlash. In the US, the then Obama administration became the first to introduce legislation, commonly called the Magnitsky Act, to sanction the officials accused of killing Sergei.

The legislation has since been adopted by 32 other countries and recently been used against Chinese officials over the persecution of Uighur Muslims in Xinjiang.

Momentum in Australia to adopt a similar bill stalled until Kitching took up the cause, following a Zoom meeting with Browder.

“Australia’s a country that’s completely on the other side of the world and for years I’d been trying to get things going, and I couldn’t get any traction at all,” Browder told the awards ceremony.

“And the moment I met Kimberley on Zoom, everything started to happen.

“She got the government to agree to do a Magnitsky Act and I understand that it will pass in the next two weeks and Australia will be the 34th country in the world to have a Magnitsky Act,” he said.

“We almost have the whole world covered,” he said.

Kitching paid tribute to her fellow “Wolverines” – Liberal China-hawks Senator James Paterson and Assistant Defence Minister Andrew Hastie – as well as Foreign Minister Marise Payne and the former Labor MP Michael Danby who had pushed for an Australian Magnitsky Act before his retirement in 2016.

“We’ve never given up on having this law, it’s been delightful to find allies across the aisle and in the crossbench,” she said.

The bill is expected to pass before the Parliament rises for the year.

“I’m so grateful there are people like Bill Browder in the room and that had me thinking,” she said.

“So I am going to nominate Bill for the Nobel Peace Prize, as a member of a national assembly or a national parliament I am able to do so,” she said, to applause. 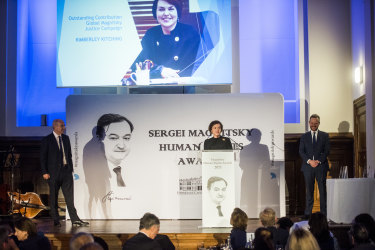 “We’ll have a campaign – this will bring more attention to Sergei Magnitsky and his death as well. It will mean, as Bill hopes, that his death is not meaningless.

Also honoured at the awards was Nazanin Zaghari-Ratcliffe, the British-Iranian woman who has been held in Iran amid a row over a historical debt between the two nations.

Her seven-year-old daughter, Gabriella, read out a speech from her mother who she hasn’t seen in years. 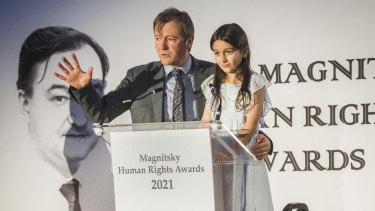 Richard Ratcliffe and his seven-year-old daughter Gabriella accepting a Magnitsky Human Rights Award on behalf of Nazanin Zaghari-Ratcliffe who is detained in Iran.Credit:Sean Pollock

“It makes my heart melt to see my daughter, now big enough to receive this award and to read these words,” Gabriella read.

“One day may we live in a world where we do not need to fight for our freedom but thank you to all of you for walking next to us while we still need to do this fight and for still reminding us that freedom is one day closer,” he said.

Zaghari-Ratcliffe has been freed from prison but remains under house arrest in Iran.