Andy McCarthy: Acquittal of Rittenhouse ‘is a just verdict’

Former Assistant U.S. Attorney Andy McCarthy on Kyle Rittenhouse being found not guilty on all charges.

Police departments in major cities across the country are monitoring for any potential activity Friday and through the weekend following the acquittal of Kyle Rittenhouse on murder charges in Kenosha, Wisconsin.

A Kenosha County jury found the Illinois teenager not guilty on all charges after he fatally shot two men and wounded a third during a night of unrest that was sparked by the police shooting of Jacob Blake. Throughout the highly-publicized and divisive trial, demonstrators and supporters of Rittenhouse gathered outside the courthouse and sometimes clashed.

Kyle Rittenhouse, center, enters the courtroom with his attorneys Mark Richards, left, and Corey Chirafisi for a meeting called by Judge Bruce Schroeder at the Kenosha County Courthouse in Kenosha, Wis. Police departments across the country said they were ensuring the right to peaceful protests following his not guilty verdict Friday.
(Sean Krajacic/The Kenosha News)

The acquittal renewed fears by some of another round of potential protests and riots. In a statement after the verdict, President Biden noted the result left him feeling “angry and concerned” but urged “everyone to express their views peacefully, consistent with the rule of law.”

“Violence and destruction of property have no place in our democracy,” he added.

However, police departments across the country are preparing for what could be a weekend of violence.

A police spokesman in Milwaukee, located about 40 miles north of Kenosha, told Fox News the department has not received any known credible threats to the city. He added that the agency respects people’s First Amendment rights.

Authorities in Washington, D.C., where multiple riots broke out in the summer of 2020, said they are monitoring events across the country. 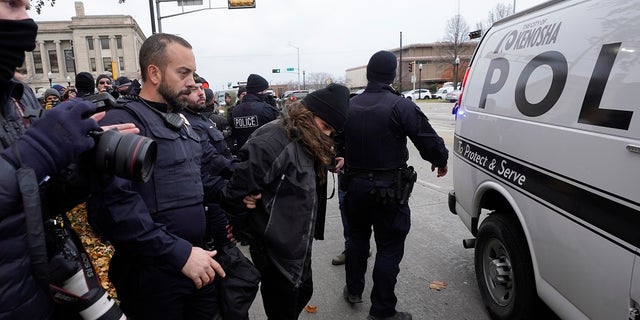 “MPD maintains a level of preparation that would allow it to respond appropriately to any emerging concerns that may arise should it become necessary,” the Metropolitan Police Department said.

In New York City, the NYPD declined to say whether any specific preparations were being made to address any potential violence related to reaction over the verdict but acknowledged that it protects the “constitutional right to peaceful protest.”

For Our Liberation, a social justice group, said it plans to gather in front of the Barclays Center in Brooklyn in solidarity with Kenosha and in honor of Blake.

The Los Angeles Police Department told Fox News it was aware of the verdict and has resources available if needed. After the acquittal, Chicago Mayor Lori Lightfoot said she respected the decision. 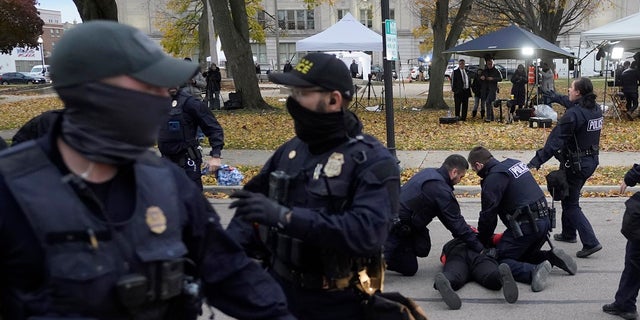 A protester is taken into custody by police outside the Kenosha County Courthouse, Wednesday, Nov. 17, 2021 in Kenosha, Wis., during the Kyle Rittenhouse murder trial. (AP Photo/Paul Sancya)

“However, no one should ever take the law into their own hands or attempt to make themselves the judge, jury and executioner,” she said in a statement. “What Kyle Rittenhouse did was reckless, dangerous and showed an utter disregard for human life.”

The Chicago Police Department said there were no additional deployments as of Friday afternoon, but it was monitoring events to ensure public safety.