Beijing loyalists have anointed an ex-security chief who oversaw the crackdown on Hong Kong’s democracy movement as the region’s new leader.

John Lee, 64, was the only candidate in the Beijing-backed race to succeed outgoing leader Carrie Lam.

The elevation of Lee, who is currently subject to US sanctions, places a security official in the top job for the first time amid a tumultuous few years for a city battered by political unrest and debilitating pandemic controls.

Despite the city’s mini-constitution promising universal suffrage, Hong Kong has never been a democracy, the source of years of public frustration and protests since the 1997 handover to China.

Its leader is instead chosen by an ‘election committee’ currently comprised of 1,461 people – roughly 0.02 percent of the city’s population.

After a brief secret ballot on Sunday, 99 percent of those who cast ballots (1,416 members) voted for Lee while only eight voted against, according to officials. 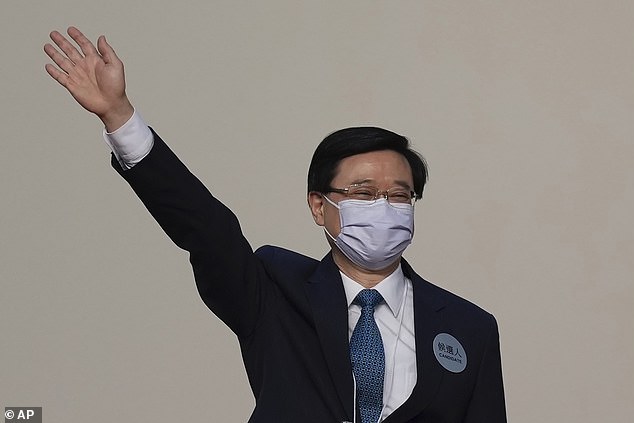 Former security chief John Lee was the only candidate in the Beijing-backed race, with 99 per cent of those who cast ballots voting for him 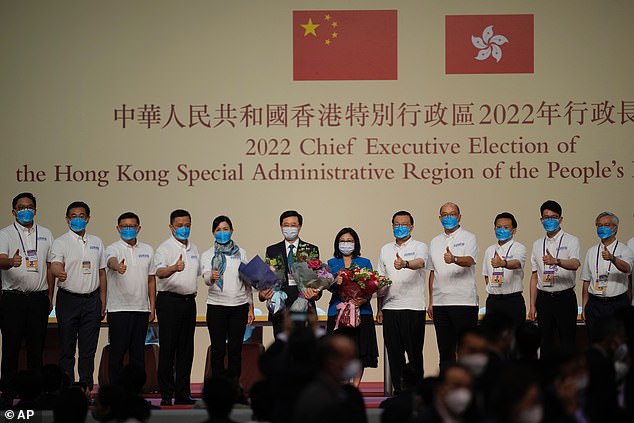 John Lee ( centre left), the former number two official in Hong Kong and the only candidate for the city’s top job, celebrates with his wife (centre right) after declaring victory in the chief executive election 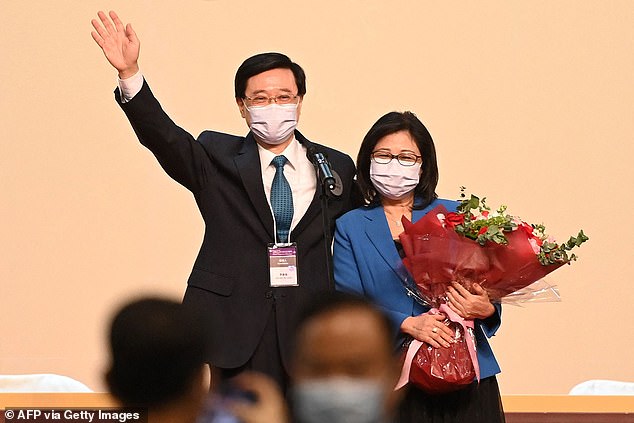 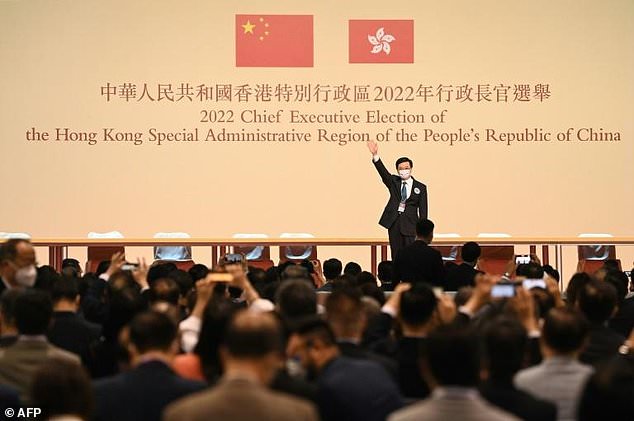 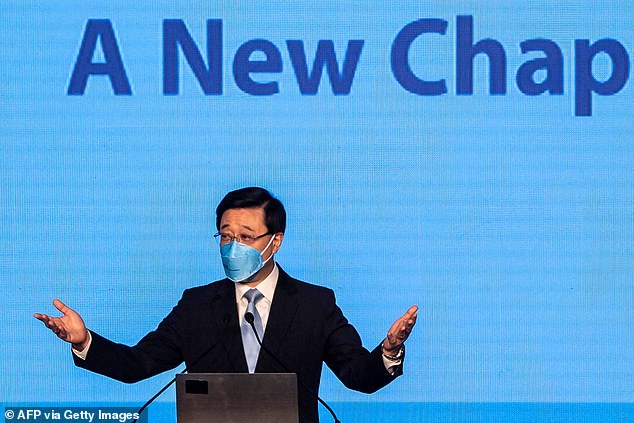 Lee speaking at an event in Hong Kong before the city on Friday, two days prior to his election victory

Beijing hailed the near-unanimous result, saying it showed ‘Hong Kong society has a high level of recognition and approval’ for Lee.

‘This is a real demonstration of democratic spirit’, the Hong Kong and Macao Affairs Office said.

Borrell described Sunday’s result as ‘yet another step in the dismantling of the “one country, two systems” principle’ in which Beijing had promised Hong Kong could maintain key freedoms and autonomy.

Under President Xi Jinping, China is remoulding Hong Kong in its own authoritarian image after huge and sometimes violent democracy protests three years ago.

Beijing deployed a sweeping national security law to stamp out dissent and rolled out a new ‘patriots only’ political vetting system to guarantee anyone standing for office is considered suitably loyal. 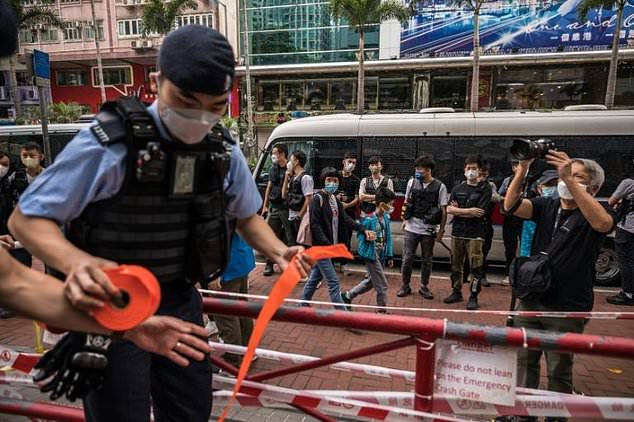 Protests have been largely outlawed, with authorities enforcing an anti-coronavirus ban on public gatherings of more than four people as well as the security law

Protests have been largely outlawed, with authorities enforcing an anti-coronavirus ban on public gatherings of more than four people as well as the security law.

The League of Social Democrats – one of the only remaining pro-democracy groups – held a three-person protest before polls opened Sunday, chanting ‘Power to the people, universal suffrage now’.

‘We know this action will have no effect, but we don’t want Hong Kong to be completely silent’, protester Vanessa Chan said as dozens of police officers looked on.

While the democracy movement has been crushed, much of the population still resents Beijing’s rule and chafes at the city’s entrenched inequality.

Hong Kong also faces economic difficulties thanks to two years of strict pandemic curbs that have damaged its business hub reputation and left residents cut off as rivals reopen.

Lee was asked by reporters on Sunday whether he lacked a genuine mandate.

‘I do understand there will be time that is needed for me to convince the people’, he replied.

‘But I can do that by action.’

He said he planned to build a Hong Kong that is ‘full of hope, opportunities and harmony’ now that authorities had ‘restored order from chaos’.

So far, his campaign has been light on concrete policy details – particularly how he plans to reopen Hong Kong to both international and mainland travel at a time when China is doubling down on its strict zero-Covid strategy. 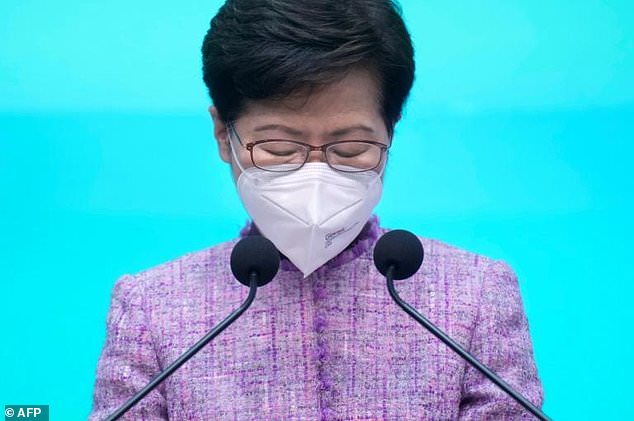 Hong Kong’s chief executives find themselves caught between the democratic aspirations of the city’s residents and the authoritarian demands of Beijing’s leaders.

According to a survey in March by the Public Opinion Research Institute, about 24 percent of the public has confidence in Lee, compared with 12 percent for Lam.

Waiting in a line outside a restaurant on Sunday, 25-year-old resident Alex Tam said he and his friends were paying little attention to proceedings.

‘If he didn’t listen to the protesters, I don’t see how he would listen to young people now, especially those who criticise the government.’

Retired businessman Yeung Wing-shun was more positive, saying he hoped Lee would guide Hong Kong with a ‘firm hand’, adding that he believed the new leader could bring different sectors together.

Lee will take office on July 1, the 25th anniversary of Hong Kong’s handover to China from Britain and the halfway point of “One Country, Two Systems”.

Beijing and Lee say that formula is still intact.

Critics, including many Western powers, say it has been shredded.