Biden demanded bipartisan support before signing AUKUS. Labor was not told for months

The Biden administration insisted from the outset that it would only consider pursuing the landmark AUKUS project if it had solid support from both major Australian political parties, yet Prime Minister Scott Morrison chose not to consult Labor until the day before its announcement.

By waiting four-and-a-half months, the prime minister made AUKUS into a high-stakes, last-minute political gambit. 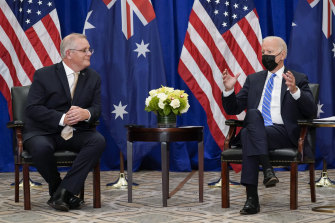 And, when Morrison later challenged Labor publicly over whether it fully supported the deal, he seemed to be looking for a way to politicise the security partnership.

White House officials emphasised the point as a deal-breaker in the very first discussion on Australia’s request for nuclear-propelled submarines.

“We asked lots of questions about politics,” said Campbell in an interview. “Would this be contentious? Would this hold?”

Bipartisan political commitment from Labor and Liberal was a prerequisite, the Americans said.

“This would be a military marriage. It would have to hold over decades.”

Shearer, the director of the Office of National Intelligence, replied that, though the government had not consulted Labor, “public debate about the threat had changed significantly and there was a pretty strong bipartisan agreement with the Left on the security environment in Australia”, according to participants in the meeting. 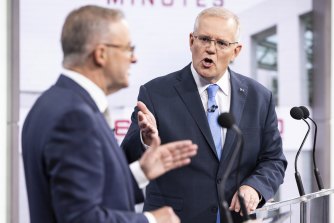 The US returned to the question repeatedly in the secret talks that unfolded over the months.

“If Albo says ‘no’, the deal will be dead,” Australia’s ambassador to Washington, Arthur Sinodinos, explained to Australian interlocutors.

The Americans quietly tested political support within their own system.

The Democratic White House confidentially consulted Republican senators aligned with Donald Trump. They found them supportive, even enthusiastic, at the prospect of AUKUS.

But they were frustrated at the lack of clarity from Australia. They called on a special assistant to the President who had been posted to Australia, Edgard Kagan, for his view.

He observed that the Australian government seemed confident that Labor would support such a deal when they were eventually informed.

The Americans could see that if Labor baulked, Morrison would use it as a wedge against Opposition Leader Anthony Albanese in the approach to an election.

They would frame him as weak on national security.

“The government has clearly thought this through, and we should submit to their judgment,” Kagan argued internally.

When asked why he had decided not to consult Labor over AUKUS until the last minute, Morrison told The Sydney Morning Herald and The Age: “I believed the Labor party would support it.” He was proved right.

Morrison and officials briefed Labor leader Anthony Albanese and the Labor leadership the day before the planned announcement.

The next day Albanese chaired a shadow cabinet meeting, which recommended that Labor support AUKUS. A full caucus meeting the same day endorsed the decision without dissent.

Morrison has since challenged Albanese on several occasions, including the leader’s debate on Wednesday.

Albanese said: “We do support that, you know that.” Morrison: “Doesn’t sound like it.”