Follow
Home » World News » Can a bulldozer vault out of this? Morrison has seven days to try

Can a bulldozer vault out of this? Morrison has seven days to try

The telltale came towards the end of Wednesday’s debate, when each of the two leaders was asked to name one redeeming feature of the other.

Scott Morrison started well: “The thing about Anthony that I’ve always admired is that he’s never forgot where he’s come from.” He grew up in housing commission, rose from very humble beginnings to become the leader of Australia’s oldest political party and “he should be commended for that”. 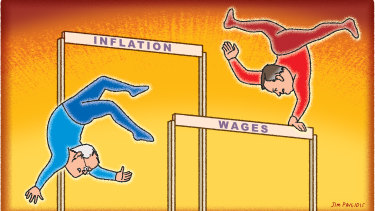 But he couldn’t help himself: “But to do this job, you need to know your stuff, you need to be across the detail, you need to not make things up on the run, and you can’t be loose on the economy.”

Anthony Albanese laughed it off – “he was trying there” – and then paid compliment to Morrison for being “absolutely committed to his nation and I admire that”. He also applauded Morrison for his commitment to mental health policy. The prime minister’s only comeback: “I must have misunderstood the question.” Oops.

It was a telltale because it demonstrated that Morrison was fully primed to attack. Even when he shouldn’t. He’s on trajectory to lose the election next week and desperate to do whatever he can to tear down Albanese. It’s his only chance.

Morrison acted on the same urge this week when Albanese said he “absolutely” supported raising the minimum wage to keep up with consumer inflation, which is running at 5.1 per cent a year. It was a one-word answer from Albanese that looked offhand and the prime minister attacked relentlessly:

“Mr Albanese showed yesterday that he is a complete loose unit on this stuff. He just runs off. He just runs off at the mouth. I mean it’s like he just unzips his head and just lets everything fall on the table. That is no way to run the economy because that only leads if you vote Labor to having a leader who can make interest rates worse, who can make inflation worse.”

He warned of a vicious cycle. “It’s like throwing fuel on the fire of rising interest rates and rising costs of living.”

And this is a perfectly legitimate line of attack. Australia did have a problem with a vicious wage-price spiral in the olden days of a fixed, centralised wages system. Rising prices fed into rising wages, which pushed inflation higher, which pushed wages higher again, and so on. Until the Reserve Bank intervened with higher interest rates to quash the inflation in the system. It kept Australia in a destructive boom-bust cycle. All true.

And it was irresistible for Morrison because it played perfectly into his central critique of Albanese. This is a gift that the Liberals doubtless will package into TV ads on their favourite theme – Albanese’s campaign gaffes show he’s a risk to the economy.

But the overarching political point is this. Most voters won’t hear Morrison’s detailed arguments about the economic system. All they hear is that he’s opposed to a pay rise. For people on the minimum wage. Which is $20.33 an hour. So a 5.1 per cent raise would amount to one dollar an hour.

And when asked the straight question by a reporter – “Do you support Australians on the minimum wage getting a pay rise, so it keeps up with the cost of living?” – he couldn’t say yes. The best he could do was: “I support the process we’ve always had for the setting of the minimum wage.” In other words, leave it to the Fair Work Commission.

It was the Labor leader’s turn to pounce. “Scott Morrison is saying, ‘Wages will always be lower under the Liberal Party.’ That is what he is making very clear … And now he’s saying, ‘If we give people who are on the minimum wage just $20.33 an hour, we give them an extra $1 an hour, the sky will fall in.’ What they know about this bloke is that he is not on their side.”

It’s actually even worse than this. The employer lobby is saying that a rise in the minimum wage of 3 per cent is acceptable and responsible. So now the argument is between 3 per cent and 5.1 per cent. That is a difference of just 40¢. So, in effect, Morrison was thundering against the evils of giving the lowest paid people in the country an extra 40¢ an hour. 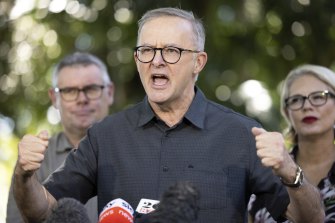 It was a mistake. Morrison was so caught up in attack politics that he lost sight of retail politics, so intent on his rival that he forgot the voters. It’s OK to have your campaign attack the other guy brutally, but for the leader himself to do it is risky business. He might have retained the support of the small business vote, but at the cost of the voters he really needs to win over. The Liberals have now realised their error. On Friday, following three days of frantic attacks on Albanese over wages, Morrison didn’t utter the word “wages”.

Instead, in the starkest sign yet that Morrison’s campaign is failing, he promised to change: “Australians know that I can be a bit of a bulldozer when it comes to issues,” he told his daily press conference. That had been necessary to get things done, he said, including the AUKUS deal and a new defence agreement with Japan.

“On the other side of this election, I know there are things that are going to have to change with the way I do things. Because we are moving into a different time. We are moving into a time of opportunity.” This is as close as Morrison gets to a mea culpa.

On Albanese’s campaign, there was a moment of panic after his “absolutely” comment on lifting the minimum wage. In fear that they’d actually taken a stand on something controversial, Labor flapped about for a couple of days, trying to qualify its position.

Labor ultimately decided to stick with the principle of supporting wage rises for the low-paid to keep pace with inflation. But it would decide the specifics of any case it might take to the Fair Work Commission only once it was in government.

Labor actually has a pretty strong case. Three quick economics points, then the big political point. First is that Hawke and Keating dismantled the old wage-setting system. That’s what the Accord was all about. It decentralised the system. A vicious cycle can still emerge, but the old automatic one has been broken.

Second, a pay rise for low-paid people goes straight into consumer spending. The low-paid generally need to spend everything they earn just to get by. As the former Treasury economist Warren Logan argued in these pages this week, “supporting household incomes through a period of rising interest rates is our best chance of keeping the economy on an even keel”.

Third, if Morrison truly cared about inflationary pressures he and Josh Frydenberg wouldn’t have pumped so much spending and debt into the economy two months ago. At exactly the moment that global interest rates are rising. 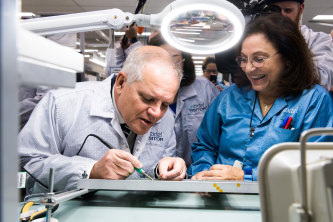 Eye on the future? Prime Minister Scott Morrison visits Extel Technologies in Melbourne With MP Gladys Liu in her seat of Chisholm on Friday. Credit:James Brickwood

And the big political point? According to the conventional campaigning wisdom, the economy is safe Liberal territory. Labor is supposed to avoid it and stick with areas where Labor is perceived to be strong, such as health and education.

But this week’s argument over wages has been working in Labor’s favour. So it turns the conventional wisdom on its head. It is possible for Labor to fight and win on economic themes, so long as they’re ones that offer benefit to ordinary voters. “The economy” in abstract might work for the Liberals, but an economy that benefits ordinary workers is ground that Labor can fight on.

At the first leaders’ debate carried by Sky News, he didn’t mention it. His campaigning is all about his record. In Wednesday’s debate on Seven, the third and final, he tried to remedy this in a half-hearted way. For Labor, the future is at the centre. It’s the opening of every Albanese pitch. It’s actually their slogan: “A Better Future.” Morrison appears to be satisfied with the status quo. Including the minimum wage. The Liberals’ campaign needs urgently to address this flaw.

One week out from election day, the Coalition is in deep trouble. Labor is confident that it is facing minimal losses. Of the 18 crucial seats where it conducts tracking polling, 14 are Coalition-held seats where Labor believes it is now ahead or very competitive.

Reid and Robertson in NSW, Brisbane, Leichhardt, Longman and Flynn in Queensland, Deakin and Chisholm in Melbourne, Boothby in South Australia, Hasluck, Pearce and Swan in Western Australia, and Bass and Braddon in Tasmania. These are the seats where Morrison and Albanese will be competing hardest in the next week. Remember that, on net, the Coalition can’t afford to lose any seats if it wants to hold majority government. Labor needs to win a minimum net seven.