Manchester: Boris Johnson has urged voters to embrace the pain of Brexit in exchange for the longer-term gains of higher wages.

He also falsely claimed that closer defence ties with Australia would not have been possible if Britain were still in the European Union.

The British Prime Minister entertained hundreds of party members gathered in Manchester for the first Conservative party conference since his landslide victory in 2019 when he was elected on the promise to “Get Brexit Done”, following years of political deadlock in the Commons over how to leave the single market. 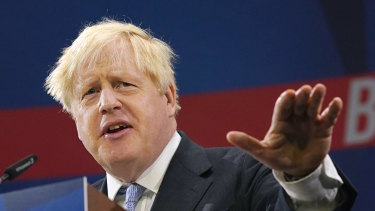 Britain is experiencing a potent mix of supply chain shortages including food and petrol, while businesses are complaining of acute labour shortages. All three are the result of the pandemic but have been exacerbated in Britain compared to the continent because of Brexit.

Johnson has shown little sympathy for businesses, including for pig farmers who have begun culling hundreds of piglets because they do not have enough abattoir workers to slaughter them. Johnson criticised them for relying on cheap labour.

He said there would be no going back to the “same old broken model” of low wages, growth, skills and productivity which he said had all been “enabled and assisted by uncontrolled immigration”.

“The answer to the present stresses and strains which are mainly a function of growth and economic revival is not to reach for that same old lever of uncontrolled immigration to keep wages low,” he said.

“The answer is to control immigration, to allow people of talent to come to this country but not to use immigration as an excuse for failure to invest in people, in skills and in the equipment, the facilities, the machinery they need to do their jobs,” he said.

He linked the shortage of truck drivers to a lack of investment in “basic facilities” which meant that drivers had to urinate in the bushes, putting them off the profession.

“The direction in which this country is going now, towards a high wage, high skill, high productivity, and yes, thereby low tax economy … is what the people of this country need and deserve,” he said.

Johnson did not announce any new policies in his joke-filled speech, which focussed heavily on his election win, the vaccine rollout and the delivery of Brexit.

But he sought to mislead when he claimed that the new AUKUS agreement to share defence technology with Australia in the area of submarines was only possible because of the vote to leave.

“If you want a supreme example of global Britain in action, of something daring and brilliant that would simply not have happened if we had remained in the EU, I give you AUKUS,” he said.

“An idea so transparently right that Labour conference voted overwhelmingly against it.”

Under EU Treaties countries’ defence and security arrangements are for sovereign nations to determine. For example, France is a member of the European Union but negotiated its own deal with Australia to procure diesel-electric submarines which were subsequently scrapped when AUKUS was announced, causing a diplomatic storm.

“Membership of the EU is irrelevant to AUKUS,” Conservative MP and Chair of the Commons Defence select committee Tobais Ellwood told The Sydney Morning Herald and The Age. 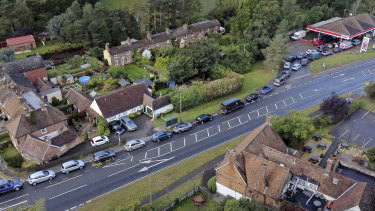 Short-term pain: motorists queue for fuel at a petrol station in Ashford, England.Credit:AP

“It’s being sold as a post Brexit initiative. But that’s misleading.” He said that an enhanced QUAD involving Britain and France would have been a stronger alliance.

And he said that an enhanced Quad involving Britain would have been a stronger alliance than AUKUS.

“The QUAD is the strategic way forward if we wish to challenge China’s errant behaviour. Japan and India were scratching their heads after the AUKUS announcement.”

‘, Boris, from, Johnson, path, sees
You may also like: