Follow
Home » World News » Boy, 2, mauled by Akita dog which clamped its jaws round his head but miraculously survived thanks to woolly hat

Boy, 2, mauled by Akita dog which clamped its jaws round his head but miraculously survived thanks to woolly hat

A TWO-year-old boy miraculously survived an attack by a dog that tried to clamp its jaws around his head – thanks to his woolly hat.

Toddler Paul-Naylass Passmore was walking to nursery with his mum Courtney Jones, 25, when a dog ran out of a nearby South Staffordshire flat and savagely attacked him. 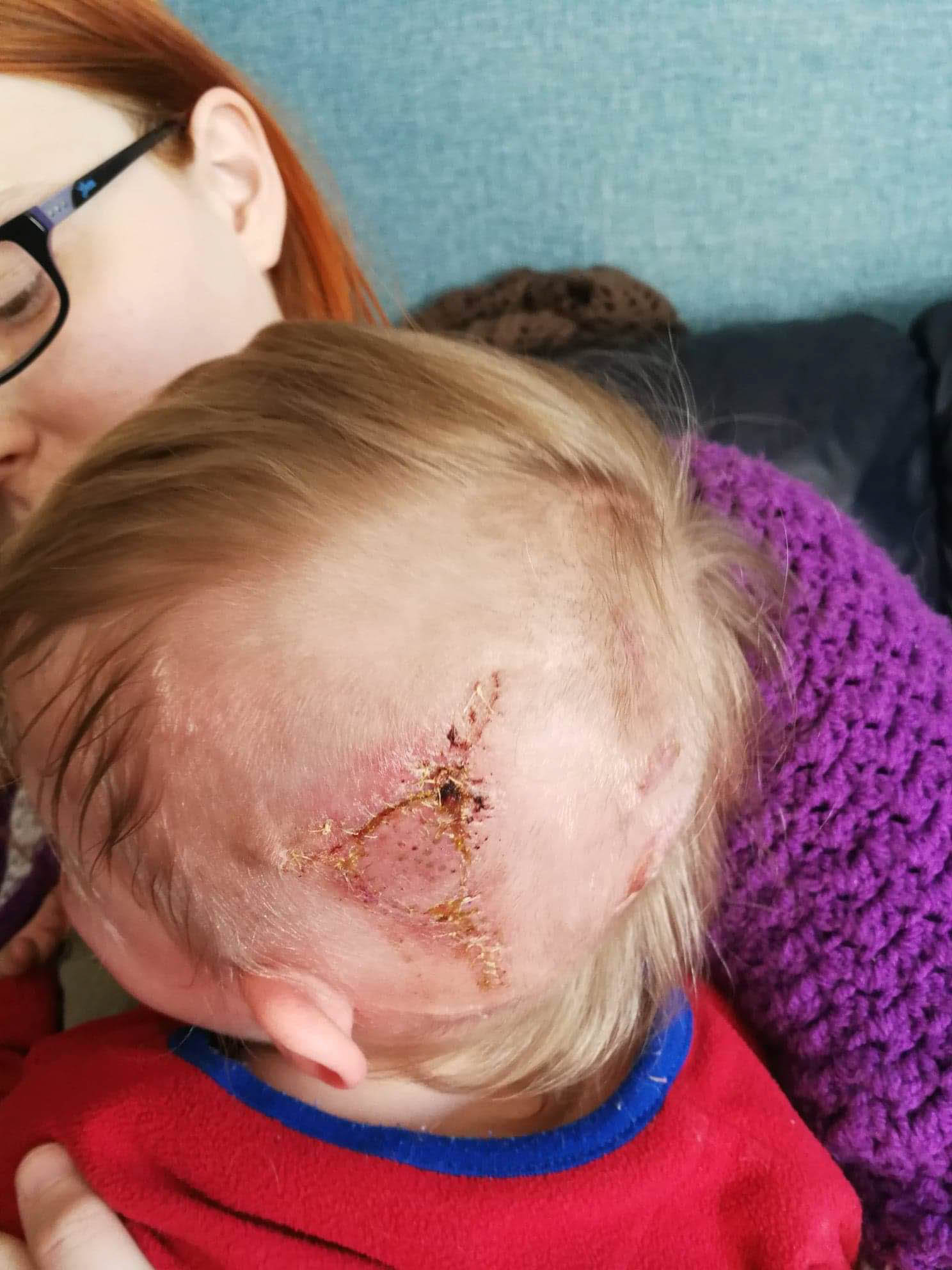 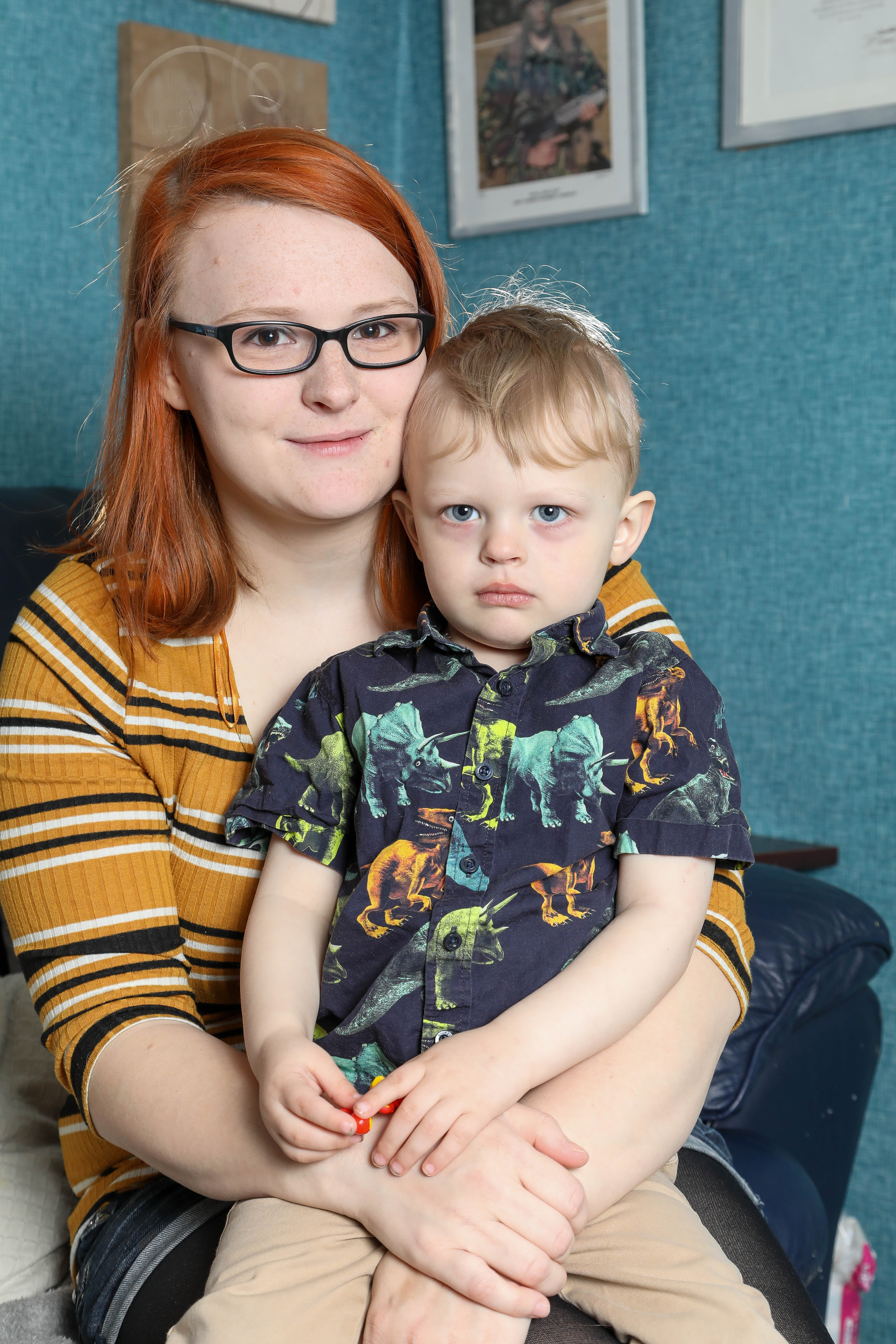 The attack happened after Courtney left their flat to take daughter Evelyn-Rose, three, to nursery, along with little Paul-Naylass, on March 22.

Just as they were walking out the door, a dog from an upstairs flat bounded down the stairs, past Evelyn-Rose, and launched at her brother.

The American Akita sank its jaws into the boy's scalp, and ripped an 8 x 5 cm chunk of flesh off his head and spit it on the ground.

The little boy ducked down to protect himself, but the massive dog sank his teeth into his lower back, picking him up and shaking him side to side like a chew toy.

Mum-of-two Courtney grabbed her son away from the hound and dragged him back into the flat before returning to pull her daughter to safety.

The toddler was rushed to hospital, before his dad James Passmore, 37, discovered the discarded piece of scalp and raced after them – transporting it in an ice-filled kids' lunchbox.

Paul-Naylass stayed under doctor's care for four nights, enduring an operation to re-attach his severed scalp, and a skin graft from the back of his head to the injury. 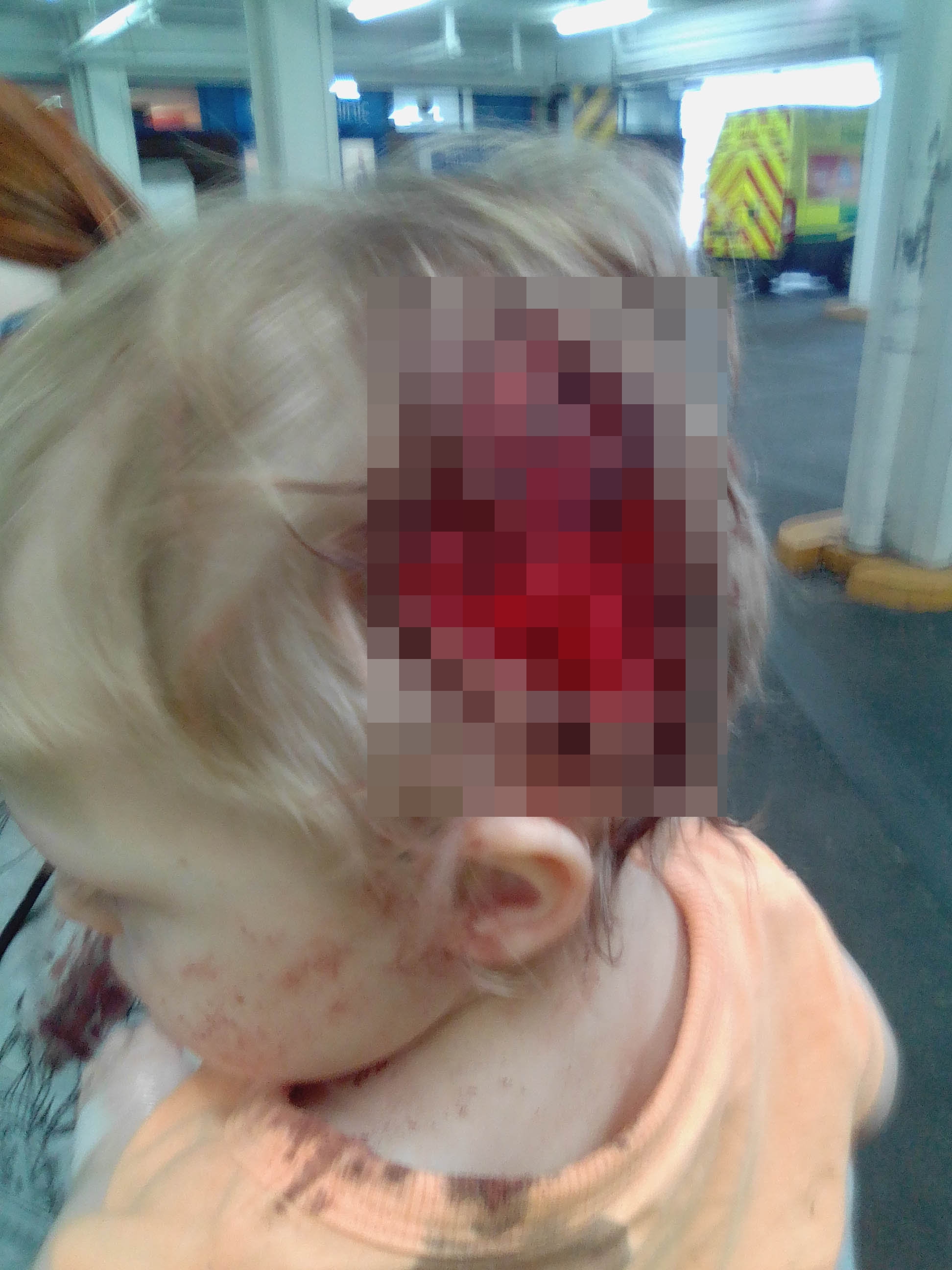 But medics told the family it could have been much worse if the pet had punctured his skull.

Dad James said thankfully the beast couldn't get a grip on his son's head due to his knitted, blue beanie which saved his life.

"They said it could've been years of surgeries if they couldn't reattach scalp and if had punctured skull," he said.

"Luckily for my son it was the easier option in the end, there was no major damage it was just skin damage, but it doesn't make it right.

"We believe because he had his woolly hat on, that's what saved him." 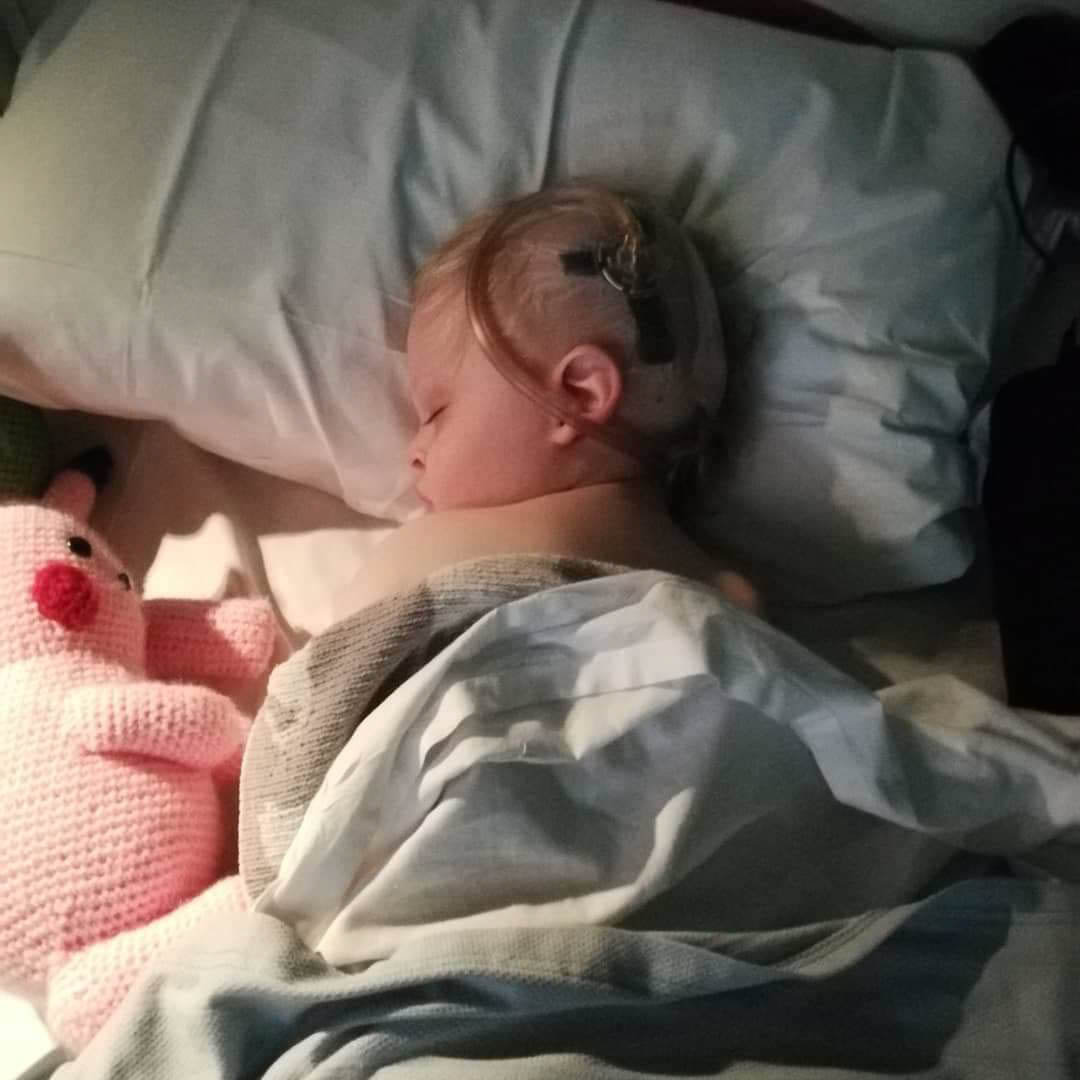 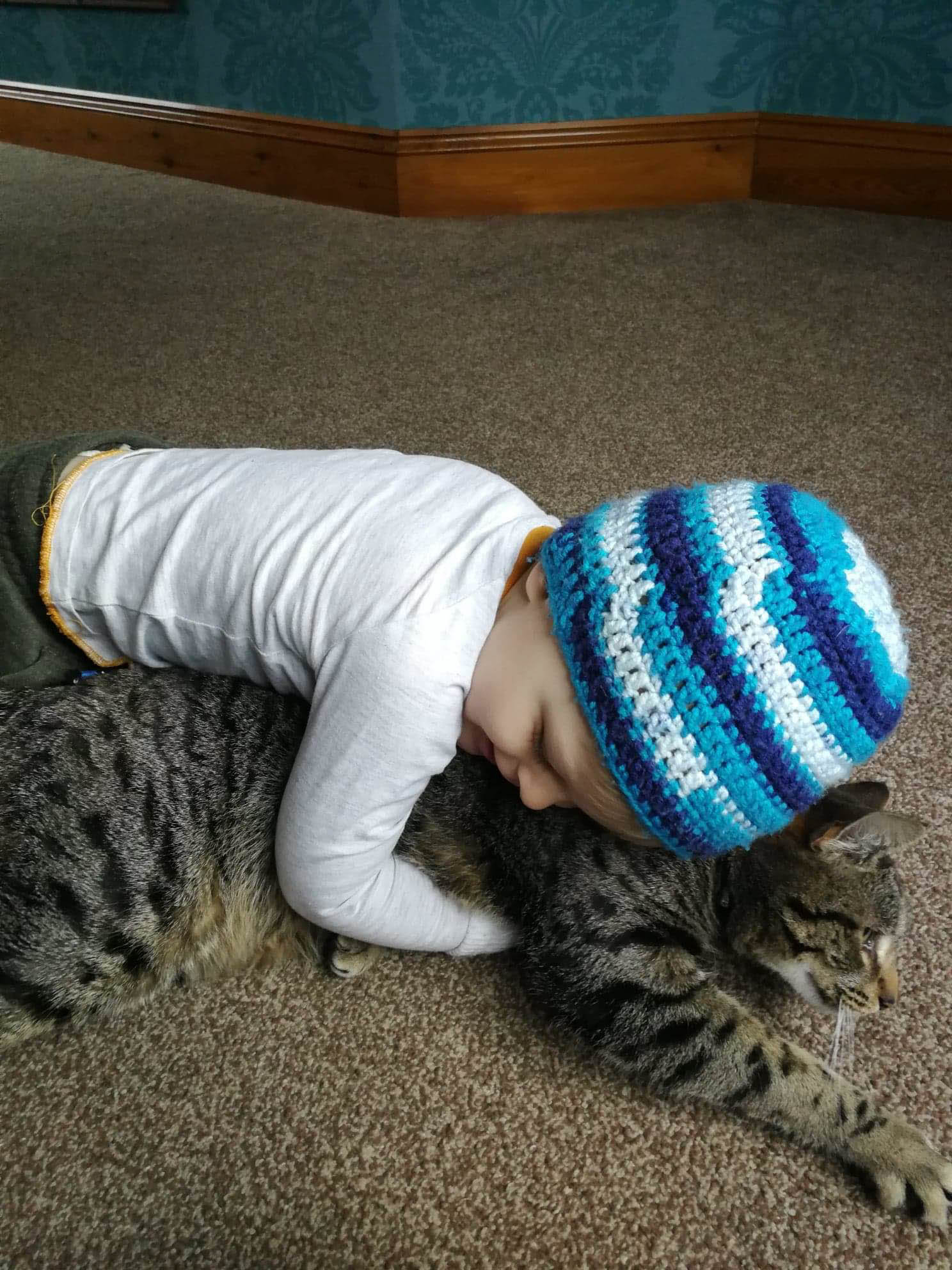 An ambulance took mum and son to hospital, while James, who was out on a bike ride, raced home after getting a call from paramedics.

He said: "I was trying to get back as fast as possible, panicking all the way. By the time I got back the police were there.

"I was in absolute shock to be honest, as I didn't know what the full extent of his injuries were and whose dog had done it and how."

When James arrived back at their block of flats, his neighbours presented him with a discarded piece of his son's scalp they had found on the floor by his front door.

They had stored the 8 x 5 cm chunk on ice in a pink glittery lunchbox, and James raced with it to the hospital so the surgeons could salvage as much of his son's head as possible.

The toddler didn't leave the hospital until March 26 and he underwent an operation to reattach the skin to his scalp and had a skin graft.

He also had the two puncture wounds in his lower back treated.

The dog unit removed the one-year-old Akita from the flat to be destroyed.

A spokesperson for Staffordshire Police said: "Police were called at 8.20am on Monday 22 March to an address in Wombourne following reports of an unruly dog.

"Officers attended the property on Elder Grove where a two-year-old boy was reported as being bitten by the animal.

"The child sustained bite injuries to his head and back from the 12-month-old American Akita dog in the communal area of a block of flats.

"The dog, which was unknown to the child and his parents, was secured by officers at the scene and the owner later agreed for the animal to be seized.

"The child was taken to Birmingham Children’s Hospital where he underwent surgery.