Brett Sutton says this is ‘key’ to fighting COVID-19

Professor Brett Sutton said better awareness about ventilation and airflow would help reduce the long-term impacts of COVID-19 and other infectious diseases.

Sutton said there was “a lot of room to move” on improvements that could make a considerable difference to the number of cases, deaths and longer-term COVID-19 side effects. 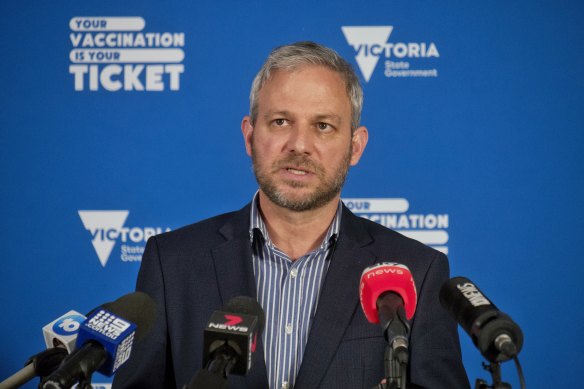 “It’s pretty clear that it’s probably 0.5 to 1 per cent [of cases that result in] disabling long COVID symptoms, who are effectively out of the workforce. That’s where ventilation is going to be able to make an impact,” he said.

“It’s one of the key things. I think it’s probably on a par with increased vaccination, fourth dose and third dose vaccination coverage.”

Sutton recently fronted two short videos, one for the public and one for business, warning that the risk of COVID-19 spreading in crowded indoor spaces was much higher than outdoors.

In many instances, Sutton said improving indoor ventilation might be as simple as opening doors and windows, allowing fresh air to flow from one side of a space to the other, and reducing the number of people gathering. 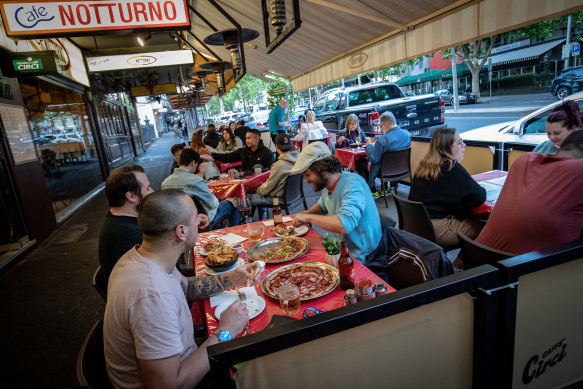 Hospitality venues pose some of the biggest risks, but eating outdoors could make all the difference, Brett Sutton says.Credit:Getty Images

Ceiling or pedestal fans can help push fresh air from outside, settings of air-conditioning can be changed to bring in air from outside and in some places it might be possible to make building changes, opening windows for example, that have been previously sealed shut.

Portable HEPA air filters have been widely installed in Victorian schools, and Sutton revealed that they had also been deployed to aged care facilities during outbreaks, where the state has jurisdiction.

But he says more could be done in the aged care sector, which has recorded 30 per cent of the nation’s COVID-19 deaths, saying many facilities had been built when insulation from the heat and cold was the main concern, meaning there was poor natural ventilation.

“We’ve clearly raised that with the aged care sector to do what they can, but it’s going to be a long-term project to address that, [the] same with the disability sector for that matter.”

Associate Professor in atmospheric chemistry at the University of Melbourne Robyn Schofield said COVID-19 could stay in the air for three hours indoors, but there were other reasons to ventilate too, including making sure carbon dioxide didn’t build up, affecting people’s concentration.

“Ventilation was an issue before the pandemic, the pandemic’s highlighted actually how bad it is.”

The Victorian government has created guides to improve ventilation in cafes and restaurants, pubs and clubs, function spaces, shopping malls, kitchen and food preparation areas, foyers, lunchrooms, boardrooms and a number of other workspaces.

Grants are also available for small businesses that deal with the public to improve their building ventilation, and possibly help with an expert assessment, but Sutton said people might find after going through one of the self-assessment guides, they were doing enough.

He said people should consider how much natural ventilation already existed, how many people gather in the space and for how long, and what activity was happening there.

“Is it silent, which is lowest risk, or talking, which is a step up, or shouting, screaming [or] singing which is a next level up, and exertion, which is also up there as well,” he said. “That’s why gyms and cafes and hospo and pubs and clubs tend to fall into the highest-risk category because they have more people, tend to be enclosed … and have those activities that generate a lot more aerosols.”