Rishworth, who has also vowed to broaden the 1800 RESPECT phone line to include video conferencing and text messaging, said the move was an “important step” to ensure people experiencing sexual harassment and assault in the workplace could get an immediate hotline to call for help. 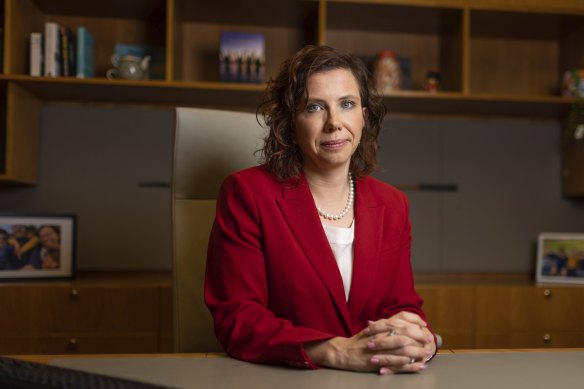 Social Services Minister Amanda Rishworth says the 1800 Respect Line should be expanded to victims of sexual harassment in the workplace. Credit:Alex Ellinghausen

In a wide-ranging interview with The Sun-Herald and The Sunday Age, her first since assuming the social services portfolio, Rishworth made a number of other significant commitments including:

The expansion of the 1800 RESPECT line follows a key recommendation from the Human Rights Commission’s landmark workplace sexual harassment inquiry in 2020.

The change technically came in on July 1, but Rishworth held off on formally announcing the launch because she wanted to ensure the services and counsellors were able to field the additional calls about workplace sexual harassment.

Rishworth said she wanted to now expand the hotline to video conferencing and text messaging by July next year, so that more vulnerable Australians would feel comfortable accessing the service.

“We do want to look at how we make sure that 1800 RESPECT keeps up with modern times,” she told The Sun-Herald and The Sunday Age.

“And so one of the other elements we’re exploring is how we provide both SMS support and video conferencing for those that might want a more personalised response or a different type of response.

Asked whether that would include expanding the service to encrypted applications, such as WhatsApp and Signal, Rishworth said: “We’ll be exploring a whole range of different options about how women might be able to use different types of technology to actually access and get support.”

With Australia having higher gambling losses than any other country on a per capita basis at $1276 per year, Rishworth also committed to cracking down on online gambling through three significant reforms before the end of the financial year.

This will include a requirement for online wagering companies to adopt “consistent messaging” about the harm of gambling in all of their advertisements. The other two measures will be compulsory training for staff in responsible gambling, and a national self-exclusion register to allow individuals to exclude themselves from all online gambling services.

The move will complete a 10-point plan agreed to between the states, territories and the Commonwealth in 2018.

In her first two weeks of parliament as minister, Rishworth has introduced legislation to phase out the cashless debit card over the next six months and create paid domestic violence leave.

The government’s move to scrap the cashless debit card – which quarantines up to 80 per cent of a person’s welfare payment onto a card that can’t be used to withdraw cash – was widely welcomed by the social services sector. But the move was slammed by Opposition Leader Peter Dutton who claimed it would lead to higher rates of domestic violence and assault in Indigenous communities and appealed to a “inner-city woke audience”.

But Rishworth said the evidence for the card’s effectiveness “just isn’t there to show that the cashless debit card actually did what it was intended to do”.

Rishworth promised that issues with phasing out the measure – such as the fact that thousands of people have connected their cashless debit card to “buy now, pay later schemes” and rental deductions – would be sorted out within the next six months.

“We will be looking at … both the technological aspects of the Basics Card and how it’s applied to communities,” she said. “But that will take some time as we first deal with the cashless debit card.”

During the election campaign then-opposition leader Anthony Albanese dropped plans to review the JobSeeker rate despite long-standing questions over whether Australians could live on the base rate of $46 per day.

But Rishworth said Albanese’s commitment was to “take each budget cycle as it comes” and there would be no hike in the October budget.

Asked whether this meant the government could raise JobSeeker within this term of parliament, Rishworth said: “The prime minister said ‘in the first budget’, and that is what my focus is on at the moment.”

Rishworth also flagged more measures to tackle domestic violence, supporting more women to be able to go back to work and the development of a national strategy for early childhood learning along with Minister for Early Childhood Education Anne Aly.

“I’m very keen to get a National Early Years Strategy for Little Children,” she said. “Most states and territories have a strategy on the early years and the Commonwealth doesn’t.”