Burning down the house! British CEO buys $1.5M Nashville mansion completely gutted by fire after viral listing showed it engulfed in flames – and plans to document its restoration

A British entrepreneur has taken on the task of restoring a stately Tennessee mansion to its former glory, less than six months after a blaze left the local fire chief referring to it as a ‘total loss.’

Mike Thakur, a Texas CEO originally from the UK, made his announcement in a YouTube video titled I Bought a Burned Down Mansion! that showed him and his family touring the property and surveying the damage.

Days earlier, the Zillow listing for the mansion went viral as the pictures promoting the property showed the fire engulfing the home. The listing also refers to the mansion as a ‘total loss’ and said it was being sold ‘as is.’

The asking price for the five acre home was $1.5 million but the fee that Thakur paid was undisclosed. 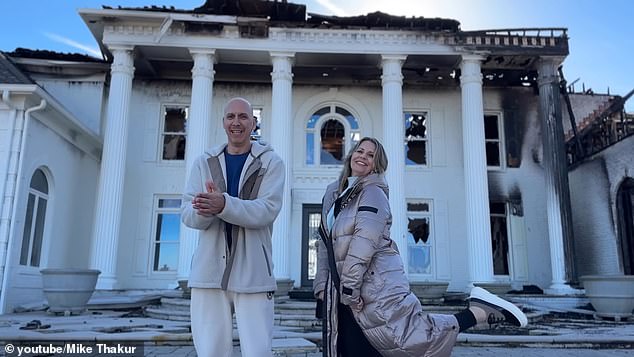 The roof caved in before firefighters could put out the fire. The blaze started after a construction worker reported an explosion

Thakur said that the renovations done on the mansion will be documented in a YouTube series, which will feature his wife, Linda, and their three children, Troy, Chloe and Zak. The vlog will launch in March.

A Christian entrepreneur, Thakur published his own book on his passion for Jesus as well as his ‘unique understanding and practical application of biblical principles’ in April 2022.

He described the book saying: ‘This book is for Christian Business Owners, Entrepreneurs, & anyone else who sees the world and senses God’s heart pulling them to touch it with His love.’

According to his official website, Thakur is also behind a charitable foundation named ft5k aka Feed the Five Thousand. The charity works to help build schools in Uganda, provide shelter to children in India and feed kids in the US. 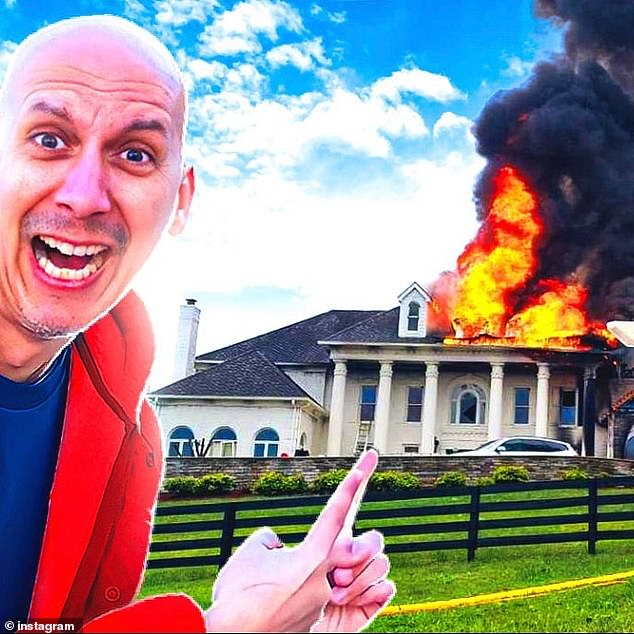 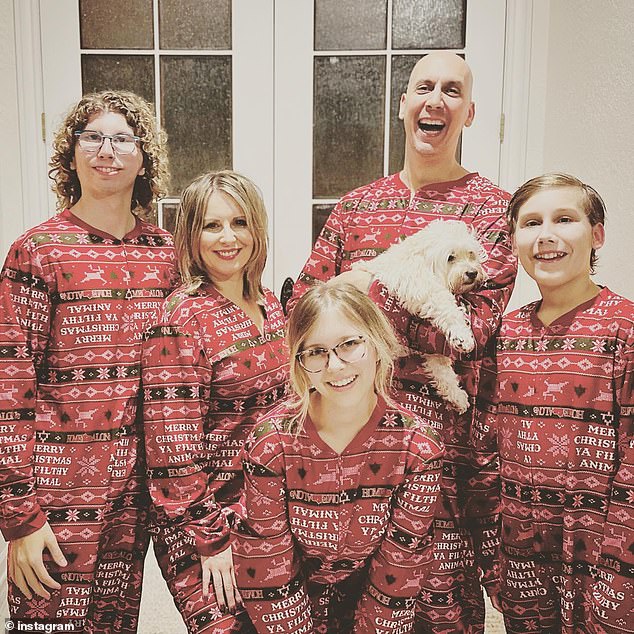 Thakur pictured with his family during the Holiday season 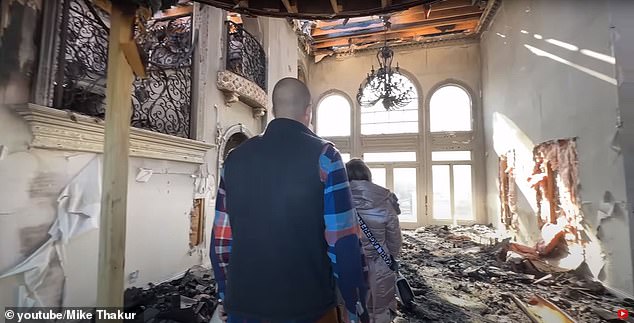 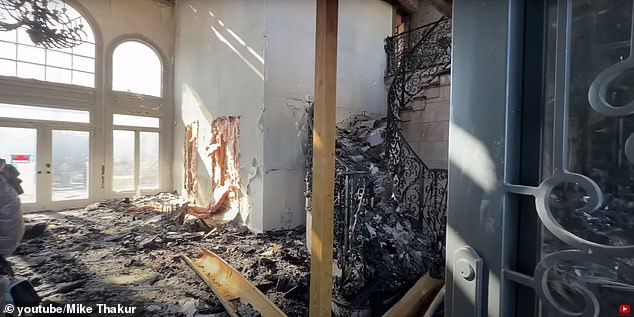 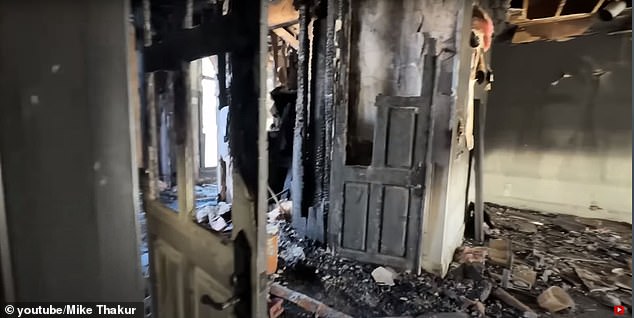 The listing price for the five acre home was $1.5 million but the price that Thakur paid was undisclosed

In a press release surrounding the purchase of the Nashville home, Thakur is ‘hailed as one of Houston’s Most Admired CEOS’ and as a ‘Guinness World Record participant.’

According to podcast production company Spark Media, in 2020 Thakur participated in a Guinness World Record attempt to create in the largest online podcast conference ever.

In addition, he’s called a ‘wildly popular content creator, entrepreneur, and impact chaser from Texas,’ in the press release promoting his purchase of the home. Thakur has 1.8K subscribers YouTube subscribers. 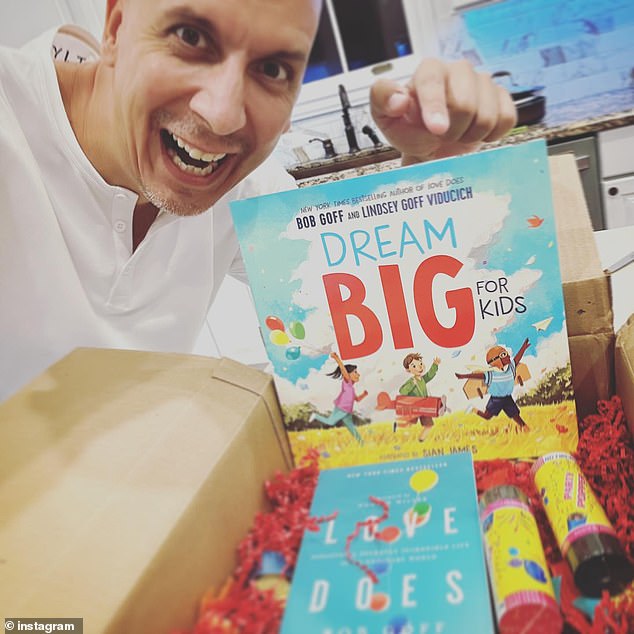 A Christian entrepreneur, Thakur published his own book on his passion for Jesus as well as his ‘unique understanding and practical application of biblical principles’ in April 2022 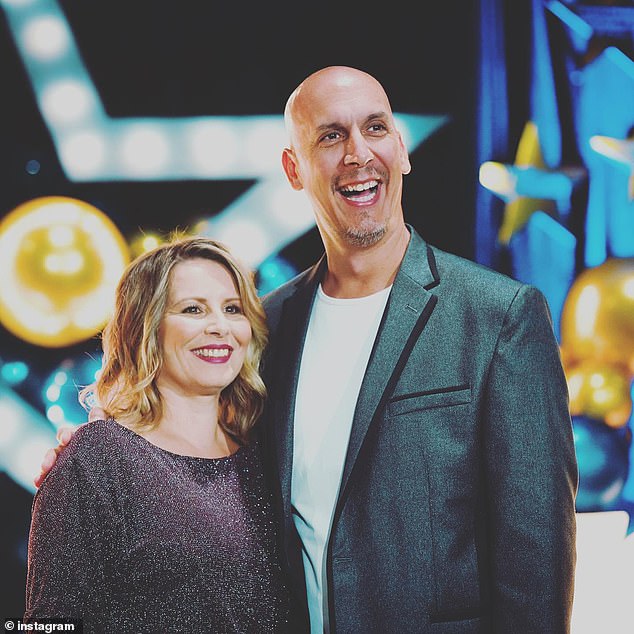 The release says that Thakur was the co-founder of an Internet consulting company with ‘sales that produced almost $100 million for an $8b organization.’

It also says that Thakur was formerly the chief operating officer of the ‘Secret Service for Billionaires.’

On his LinkedIn page, Thakur says that he was the COO at The Guidry Group between 2011 and 2015.

The company says that it is a ‘global leader for kidnap and ransom resolution, security services, and crisis response/management with experience in 148 countries,’ on their website.

Thakur does not list any other job prior his time at The Guidry Group. His page does say that he is the CEO of The Work Lodge, a provider of co-working spaces in Houston.

One online bio says that Thakur moved his family to the US in order to ‘pursue work in the ‘non-profit arena, spending several years giving back through multiple non-profits and local churches.’

Thakur hails from Rochdale, in the northwest of England. According to a newspaper announcement, he and Linda married in September 1994. The announcement notes that the pair were both students at Bible College at the time of their nuptials.

The Franklin, Tennessee, mansion went up in flames in September and is now being sold ‘as is’ for $1.5million

Not all was lost, the guest house (pictured) was untouched by the fire

The fire was started during renovations in the home’s library when a paint sprayer ignited the fumes left from lacquer paint.

A guest house connected to the house was undamaged.

Speaking to Axios when the listing went viral, former owner Paula Duvall said: ‘We had no idea this would create such a buzz. We were simply trying to be transparent about the history of the home.’

The viral listing began with the words: ‘Tragic total loss by fire of a classic mansion!’

The home was formerly owned by a couple Danny Duvall and Paula Duvall who sank thousands into the property as part of a major restoration effort.

Danny told the New York Post: ‘The photo was taken just moments after we arrived at the scene … I stood there weeping.’

Speaking about Thakur, Danny said: ‘The new family plans to restore the home to all of its original glory. I am thrilled to know that our home will soon be reborn and new life will rise out of our devastating flames.’

Thakur told WSMV: ‘We’re comfortable with what we paid. Of course, you always want it for less, right?’

He told the station that he was first sent the listing by his wife and that his family had a trip to Nashville planned anyway, so they made an appointment to view the mansion.

Thakur said that he didn’t feel that the house was a total loss and added that there was more damage done by water than by fire.

The British-native said that his plan has always been to have a home where his kids could grow up and also live on when they become adults.

He added: ‘A house like this gives us the opportunity to build in a way that makes this possible, and the idea of salvaging what we can and reusing those pieces to rebuild something so beautiful just felt like the right thing to do.’