Bruce Springsteen busted for DWI, reckless driving back in November

REVEALED: Bruce Springsteen was arrested for DWI and reckless driving in his home state of New Jersey back in November – months before his Super Bowl ad for Jeep ran

Bruce Springsteen is facing legal trouble after he was busted for a DWI and reckless driving back in his home state of New Jersey late last year, authorities have revealed.

Officials with the National Park Service (NPS) confirmed to DailyMail.com that the Thunder Road singer, 71, was arrested at Gateway National Recreation Area in Sandy Hook, New Jersey, on November 14, 2020.

Springsteen was charged with driving while intoxicated, reckless driving and consuming alcohol in a closed area.

The rock legend was ‘cooperative throughout the process’, NPS spokesperson Brenda Ling said. No further details have yet been released.

Bruce Springsteen is facing legal trouble after he was busted for a DWI and reckless driving back in his home state of New Jersey late last year, it has now been revealed

According to TMZ, this is Springsteen’s first known arrest for DWI.

The singer is due to appear in court in the coming weeks, but a specific date has not been revealed.

Springsteen’s publicist has not yet returned a DailyMail.com request for comment on the matter.

News of his arrest comes in the wake of a different first for the performer, having starred in his first ever product-endorsement in a Super Bowl ad for Jeep, which aired on Sunday.

The two-minute ad featured Springsteen driving through Lebanon, Kansas, near the geographic center of the country, in a 1980 Jeep CJ-5 and preaching calls for unity.

‘It’s no secret the middle has been a hard place to get to lately, between red and blue, servant and citizen, freedom and fear,’ Springsteen intones, adding ‘we need the middle.’

‘Fear has never been the best of who we are,’ the Boss continues. ‘We just have to remember the very soil we stand on is common ground. So we can get there. We can make it to the mountaintop, through the desert . . . and we will cross this divide.’

The ad then ends with a dedication: ‘To the ReUnited States of America.’ 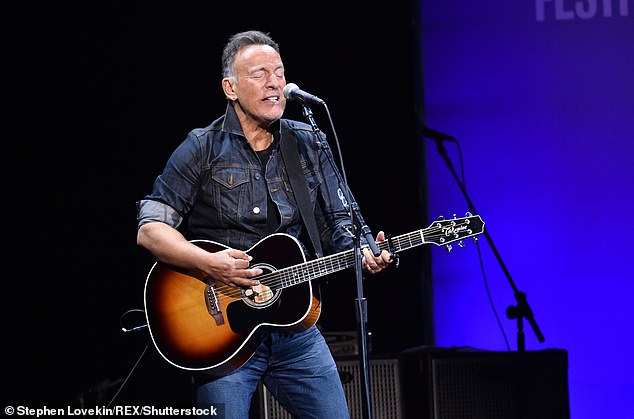 According to TMZ, this is Springsteen’s first known arrest for DWI. He is due to appear in court in the coming weeks

Springsteen’s longtime manager, Jon Landau, later revealed the decision for him to star in the commercial was ‘spontaneous.’

Although his first ad, Landau told Rolling Stone, the hit-maker had a heavy hand in the commercial’s artist direction, explaining its script was ‘substantially revised by Springsteen’, adding that he also participated in the edit of the footage.

Landau said Springsteen ‘controlled every second of what you see and hear, and that’s why it feels so personal.’

It’s unclear whether Jeep were aware of Springsteen’s arrest at the time of production.

A request for comment on the matter has been left with the car manufacturer’s parent company, Stellantis.

Earlier this month, Springsteen also performed at Joe Biden’s inauguration with a rendition of ‘Land of Hope and Dreams’ at the Lincoln Memorial.

Springsteen opened the evening’s Celebrating America event, which was hosted by Tom Hanks.

Bruce, busted, D, for, Springsteen
You may also like: