Israeli ministers have said it is time for the country to support Ukraine with arms shipments after US officials claimed on Sunday that Iran has secretly agreed to supply Russia with surface-to-surface missiles.

The Islamic Republic has been sending drones along with Iranian troops into Ukraine to operate them, siding with Russia in its bloody invasion.

Israeli Diaspora Affairs Minister Nachman Shai wrote on Twitter: ‘There is no longer any doubt where Israel should stand in this bloody conflict. The time has come for Ukraine to receive military aid as well, just as the USA and NATO countries provide.’

His comments came after the Washington Post  quoted US sources on Sunday claiming Iran is stepping up its arms supply to Russia.

A shipment of Fateh-110 and Zolfaghar missiles, weapons capable of striking targets at distances of 300 and 700 kilometers respectively, are set to be delivered for Putin’s troops to use against targets in Ukraine — where Russian soldiers have been targeting civilians with missile strikes.

Moscow has been searching for allies for its nearly eight-month war in Ukraine after invading the country on February 25, only to have its nose bloodied by fierce Ukrainian resistance and a subsequent counter-attack. 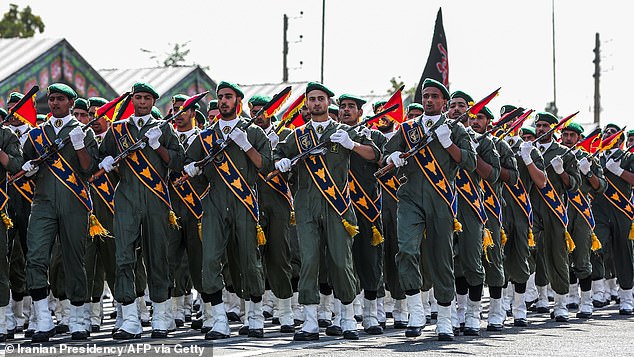 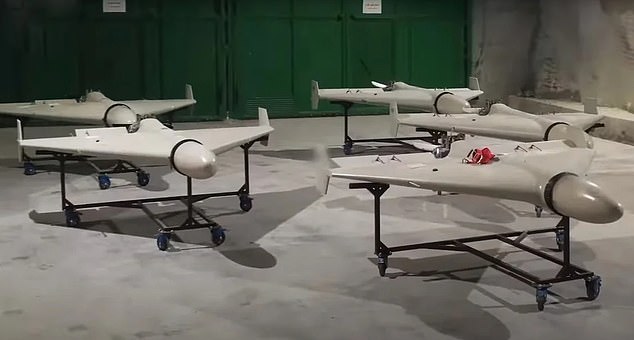 Iran in July 2022 concluded an agreement on the supply of several types of drones to the Russian Federation, including the Shahed 136, pictured 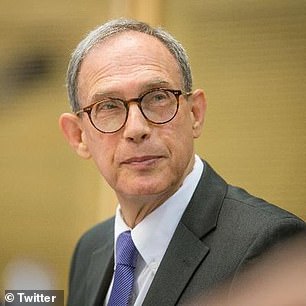 The news comes as Ukrainian forces mounted another counterattack on Russian occupiers in the south of the country, with the Armed Forces of Ukraine reportedly requesting a blackout of videos, photos, with regards to Kherson — the largest Ukrainian city taken by Russian forces during the conflict — to stop Putin’s forces from locating Ukrainian troop movements.

Now, Vladimir Putin has announced the end to mobilisation only two months after starting forced military conscription, with more Russians ending up fleeing the country than fighting in the army.

The Russian president has also stepped up attacks on civilians in Ukrainian cities, with analysis pointing to increased Russian anxiety about its home front.

Turning to other despot regimes, Putin has reached out to countries as far flung as North Korea and Syria in hopes of winning the war.

But despite western sanctions and a coalition of countries working to isolate Russia, Iran has remained its steadfast ally, with US intelligence identifying invading Russian forces using Iranian munitions — despite denials from Iran.

Russia allegedly repainted the weapons and gave them Russian names.

is a short-range, road-mobile, solid-propellant ballistic missile. It is most likely a modified version of the unguided Zelzal-2, with the addition of control and guidance systems.

While the program is based in Iran, the missile is believed to incorporate components from Chinese contractors.

In 2006, the US Department of Treasury accused Chinese firm Great Wall Industry and its partners of playing a lead role in the development of the Fateh missile system.

Iran has launched several Fateh missiles, as well as longer-range variants in military operations since 2017.

Houthi fighters in Yemen, backed by Iran, have also used the weapons against oil refineries and other civilian targets in neighboring Gulf countries.

Iran has also reportedly employed both missile types against targets in Iraq.

The 12-mile bridge holds importance as a symbol of Moscow’s power and carries military supplies from Crimea, which Russia annexed from Ukraine in 2014.

Iran is preparing new deliveries of Shahed-136s to Russia, as well as Mohajer-6s drones.

The speaker of Russia’s lower house of parliament said on Thursday Russian forces struck more than 70 energy facilities in Ukraine this week.

He threatened an ‘even tougher’ response to future attacks by ‘the Kyiv regime’, although Ukraine has not claimed responsibility for the bridge bombing.

On the same day, France pledged an air defense systems to protect Ukrainian cities against drone strikes, as well as an expanded training program for Ukrainian soldiers.

Up to 2,000 Ukrainian soldiers will be embedded with military units in France, rotating through for several weeks of combat training, Defense Minister Sébastien Lecornu, said in an interview published in Le Parisien.

‘We are noting the fact that the war, alas, will last,’ the newspaper quoted the minister as saying. ‘A new generation of soldiers must also be trained, to last the distance.’

France had previously trained Ukrainian artillery troops to use Caesar self-propelled howitzers it has supplied.

The expanded training that France is now offering is ‘a very important step,’ the minister said. ‘We are changing the scale.’

The minister said Crotale air defense missile batteries that France is preparing to send to Ukraine ‘will be particularly useful in the fight against drones and against aerial bombardments.’

The French defense budget for 2023 will climb to its highest levels since World War II, at €44billion (£38billion). 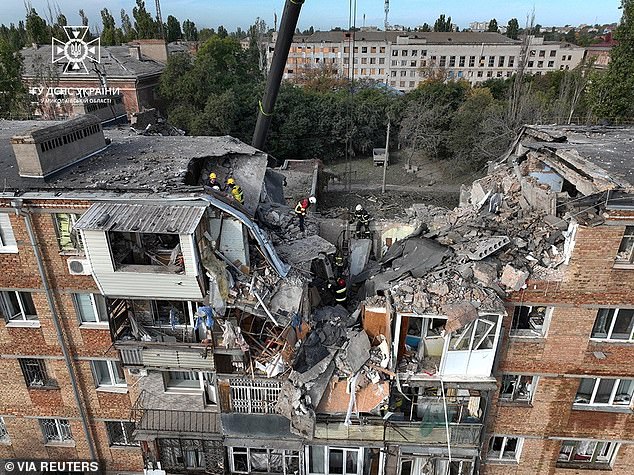 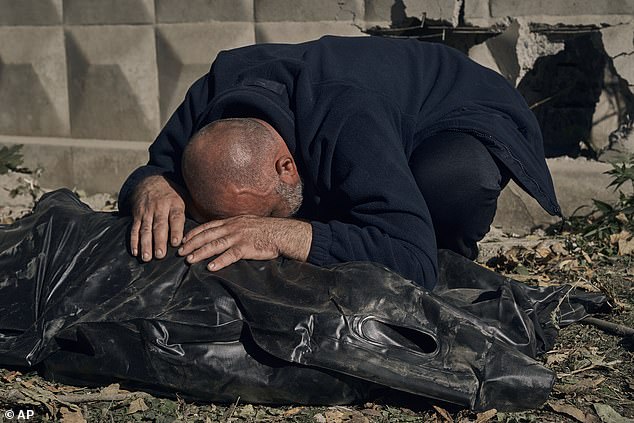 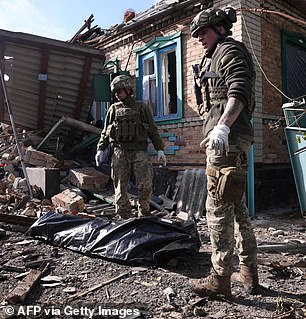 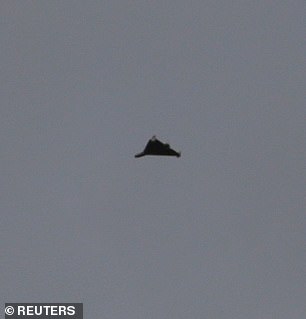 With a range of more than 600 miles, the explosive-laden Iranian Shahed-136 UAVs can ‘loiter’ above potential targets for hours before being slammed directly into enemy soldiers, vehicles or buildings from above – causing an explosion.

Reports coming out of Ukraine suggest the drones have inflicted serious damage to Kyiv’s forces, as well as Ukrainian infrastructure.

Ukrainians who have witnessed attacks by the drones say they make a recognisable noise, and have described them as sounding like ‘motorbikes’ in the air, while some soldiers have taken to calling it ‘the flying lawnmower’.

While the drones can be devastating to their targets, soldiers have said they a vulnerable to small arms fire. On Saturday, the General Staff of the Armed forces of Ukraine released a video on Facebook showing a smoking wreckage that it claimed to be one of the drones. The post said it had been shot down by a machine gun. 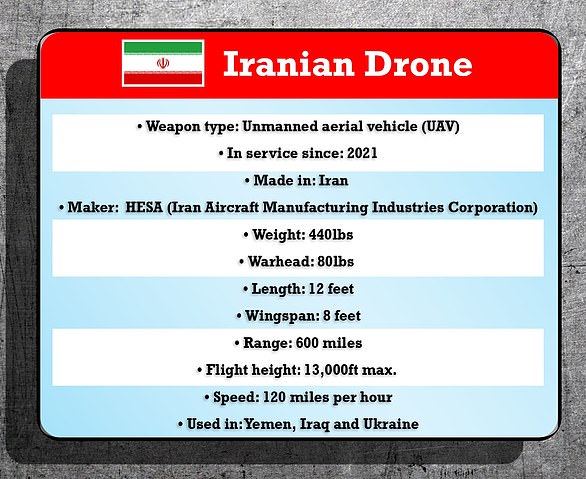 Pictured: The Iranian drone has been in service since 2021 and weighs 440lbs. On top of that it is 12ft long and 8ft wide

‘It’s not a high-tech conveyor-belt production like the [Turkish-made] Bayraktar or American and Israeli [unmanned aerial vehicles],’ he added.

Ukrainian residents described the drone attacks to RFE. ‘You can hear the roar. First, I just hear them, but then I saw one fly by and then explode,’ one man said.

Another said: ‘There was a buzz that woke me up. I remember thinking: “What’s that?” The sound was approaching and then there was an explosion near the house.’

According to reports, the first recorded use of the drones was in Yemen in Houthi-controlled areas. Now, Iran is reported to have sold hundreds of the drones to Russia.

Tehran has denied that it is selling the deadly munitions to the Kremlin, but there is mounting evidence that Moscow’s armies have been using them since September against the Ukrainian military to make up for a lack of artillery firepower.

Ukrainian military officials say the drones are cheaper and less sophisticated than cruise missiles – but can have a similarly devastating affect on their target.

There are concerns among Ukraine’s military leaders that if they are not supplied an effective counter-measure, the drones could destroy their western-supplied artillery, which have successfully been used to push Russian forces back east.

The almost 12-foot long Shahed 136 is designed with a delta-wing shape, with stabilising rudders at the top of the aircraft. The fuselage is at the centre of the drone and blended into the almost 4ft wings, giving it an elegant-looking shape.

The explosives are contained in the nose of the drone, as well as the technology that guides it to its targets for a precision strike. The engine, meanwhile, is found at the rear of the drone, and drives two bladed propellers.

It has been compared to an engine one would find on a lawnmower or a moped.

‘Its motor sounds like a [motorbike]. You can spot it when it’s a few kilometres away,’ a Ukrainian soldier named only as Magyar told RFE. 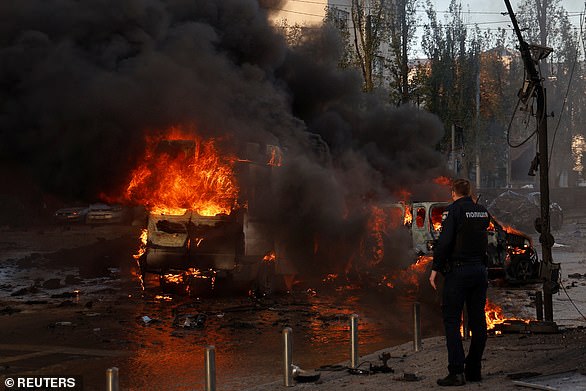 Kyiv said at 83 missiles or drones were launched against the country on Monday morning, striking the capital and several other cities, killing civilians in the process. Pictured: Cars are seen on fire after Russia’s missile attack in Kyiv, Ukraine October 10

‘That’s my advice to the military. They fly low and are slow, so you can shoot them down,’ he said, noting the drones are usually used against larger targets. ‘They carry such a load of explosives that it doesn’t make sense to use them against infantry.’

Overall, the drone weighs 440lbs, and can fly at speeds of almost 120mph.

In order to overwhelm air defences, several of the drones (batches of five and above) are launched at once from the same rack. They are fired almost horizontally with rocket-launch assistance.

The rocket is jettisoned on take-off, with the engine taking over once it is airbourne.

On Friday, Oleksandr Starukh – the regional governor of Zaporizhzhia – said such drones damaged to facilities in the city. On Wednesday, other Ukrainian officials said the drones were used to target the town of Bila Tserkva – 50 miles south of Kyiv.

The attacks destroyed several buildings in the town, Newsweek reported.

The weapons are unlikely to significantly affect the course of the war, the Washington-based Institute for the Study of War said following last week’s strikes.

‘They have used many drones against civilian targets in rear areas, likely hoping to generate non-linear effects through terror. Such efforts are not succeeding,’ analysts at the think tank wrote.

Drones have played a significant part in the war in Ukraine so far. The United States has supplied Ukraine’s military with switchblade drones, while Kyiv has also deployed the Turkish-made Bayraktar TB2 – that fire guided missiles – to great effect.