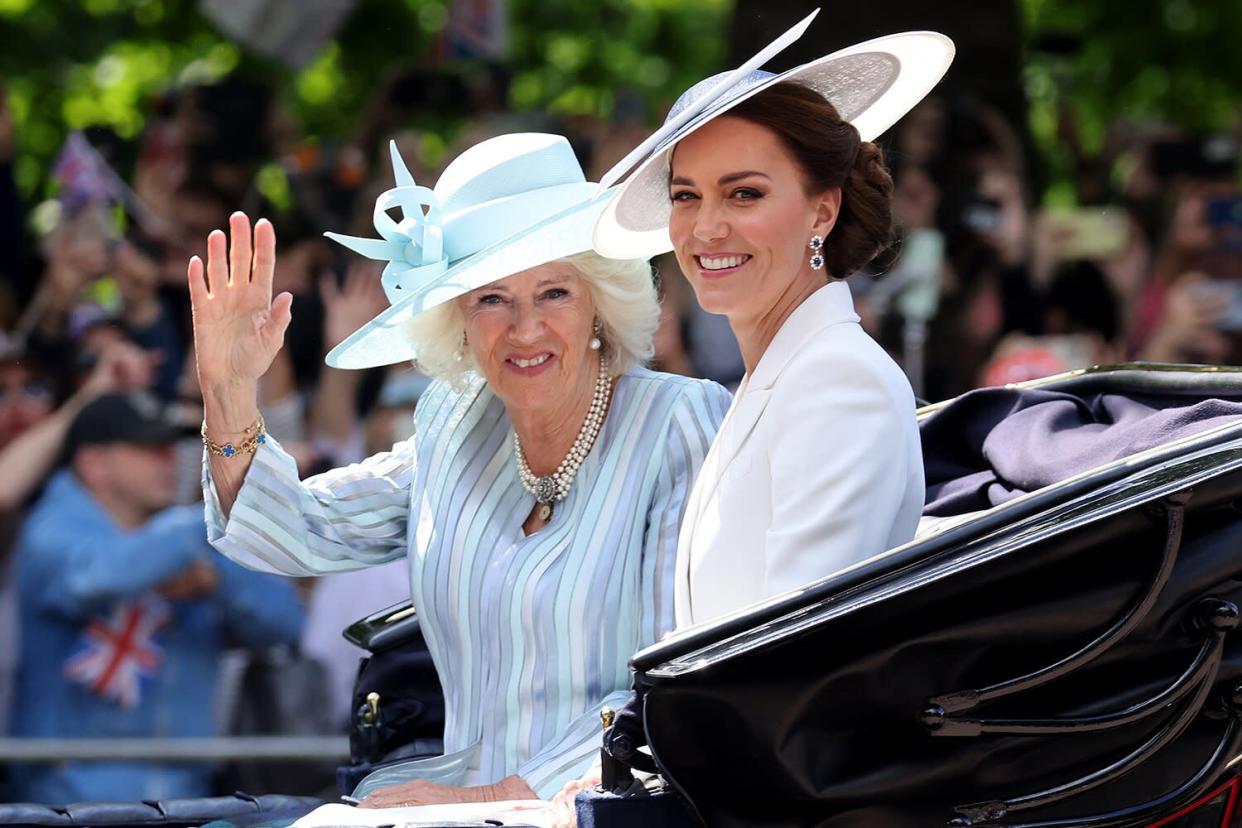 Camilla, Duchess of Cornwall is revealing what it was like to pose for a magazine cover — with Kate Middleton as her photographer!

In a preview of an upcoming ITV special, Camilla discussed which of Kate’s photos should earn the cover spot for Country Life. Camilla guest-edited the July issue to mark her 75th birthday, which is on Sunday, and the magazine’s 125th anniversary.

“She did very good pictures, and she does it sort of naturally. We had a lot of fun doing it,” Camilla said in the clip.

The Duchess of Cornwall added, “It was very relaxed and, of course, very kind of the Duchess of Cambridge. She came with her camera and she’s an extremely good photographer. And it was all very casual — there wasn’t much hair and make-up. It was just done in the garden with a lot of laughs — it was a lovely way of doing it.”

The Duchess of Cornwall spoke about guest-editing @Countrylifemag for her 75th birthday and asked her stepdaughter-in-law, the Duchess of Cambridge, to take the cover photo.
Camilla said Kate does it “very naturally” and is “an extremely good photographer” 📸 @ITV Wednesday 9pm pic.twitter.com/UH8bVZ61bD

Camilla also shared that one particular photo had the seal of approval from Prince Charles — pointing to the final cover image, which shows her seated on a bench with a basket filled with pelargoniums.

When asked if she was happy with the final product, Camilla replied, “If I can get over the fact I’m looking at myself, I think that they’re very nice and I think they’re just what’s needed for Country Life.“

The shoot took place in the garden of Camilla’s home Raymill in Wiltshire, and it was Camilla’s idea to tap Kate as her photographer.

“She immediately replied, ‘Oh, I’d quite like Catherine to do it,’ ” Country Life editor Mark Hedges said, according to The Telegraph.

“I spent the next three or four minutes desperately racking my brains trying to think of a professional photographer called Catherine. Then suddenly I grasped what she meant — one of the most amazing things that could happen,” he continued. “I found it one of the easier things to nod my head at.”

In a behind-the-scenes image taken by Camilla’s country dresser Shona Williams, Kate goes to work with her camera, putting her eye through the lens to capture the shot.

Kate is often behind birthday portraits of her three children — Prince George, 8, Princess Charlotte, 7, and Prince Louis, 4 — and other family moments.

Can’t get enough of PEOPLE‘s Royals coverage? Sign up for our free Royals newsletter to get the latest updates on Kate Middleton, Meghan Markle and more

In a joint arrangement with Country Life magazine, The Australian Women’s Weekly also featured a photo of Camilla taken by Kate. In an exclusive photo, the Duchess of Cornwall smiles as she leans against a fence in the garden. (Camilla sported her go-to accessory — her FitBit! — for the occasion.)

During the interview, Camilla also reflected on her relationship with Prince Philip, who died in April 2021 at the age of 99.

“The Duke of Edinburgh was always a very good ear,” Camilla said. “He was a role model to me and a very good person to take advice from because he always told me what he thought.”

As a consort to his wife Queen Elizabeth, Prince Philip no doubt provided Camilla with an idea of her role when Prince Charles becomes monarch one day.