Give Anthony Albanese credit for this at the very least: his proposal to pay every Australian who gets fully vaccinated by December 1 $300 has got ordinary people talking and injected some real energy into a critical community debate about how to get the vaccination effort moving. 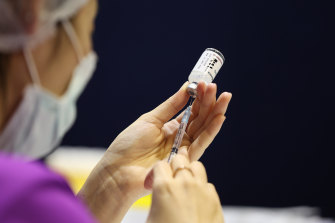 There need to be incentives to help encourage vaccine take-up in Australia. Credit:Getty

The Prime Minister and state and territory leaders offered the latest version of the “roadmap out” of COVID after national cabinet on Friday, with its 70 per cent and 80 per cent thresholds for greater freedoms, but these plans continue to be hampered by a refusal to set timelines and the patchwork nature of divided powers and responsibilities.

The refusal to set deadlines is defended by the PM, who says the virus journey can’t be predicted and keeps throwing up curveballs, yet you feel it is also so that he cannot be held politically responsible if timelines are not met. The risk is we continue to drift.

And no matter how much the PM says that getting vaccination rates past certain hurdles will result in more freedoms, it is a fact that the health rules – be it lockdown thresholds or introducing requirements to show proof of vaccination to be admitted to a sporting stadium – continue to be matters for state leaders, who have shown they will always do what they think is politically expedient in their own jurisdiction first.

Scott Morrison says it is an “insult to Australians” to suggest they be paid for doing the right thing and getting jabbed, adding that people know the vaccines are the ticket to a return to a more normal life.

But the strategy fleshed out yesterday, based on Doherty Institute modelling, requires a widespread and rapid take-up of vaccines by Australia’s young, who you’d think are more receptive than anyone to an immediate cash bonus.

Experts are divided on its merits. The Australian government’s Behavioural Economics Team said cash incentives might work if the amount paid was immediate and very high (more than 3000 euros, according to one experiment).

“But financial incentives also run the risk of increasing people’s risk perceptions if it is construed that people have to get ‘paid’ to get the vaccination,” it said, according to The Australian.

Queensland University of Technology professor Adrian Barnett, a mathematician, ran experiments in America with colleagues from Oxford and Vienna universities that showed that people across demographic groups responded more favourably to an offer of $100 cash than to the health of a vaccine, or a lottery.

The $300 payments would cost in the order of $5 billion to $6 billion, which Finance Minister Simon Birmingham tried to paint as unaffordable yesterday, but which pales into comparison against the billions that lockdowns cost weekly in both disrupted economic activity and extra taxpayer-funded income supports.

In reality, governments have used all manner of cash incentives over the years to nudge public behaviour, from baby bonuses, to lifetime private health insurance loadings, to no jab, no pay schemes to boost vaccination rates against childhood diseases. So this proposal hardly seems radical.

What is clear is that we are heading, in real world practice if not codified name, to a system of vaccination passports which will divide Australian society into the jabbed and unjabbed.

This is the trajectory Friday’s national cabinet agreement set us on, with the details to be filled in over the coming months, but it is also the way that corporate Australia is headed too.

Consider Qantas, which says evidence of vaccination will be required to board an international flight (a reality being driven as much by the policies of foreign nations) and the mining industry, which says certain high-value mine sites might be open only to vaccinated workers.

In WA, Police Commissioner Chris Dawson, in a bid to boost vaccine uptake among his officers, has told them they must soon wear a mask at all times when on duty if they decline to get fully vaccinated.

It is widely accepted that Australia’s rollout was woefully slow to begin and badly harmed by the ATAGI advice (and the manner of its announcement) on AstraZeneca and blood clot risk.

Though just 18 per cent of the population are fully vaccinated now the effort is finally gathering momentum and – humans seemingly being humans – appetite is strongest in areas where COVID outbreaks are present.

There is a cohort of over-60s who are hanging out for Pfizer rather than AstraZeneca (they will likely wait until October.)

But there are also those – and they are minority of unknown size but real – who are either disinclined to get the vaccine because they do not see the upside in their totally or relatively COVID-free part of Australia; or who will never get the vaccine because they believe them to be rushed, don’t trust the science or its communication, or are inclined towards conspiracy.

That cohort pose the biggest obstacle to the 80 per cent target and possibly even the 70 per cent target being met, and simply marginalising or isolating them with what Amnesty International has provocatively (but not inaccurately) termed “vaccine apartheid” is unlikely to change their minds.

In fact these attitudes will likely harden and radicalise the more these people perceive they are being forced into a corner or bullied.

Leaders must give careful thought to this problem because simply isolating the holdouts may imperil the new national targets, hold back the return to normal for the majority, and expose the health system to higher risk than the roadmap contemplates.

a, BAD, Cash, Idea, incentives, not
You may also like: