‘The only royal family he knows of is Jesus, Mary and Joseph’: Celtics coach Joe Muzzulla was left VERY unimpressed by Wills and Kate’s appearance at game where they were booed and blasted with chants ‘USA USA USA’

Boston Celtics Coach Joe Muzzulla was unimpressed with the Prince and Princess of Wales’ appearance at his team’s game, where they were booed and blasted with USA chants.

At an after-game press conference, Muzzulla, 34, was asked if he had a chance to meet the visiting Royal Family, to which he replied: ‘Jesus, Mary, and Joseph?’

When the reporter laughed and corrected him, he waved the question off, telling her hadn’t met the couple, who kicked off their American tour in Boston on Wednesday for the Earthshot Prize awards – a three-day event commemorating people who have made significant contributions to environmentalism.

‘Oh no, I did not [get to meet them]. I’m only familiar with one Royal Family, I’m not too familiar with [the British] one,’ he told reporters, despite being pictured standing right in front of them. 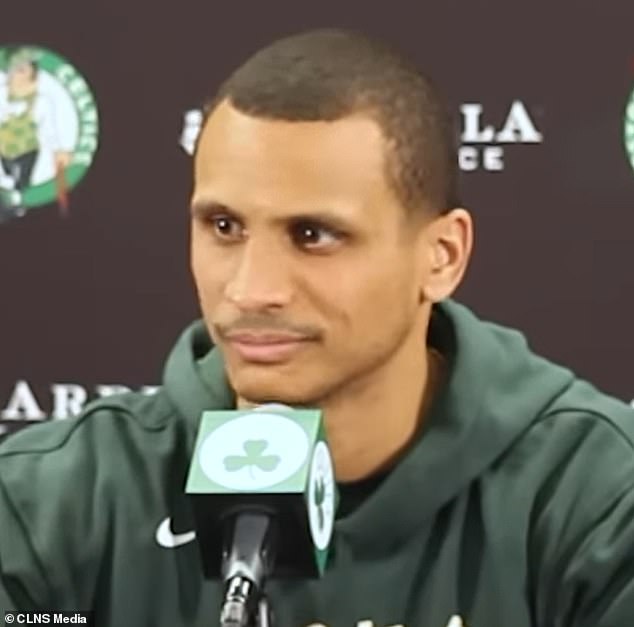 Boston Celtic Coach Joe Muzzulla, 34, was unimpressed with the Prince and Princess of Wales’ appearance at the game. When asked by a reporter if he had a chance to meet the Royals, he replied: ‘Jesus, Mary, and Joseph?’ 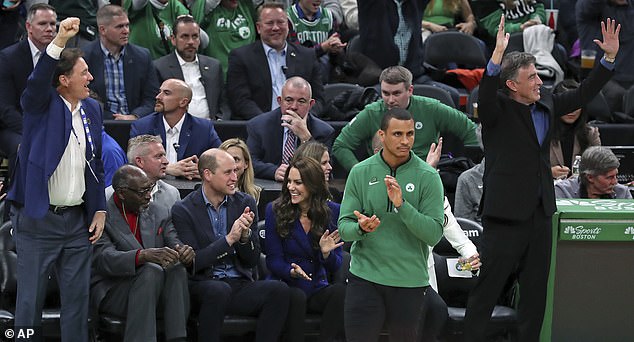 ‘I’m only familiar with one Royal Family, I’m not too familiar with [the British] one,’ he told reporters, despite being pictured standing right in front of them at the game

The Royal couple, whose attendance at the game wasn’t widely known until halftime when they were introduced, weren’t a large hit with the crowd or the home team.

As William and Kate sat courtside in the TD Garden stadium, they were introduced on the big screen, where they gave shy waves and smiles.

As the crowd realized who was in attendance, a few boos and a lot of USA chants began filling the stadium.

But the royal couple kept smiling and took photos with fans. They cheered on the high-scoring game as the packed crowd ramped up the atmosphere for the 17-time World Champions game against the Miami Heat.

After the game, Celtics guard Jaylen Brown highlighted how little he cared about playing in front of the Prince and Princess of Wales, by telling reporters: ‘It was just a regular game to me.’

However, not every American in attendance was unimpressed with the couple’s appearance.

Celtics co-owner Wyc Grousbeck was honored they were having so much fun that they stayed through the second half of the game, after originally being scheduled to leave at halftime.

‘They were going on 22 hours being up, and they didn’t want it to stop,’ Grousbeck said, according to the Boston Globe.

Grousbeck also said the couple didn’t understand what a three-pointer was until after he explained it to them.

Steve Pagliuca, the other co-owner, also called the couple ‘very down to earth’ and ‘very personable.’

‘They couldn’t have been better guests,’ Grousbeck continued. ‘They were super-nice people and they’re all about everybody else. They want to make sure everybody else is having a good time, and they’re really trying to make the world a better place.’ 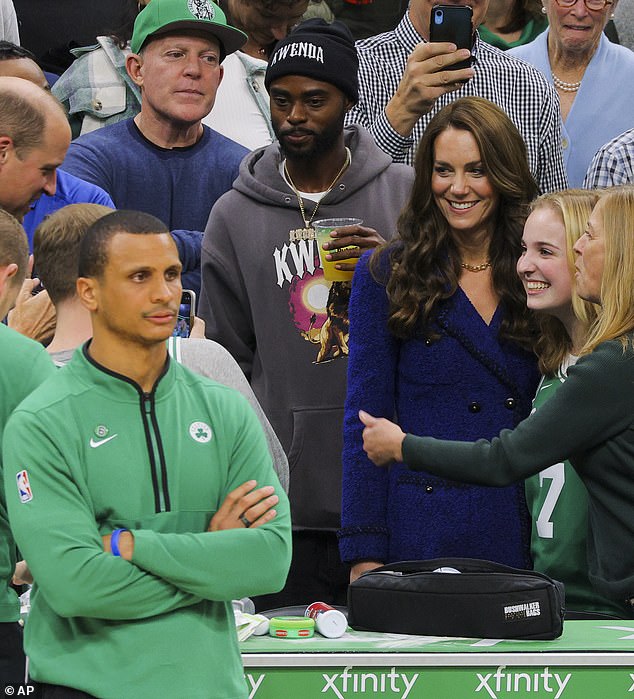 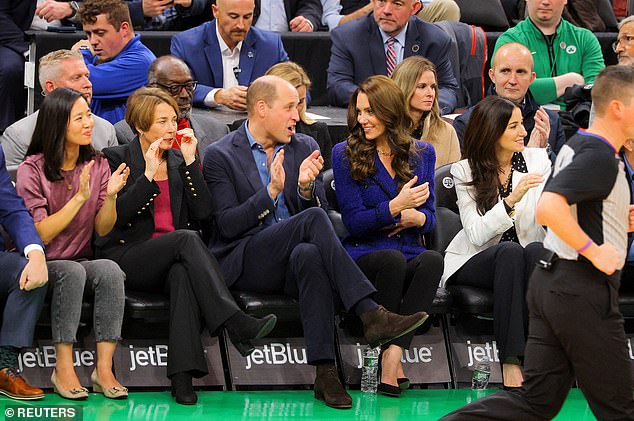 The Prince of Wales looked like he was enjoying himself as he cheered on the Boston Celtics, with Kate flashing him a smile 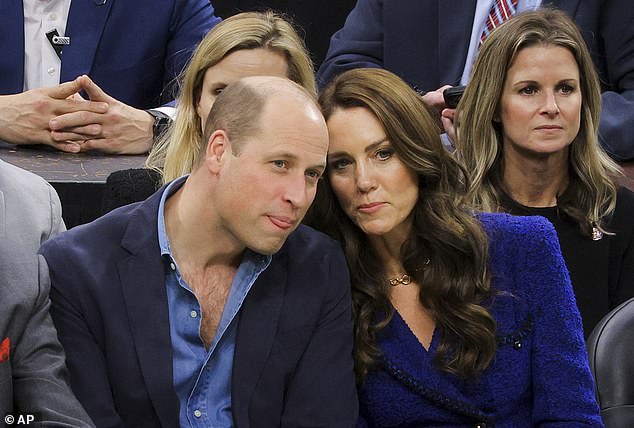 William and Kate (pictured at the game) attended the game as part of the first day of their American tour. William’s Earthshot Prize awards – a three-day event commemorating people who have made significant contributions to environmentalism – was mentioned at the game

A Royal fan, Kathryn Lehman, 32, and her friend Katie Grady, 34, spent $205 a piece on tickets after hearing rumors Wills and Kate would attend the game, hoping to get a chance to meet the Royals.

Lehman had previously met William when she was 11 and recounted the embarrassing moment she met the Prince to the Boston Globe, saying: ‘I just said: “Hi, I’m Kathryn, and I’m American.” Really embarrassing.’

Lehman also said she and Grady grew up watching the prince and princess’ love story and ‘were at the age where we could witness that entire love story and really appreciate it.’

‘We’re in our early 30s, and so we grew up with this vision of a fairytale, and Kate was someone who was a commoner and grew up super normal and married into the Royal Family,’ she told the Globe.

Before the game, the royals met members of the ‘Celtics family,’ including representatives of the Boston Celtics Shamrock Foundation, which provides grassroots programming and funding to local organizations serving at-risk or at-need populations.

Around the arena, digital advertising boards were lit up green to promote Prince William’s Earthshot awards, while spectators were treated to a promotional video ahead of the game. 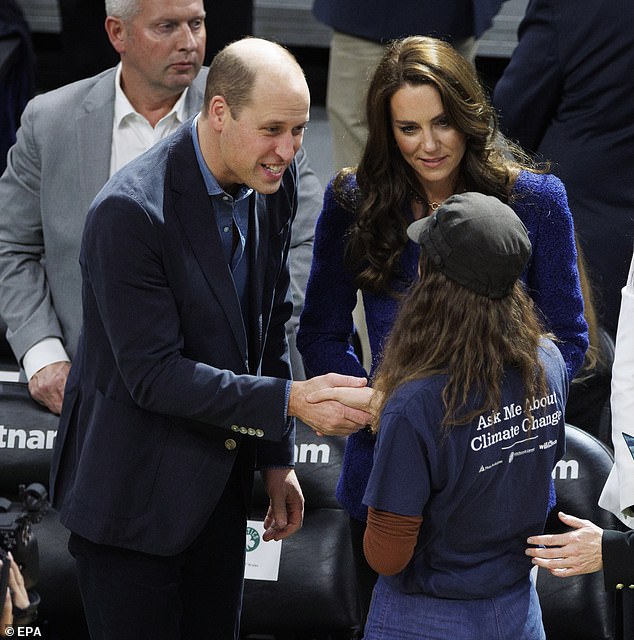 After the second quarter with the game tied 47 all, William and Kate watched as the Celtics honored their long-standing tradition of recognizing a ‘Hero Among Us,’ highlighting individuals working to positively impact the community.

Ollie Perrault, a 15-year-old climate activist from Easthampton, Massachusetts, got to meet the royal pair after being cheered by the local crowd for her work as a leading member of the Youth Climate Leadership Program.

She is now the founder and director of Youth Climate Action Now, committed to fighting for environmental justice, and working to get more young people involved in direct climate action.

The prince and princess arrived in Boston just hours after William’s godmother – an elderly staffer at Buckingham Palace – was accused of making racist remarks at an event hosted by Queen Consort Camilla, who has herself been accused of racist behavior.

The royal couple were at the opening ceremony of the Earthshot Awards hours before the basketball game.

US presidential envoy for the environment John Kerry and US Ambassador to Australia Caroline Kennedy had been due to meet the pair at the opening of the event but pulled out of planned appearances at the last minute.

A Royal spokesperson later told DailyMail.com that Kennedy pulled out of the Earthshot event due to weather-induced travel disruption and later met the Prince and Princess at the Boston Celtics game, where they were pictured shaking hands.

Kerry meanwhile was feeling unwell and hoped to meet William and Kate on Friday, the spokesperson said.