Chilling moment blood-soaked thug battered pensioner with a DRINKS CAN

Chilling moment blood-soaked thug battered pensioner, 70, with a DRINKS CAN in corner shop during stabbing spree that left 11 people injured

Chilling CCTV shows the moment a blood-soaked thug battered a pensioner in a corner shop during a stabbing spree that left 11 people injured.

Footage has now emerged showing one of the brutal attacks in Bedworth, Warwickshire where a 70-year-old man was smashed in the face with a drinks can in a newsagents. 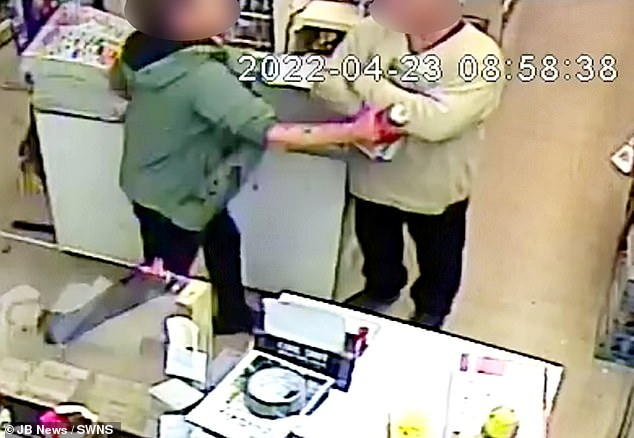 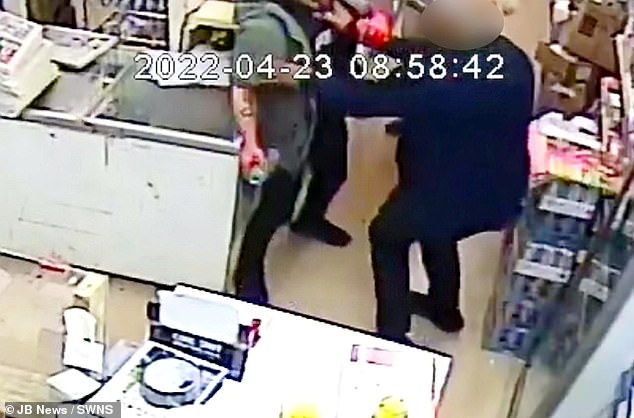 Footage has now emerged showing one of the brutal attacks in a newsagents where a 70-year-old man was smashed in the face with a drinks can in Bedworth, Warwickshire 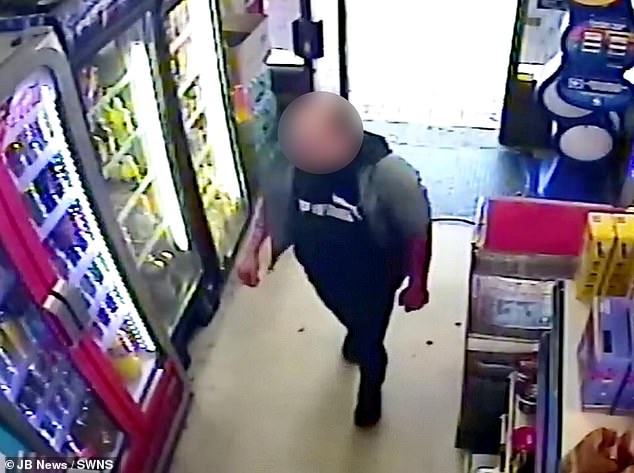 The suspect can be seen soaked in blood before he walks into the JB News store (pictured, him entering the shop) in Bedworth town centre on April 23

The man then left the store before continuing his mile-long stabbing spree as police rushed to the scene and eventually detained him under the Mental Heath Act.

Mr Bhadal, 53, who owns the shop, said: ‘It was pretty frightening. He just came into the shop while I was talking to a customer and out of nowhere just smashed him in the face.

‘He walked in, grabbed a drink from the fridge and as he came to the counter just whacked this elderly guy for no reason at all.

‘He was covered in blood himself and it was quite a scary. There was blood literally dripping from his hands and his head and I just acted on instinct.

‘I came out from behind the counter and pushed and grabbed this guy to try and usher him out of the shop and away from the customer. ‘I was telling him “you can’t do this” and he was shoving me back but I tried to stand my ground.

‘He was saying he was going to slice us up if I didn’t let him go, so I eased my grip on him and luckily he looked at us both and then just walked away.

‘I wasn’t sure if he had a gun, a knife, or a different weapon so it was pretty worrying and at that time we didn’t know about any other attacks.

‘The customer was left a bit battered and bruised but he didn’t go to hospital. He was obviously a bit shaken up though.

‘The man then went into another shop and punched this poor woman several times before attacking another woman in Boots.

‘He also attacked another man and a couple of other women before police eventually turned up and tasered him.

‘I don’t think I really thought about what I was doing at the time, I just wanted to protect my customer and my business.’ 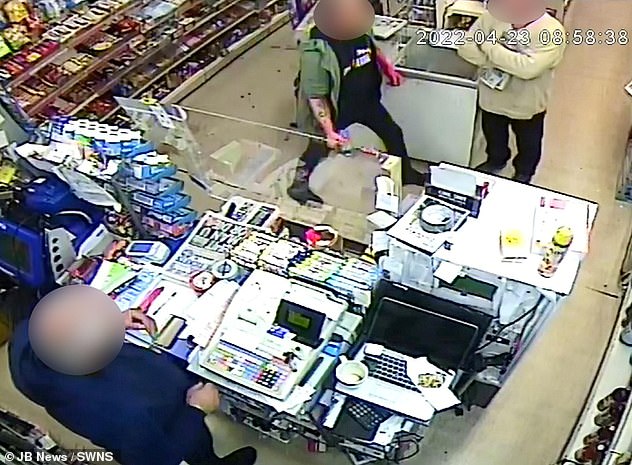 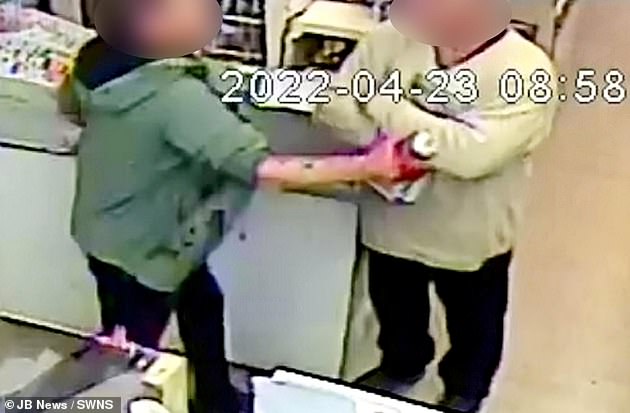 The shocking string of attacks began when a woman was stabbed in the face with a pair of scissors at 7.45am at her home on Gilbert Close.

Further attacks were then carried out about a mile away in Bedworth town centre before the suspect was arrested outside a One Stop shop.

A trail of blood could be seen around the town centre while other shocking pictures shows smears of blood across the front door of a house.

In total, three people were believed to have been stabbed and eight further victims sustained minor injuries.

Sheila Corcoran, 76, the neighbour of one victim, described hearing banging noises as the suspect, who also lives nearby, tried to force his way into one property.

She said: ‘The lady who lives next door to me was stabbed.

‘I did hear something bang, but I just thought she had dropped something. Now I know it was her banging the door.

‘She managed to close her door and lock it quickly. Later on, she had to go to hospital for stitches.

‘There is blood all on her door and a trail of blood all outside my house.’ 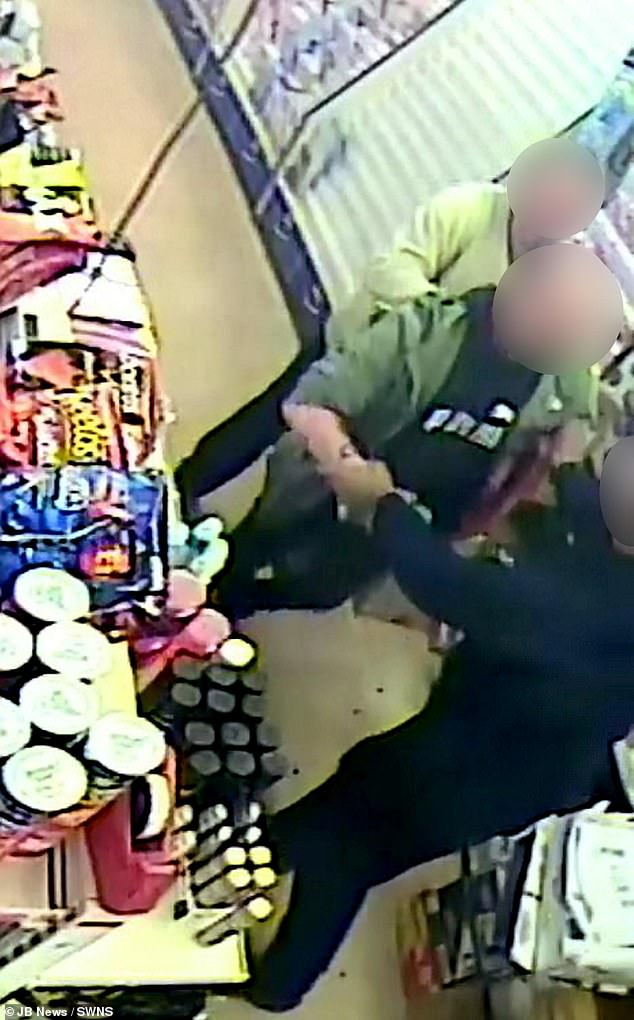 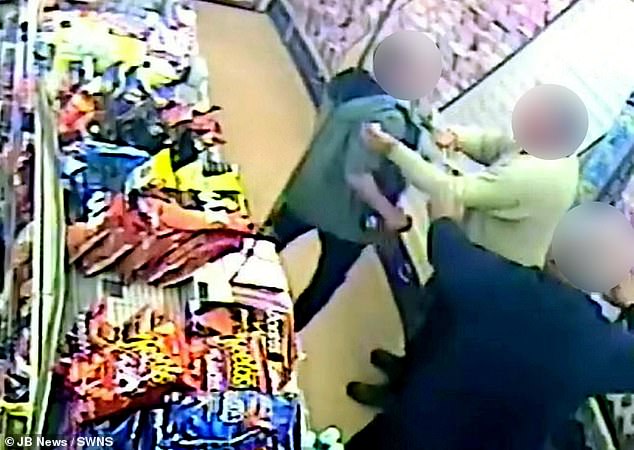 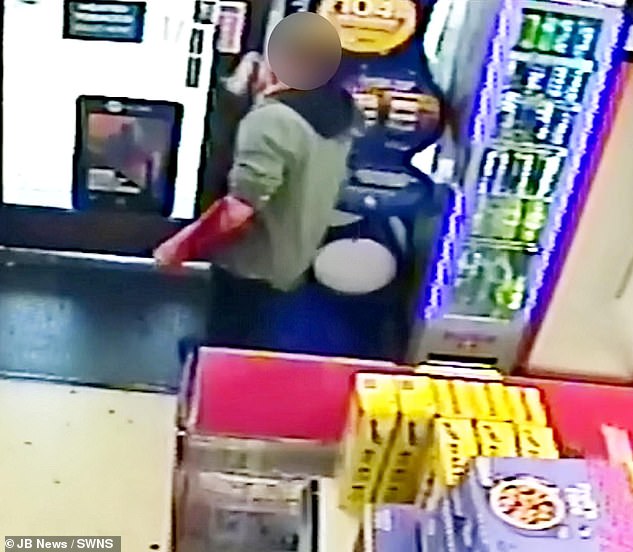 Detective sergeant Rich Simpkins, of Warwickshire Police, said at the time: ‘This was a nasty incident which has left a number of people with injuries and I know this will cause the community great concern.

‘The public can expect to see a heightened police presence in and around Bedworth town centre to provide reassurance while our officers continue to conduct their enquiries.

‘We have a man in custody and are not looking for any further suspects in connection with this incident.

‘We know that a number of people were in the area at around the time of the incident and that there may be more members of the public who may have been approached or assaulted by the suspect.

‘If you were approached by the suspect or may have witnessed the incident, I would urge you to get in touch.

‘Any information you may have could really assist with our investigation.’