In the first year of his presidency, Joe Biden has used a single, epochal theme to frame an array of policy announcements. Sharing vaccines with developing nations and investing in America’s decaying infrastructure were not just important initiatives in themselves; they were ways to demonstrate that democracies can still deliver for their citizens in an age of rising authoritarianism.

He said, in his first presidential press conference in March, that it was “absolutely clear” the world was witnessing “a battle between the utility of democracies in the 21st century and autocracies”.

On Friday (AEDT) Biden will thrust that battle into the global spotlight by hosting a virtual two-day Summit for Democracy – fulfilling a pledge he made during the 2020 election campaign. 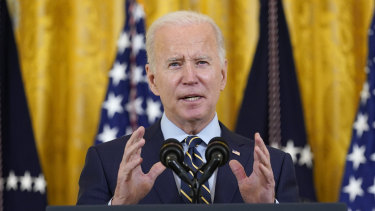 President Joe Biden will host 110 nations for a vitual “summit for democracy”.Credit:AP

The Biden administration says it wants to use the summit to “build a shared foundation for global democratic renewal”, and there is no doubt that democracy is under siege around the globe.

In its 2021 report, democratic monitoring group Freedom House found that less than 20 per cent of the world’s population lives in countries it classifies as “free” – the smallest proportion since 1995. Meanwhile, the proportion of countries listed as “not free” is at the highest it has been in 15 years.

The scores are based on Freedom House’s annual analysis of citizens’ access to political rights and civil liberties in 210 countries.

Meanwhile, the United States was listed as a “backsliding democracy” for the first time this year by the Swedish-based International Institute for Democracy and Electoral Assistance following the January 6 Capitol riot and new restrictions on voting rights in several Republican-controlled states.

Given the increasingly blurred lines between democracy and autocracy, deciding whom to invite to the summit was always going to be somewhat arbitrary. Even so, Biden’s list of quests features several striking omissions and inclusions.

Pakistan, Iraq, Angola and the Democratic Republic of Congo are among the 110 countries invited to the summit despite being classified as “not free” by Freedom House. Pakistan appears to have made the cut because it is a longstanding US security partner in the war on terror. Had Iraq not been invited then Israel would have been the only Middle Eastern country in attendance.

Meanwhile, countries with significantly higher democracy ratings from Freedom House – including Hungary, Singapore, Bolivia and Sri Lanka – did not receive an invitation. Hungary’s far-right Prime Minister Victor Orban is up for re-election early next year, and the White House appears not to have wanted to boost his standing by inviting him to the summit. 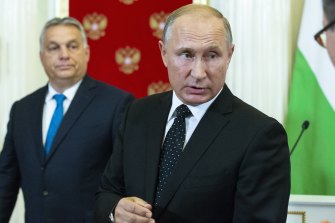 University of Sydney politics professor John Keane, the author of The Life and Death of Democracy, says the White House came up with a “cynically drawn up, bureaucratically crafted, agency-structured invitation list that includes states that by any measure are falling way down the democracy rankings or aren’t democracies at all”.

“The great danger I see is with the summit is that democracy gets dragged into power posturing and increases public cynicism towards the ideals of democracy,” Keane says.

“Like the Quad [grouping of the US, Australia, India and Japan], the summit can’t be understood outside an attempt by the US to build an anti-hegemonic – read: anti-China – coalition.”

Daniel Nexon, an international relations expert at Georgetown University, says the composition of the summit reflects a combination of an “anti-China geopolitical agenda” and an attempt to punish specific backsliding democracies. 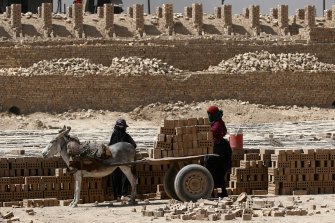 Women work at a brick factory in Baghdad’s south-east suburb of Nahrawan, Iraq. They work 12 hours a day for about $US15 ($20). Iraq has been invited to Joe Biden’s summit of democracy.Credit:AP

Anatol Lieven, a senior research fellow at the Quincy Institute for Responsible Statecraft, says hosting the summit exposes the US to charges of hypocrisy.

“I fear the summit will draw attention to the fact that in many parts of the world the United States supports authoritarian regimes and of course also highly illiberal democracies,” he says.

“In fact US primacy in the Middle East and elsewhere rests on these authoritarian allies or client states in very much the same way that Russia’s geopolitical position rests on authoritarian states like Belarus and Syria.”

Herve Lemahieu, director of the power and diplomacy program at the Lowy Institute, says there is an inherent tension between Biden’s goals of promoting democracy and competing with China for global supremacy.

“The US needs to mobilise a broad church of countries concerned about China and not all of those countries are democracies” Lemahieu says. “In fact, most ASEAN countries are either authoritarian regimes or flawed democracies.”

He says the perception the US is forming an “exclusive club” of democracies risks alienating strategically significant countries which are currently hedging their bets between China and the US.

He points to South-east Asian nations such as Vietnam, Malaysia and Thailand – none of which were invited.

Writing in USA Today this week US Secretary of State Antony Blinken said the Biden administration was not trying to carve up the world into “rigid ideological blocs”, noting that the countries at the summit “represent a spectrum, from rock-solid democracies to ones that have backslid”.

Rather than a mere talk fest, he said: “All participating governments will make concrete commitments toward three goals: countering authoritarianism, fighting corruption and protecting human rights.

“To encourage accountability, President Biden will bring everyone together in a year to report our progress. The United States will be making commitments, too.”