Property developer, 35, is fined more than £65,000 after cutting down dozens of protected 100-year-old oak trees to make way for holiday lets – and ordered to plant 650 new trees

A defiant property developer has been ordered to pay more than £65,000 after ignoring the desperate pleas of locals and cutting down dozens of historic, protected oak trees that were over 100 years old.

James Barney, who had ‘access to a rich sea of funding’, planned to build two holiday lets on the plot of land he had recently bought, a court heard.

However, the 35-year-old was met with furious opposition by neighbours after they were awoken by the noise of a digger and building work ripping up the trees.

The oaks, which had been granted a tree protection order (TPO), stood in an area of woodland at Scoreys Copse, Horton Heath, Hants.

The protection order meant the cutting, damage or destruction of the trees was prohibited without the local planning authority’s written consent.

Barney, who lives with his parents in a £2.3m house in nearby Bursledon, claimed he didn’t know of the TPO when he chopped them down – and ‘didn’t believe’ anyone that told him otherwise. 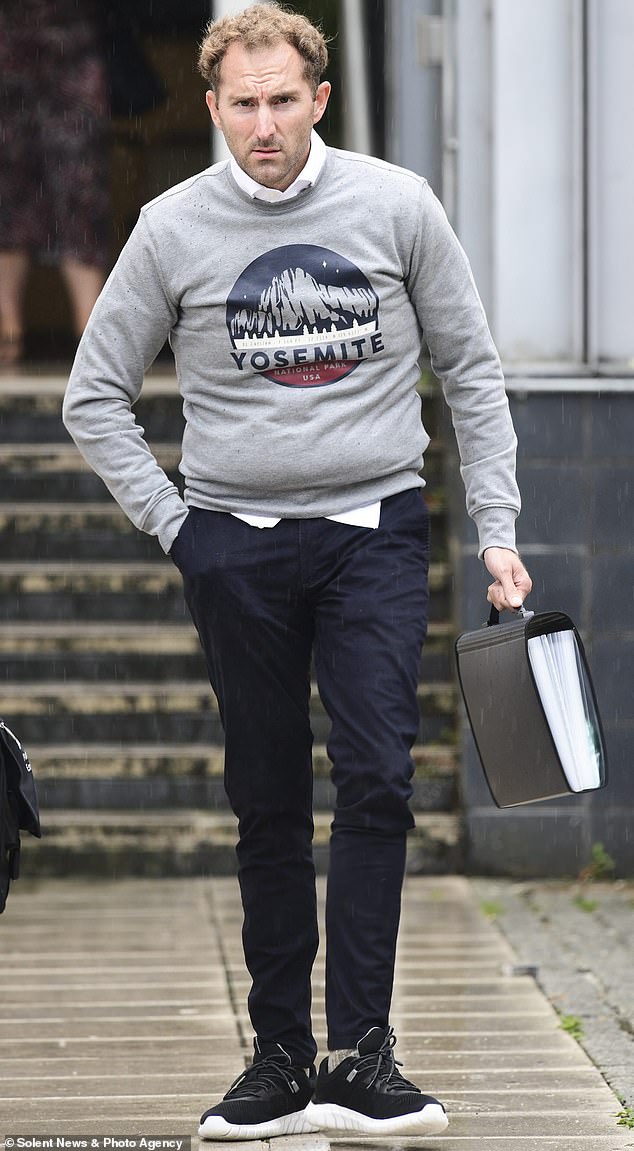 Defiant property developer James Barney has been ordered to pay more than £65,000 after ripping down a series of protected oak trees in Horton Heath, Hampshire. He was pictured outside Southampton Magistrates’ Court on Wednesday. 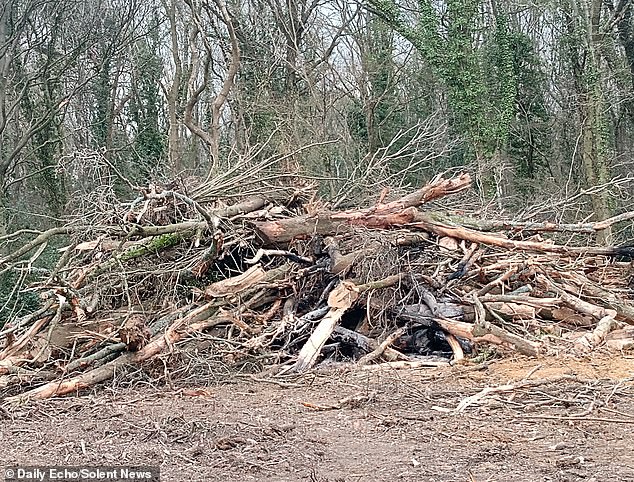 As per his tree replacement notice, Barney must also clear and replant the area (picture) – with at least 37 mature oaks of 2.5m height – estimated to cost between £25,000 and £30,000, which his parents will pay.

At Southampton Magistrates’ Court, Barney was fined £50,000, having been prosecuted under the Town & Country Planning Act 1990 and pleading guilty to breaching tree preservation regulations.

He has also been handed a tree replacement notice by Eastleigh Borough Council – meaning he has to plant 650 new trees to replace the ones he uprooted.

‘On April 10 a neighbour came downstairs and heard a great deal of noise and saw a digger being offloaded.’

The court heard several eye witnesses saw the digger start felling trees and a local councillor came to explain that the work, which was causing harm, should be stopped immediately due to the TPO but Barney continued regardless.

The court was shown a video taken by angry residents – showing the scale of the destruction, and refusal of the contracted workers to halt their work – who even made a giant bonfire of the timber they had chopped.

The bonfire was shown to have happened a short distance from a potentially dangerous pipe.

Mr Robb added: ‘From the local authority’s point of view, the photos [of the site] and video speak for themselves.

‘Mr Barney had plans for the site – potential for holiday homes – and has said throughout that he thought the site was not protected by a TPO after checking ‘magic maps’.

‘It is a protected woodland – he could have found out, TPOs are readily available online for members of the public to find, but he didn’t.

‘Around 53 trees were cut down but that does not account for the potentially thousands. In law, a tree could be a sapling.

‘You do not just look at a tree individually, you look at the woodland as a whole.

‘That is the serious problem with this world.

‘When you look at the particular woodland you are looking at the whole ecological unit and that includes more than the 53 trees that were taken down and burnt.

‘What was an extremely flagrant breach by Mr Barney had serious consequences for local people and others who enjoyed those woods – the impact is obvious.’

Defending Barney, barrister Scott Stemp said that when Barney was told about the TPOs, he ‘didn’t believe’ them – until he was sent the TPO on the morning on April 13, and the work subsequently stopped.

He added: ‘I would suggest he was a man who was belligerent in wanting to be shown a copy of the TPO.’

District Judge Peter Greenfield said: ‘The story appears to begin on 10 April 2021, when a neighbour heard building noises, lots of banging and activity on the site. 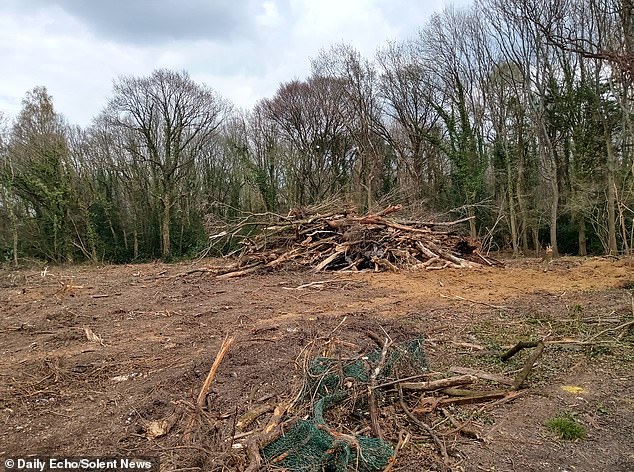 Neighbours living near the woodland, at Scoreys Copse,  were left furious at the damage

‘He started videoing the degree of clearing and when Mr Barney was asked what was going on he said he was clearing it for holiday lets.

‘About half the copse had been cleared of trees.

‘The work continued and it seemed a mission – see how much could be cleared until the building work was stopped.

‘Mr Barney was then told by a neighbour that the trees have been here for 100 years.

‘My view is it is a high culpability case. There was no risk assessment or attempt to stop the work.

‘Pausing at that stage, taking note of local opposition would have been a good idea. Clearly the local population were gravely affected by work on that site.

‘My view is there was a rush over the two days working early in the morning and late into the night – before a stop notice could be issued.

‘I don’t accept that Mr Barney was not an expert in planning matters and didn’t know what was going on. 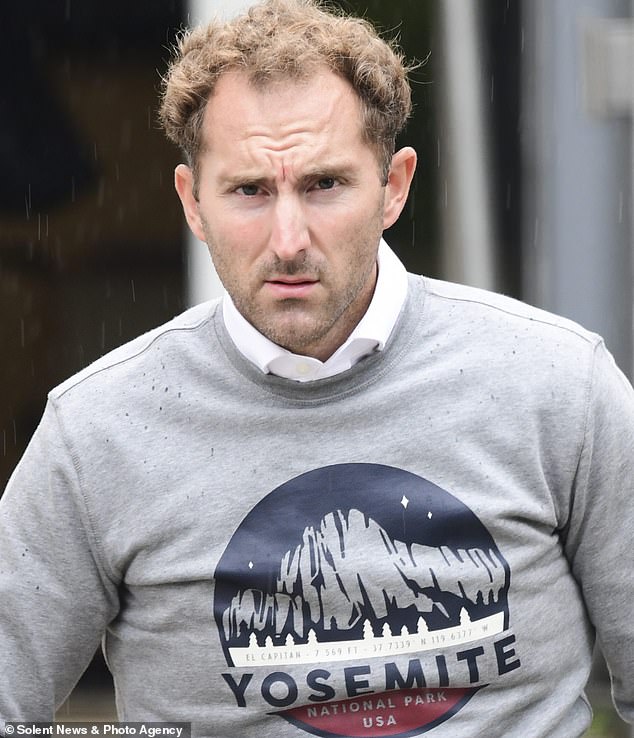 A district judge said Barney – who Barney, who lives with his parents in a £2.3m house in nearby Bursledon –  heard had ‘access to a rich sea of funding’.

‘He had a planning expert and advice was available to him.

‘He bought the land with the intention of developing either a large house or two holiday lets – either way to make a profit.

‘The harm caused members of the public distress and clearly there was a disturbance to the woodland.

‘Mr Barney didn’t pause to discuss even though he had the means to do so.

‘I find his finances somewhat opaque. He can pay any fine the court imposes and it is my view that there is no limit to his availability to pay that fine.

‘Deterrence is a major aim of the sentencing. My view is he has access to a rich sea of funding which allows him to embark on these property development plans.’

It is the largest fine Eastleigh Borough Council has ever managed to have handed out.

Conservative MP for Eastleigh Paul Holmes described Barney’s actions as ‘unacceptable’ and added: ‘Now it is essential the site can be restored fully to how it was before Mr Barney took his axe to it.’