One of Britain’s biggest energy firms was last night accused of betraying customers by closing its helpline early to host ‘boozy’ work events for staff.

Households are facing the worst energy crisis in living memory, with suppliers and charities inundated with pleas for help from families unable to afford bills predicted to soar beyond £5,000 a year.

Yet Octopus Energy, the UK’s fourth-largest provider, supplying more than 3million homes, is shutting its main call centre at 4pm on Fridays – an hour earlier than on Monday to Thursday – so staff can enjoy prosecco, bottles of Corona beer and cans of cider.

Consumer experts slammed the move as ‘unforgivable’ given the current cost of living crunch.

During the company-wide weekly event – dubbed ‘family dinner’ – dozens of call centre and IT workers at the firm’s Manchester office are invited to the canteen at 4pm to watch senior management, including founder and chief executive Greg Jackson, give video presentations. 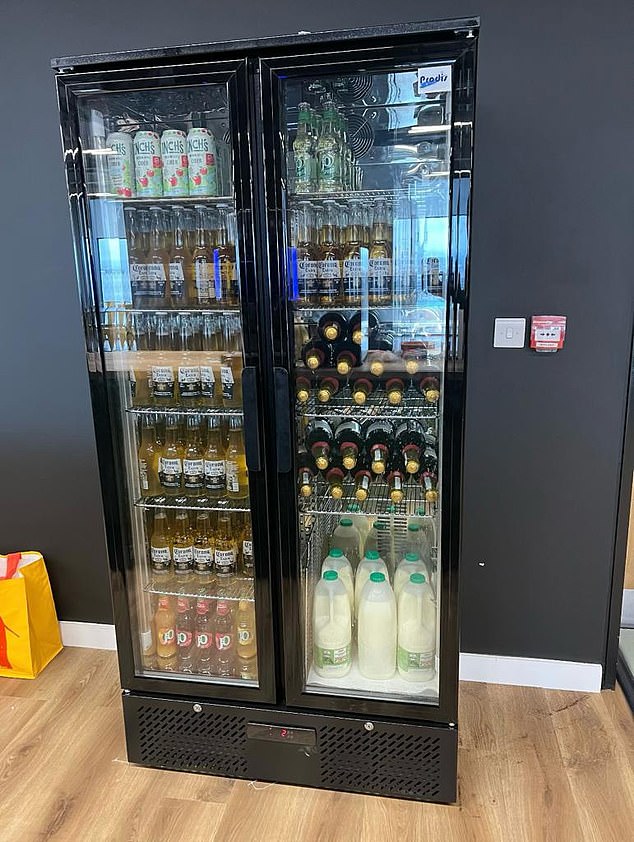 The Octopus Energy staff drinks fridge has prosecco, bottles of Corona beer and cans of cider

They can help themselves to drinks paid for by the company. A large fridge in the office contains over 20 bottles of M&S prosecco, with other drinks available – amounting to what one insider described as an ‘unlimited’ supply.

The presentations last from 30 minutes to an hour, but staff often stay at the office drinking late into the evening.

And a source said the ‘boozy’ get-togethers ‘could get a bit out of hand’.

Separately, at a delayed Christmas party held in June, employees were treated to a dinner with caviar on the menu.

It comes after Mr Jackson told BBC Radio 4’s Today Programme on Wednesday that ‘it was impossible to overstate how serious the energy bill problem is’ and that ‘it is our job to work incredibly hard to make sure support is delivered’.

On its website yesterday, Octopus warned that due to a high volume of calls ‘we are not delivering our usual very short waiting times on the phone’.

Consumer expert Martyn James said customers struggling to get through will be ‘disgusted to think this is happening’.

He added: ‘It’s unforgivable given the exceptional challenges people are facing. If anything, energy firms should be keeping their helplines open later.’

Dennis Reed, of pensioners’ campaign group Silver Voices, said the events were a ‘betrayal’, adding: ‘Having a fridge full of booze seems especially insensitive when some older people will be worried about freezing in their homes and putting food on the table this winter.’

Octopus, currently seeking to borrow £1billion of taxpayers’ money to buy defunct energy firm Bulb, nearly doubled its revenue to £2billion in the year up to April 2021.

He added: ‘Our staff look after customers 24/7, and it’s important we look after those staff.’

The firm said it has extended email support from 8am to 10pm, seven days a week, and offers an out-of-hours emergency call-back service.