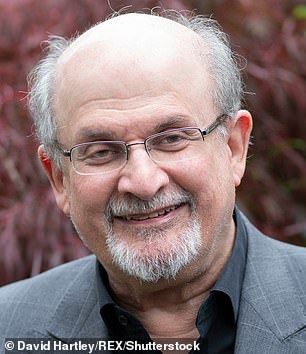 Supporters of Iran have been celebrating the callous attack on Salman Rushdie, which saw the author stabbed up to 15 times at an event in upstate New York

Supporters of Iran have been celebrating the callous attack on Salman Rushdie, which saw the author stabbed up to 15 times – including once in the neck.

Rushdie, 75, was attacked by Hadi Matar, 24, as he was being introduced to the stage for the CHQ 2022 event in Chautauqua, near Buffalo in upstate New York, on Friday morning. He was airlifted to hospital and undergoing surgery in Erie, Pennsylvania.

He was issued a fatwa – a death sentence – in 1989 by Iran’s Ayatollah Khomeini after his book, the Satanic Verses, sparked and outcry with Muslims in Britain.

The book supposedly insulted the Prophet Mohammed and The Koran, with Khomeini calling for Rushdie’s death, and also called for Muslims to point him out to those who could kill him if they could not themselves.

So far Iran has not officially commented on the attack against the author by Matar, who rushed the stage after approaching him from behind. It’s believed that Matar is sympathetic to the Iranian regime and the Islamic Revolutionary Guard.

But supporters of the government have praised the stabbing, saying that it is Khomeini’s fatwa finally materializing into action after 33 years.

Some said that they were hoping for the author, who was knighted in 2007 in Britain ‘for services to literature’, to die following the brutal attack.

Others warned that those who were considered an enemy to the Islamic Republic would suffer a similar fate as him.

A quote reportedly from Ayatollah Ali Khamenei, the current Iranian leader, was shared online with him saying the fatwa against Rushdie was ‘fired like a bullet that won’t rest until it hits its target.’ 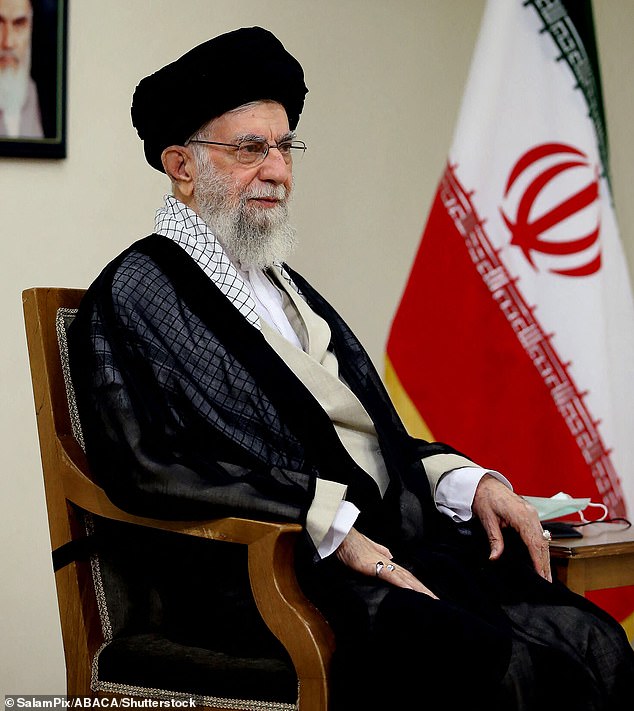 Iran’s Ayatollah Khomeini issued a fatwa against Rushdie in 1989 after his book, the Satanic Verses, sparked and outcry with Muslims in Britain. The book supposedly insulted the Prophet Mohammed and The Koran, with Khomeini calling for Rushdie’s death, and also called for Muslims to point him out to those who could kill him if they could not themselves 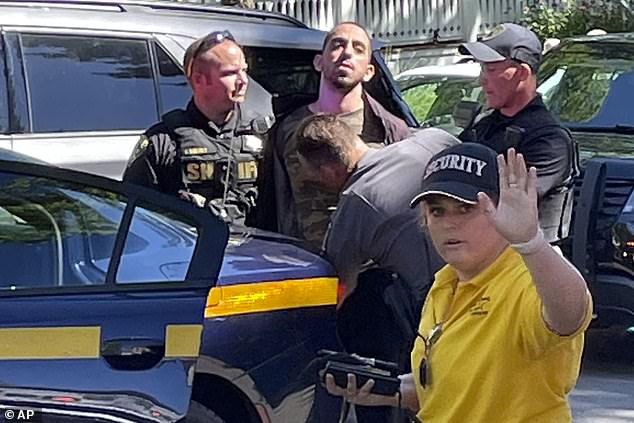 Rushdie, 75, was attacked by Hadi Matar, 24, as he was being introduced to the stage for the CHQ 2022 event in Chautauqua, near Buffalo, on Friday morning. Pictured: Matar is walked to a squad car in handcuffs

Hossein Saremi, a conservative social media activist, added that a ‘lion’ had beaten Rushdie and that the attacker was part of ‘Islam’s soldiers without borders.’

He wrote: ‘Revenge may be delayed, but it will inevitably happen’.

A senior adviser to Iran’s nuclear negotiating team, Seyed Mohammad Marandi, said that he will not shed a tear for the writer ‘who spouts endless hatred and contempt for Muslims and Islam.’

Several accounts affiliated with the Revolutionary Guards, for which Matar reportedly was sympathetic towards, openly boasted about the attack.

One called Syria News published a post saying: ‘The order was carried out at a place they never thought about. It’s not important if he doesn’t die; it’s important that they understand the battle is not over.’

Eghtesad Salem,a conservative news website published a column saying that the attack was issuing a clear message to American officials.

It stated that they would be hunted down for the assassination of Iran’s top general, Qassim Suleimani, who died in a U.S. airstrike in January 2020. 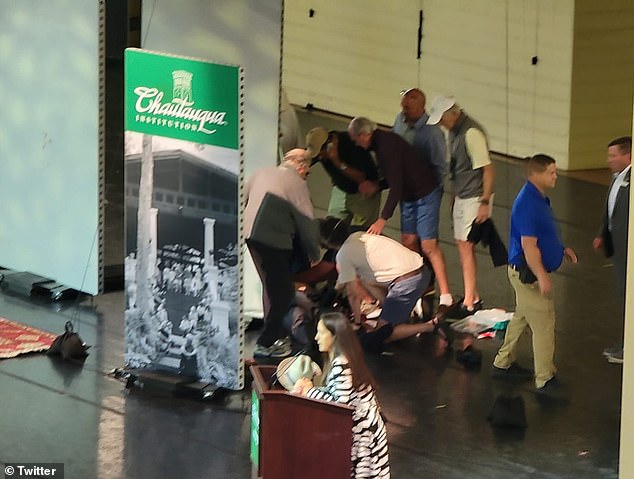 Rushdie was attacked on stage ahead of his speech in Chautauqua, near Buffalo, with witnesses claiming that he was ‘punched and stabbed’ 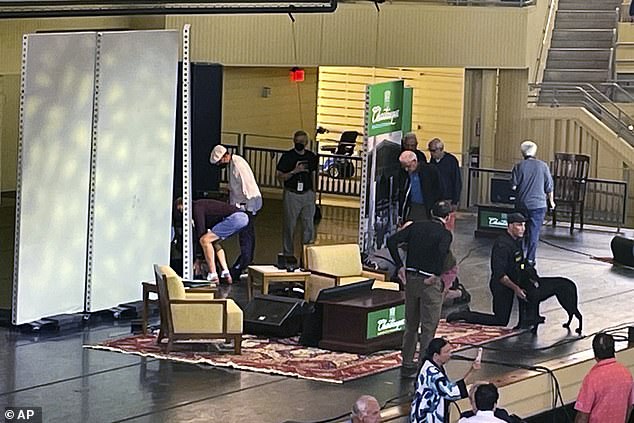 Medics attended to Rushdie after the attack, with witnesses saying a man ‘punched and stabbed’ the author as he was announced on stage 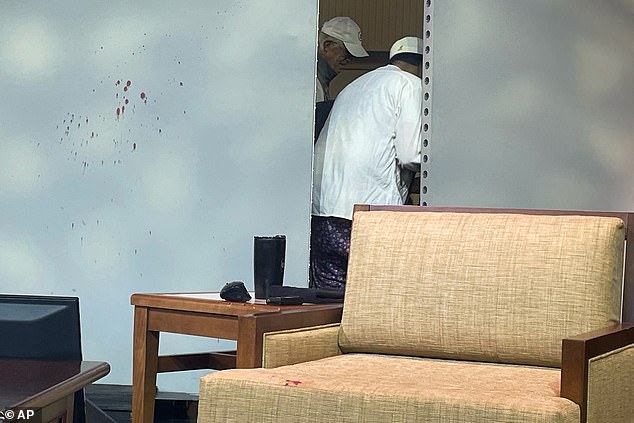 Blood was spattered on the wall behind where Rushdie had been attacked, with some also seen on a chair. New York State Police confirmed that Rushdie was stabbed in the neck 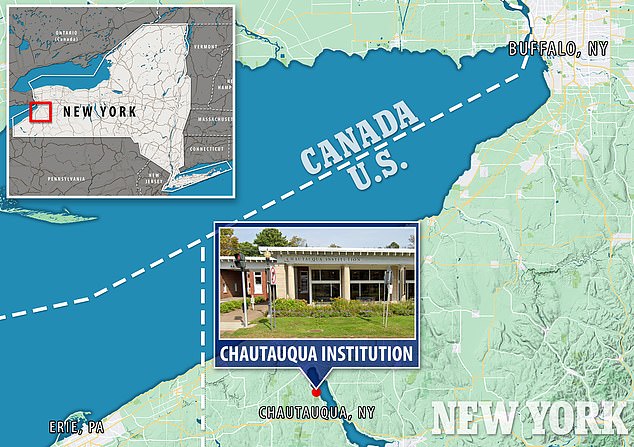 Majid Motamedi wrote: ‘Carrying out the order to murder Salman Rushdie 33 years after it was issued sends a message to American officials that they must fear Iran’s revenge for Gen.

‘Qassim Suleimani, until their death, even if the revenge takes 33 years.’

The fatwa, or ‘spiritual opinion’, followed a wave of book burnings in Britain and rioting across the Muslim world which led to the deaths of 60 people and hundreds being injured.

Rushdie was put under round-the-clock security from 1989 to 2002, at the expense of the British taxpayer, when a $3million bounty was put on his head.

He was forced to go into hiding for a decade with police protection, and previously said he received a ‘sort of Valentines card’ from Iran each year letting him know the country has not forgotten the vow to kill him.

He even adopted an alias, Joseph Anton – a combination of the first names of two of his favourite writers, Conrad and Chekhov.

The fatwa also led to the murder of the book’s Japanese translator Hitoshi Igarashi, the targeting of its translators and publishers in Turkey, Norway and Italy, and worldwide riots and book-burnings – while The Satanic Verses itself was banned in many countries. 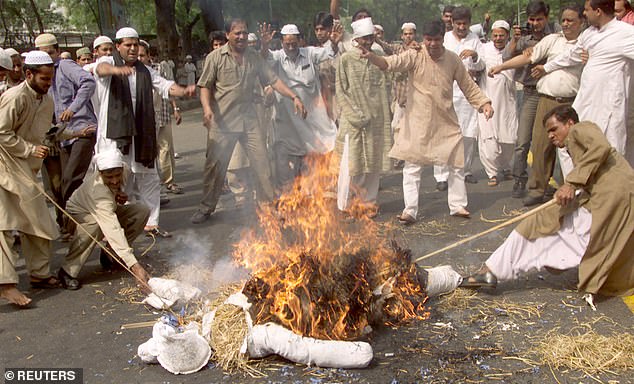 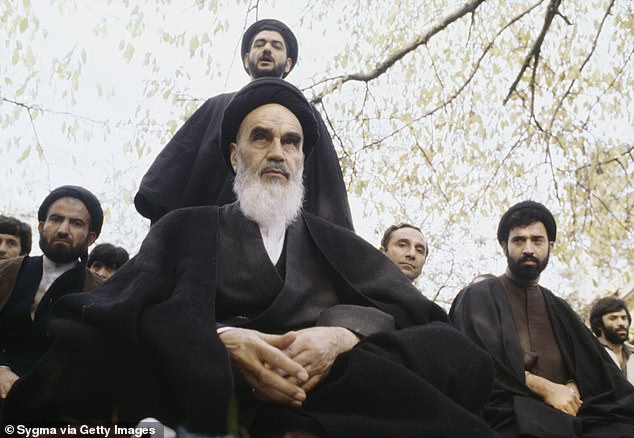 Speaking about the controversy with the Mail, Sir Salman said: ‘Being under the fatwa was a jail, but I think that one of the problems is that from the outside it looked glamorous, as I sometimes showed up in places in Jags with people jumping out to open the door and make sure you get in safely and so on. Looks of who the hell does he think he is? Well, from my side it felt like jail.

‘There was this crude argument that I did it in some way for personal advantage, to make myself more famous or to make money. At its most unpleasant it was levelled at me from the Islamic side that the Jews made me do it. They said my [second] wife was Jewish. She wasn’t, she was American.

‘If I had simply wanted to trade on an insult to Islam I could have done it in a sentence rather than writing a 250,000-word novel, a work of fiction.’

In 2012, a semi-official Iranian religious foundation raised the bounty for Rushdie from $2.8 million to $3.3 million.

‘What you have to remember is that The Satanic Verses is not called Islam the Prophet, it is not called Mohammed, the country is not called Arabia – it all happens in the dream of somebody who is losing their mind.’

During the fatwa he lived in permanent terror and at one point thought his ex-wife Clarissa Luard and their son Zafar, who was nine at the time, had been killed by assassins or kidnapped.

In 1998 Iran’s reformist president relaxed the fatwa and said it had no intention of tracking Rushdie down and killing him.

The Index on Censorship, an organization promoting free expression, said money was raised to boost the reward for his killing as recently as 2016, underscoring that the fatwa for his death still stands.

Technically it still stands, as the only person who is able to cancel the call for his death, Khomeini, died in June 1989 – months after issuing the fatwa.

Rushdie’s London-based son Zafar, 42, is aware of the incident and his father has been seen being transported by air ambulance after the attack. 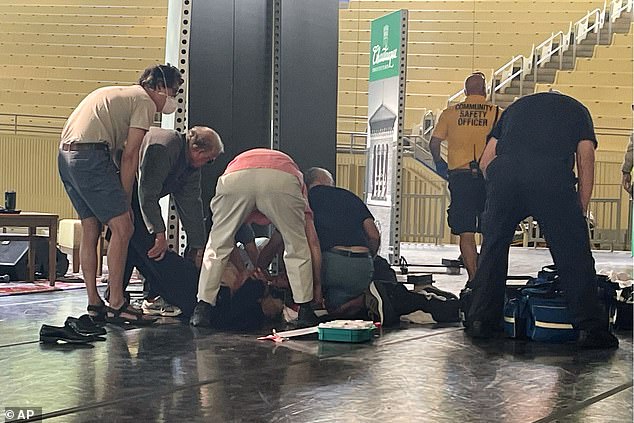 People rushed to assist the author after the attack, with the attacker being restrained by witnesses.  The motive for the stabbing is currently unknown

Senator George Borrello branded the attack as ‘shocking’ adding that there is ‘no room’ for ‘beliefs that demand that you kill someone who disagrees with you’.

He added: ‘This shocking attack on a celebrated and noted author, apparently prompted by fundamentalist extremism, has no place in America.’

New York State Police said in a statement: ‘On August 12, 2022, at about 11 am, a male suspect ran up onto the stage and attacked Rushdie and an interviewer.

‘Rushdie suffered an apparent stab wound to the neck and was transported by helicopter to an area hospital.

‘His condition is not yet known. The interviewer suffered a minor head injury.

‘A State Trooper assigned to the event immediately took the suspect into custody. The Chautauqua County Sheriff’s Office assisted at the scene.’

Salman Rushdie was serializing a novella called The Seventh Wave, on Sub Stack, which appeared to have a heavy focus on spies and organized killings.

His latest piece of writing referenced men in ‘sodden balaclavas’:

The four men in black wearing sodden balaclavas are out in the open, closing in. ANNA and FRANCIS are on the terrace of the house, holding guns.

Come down, Anna, Nobody gonna hurt you. And the other individual we don’t require.

Don’t you crack wise now, Anna. No, we do not need no fucking drink. Maybe you didn’t notice it’s wet out.

We have towels. You need to dry your hair?

They are within range now. This is too easy. We can take them all.