Social media users have poked fun at new Health Secretary Therese Coffey after her alarm went off and played Dr Dre on her phone during a live interview.

Ms Coffey’s interview with LBC’s Nick Ferrari was interrupted by the phone alarm while she was being quizzed about taking on her new role.

She scrambled to switch off her alarm, which was set to the opening bars of the 1999 song by US rapper Dr Dre – Still D.R.E.

‘I’ve just realised my alarm is going off on my phone, I apologise,’ she said. ‘You’re getting a bit of Dr Dre.’

Social media users were quick to pick up on the unlikely song choice for Ms Coffey’s alarm with more cynical users accusing her of setting up a publicity stunt. 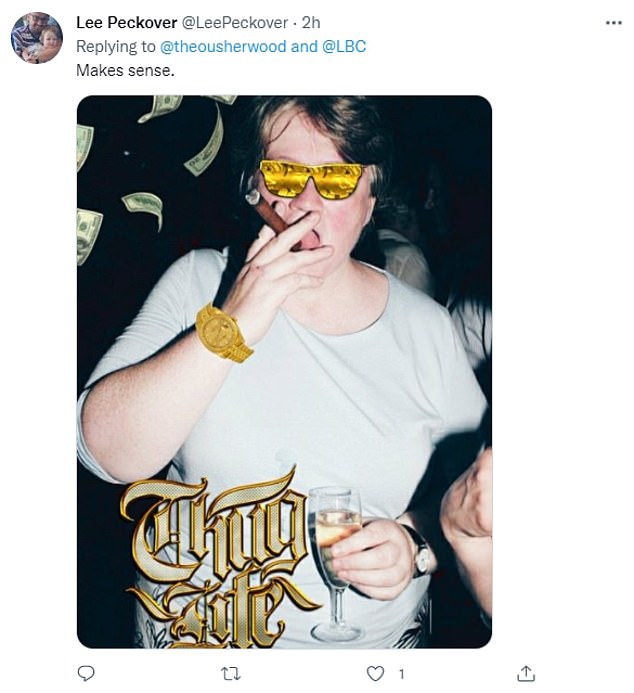 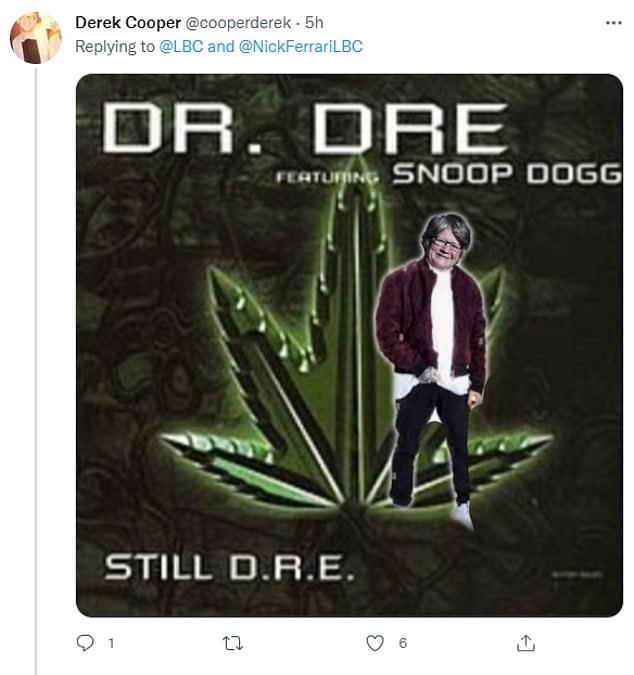 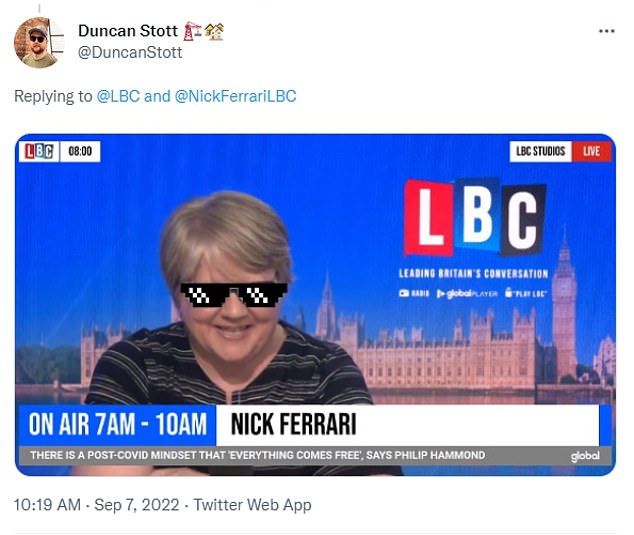 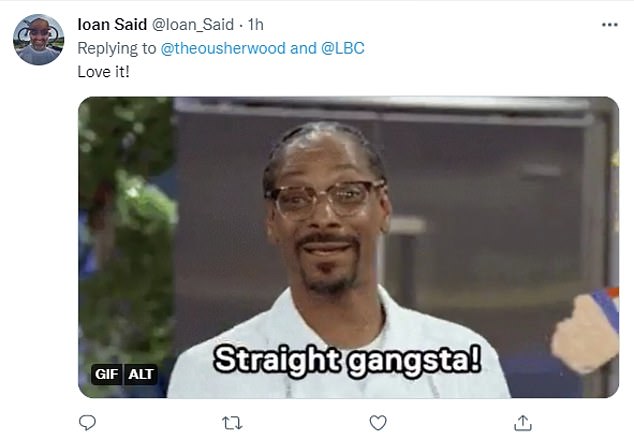 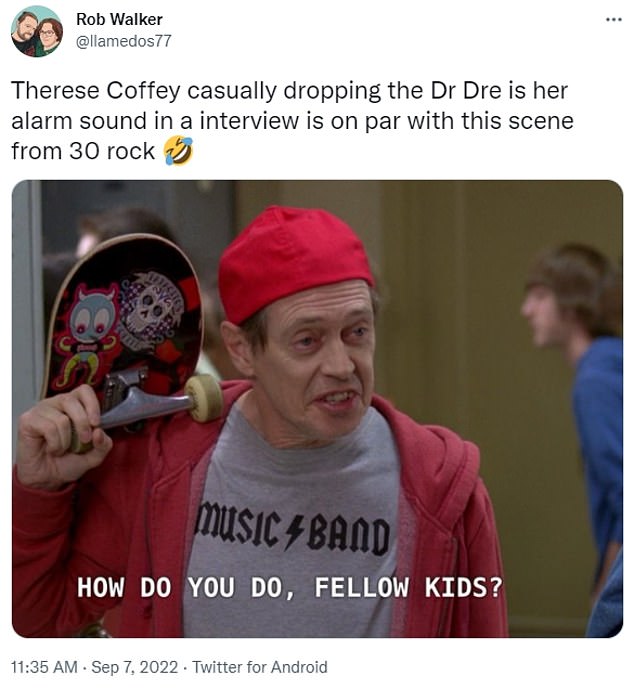 Some believed the incident was an attempt by Ms Coffey to appeal to younger members of the population.

One user said: ‘If you asked Therese Coffey to give an impromptu couple of lines of Dr Dre I guarantee you she’d not have a clue.’

Other users were quick to poke fun at the surprising choice of song, with one user writing: ‘Backed Therese Coffey alarm clock being Dr Dre at 1,000,000 to 1. Never in doubt.’

Some users were quick to poke fun at the surprising choice of song, with one writing: ‘Backed Therese Coffey alarm clock being Dr Dre at 1,000,000 to 1. Never in doubt’

A third user wrote: ‘Dr Dre being asked about Therese Coffey is the 2022 moment I am waiting for.’

It comes as Ms Coffey has admitted that she is ‘no role model’ when it comes to her own body as she was questioned over her weight, drinking habits and cigar smoking.

In the interview that was briefly interrupted by Dr Dre with LBC’s Ferrari, he asked: ‘As someone who likes a cigar, enjoys the odd noggin – as I do – and let’s be candid, you and I could possibly do with losing a pound or two… you are not necessarily the best example to be the Secretary of State for Health. Therese Coffey, how would you respond?’. 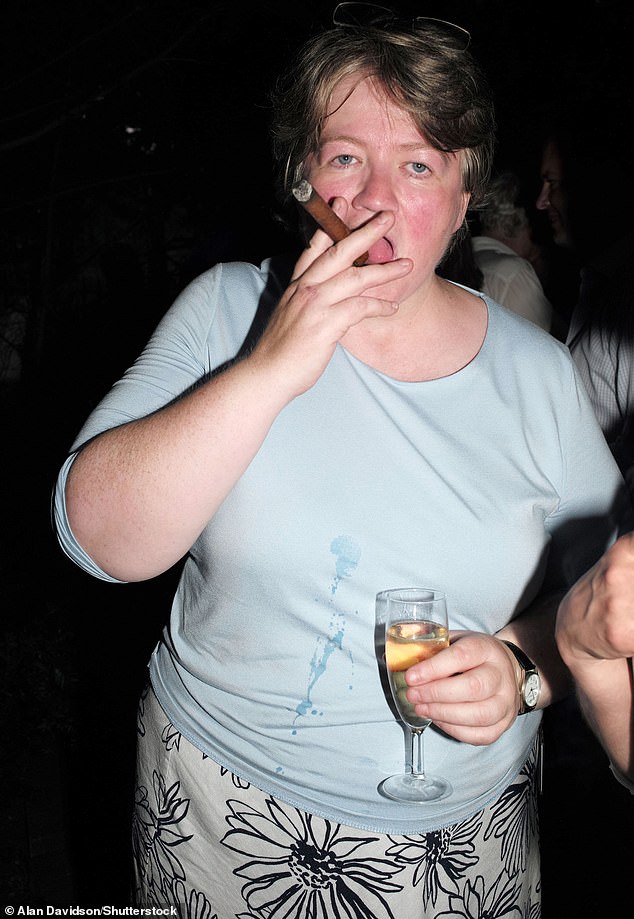 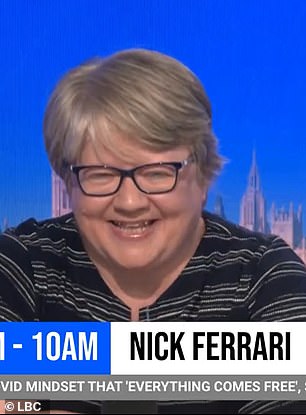 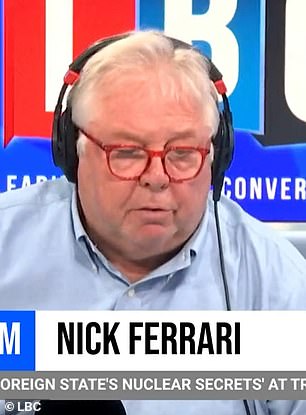 The cabinet minister smiled and said: ‘My focus is on how we deliver for patients and I appreciate I may not be the role model, but I am sure that the Chief Medical Officer and others will continue to be role models in that regard and I will do my best as well’.

As the photo of her smoking and drinking at the Spectator Summer Party in 2016 was trending on Twitter, she added: ‘I will probably get all sorts of comments, Nick, but nevertheless, on a more serious matter, I have been a patient of the NHS too and have had some brilliant experiences and I have had some experiences where it could have been better.

‘My focus is on patients and that is what I will be making sure the department focuses on too.’

The new Health Secretary, who describes herself as a former smoker, was asked about the body shaming she faced online and said: ‘I don’t tend to look at social media’, adding that such comments do not worry her.

There was some support for Ms Coffey on Twitter – from people who dismissed concerns about her lifestyle. Some said that the criticism was sexist and would not be aimed at a man.