Members of Green New Deal Rising shared a video to social media and could be seen yelling at the Business and Energy Secretary over rising energy costs.

In the footage, one protestor shouts: ‘Millions of people are choosing between heating and eating. People cannot feed their children.

‘We want to live in a planet that people care about,’ as a man replies ‘Will you go out?’

Another eco-warrior continues: ‘And whilst millions are struggling to survive due to rising energy bills, Shell has just announced a record seven billion pounds in profit.

‘By blocking the windfall tax, Kwasi…’ 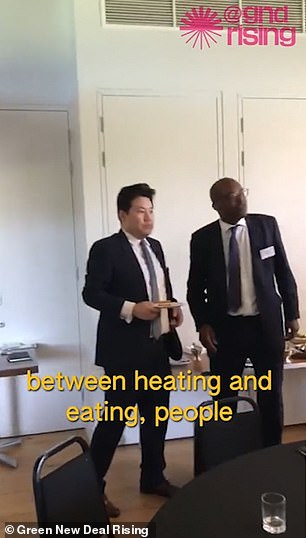 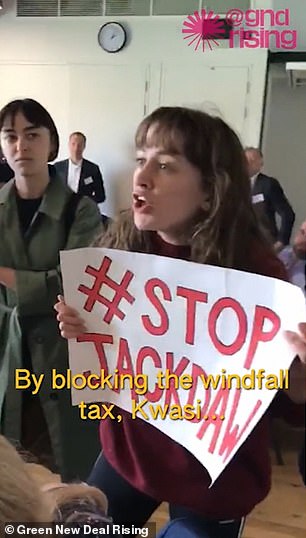 In response to the clip, Mr Kwarteng tweeted: ‘Shout and scream all you like, but I’m not going to put Britain’s energy security at risk by shutting off domestic oil and gas production’

The video then cuts to a lady saying, ‘You said yourself that new oil and gas will not affect prices. The best way to bring down bills is energy efficiency.’

A man also cries, ‘How can you possibly think it’s a good deal, a good idea to back jackdaw, when millions of people can’t afford to pay their bills.’

A final female approaches Mr Kwarteng and says, ‘Kwasi, you are lying to the UK public. You are trying to make us believe that by drilling new oil and gas we will be safe.

‘But in reality you are trapping us into an unaffordable energy system and you are destroying our future. The climate crisis will destroy our future.’

In response to the clip, Mr Kwarteng tweeted: ‘Shout and scream all you like, but I’m not going to put Britain’s energy security at risk by shutting off domestic oil and gas production.

‘We will need oil and gas for decades to come. Either we source more of what we need from the North Sea, or import more from abroad.’ 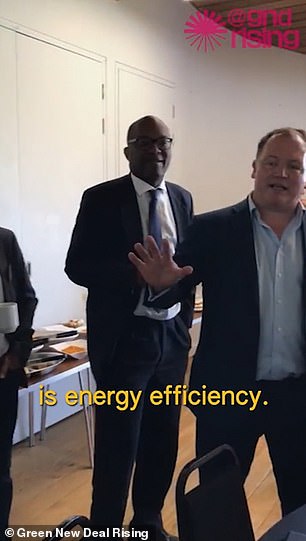 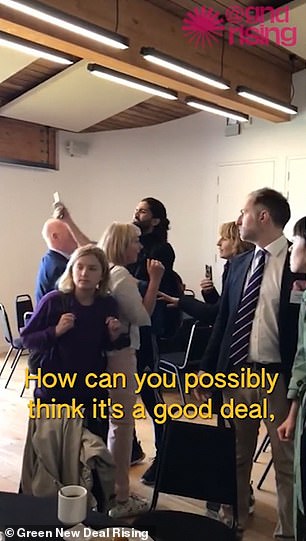 In the footage, one protestor shouts: ‘Millions of people are choosing between heating and eating. People cannot feed their children’ 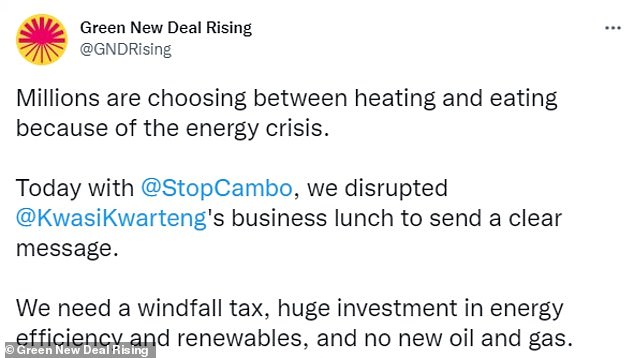 Alongside the video, Green New Deal Rising wrote on Twitter: ‘Millions are choosing between heating and eating because of the energy crisis’

Alongside the video, Green New Deal Rising wrote on Twitter: ‘Millions are choosing between heating and eating because of the energy crisis.

‘Today with @StopCambo, we disrupted @KwasiKwarteng’s business lunch to send a clear message.

‘We need a windfall tax, huge investment in energy efficiency and renewables, and no new oil and gas.

‘While the public are struggling to survive, @Shell_UKLtd just announced a record 7 billion pounds in profit.

‘By blocking a windfall tax on oil and gas companies and allowing the Jackdaw oil field to go ahead, @KwasiKwarteng is putting Shell’s profits before people’s lives.’

The group of six, including one cameraman, who posed as young Tories at the £40-a-head event, filmed themselves as they interrupted the Home Secretary’s speech and demanded she end her controversial Rwanda immigration policy.

They even posed for selfies with the cabinet minister before carrying out their highly-planned plot at the Bassetlaw Conservatives Spring Dinner.

Ben Mitchell, one of the disruptors at the event, tweeted his snap taken with Ms Patel, as he gloated on Twitter: ‘It was lovely to see you last night @pritipatel! You even thanked us for coming all the way up just for you… you’re so welcome.

‘We hope you now know that young people will not be silent while you sanction these racist and inhumane plans.’

Other protestors present included Fiona Quekett, a former grammar school student, who has a profile on the ‘Ethical Influencers’ website.

The vegan University of Leeds graduate, who studied robotics, has targeted politicians before, including Oliver Dowden on the streets of Blackpool in March this year and Tory MP Therese Coffey in September last year. 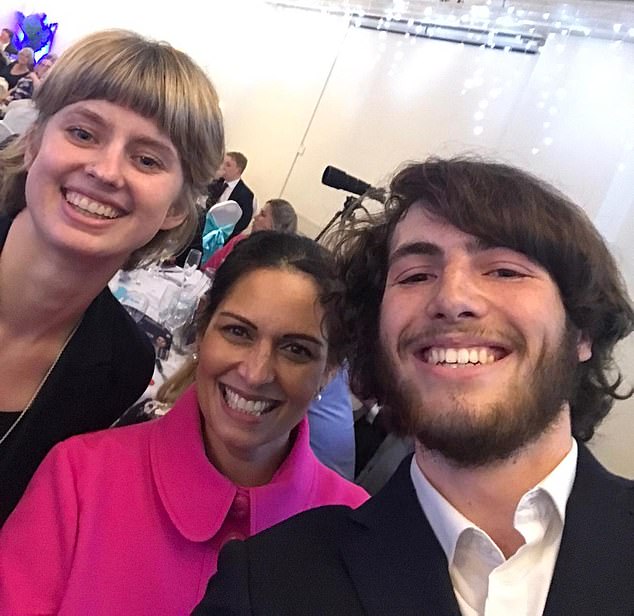 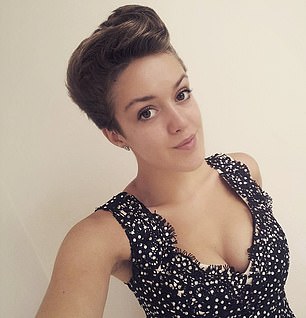 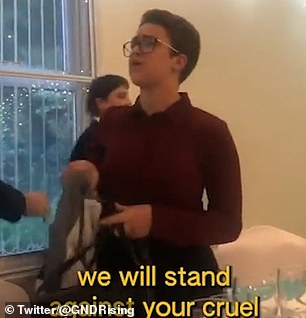 As a second protestor is ushered out, Fiona Quekett (pictured) gets up and brands the policy ‘cruel’, before they begin chanting: ‘Out, out, out!’ 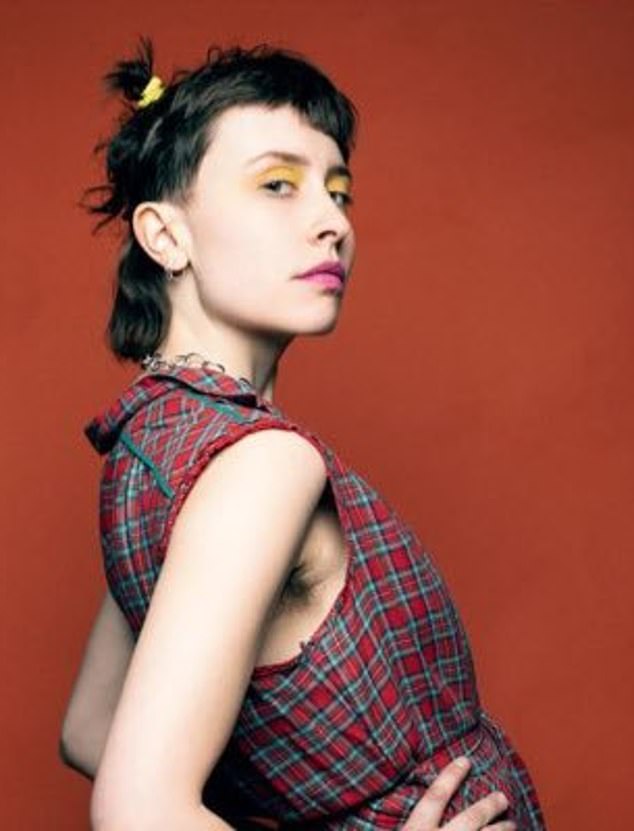 Quekett is due to go on trial in June for allegedly aggravated trespass at the Amazon warehouse at Symmetry Park, in Darlington, following a protest last November. They pleaded not guilty at an earlier hearing.

Meanwhile Holly Hudson, who is a leading member of the collective, is a graduate from the distinguished SOAS university, where she specialised in decolonial and anti-carceral movements in Britain.

She is also part of the ‘We Smell Gas’ group, a ‘decolonial activists’ and artists collective based across Europe.

The protestors, including union activist Laura Ho, took to social media to taunt Ms Patel, while some revealed they were behind the protest.

Ms Hudson wrote: ‘@PritiPatel, myself and other @GNDRising activists interrupted your dinner to condemn your violent, racist #RwandaMigrationPlan. Safe refuge is a human right. Refugees are welcome here.’

Quekett said: ‘Priti Patel’s Rwanda Plan, as well as the Nationality and Borders Bill, is vile and inhumane. We will stand against these cruel plans at every opportunity.’

Conservative MP for Bassettlaw Brendan Clarke-Smith told MailOnline: ‘In fairness they spent a fortune on tickets and even bought them for the raffle – presumably not to blow their cover. 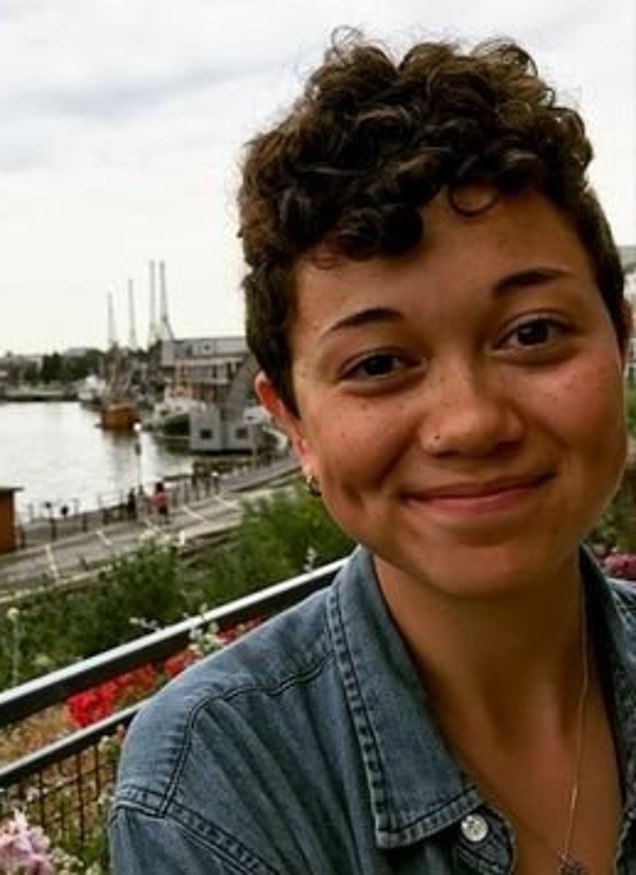 Union activist Laura Ho was one of the protestors 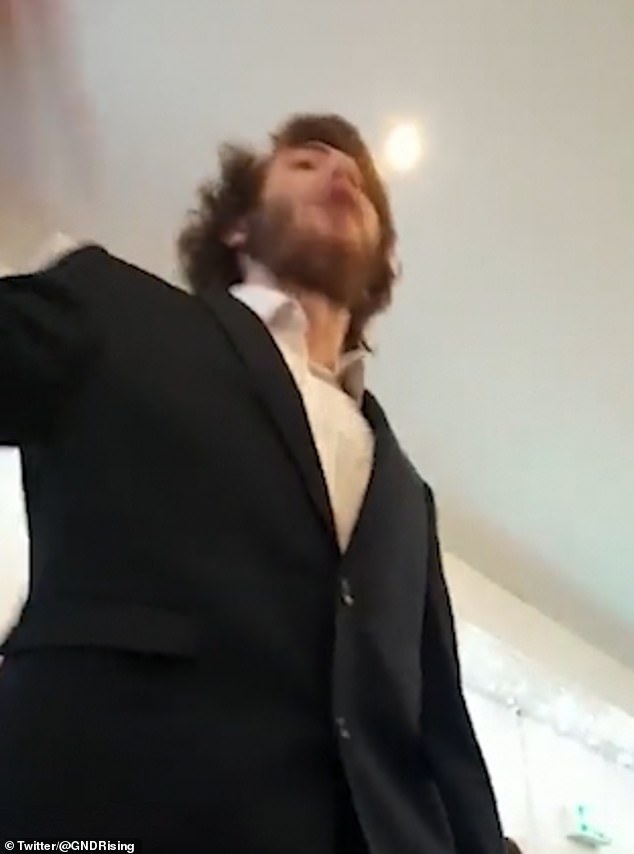 ‘So in effect they contributed financially to precisely the people they were campaigning against!’

In the video shared by Green New Deal Rising, Ms Patel dons a pink dress as she approaches the podium to give her speech.

She manages to say: ‘Good evening everybody, I actually just want to start…’, before a female protestor suddenly jolts up from her chair.

She shouts towards the stage: ‘Priti Patel your racist policies are killing people.

‘Your plans to send people seeking asylum to Rwanda are inhumane, they’re inhumane and are going to ruin people’s lives.’

The demonstrator is then escorted by security, but then another woman stands up from her chair and continues the protest, saying young people are ‘disgusted’ by the controversial immigration policy.

As she is ushered out, yet another protestor gets up and brands the policy ‘cruel’, before they all begin chanting: ‘Out, out, out!’