Independents have ‘questions to answer’ over China comments, Coalition says

The Coalition says two prominent independent candidates have “questions to answer” after they attended a fundraiser hosted by an unregistered Chinese community charity and, in one case, directly criticised the government’s approach to China.

Speaking from notes, Boele said there was fault on both sides in the breakdown of Australia-China relations but “in my opinion, the government is unable and unwilling to pick up the phone to Beijing”.

The Coalition has seized on those remarks, with campaign spokesman Simon Birmingham saying it was “scary to see a candidate in this election stand there grinning and nodding right next to someone parroting Chinese Communist Party talking points”.

Labor has softened its stance on a 5.1 per cent increase to the minimum wage after a political firestorm over the cost to employers, saying it is yet to decide whether to set the target in a formal submission if it wins the May 21 election.

A day after Opposition Leader Anthony Albanese said he “absolutely” supported a 5.1 per cent increase to prevent wages falling below inflation, his colleagues left room to retreat from the goal when the Fair Work Commission rules on the question in June. 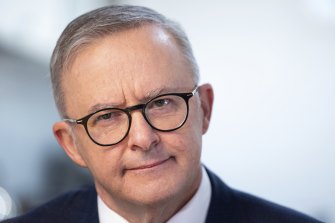 Opposition Leader Anthony Albanese has declined to say if he would put the 5.1 per cent figure in a formal case to the Fair Work Commission.Credit:Alex Ellinghausen

The move comes after Scott Morrison called Albanese a “loose unit” for supporting the wage increase and stepped up his attack on Labor’s economic management, as the prime minister tries to claw back support in the final 10 days of the campaign.

Morrison and Albanese face off over climate and border protection

Prime Minister Scott Morrison and Labor leader Anthony Albanese have faced off over border protection, climate change, integrity and key questions of character in a debate that saw both leaders keep their hostility in check.

Morrison sought to convince voters they could not trust Albanese to turn back asylum seeker boats or manage the economy, while Albanese declared that border protection policies would not change if he took power at the May 21 election.

The debate, called The Final Showdown, aired on the Seven Network from 9.30pm last night and featured measured comments from both leaders in a marked departure from the rowdier debate on the Nine Network on Sunday, which provoked criticism of the way the leaders interrupted each other.

The two leaders were at odds on the urgency of a national integrity commission, with Morrison saying he had a plan to create one but could not say when he would introduce the bill because it would depend on whether the opposition would support it.

Asked when he would put the bill to parliament, the PM said: “This year, if we can ensure that our bill can be passed.”

Albanese cited that argument as proof that the government did not deserve to be kept in power.

It’s Thursday, May 12. I’m Broede Carmody and I’ll be anchoring our live coverage of the election campaign for the first half of the day.