The BBC Weather meteorologist said Brits will get some respite after weeks of persistent hot weather as a Met Office’s thunderstorm warning kicks in. Temperatures are expected to remain into the 30s to start off the working week but will progressively lower as an area of low pressure moves over the country. And showers will slowly develop through England and Wales after hitting Northern Ireland and Scotland starting from Sunday.

Ms Keith-Lucas said: “We’ve got, thankfully, a bit of a change on the cards. And we are expecting to see some rain in some places, certainly over the next few days.

“Not much of that today across England and Wales, another dry day to come for many of us, especially in the south and east.

“It’s going to be the last of the very hot days today, the end of the heatwave is in sight now. Still hot and sunny but some thunderstorms developing today in the north and the west.

“We’ve still got that amber extreme heat warning across much of England and eastern Wales. Still some implications for the rest of the day, some heat-related health problems and perhaps some disruptions to travel as well.” 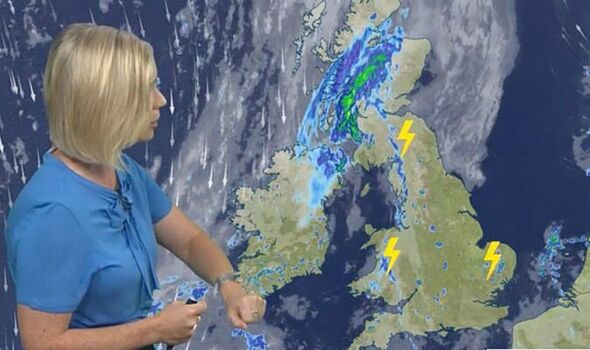 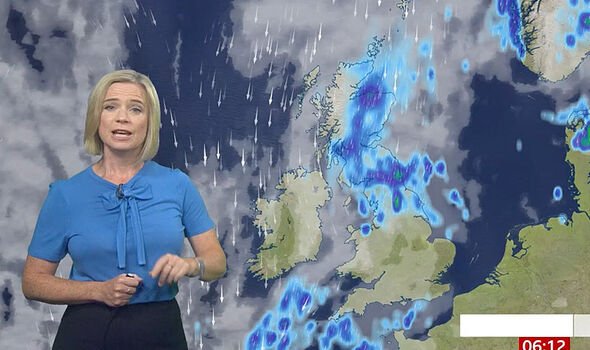 She continued: “A little bit of cloud lapping the shore for east England and northern and eastern Scotland.

“Some thunderstorms, perhaps some large hail and frequent lighting too. Most of us across England and Wales stay dry for a good part of the day and temperatures still at about 34C-35C, just a little bit cooler than it was yesterday for the north and the west.

“We could see some of those showers edging into Wales, perhaps southwest England at times but they’ll be fairly isolated.”

She added: “Through this evening and overnight, the showers in the north and the west start edging their way a little further southwards and eastwards.

“You may well hear the odd rumble of thunder overnight for Northern Ireland, perhaps into Wales as well.

“But it’s going to be quite warm and quite humid again, sticky if you’re trying to sleep tonight. 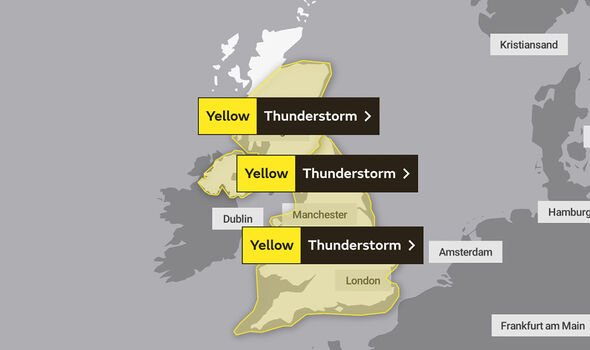 “Temperatures in the mid to high teens, perhaps no lower than 20C for parts of southern England and South Wales.

“Low pressure becomes a little bit more established in the UK as we move through the beginning of the working week.

“Monday we’re more likely to see some showers just edging a little eastwards. Could be one or two cropping up, for instance, across East Anglia during the afternoon, it could be heavy and thundery.

“And some really heavy downpours across some parts of northern and western Scotland. So certainly some more frequent showers through tomorrow than we’ve seen recently but still some areas will miss them altogether and stay dry.

“And we’re likely to have the eight consecutive day above 30 degrees towards the south and the east but turning a bit fresher in the north.”