But the continued restrictions, particularly the 25-kilometre limit on travel, meant regional retailers, restaurants, pubs and cafes missed out on much of the pent-up, post-lockdown shopping spree.

Analysts have warned it is still too early to assess the state’s ability to bounce back from the latest shutdown of its economy. 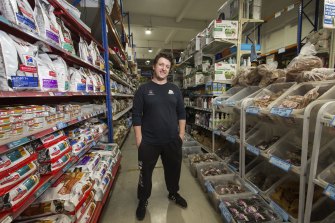 Damien Kirby, Manager of Upmarket Pets pet store in the Melbourne CBD, says sales were up over the weekend.Credit:Paul Jeffer

NAB sales data showed spending doubled across Melbourne during the Queen’s Birthday public holiday compared with the previous locked-down weekend. The figure was more than 26 per cent up on that recorded for the same long weekend in 2020.

Clothing sales soared 260 per cent, week-on-week, and were more than 26 per cent up on last year’s Queen’s Birthday. With socialising in private homes still banned, spending in Melbourne’s restaurants rose 208 per cent on the previous week and 58 per cent on the period last year.

The city’s pet shops and bakeries, allowed to open during the lockdown, were also stand-out performers in long-weekend trade. Spending in the pet trade was up 41 per cent on the previous week and 33 per cent on last year’s long weekend.

This analysis was consistent with a report this week from consulting giant Deloitte tipping continued strong spending from Australian shoppers.

Both Deloitte and NAB cautioned that it was still too early to tell how Victoria’s economy would recover from its two-week lockdown, and the consultants warned it might “throw a spanner in the works” of the national recovery.

Mr Saadie said the sales figures had not surprised him, given the “momentum building in the economy” but said the positive data masked a mixed performance between Melbourne’s CBD, the suburbs and the regions.

“Regional Victoria probably didn’t benefit as much from that bounceback as they would have given the 25-kilometre inhibitor that was put in place,” Mr Saadie said.

“Metro Melbourne numbers were way up compared to the regional towns.”

He said Melbourne’s recovery from its latest lockdown still had some way to go and that the picture was likely to remain uneven across the city.

Damien Kirby, who manages family-owned Upmarket Pets next to the Queen Victoria Market, said there was a definite rise in trade during the long weekend as his customers emerged from lockdown, but he was cautious about any exuberance prompted by the stronger trade.

“On a percentage basis, of course everyone’s going to be doing better than last year because it’s pretty hard to be doing worse,” Mr Kirby said.

“It was a busier weekend, that’s for sure, and Sunday was busier than Saturday, which is funny because normally Saturday is actually the busier day.”

Mr Kirby said there was a clear appetite among his customers for post-lockdown pet treats, but purchasing patterns retained a clear COVID-19 influence.

“You get some people who were stocking up on essentials like dog food, thinking, ‘What if we go back into lockdown; could I come back and buy it?’” he said.

The Deloitte Access Economics analysts noted retail sales across the nation in the first three months of 2021 were still above pre-pandemic levels and predicted the two big state economies, Victoria and NSW, would continue to lead the nation’s “consumer-led recovery”.

“That was the theory anyway, though Victoria’s fourth lockdown has thrown a spanner in the works,” the report’s authors wrote. “At the time of writing, it’s not known how big that spanner is.”

drove, End, lockdown, Melburni, of
You may also like: