Australian Super’s controversial proposal to develop the Kingswood golf club for housing is among the projects Victoria’s new Planning Minister, Lizzie Blandthorn, will be unable to touch while the government decides how to manage a conflict-of-interest headache between her and her lobbyist brother.

The government has made an informal commitment that Blandthorn will not deal with projects proposed by her brother’s clients while it works out how to manage the relationship. 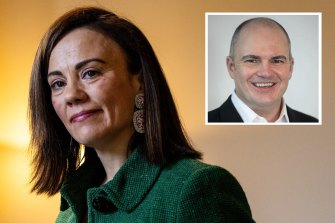 John-Paul Blandthorn is a director of Labor-linked lobbying firm Hawker Britton, whose clients – as listed on the public register of lobbyists – include many prominent property and infrastructure companies, among them developers Dennis Family Corporation, Intrapac and Caydon, and construction giant John Holland in its role building the West Gate Tunnel.

Three weeks after Premier Daniel Andrews appointed Ms Blandthorn to the sensitive planning role, his government is still to finalise a formal plan for her handling of planning applications from Hawker Britton.

Amid mounting concern among integrity experts about Victoria’s lax lobbying rules, The Age can also reveal that the state government has taken no action against lobbyists registered in Victoria since the former Brumby government introduced a code of conduct for the sector 13 years ago.

The Age is not suggesting there has been, or will be, any impropriety between the Blandthorn siblings, only that Ms Blandthorn’s appointment raises potential conflicts of interest.

The company is awaiting a ministerial decision on its controversial proposal to redevelop the Kingswood golf club in Melbourne’s south-east with 800 new houses, a scheme opposed by residents; the local federal MP, Attorney-General Mark Dreyfus; and the Kingston council.

The state government intervened in the Kingswood matter when the Kingston council abandoned the proposed rezoning in 2018 in the face of widespread community opposition. 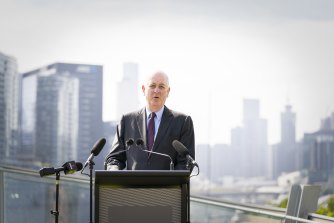 The government said last month that it was drawing up a “robust management plan” to ensure the independence of Ms Blandthorn’s decision-making.

In lieu of that plan, a spokeswoman confirmed Ms Blandthorn would not deal with matters involving her brother’s clients, nor talk to her brother about such matters.

“The plan is being finalised and in the meantime the minister isn’t considering any approvals where they might be a perceived conflict of interest.”

Former Court of Appeal judge Stephen Charles, a board member of the Centre for Public Integrity, said it was hard to think of a management plan that could resolve the conflict-of-interest issues stemming from the appointment.

“Even if the minister does not directly decide applications from Hawker Britton’s clients, the staff in her office and her department will be aware when an application involves the boss’s brother.

“Inevitably it means planning decisions which happen to favour her brother’s clients will be seen in the light of that relationship,” Charles said. “And the community will be left with questions as to the grounds on which a decision was made.”

“I have no issue with the minister as a person or politician, nor with her brother. But given their respective roles, this appointment was a very unfortunate one.”

Charles said the two developments highlighted Victoria’s comparatively lax lobbying rules, which are not enshrined in legislation and are similar to federal rules that the Australian National Audit Office described in 2020 as “light touch”.

“These things highlight that in Victoria we have a very unsatisfactory system for regulating lobbyists,” said Charles.

The Blandthorn situation also underscores the problem of the “revolving door” of well-connected political players moving between senior roles in government or political parties and working for businesses seeking favourable decisions from government.

The relationships are further complicated by lobbyists’ involvement in fundraising for political parties.

Hawker Britton, for instance, has tipped hundreds of thousands of dollars into the ALP nationally and in the eastern states in the past two decades, although contributions have been slowed by the tightening of donation laws.

The government has confirmed that no action has been taken against lobbyists registered in Victoria since the former Brumby government introduced rules for the sector 13 years ago.

Removing lobbyists from the official lobbyist register is the only real penalty the government has at its disposal for those who contravene the 2009 code of conduct.

The Victorian Public Sector Commission, which oversees the register, confirmed that it had not removed a lobbyist from the register.

In a written statement, the commission noted that it was common for lobbyists to remove themselves from the register “in circumstances when they determine they should do so”.

The commission maintains a public register of lobbyists but the Department of the Premier and Cabinet is responsible for the rules around the lobbyist code of conduct.