Follow
Home » Lifestyle » The house prices that are still rising: How inflation is blowing out building costs

The house prices that are still rising: How inflation is blowing out building costs

Property prices may be falling for the established housing market, but new homes are bucking the trend and have become the canary in the coal mine, as far as inflation goes.

Almost every category of building materials has become more expensive. Steel products are leading the way, jumping 42.1 per cent in the year ending March 2022, Australian Bureau of Statistics figures show.

It was followed by timber, board and joinery, which jumped 20.6 per cent in the same period.

The soaring coasts are a sharp turnaround and at odds with the falling prices of established housing market thanks to the sheer two-year strong demand for new homes, in the face of ongoing limits on materials and labour to build a house.

It all began when the majority of households pumped almost any spare dollar into their homes where they bunkered down once they realised they could hold on to their jobs during the pandemic and government support in the form of JobKeeper flowed through, as well as spending initiatives such as HomeBuilder.

As a result, the residential construction industry became the canary in the inflationary coal mine, according to Denita Wawn, chief executive of Master Builders Australia. 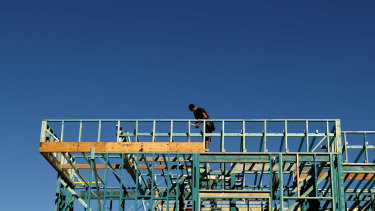 “It’s been a rollercoaster … two years ago, contracts were being terminated because everybody thought they would lose their job. All of a sudden, JobKeeper and HomeBuilder came along and people weren’t travelling, the building industry went from no work to too much work,” Wawn said.

Australians, who typically spend $55 billion a year travelling overseas, found themselves cooped up at home with cash to spare, she said.

“It had to go somewhere, so people were spending it on their homes,” Wawn said. “We were a bit of a canary in the inflationary coal mine. Inflation hit us hard 12 months ago.”

If Australians did not sign up to build a new home, they at least spent money improving it in some way, as shown by record building approvals and renovation spend. 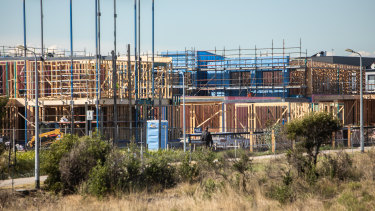 First was the sheer pickup in the demand for houses in speed and volume, Reardon said, then came the constraints on supply and labour that failed to meet that unprecedented demand, which was compounded by the fact most other developed economies had the same housing boom at the same time.

Before the pandemic, the construction of freestanding houses was slowing, with about 105,000 being built, the Association’s figures show.

By the end of 2021, that had increased by almost 50 per cent. That has now jumped to 80 per cent more homes under construction than pre-COVID, Reardon said.

“We have seen a 19 per cent increase in the value of the average home approved in Australia over the past 12 months to May,” he said.

“It’s been very difficult for builders to price the construction of a home … given the rapid increase in prices and builders typically bear that risk, which has been a challenging time for builders and businesses.”

At one point, when Canberra went into a snap two-week lockdown, it took just five days for roofing battens to run out on the entire east coast, as the city was the only location the product was produced, Reardon said.

“It’s those additional shocks that disrupted the efficient operations of the industry and have added costs throughout the supply chain. All those factors compound through, and those costs are borne through by those building new homes.” 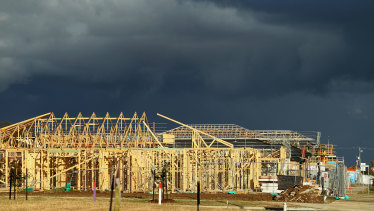 The sector has faced compounding problems when it comes to supply of materials and labour.Credit:Pat Scala

Home building in the next 12 months will remain at capacity, but the number of approvals will slow down as rising rates and the construction costs start to bite households, Reardon said.

Jon Stoddart, managing director of Stoddart group, Australia’s leading supplier and installer of products to the residential building industry, said the sector has been impacted at every step of the building process, compounding inflationary pressures. 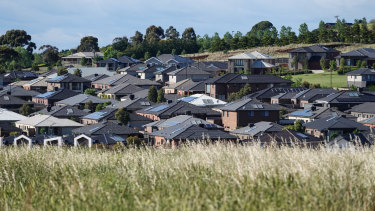 The cost of building a new house continues to rise, bucking the trend of falling property prices for now.Credit:Paul Rovere

“First there was the home stimulus grant. We sold a bucketload of houses then freight got dearer, then worldwide timber took off. To top that off, a lot of the timber that comes out of Russia was banned, that limited that supply,” Stoddart said, adding that they resorted to using steel frames as an alternative.

“If you can think of anything that can go wrong, it’s gone wrong. It’s not just one thing that’s occurred, it’s a multitude of things that have occurred,” he said.

“There is nobody to blame and the builders have suffered. They’re stuck on fixed-priced contracts and you’re seeing builders go broke.

“I don’t think anybody has done well out of this, whether it’s the builder, homeowner, supplier or the contractor.”