Fans heard booing as players take the knee at Wembley

Fans were heard booing ahead of England’s clash with Albania at Wembley as the squad took the knee while their opponents forgot the protocol and kicked off before England were finished.

Supporters largely got behind the wishes of the England squad who continue to take the knee before games, and the booing from some sections of the  crowd were silenced by the time the match kicked off.

There was confusion on the pitch though as Albania appeared to forget England’s plans to kneel ahead of kick-off and they started the game before England were ready. 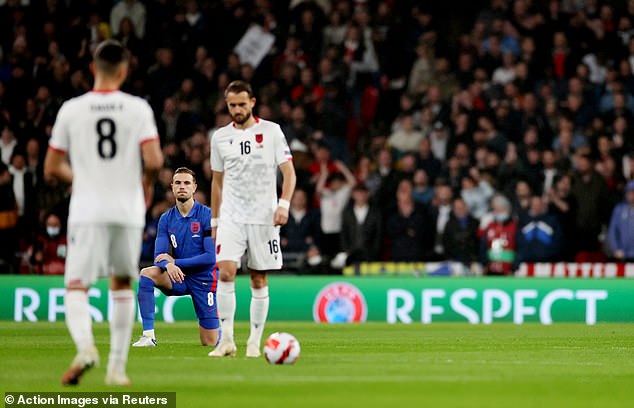 It is unclear if the boos were because of the apparent lack of acknowledgement of the protocol or because the England squad were kneeling.

The Guardian’s Scott Murphy said: ‘Some boos as England take the knee but only because the visitors forgot England’s pre-match protocol, kicking off with their opponents kneeling, too quick out of the blocks.

‘Albania re-spot the ball and take the knee as well. Warm applause. Then the kick-off that counts.’

The gesture of taking the knee became prominent in football after George Floyd, a black American man, was murdered by a police officer kneeling on his throat in May 2020.

However, the act has become an issue of contention among fans with some arguing it should be left out of sport while others feel it is necessary as part of football’s fight against racism.

England, who are playing in blue tonight, seemed unfazed by the confusing start to the match as it only took nine minutes for them to go 1-0 up. 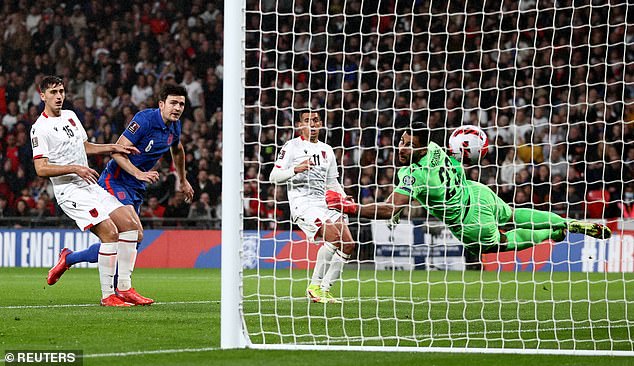 Harry Maguire headed England in front when he powered in James’ free-kick from eight yards.

Two goals then came in quick succession for England after Jordan Henderson bursts into the centre of the box and knocked Kane’s through ball into the net before the England captain fired the ball hard into the top right hand corner, despite the Albanian keeper getting a hand to it to put England up 4-0.

Minutes before half time, Kane completed his hat-trick in spectacular style when his acrobatic volley from Foden’s corner flew past Strakosha to make it 5-0 to England in stoppage time.

The relatively trouble-free start will have come as a relief for England after the chaos which ensued during their last match against Hungary.

The problems started after England’s players took the knee before kick-off in a gesture against racism – and in the Hungarian section of the crowd there was a banner protesting against the act of taking the knee.

Shocking videos from inside the stadium showed crowds of visiting fans clashing with Met Police officers.

Six people were arrested following the chaos, including one fan accused of racially abusing a Wembley steward, which was said to have sparked the violence.

Two more were detained inside the arena on suspicion of affray and assault on an emergency worker.

as, booing, Fans, heard, players, t
You may also like: