Saturday’s Champions League final between Liverpool and Real Madrid was delayed 36 minutes by security problems outside the Stade de France in Paris.

The game was originally scheduled to kick off at 9 p.m. local time (3 p.m. ET). But as 9 p.m. approached, thousands of ticket-holding Liverpool fans were stuck in bottlenecks outside stadium gates, some of which had been closed.

The source of the chaos was unclear. Videos showed Liverpool fans crammed together in congested areas. Some hopped barriers, presumably to escape the dangerous crush.

The Telegraph reported “painfully slow security checks caused a major bottleneck” among fans at one entrance, and that two and a half hour before kickoff, “checks had slowed to allow just a trickle of fans through and hundreds of fans were jammed together in a tight space.”

Police also used pepper spray to disperse crowds in some areas around the stadium’s perimeter.

The Associated Press reported that after kickoff, “fresh rounds of tear gas” were deployed by riot police to keep fans outside the stadium.

One Liverpool fan told the AP that the experience, for which many had paid thousands of dollars, was “absolutely horrendous,” and that fans were being pushed around. “It’s just madness,” he said.

Fans furious outside the Stade de France over hours of queues and crushes with the area struggling to cope with #UCLfinalpic.twitter.com/h0wibfvf4v

UEFA, the European soccer governing body and Champions League organizer, cited “the late arrival of fans at the stadium” in its in-stadium message announcing the delay, but cited “problemas de seguridad” — security problems — in its Spanish-language announcement and in official statements online.

Many Liverpool fans had, in reality, arrived multiple hours before kickoff, only to encounter the chaos en route to their designated gates.

A little before 9:10 p.m. local time, Liverpool players returned to the pitch to re-warm up. Real Madrid players joined them minutes later. After UEFA extended an initial 15-minute delay to 30 minutes, the match finally kicked off at 9:36 local time (3:36 ET), with the stadium mostly — though not completely — full.

The 2022 Champions League final was originally scheduled to be played in Saint Petersburg, but UEFA moved it in late February in response to Russia’s invasion of Ukraine.

This is a developing story and will be updated. 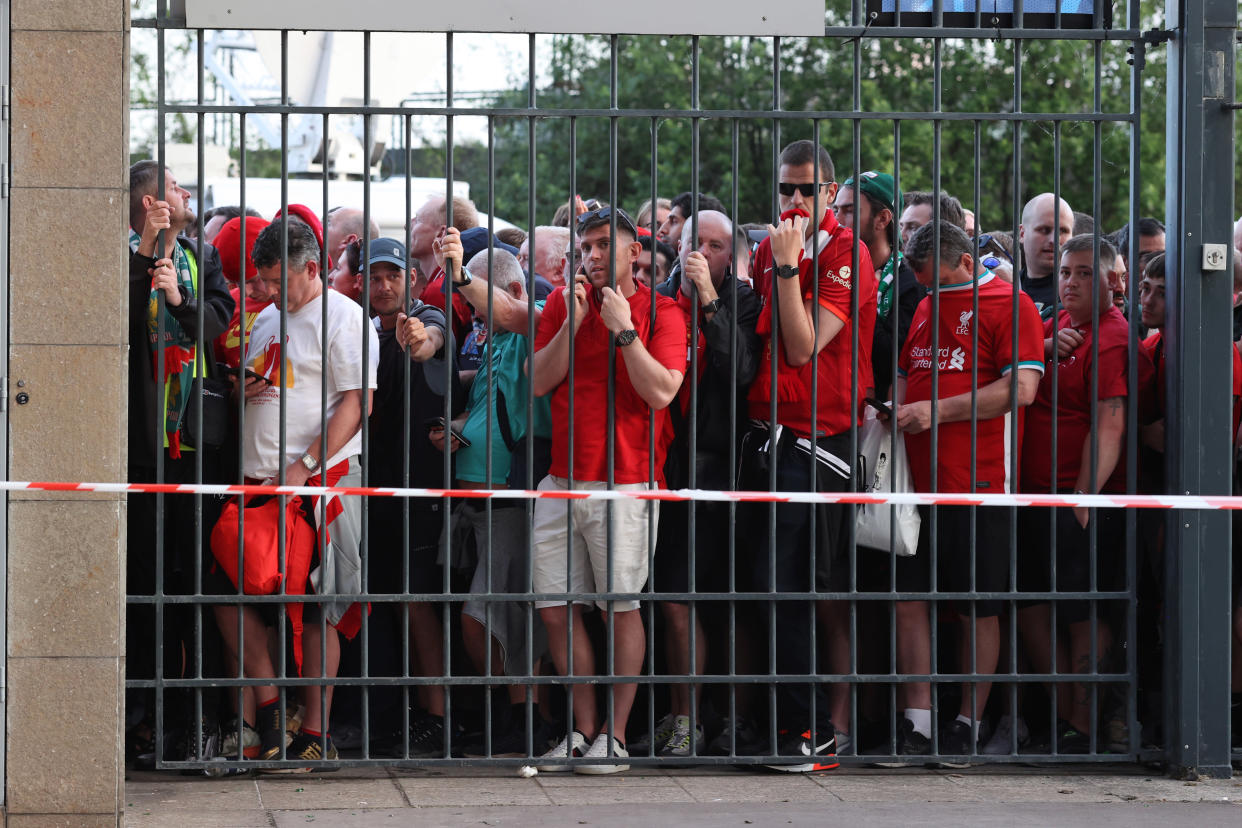