A huge blaze has been seen ravaging an Edinburgh landmark causing smoke to descend upon the Scottish city.

Firefighters rushed to the scene of the raging inferno at around 3pm to deal with the wildfire which is spreading through gorse bushes on Calton Hill.

The plant – which can be highly flammable – engulfed the city centre, which is a five minute walk away, in a layer of thick black smoke.

Scottish Fire and Rescue Service sent four fire engines to the scene and there were no reports of any injuries. 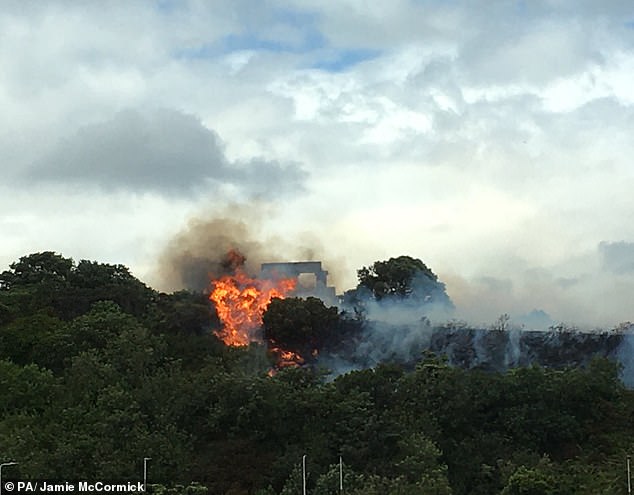 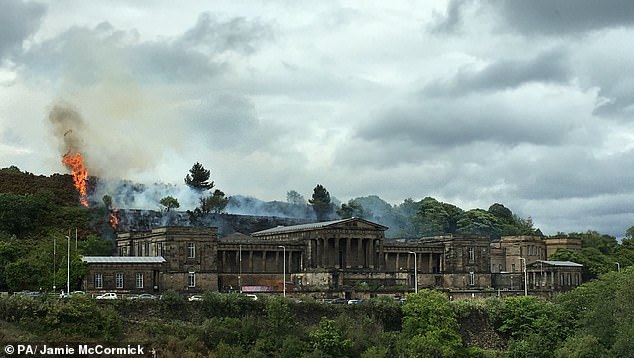 A Scottish Fire and Rescue Service spokeswoman said: ‘Four appliances are in attendance and we are currently tackling a large gorse fire.’

The area is home to the historic Royal High School building and the Nelson Monument, a column, which commemorates his death at the Battle of Trafalgar in 1805.

‘Wishing all the best to the emergency services at the scene.’ One person on Twitter wrote: ‘The air absolutely thick with smoke from the Calton Hill fire. Hope they manage to contain it and nobody gets hurt.’

It did appear to die down this evening as social media users shared pictures and videos of the red hot flames turning grey.

One social media user appeared to point to the dry weather as a reason for the gorse fire.

They said: ‘Everything is tinder dry. There’s been very low rainfall in Edinburgh for the last four months.’

The Royal Society for the Protection of Birds said that gorse can be ‘highly flammable’ if it’s not removed properly.