Florence Pugh and Zach Braff quietly broke up earlier this year — and the Don’t Worry Darling actress is only now sharing the news with the judgy public.

“We’ve been trying to do this separation without the world knowing, because it’s been a relationship that everybody has an opinion on,” Pugh, 26, told Harper’s Bazaar of the Scrubs star, 47. “We just felt something like this would really do us the benefit of not having millions of people telling us how happy they are that we’re not together. So we’ve done that. I automatically get a lumpy throat when I talk about it.”

The couple’s 21-year age gap was widely discussed when they first went public in 2019. The Little Women actress told the outlet she found it cruel and invasive.

“Whenever I feel like that line has been crossed in my life, whether it’s paparazzi taking private moments, or moments that aren’t even real, or gossip channels that encourage members of the public to share private moments of famous people walking down the street, I think it’s incredibly wrong,” she said. “I don’t think that people, just because they have this job, that every aspect of their life should be watched and written about. We haven’t signed up for a reality TV show.” 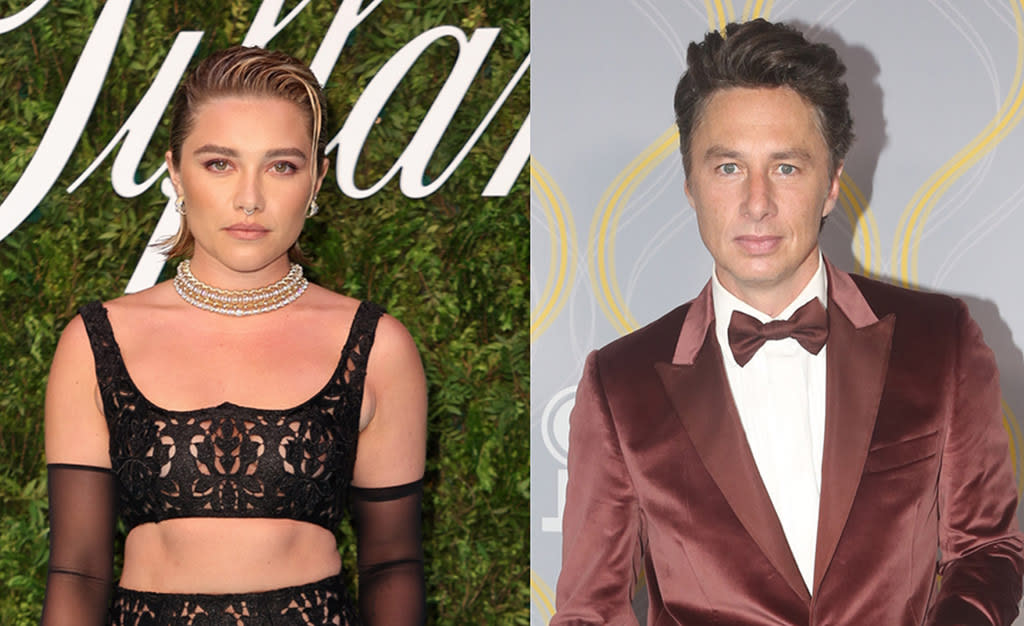 Before the breakup, Pugh worked with Braff on A Good Person, which is about a woman whose life falls apart after she’s involved in a fatal accident. Braff wrote the script with Pugh in mind and directed the project, which is out next year. She has nothing but positive words about the collaboration.

“The movie that we made together genuinely was probably one of my most favorite experiences,” she said. “It felt like a very natural and easy thing to do.”

And work remains her focus — and falling in and out of love some more along the way.

“Part of the reason we all do this is because we run away with the circus,” Pugh said. “I think that one of the pulls for me is that I get to see places, see people, befriend people, fall in love with people, and then move on and do it again.”

Pugh worked with Braff on his short film In the Time It Takes to Get There. The month it debuted — in April 2019 — they started being seen together publicly. Almost immediately there was criticism over their age gap, leading to her clapping back on more than one occasion. They were together in Los Angeles during lockdown. Pugh then resumed work, including on the high-profile project Don’t Worry Darling, a psychological thriller, directed by Olivia Wilde, in which she stars alongside Harry Styles.

At some point earlier this year, they went their own ways. There was definitely speculation about the pairing — as they no longer mentioned each other on social media — and in May rumors swirled after she was photographed on vacation with her former co-star Will Poulter. She denied she was dating Poulter, but didn’t discuss her relationship status with Braff, only taking issue with public “opinion[s] on who I should or shouldn’t be with.”

In the Bazaar interview, Pugh also spoke about Don’t Worry Darling, the project on which Wilde and Styles got together. While she didn’t confirm or address gossip that she’s upset that relationship has overshadowed the project, she did say that when the trailer came out, and her sex scenes with Styles became social media fodder, she was disappointed.

“When it’s reduced to your sex scenes, or to watch the most famous man in the world go down on someone, it’s not why we do it,” Pugh said. “It’s not why I’m in this industry. Obviously, the nature of hiring the most famous pop star in the world, you’re going to have conversations like that. That’s just not what I’m going to be discussing because [this movie is] bigger and better than that. And the people who made it are bigger and better than that.”

Pugh, who hasn’t seen the film, which is set to debut at the Venice Film Festival in September, said, “If I shout about one thing” about the project, “it’s that these people made that movie happen,” citing the crew and COVID nurses. “They came to work every day on time and fully respected the process.”