A fourth dose of Pfizer or Moderna’s Covid jabs provide an ‘substantial’ boost to immunity against the virus, UK Government-funded research shows.

The study of around 160 Britons aged 50-80 found the quadruple-vaxxed had up to seven times more T cells and two times more antibodies ‘over and above’ triple-jabbed people.

There were also no clear signs vaccines are getting weaker with each dose, allaying fears that ‘over-vaccinating’ could cause the jabs to lose their potency.

The finding paves the way for millions more Britons to get a fourth dose later this year.

While countries like Israel and Germany have been rolling out fourth doses to their entire population since March, currently only over-75s, care home residents and severely ill patients are being invited in the UK.

British health chiefs have confirmed an autumn Covid vaccine scheme will go ahead, although they have not decided which groups will be eligible.

The study did, however, reveal people who had high levels of antibodies and T cells before they were given a fourth dose only got a small boost to immunity. 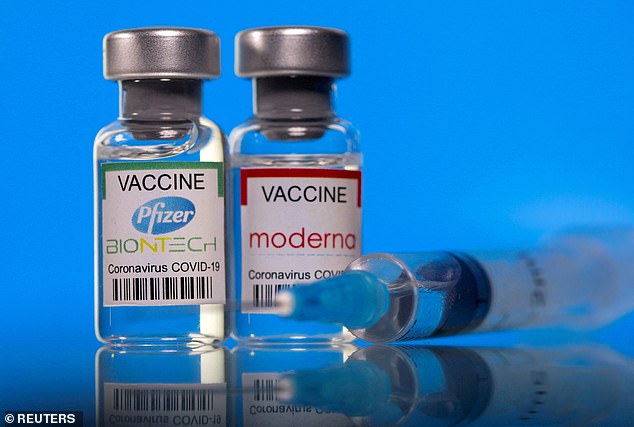 UK researchers, who monitored around 160 Britons in their fifties to seventies who had a fourth dose of mRNA vaccine Pfizer and Moderna, found the top-up jab gave a ‘substantial’ boost to antibody and T cell levels

These people may have recently been infected recently or have had their third dose more recently, meaning their immunity had not had as long to wane.

Professor Saul Faust, chief investigator of the Cov-Boost study, said this suggests there is a ‘ceiling effect’ on ‘how high you can go’ with immunity which needs to be further studied.

WHO IS ELIGIBLE FOR A FOURTH DOSE?

An extra spring dose is being dished out to some Britons around 6 months after their last vaccine.

This group is being given a fourth dose because they are at a higher risk of serious complications – hospitalisation and death – if they catch the virus.

The spring campaign aims to maintain high levels of immunity as a precaution against outbreaks.

The researchers said still have doubts about whether a fourth dose should be rolled out to younger groups, as they are at lower risk from the virus.

As part of the latest study, the team led by researchers at the University of Southampton, gave 166 triple-jabbed people between 51 and 78 a fourth dose of Pfizer or Moderna.

All participants had previously received two doses of Pfizer or AstraZeneca, followed by a third dose of Pfizer given around seven months ahead of the fourth dose.

Patients had a blood test two weeks after their fourth dose to check antibody and T cell levels.

Their results were compared to a blood test they took four weeks after their third dose.

The findings, published in the scientific journal Lancet Infectious Diseases, show fourth jabs boost immunity to levels ‘similar to, and possibly better than, peak responses after the third dose’.

Antibody levels after a fourth dose of Pfizer were 60 per cent higher than four weeks after the third dose, which the scientists said was a ‘significant increase’.

Among those who were given a fourth dose of Moderna, antibody levels were 2.19-times higher.

The team said T cell levels were also boosted 7.32-fold among Pfizer recipients and 6.22-fold in the Moderna group.

But the scientists urged against comparing the vaccine brands. They say the results could be influenced by what time of vaccine the participants were originally given two courses of. 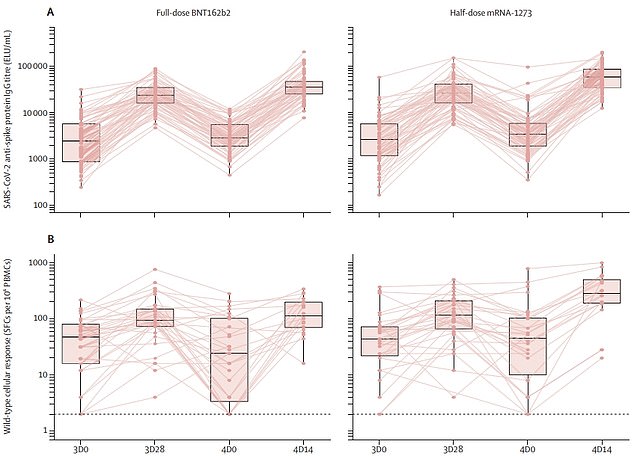 Antibodies work to stop an infection taking hold by attacking the virus, preventing it from binding to and infecting cells.

But if the virus breaches that defence, T-cells can identify and kill off infected cells to stop them spreading further.

What Covid? England’s outbreak slumps to lowest size since before Omicron took off

Restriction-free England’s Covid cases have plunged to the brink of a five-month low, official data revealed today in another justification for the Government’s lax strategy.

Virus-tracking analysts at the Office for National Statistics (ONS) estimate 1.59million people were infected in the week to April 30, down by a third on the previous week.

It marks the lowest projection since December 19, when No10 was facing pressure from doom-mongers to cancel Christmas yet again to save the NHS from Omicron.

The ONS — whose huge surveillance project offers ministers the only genuine reflection of the country’s outbreak now, given that the UK Health Security Agency (UKHSA) daily stats have been skewed by the axing of free tests — described the trend as a ‘considerable reduction’.

But it warned infections ‘remain high’, with up to one in 35 people carrying the virus last week and in the region of 300,000 still catching it every day.

Experts said the downward trend in infections among all regions and age groups was ‘very good news’, noting that while Covid is not over ‘we are past the worst’.

These white blood cells are thought to provide longer-lasting protection against the virus compared to antibodies which wane within months. They are also harder to measure and quantify.

Although vaccine immunity against infection wanes over time they still provide high levels of protection against severe illness.

Professor Faust, who is an expert in paediatric immunology and infectious diseases at the University of Southampton, said people of all ages in the study received a boost but the benefit was greatest for the elderly, whose protection wanes fastest.

However, the researchers noted that some participants in the study maintained high antibody and T cell levels even before having a fourth dose.

If this finding is spotted in other studies, it could be down to long-lasting vaccine protection or from a recent infection, the team said.

This group only had a small boost to their virus immunity from a fourth jab, suggesting there is a ‘ceiling’ to the amount of protection a person can have against Covid, the researchers said.

This finding is important for policy makers because it suggests some may benefit less from a fourth jab, they added.

Meanwhile, results showed that a sore arm and tiredness were the most complained of side effects from the jab.

Professor Saul Faust said the jabs provided ‘excellent antibody boosting over and beyond’ that seen after the third jab.

But he said it is not as simple as saying ‘we have vaccine so lets give it out’.

He noted that it is unclear what future Covid variants may take hold in the UK, future rollouts may require modified vaccines and it may be beneficial to wait and deploy another booster scheme in a future wave rather than now.

Any timeline on the decision of vaccines and the rollout would be made by the UK Health Security Agency and the Department of Health.

Health Secretary Sajid Javid, said: ‘This is further evidence underlining the importance of people coming forward for their booster as soon as they are eligible.

‘We’re able to live with Covid thanks to the protection provided by our phenomenal vaccine programme and a booster dose will top up your immunity to continue to keep you and your loved ones safe.’

Professor Andrew Ustianowski, a clinical lead at the National Institute for Health and Care Research, which funds the study, said: ‘The Cov-Boost study has continuously supported the UK’s booster vaccination programme and had further impact on how vaccines are administered globally.

‘We knew that it was important to offer a fourth dose to those most vulnerable earlier in the year. These new study findings support that decision and provides the public with the confidence that fourth doses are both safe and even more effective than third doses at boosting immunity against COVID-19.

‘It is thanks to the endless efforts and contribution of study participants and staff across the UK that we can keep discovering more about the use of vaccines, and they continue to play a pivotal role just as they have done throughout the pandemic.’