Estate agents cash-in on soaring rents: Foxtons announce income boost from lettings amid huge UK-wide spike in demand for rental homes – which has seen people queueing OVERNIGHT to be the first to view new properties

Estate agents Foxtons today announced a boost in income from lettings amid a huge UK-wide spike in demand for rental homes.

The London-based company said revenue from lettings transactions climbed 18 per cent to £29.2m in the three months ending September 30.

Increased demand from renters is rapidly pushing up prices, with data showing the average monthly rent in Great Britain is now £1,162 – up 11 per cent on last year.

While many people chose to move to coastal towns and the countryside during the Covid pandemic, analysts say they are now seeing a reversal of that trend.

Renters are now flocking back to major cities, with the likes of Manchester, Cardiff and Edinburgh among the areas where prices have risen the most in recent months.

Experts suggested young professionals wanting to be in the heart of cities, enjoying the pubs, restaurants and activities on offer, was a familiar movement – particularly following the end of lockdown restrictions.

However, there has also been an increase in older people downsizing from huge country properties to smaller city centre apartments in an effort to reduce household bills.

The demand for rented accommodation was demonstrated in Durham this week, where university students were forced to queue overnight and sleep on the streets in a desperate bid to be the first to view new properties. 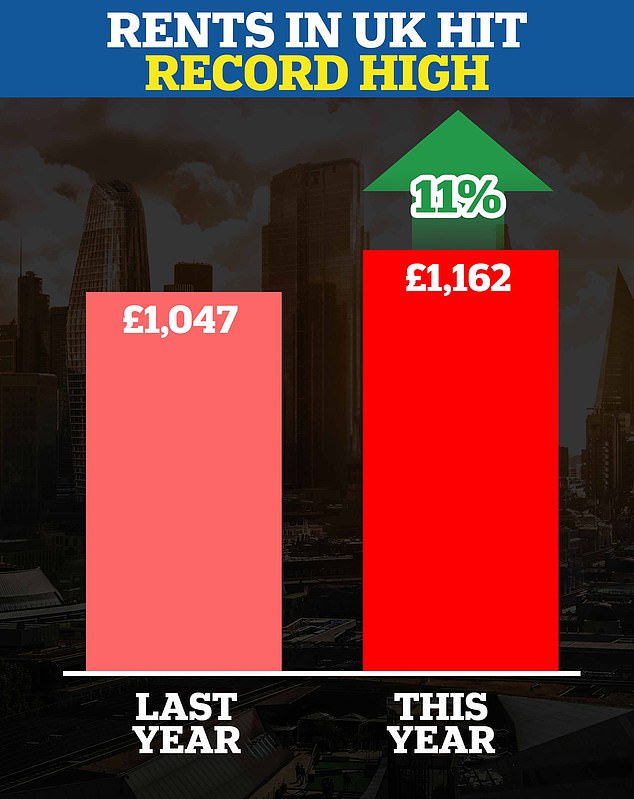 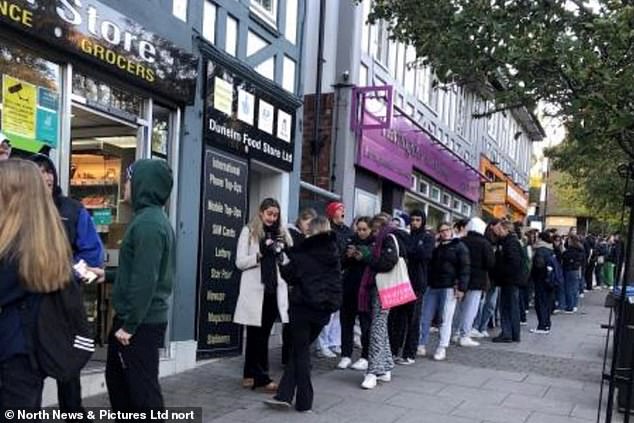 The demand for rented accommodation was demonstrated in Durham this week, where university students were forced to queue overnight and sleep on the streets in a desperate bid to be the first to view new properties 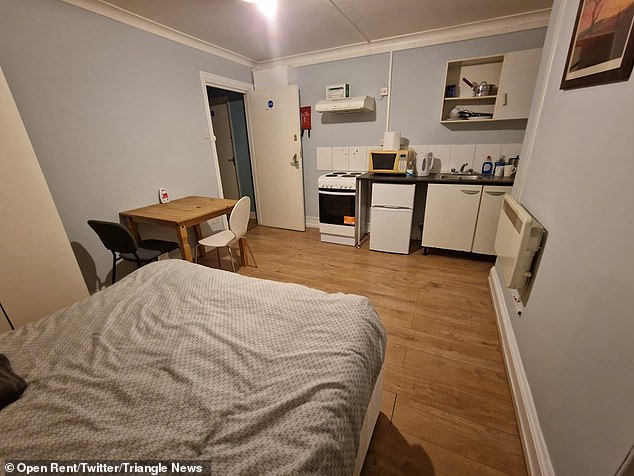 one example of the soaring prices is the discovery of a tiny studio flat in east London with a bed that faces an oven going on the market for a staggering £3,000-a-month 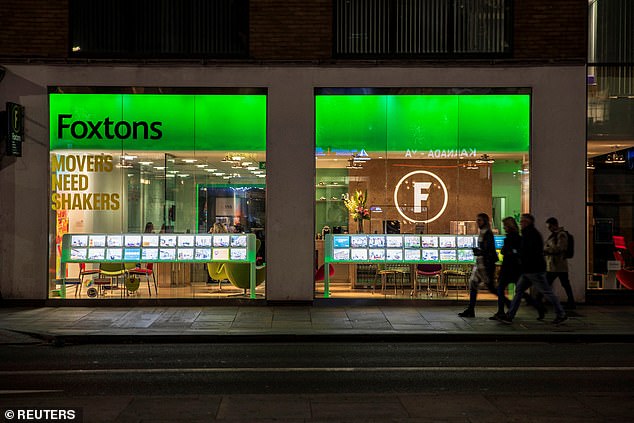 That appears to be the view of Foxtons, which flagged a ‘less certain’ sales market today, despite posting overall revenues of £43.8m for the last quarter – an increase of some 25 per cent.

This was driven largely by the success of its lettings business, which took £29.2m over the same period.

The strong figures saw its sale price soar as well by 14 per cent to £32.29 this morning.

The latest ONS data showed the rental price increase tenants have experienced from this year to last represents the largest annual growth rate since comparisons began in January 2016.

Sam Cullen, an analyst at Peel Hunt, told the FT the company’s results ‘confirm all the anecdotal stuff you have heard about rents: rental growth is hitting the roof’.

He said the trend is likely to continue in the short term, but warned that people ‘have only got so much disposable income’ to pay the rent.

Indeed, one example of the soaring prices is the discovery of a tiny studio flat with a bed that faces an oven going on the market for a staggering £3,000-a-month.

The insane price shocked would-be renters so much they questioned whether it was a typo.

The property in trendy Hackney, east London, consists of a double bed facing an oven, sink, under the counter fridge and microwave with a wardrobe and small table off to the side.

An open cupboard shows a paltry selection of pans while on the wall is a single drab picture of a solitary tree outlined against a sunset.

It appears grubby looking brown bedlinen – and a matching towel – is also provided.

It also has a bathroom, which isn’t pictured in the listing.

The bedsit is advertised as ‘a delightful one bedroom, one bathroom studio flat in a great location’.

It also has a parking space – but not a garden – and all bills are included in the price.

Incredibly, just over one kilometre away, a two bedroom flat with a balcony and separate kitchen is being advertised for just £315 more a month. 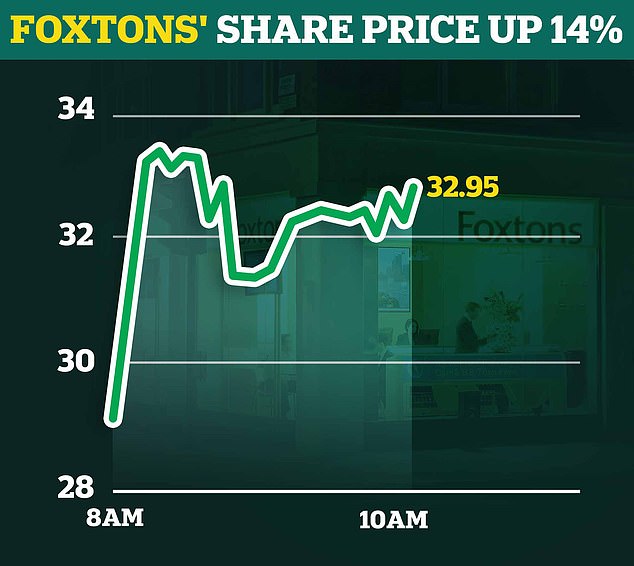 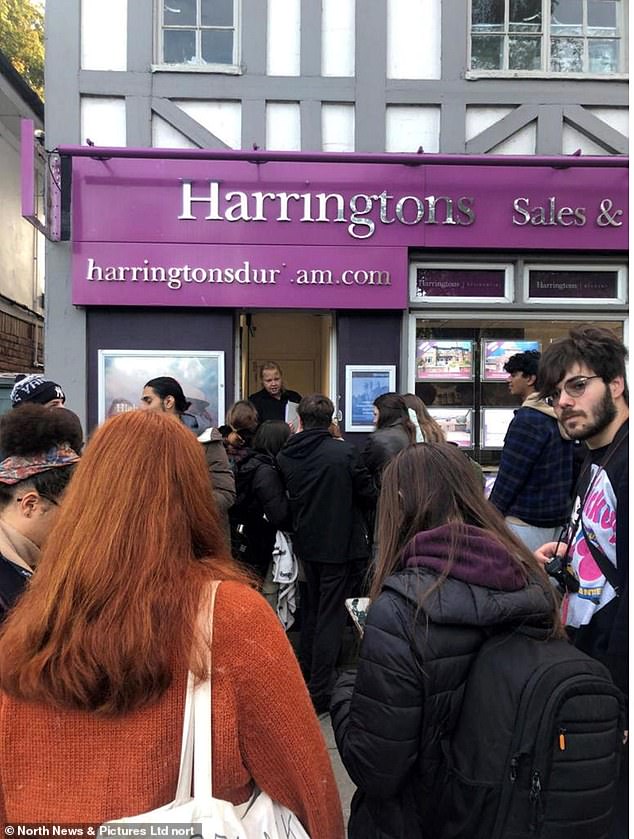 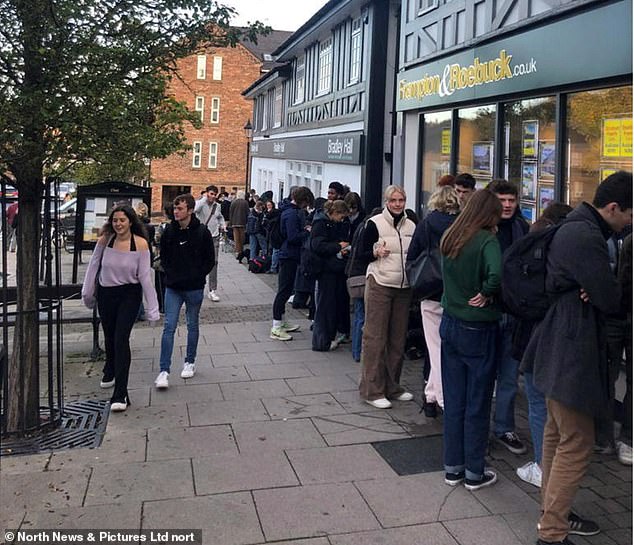 The queues are the result of letting agents releasing all their properties onto the market at once, known as a ‘drop’

It comes after shocking pictures this week showed long lines of desperate undergraduates snaking around the streets of Durham as they wait outside estate agents.

The queues are the result of letting agents releasing all their properties onto the market at once, known as a ‘drop’.

Students claim they feel as though they have no other alternative to join the queues, as houses in the city are scarce, with many homes being unaffordable.

A second-year student said: ‘Demand totally outweighs supply, and in a historic city like Durham there is no capacity to expand, so the situation can’t get better unless the university stop admitting so many students.’

The 93% Club, a student-led society dedicated to improving the experience of state school students at Durham, has launched a campaign to lobby the university and local government to fix the ‘broken’ housing system.

In a post on social media, the society explained its motivation: ‘The housing system here is not conducted with students’ best interests in mind, but those of landlords. This madness must end now.

‘Our campaign is not just for students, but for the whole Durham area. The university is a pillar of the community, and as such has a responsibility to help when people are in need.’

With the backing of Mary Foy MP and Durham’s student union, they have called for university officials to meet with students face-to-face to discuss housing issues.

Dan Lonsdale, the Educational Outreach Officer, explained: ‘The University’s response has been lacking. Our most recent communication with them saw the uni deny any influence on the private rental market – it is simply not good enough.

‘There is serious frustration, but [the 93% Club] would like to avoid it boiling over, hence we have called for a public meeting.’

The issue has not just been affecting students, but the Durham community at large.

One local resident said: ‘This is just ridiculous. I have been saying for years that the University had to stop expanding. It’s not the student’s fault but they are ruining the city, we’re overrun.’

A spokesperson for Durham University said: ‘We work hard to support our students across both academic and non-academic matters, including working with Durham Students’ Union and student leaders as appropriate.’ 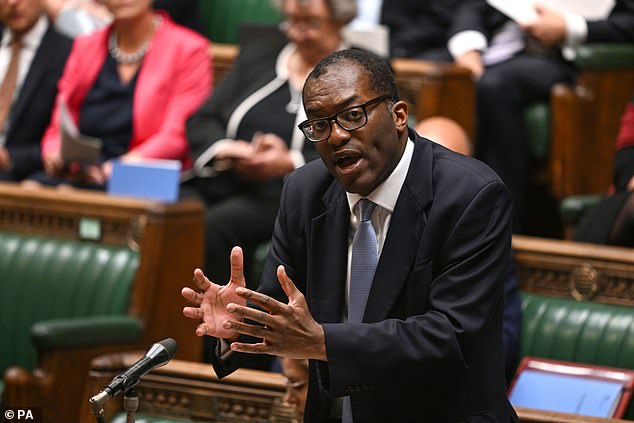 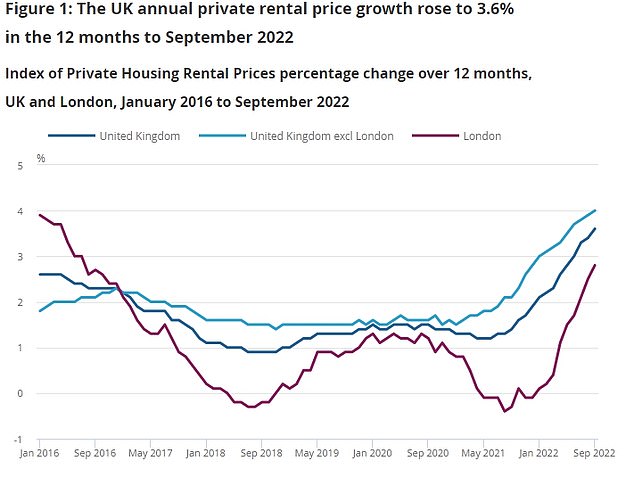 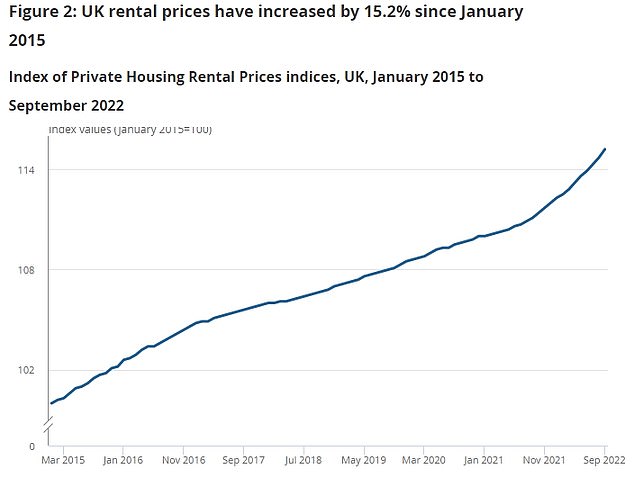 Speaking about the wider market this week, Rightmove’s Tim Bannister said there needs to be far more homes available for rent before the current levels of demand can be met.

‘It’s a real challenge for renters at the moment, as there are simply not enough homes available to rent to meet the demand from people enquiring,’ he said.

‘Ultimately, the gap between supply and demand is becoming wider across the board. We’ll need a significant addition of homes to come onto the market to even begin to balance the scales.’

John O’Malley, CEO at Pacitti Jones in Glasgow, said: ‘In essence younger professionals want the same things as they always wanted – to go out and have a good time – and this means being back in the heart of our cities and enjoying the social amenities available.

‘The dramatic rise in the cost of living means that we are now starting to see older people downsizing to apartments to reduce household bills. And this is something we expect to see more of.’

Gareth Atkins, Managing Director of Lettings at Foxtons, added: ‘The Lettings market in September continued to grow as we hit a new record high for the average rental price.

‘This demand was triggered by huge numbers of new renters looking for property; students physically returned to London post Covid, corporate relocations resumed at full pace and rising interest rates persuaded some buyers to continue renting in the immediate future.’