Italian mafia boss Giovanni Brusca, whose grisly crimes include dissolving a boy’s body in acid, has been released from prison this week after a 25-year reduced sentence.

The notorious Sicilian mafia turncoat, 64, has confessed his role in more than 100 murders, including the assassination of anti-mafia judge Giovanni Falcone in 1992.

He was arrested in 1996 and became an informant for the state four years later, helping prosecutors in their crackdown against the Cosa Nostra – the Sicilian Mafia group. He was given a reduced sentence as a result of his collaboration.

Brusca, who was known as the ‘people slayer’ and was a key operator in the Cosa Nostra, was released on Monday from Rome’s Rebibbia prison.

But his release has left many Italian people outraged, while the relatives of his victims have been left grieving and in anguish. 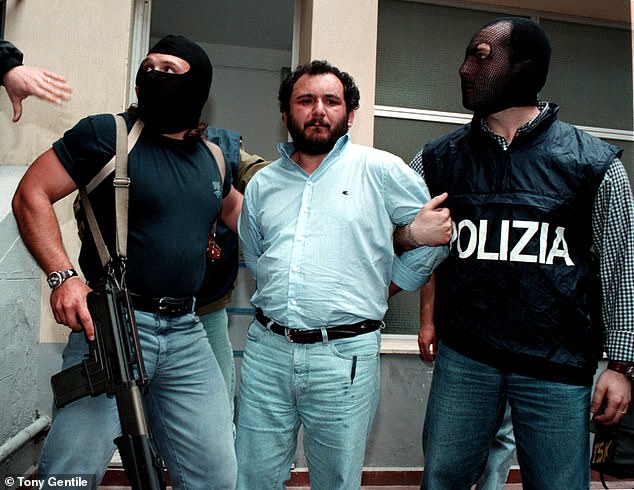 Italian mafia boss Giovanni Brusca (pictured), whose grisly crimes included dissolving a boy’s body in acid, has been released from prison this week after a 25-year sentence

Brusca, who had already been granted temporary leave from prison on several occasions, will be on parole for four years, Italian media reported.

The mobster, who went by the nickname ‘the Pig’, detonated the car bomb that killed legendary prosecuting magistrate Falcone, who dedicated his career to overthrowing the mafia.

Falcone’s wife and three police bodyguards were also killed in the attack after their car drove over a section of highway outside Palermo packed with 400 kilos of explosives.

The wife of one of the bodyguards killed, Tina Montinaro, told Repubblica she was ‘indignant’ at Brusca’s release.

She said: ‘The state is against us – after 29 years we still don’t know the truth about the massacre and Giovanni Brusca, the man who destroyed my family, is free.’ 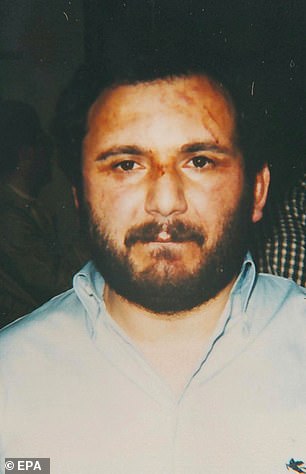 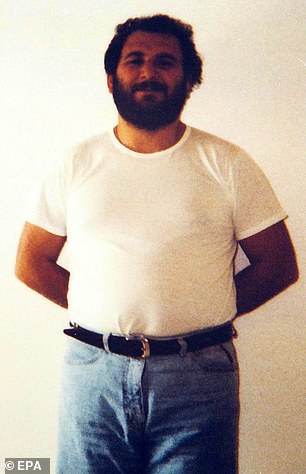 The notorious mafia boss (left and right), 64, who turned state informant has confessed his role in more than 100 murders, but his release has left many Italian people outraged 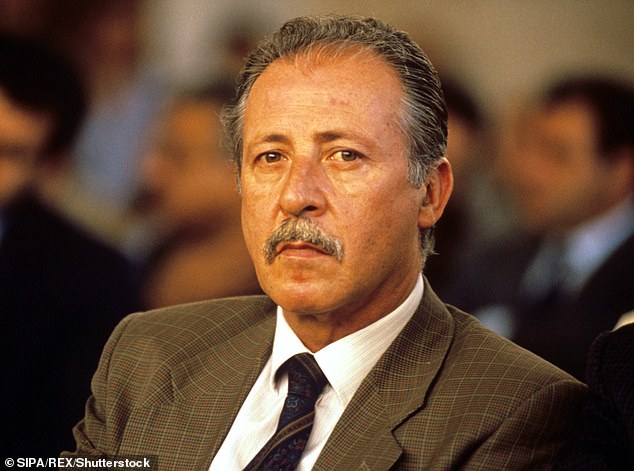 Brusca, who was known as ‘the Pig’, detonated the car bomb that killed legendary prosecuting magistrate Falcone (pictured), who dedicated his career to overthrowing the mafia

While Rosaria Costa, the widow of another policeman, told Corriere della Sera: ‘He [Brusca] has collaborated with justice only to get the benefits, it was not a personal, intimate choice.’

And Maria Falcone, the sister of the esteemed anti-mafia judge, said she was ‘saddened’ by the news of Brusca’s release.

She said although she was distressed by the news, ‘it’s the law, a law moreover wanted by my brother and that should be respected’.

The brutal killing of Falcone was followed two months later by that of anti-mafia magistrate Paolo Borsellino, which is now termed ‘the massacre of Via D’Amelio’.

Borsellino and five members of his police escort were killed when a car bomb went off, and it was deemed one of the most notorious episodes in Italy’s long and violent struggle against organised crime.

One of Brusca’s most horrifying crimes included the death of Giuseppe Di Matteo, who was dissolved in acid because he was the son of a mafia informant.

Giuseppe was kidnapped at age 12 in 1993 in retaliation for his father collaborating with authorities and was held in a house for more than two years. 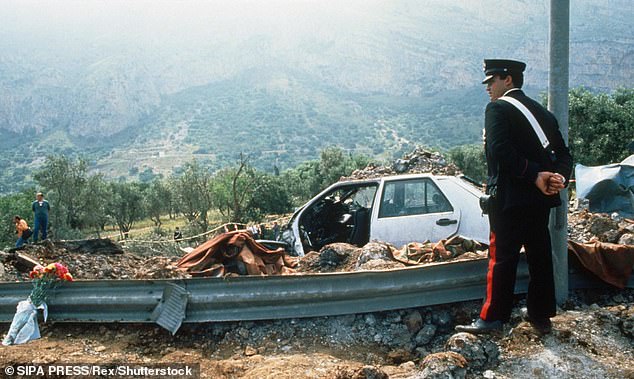 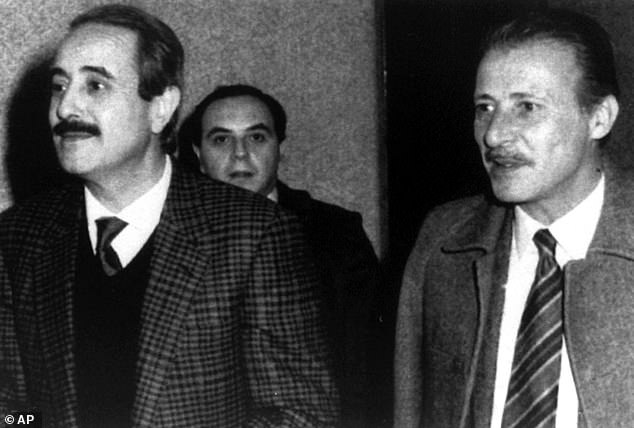 The brutal killing of Falcone (left) was followed two months later by that of anti-mafia magistrate Paolo Borsellino (right), which is now termed ‘the massacre of Via D’Amelio’

The order to kidnap Guiseppe came from notorious mafia boss Salvatore ‘Toto’ Riina, who died in an Italian prison in 2017, aged 87. He was serving 26 life sentences for at least 150 murders.

The boy was held in squalid conditions and brutally tortured for nearly 800 days between 1993 and 1996 in an attempt to force his father, Santino di Matteo, to withdraw his anti-mafia testimony.

Giuseppe, then 14, was strangled and his body was thrown into acid in what police called ‘one of the most heinous crimes in the history of the Cosa Nostra’. The final order to ‘get rid of the puppy’ was given by Brusca, who was Riina’s right-hand man.

Guiseppe’s father Santino di Matteo had been a member of the Cosa Nostra clan, but turned against them following his arrest for taking part in the murder of Falcone.

Brusca later became a state informant on several deadly Cosa Nostra attacks carried out in the 1980s and 1990s, and testified in a trial over alleged negotiations between Italian officials and mobsters to stop the bombings.

After becoming an informant, he told prosecutors: ‘I’m an animal. I worked all my life for Cosa Nostra.

‘I have killed more than 150 people. I can’t even remember all their names.’

Speaking of Brusca’s release, chief anti-mafia prosecutor Federico Cafiero De Raho said: ‘Regardless of what one may think of the atrocities he committed at the time, there was a collaboration…

‘Let us not forget that he gave information on bombings both in Sicily and in mainland Italy.’ 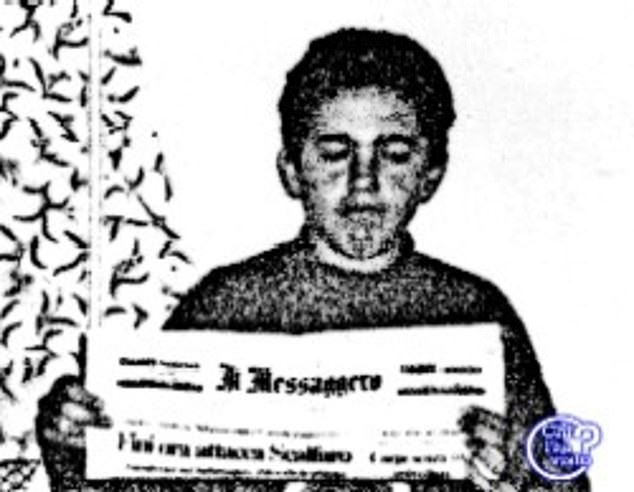 One of Brusca’s most horrifying crimes included the kidnap and killing of Giuseppe Di Matteo (pictured), 14, who was dissolved in acid because he was the son of a mafia informant

‘Clearly, the judges believed this was the appropriate jail term,’ he added.

But several politicians from both sides of Italy’s political divide have still condemned the release of the ruthless mafia boss.

The leader of the centre-left Democratic Party, Enrico Letta, called it a ‘punch in the stomach that leaves one speechless’.

‘This is not the ‘justice’ that Italians deserve,’ said Matteo Salvini, head of the right-wing League which leads in opinion polls.

Meanwhile, Claudio Fava, the president of Sicily’s anti-mafia commission, doubted the value of Brusca’s information provided to authorities about the 1992 attack on Falcone.

‘Certainly now he won’t do it anymore.’