STUDENTS have scooped record GCSE results this year with the number of top grades soaring to almost one in three.

A whopping 28.9% of all entries were awarded a level 7 or above – the equivalent of an A under the old system. 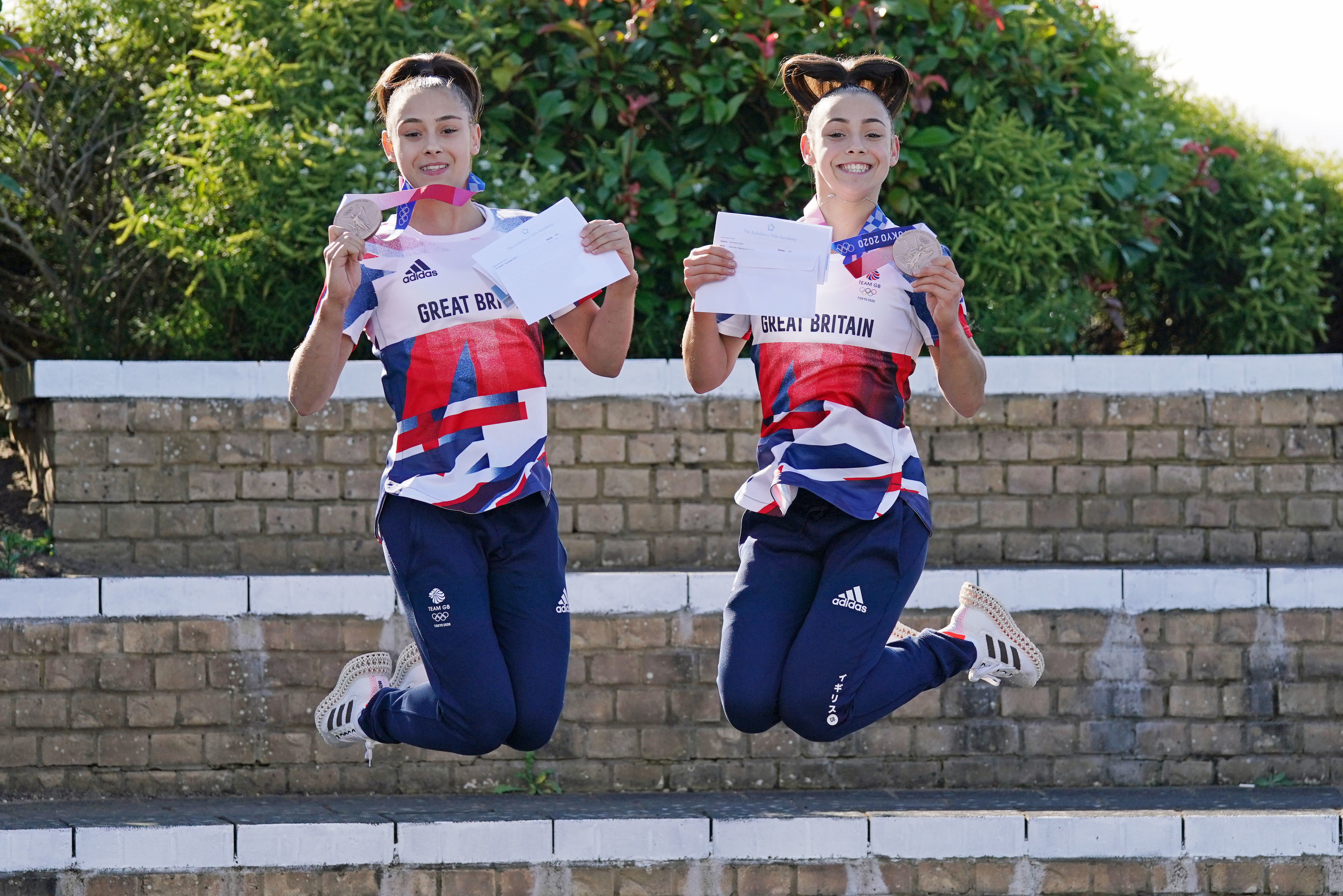 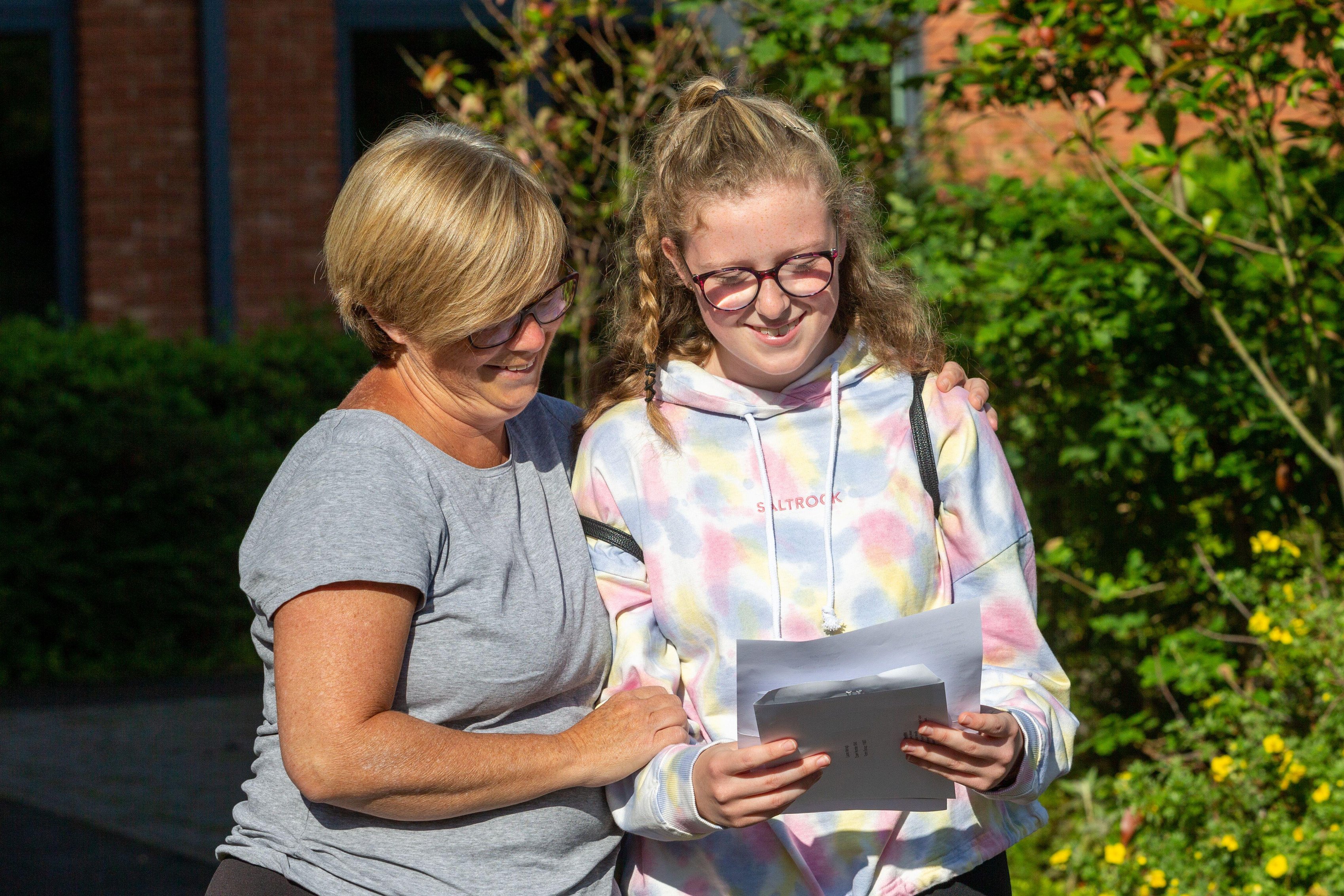 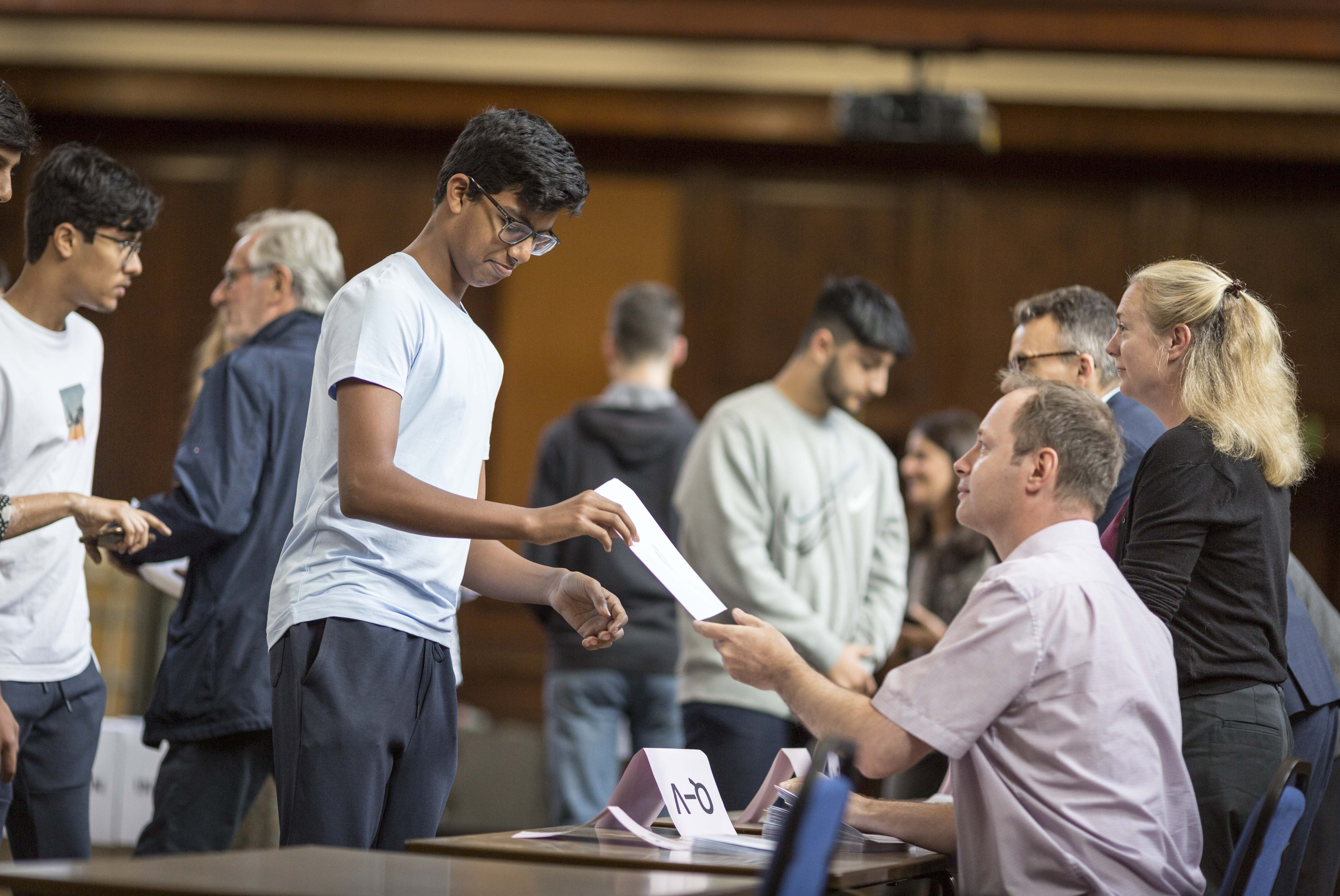 That's up from just 20.8% two years ago, when exams were last held.

The results will heap more pressure on ministers to come up with a plan to correct runaway grade inflation.

Just like for A-levels, pupils taking their GCSEs this year have been given marks based on teacher assessments.

Just over three quarters of papers were scored at a level four (C grade) or above, compared to 67% back in 2019.

Some 3,606 students in England received straight 9s – the highest mark available – up from just 837 two years ago.

The results also show girls have pulled further ahead than boys when it comes to getting the top grades, opening up a 9% gap.

And just like with A-levels it is private schools which have seen the biggest increase in students scooping the highest marks. 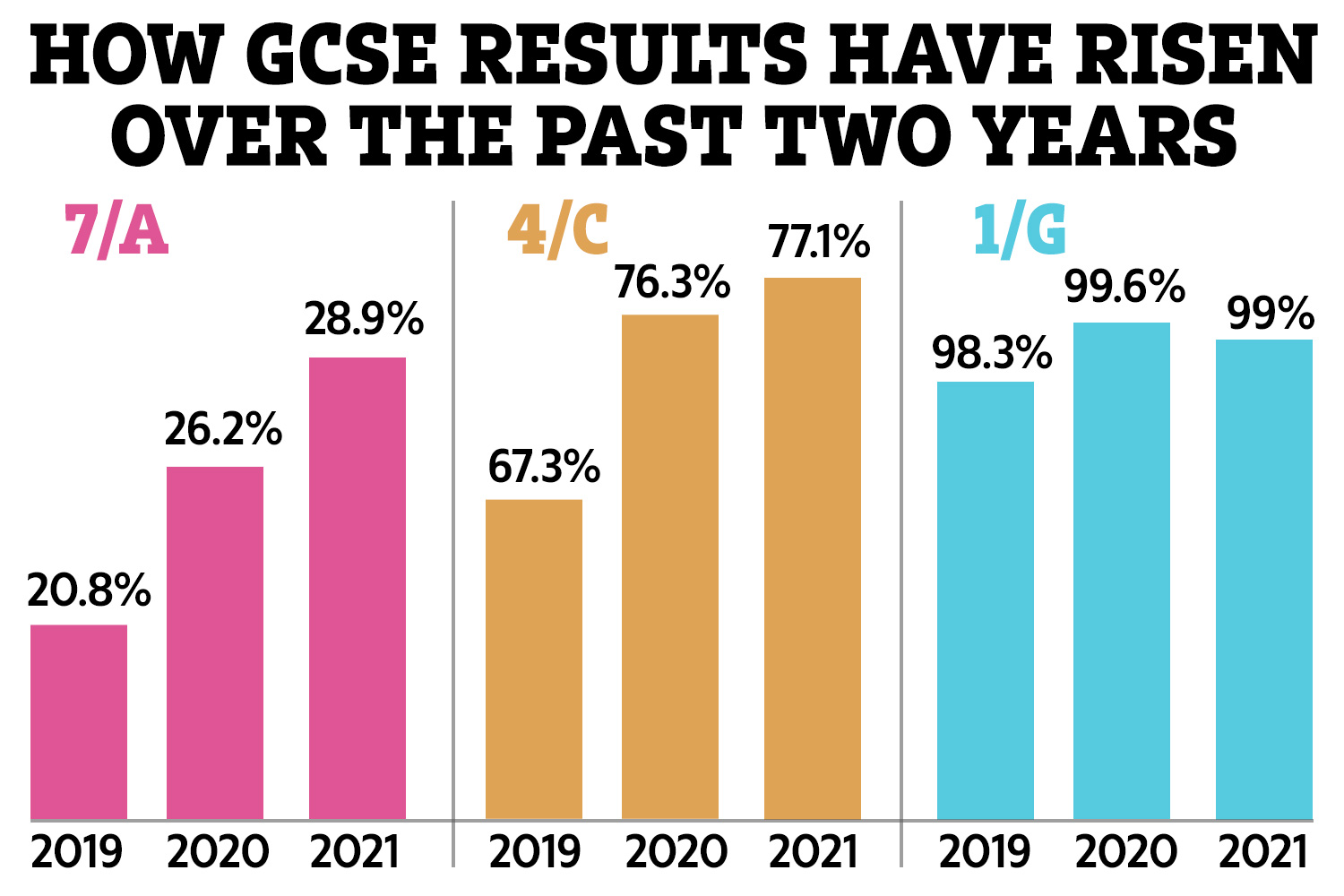 Officials have admitted teachers are more likely to give their students the "benefit of the doubt" than exam moderators.

Schools minister Nick Gibb said students had faced an "exceptional year" of disruption which had to be taken into account.

He said: "If you think about a teacher assessing a group of students, say 10 of them were very capable of getting an A grade.

"But in a normal year, of those 10 a proportion would actually only get a B come exams.

"Of course, with all the evidence the teacher has they are going to allocate As to all 10 of those students.

"That's why inevitably you'll get a higher proportion of top grades in this system this year.

"But they are still valid grades that are backed up by very real evidence of the performance of those young people." 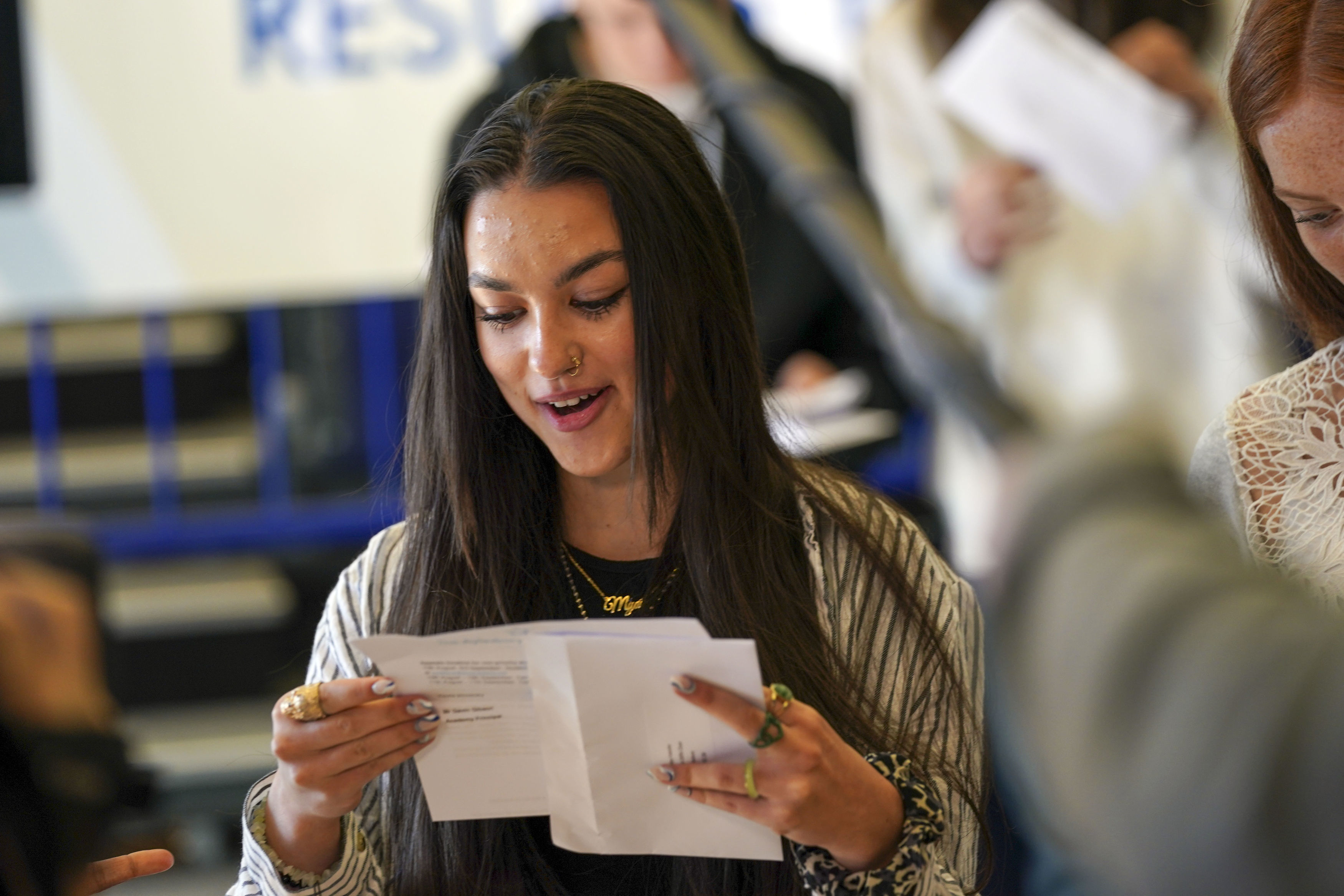 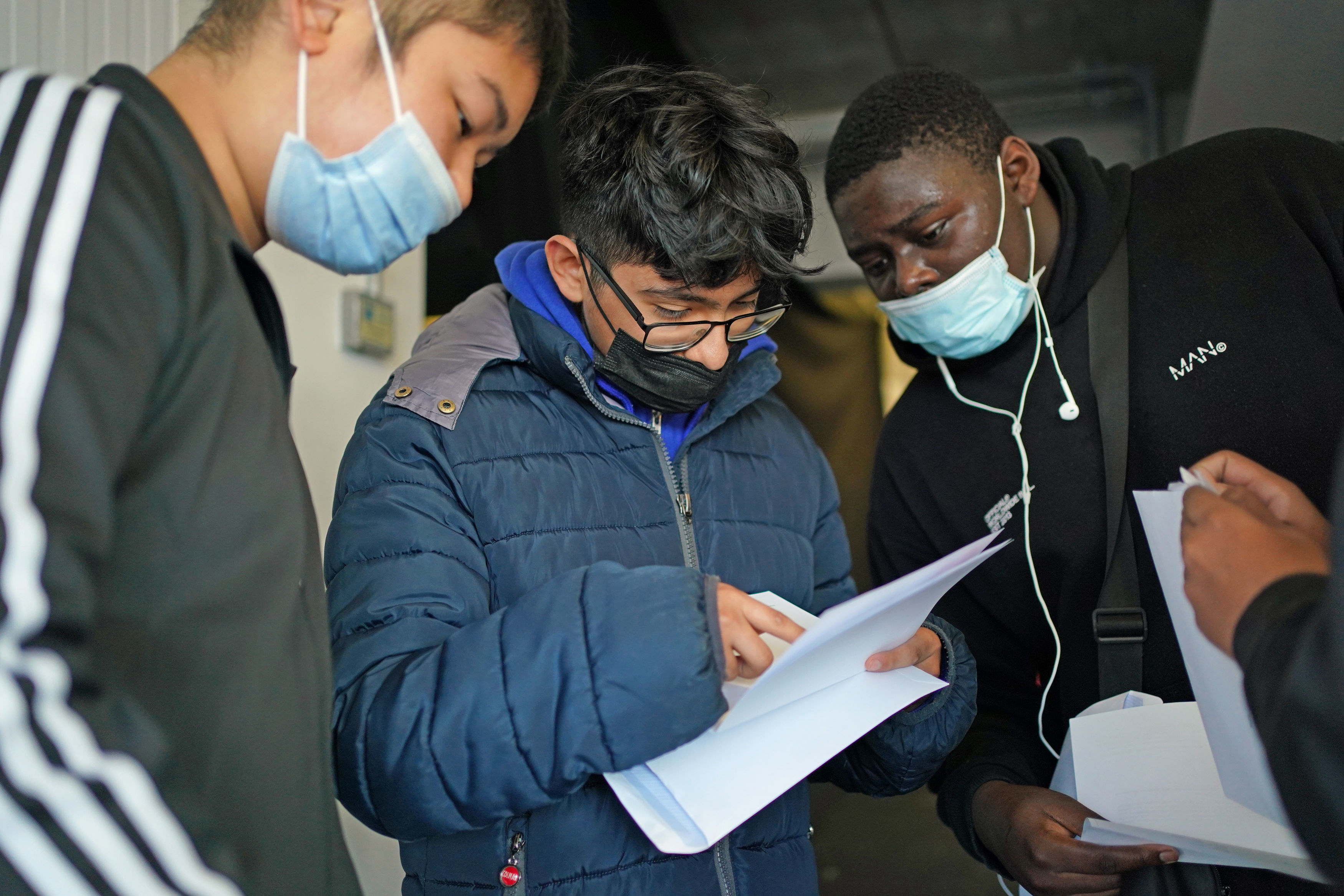 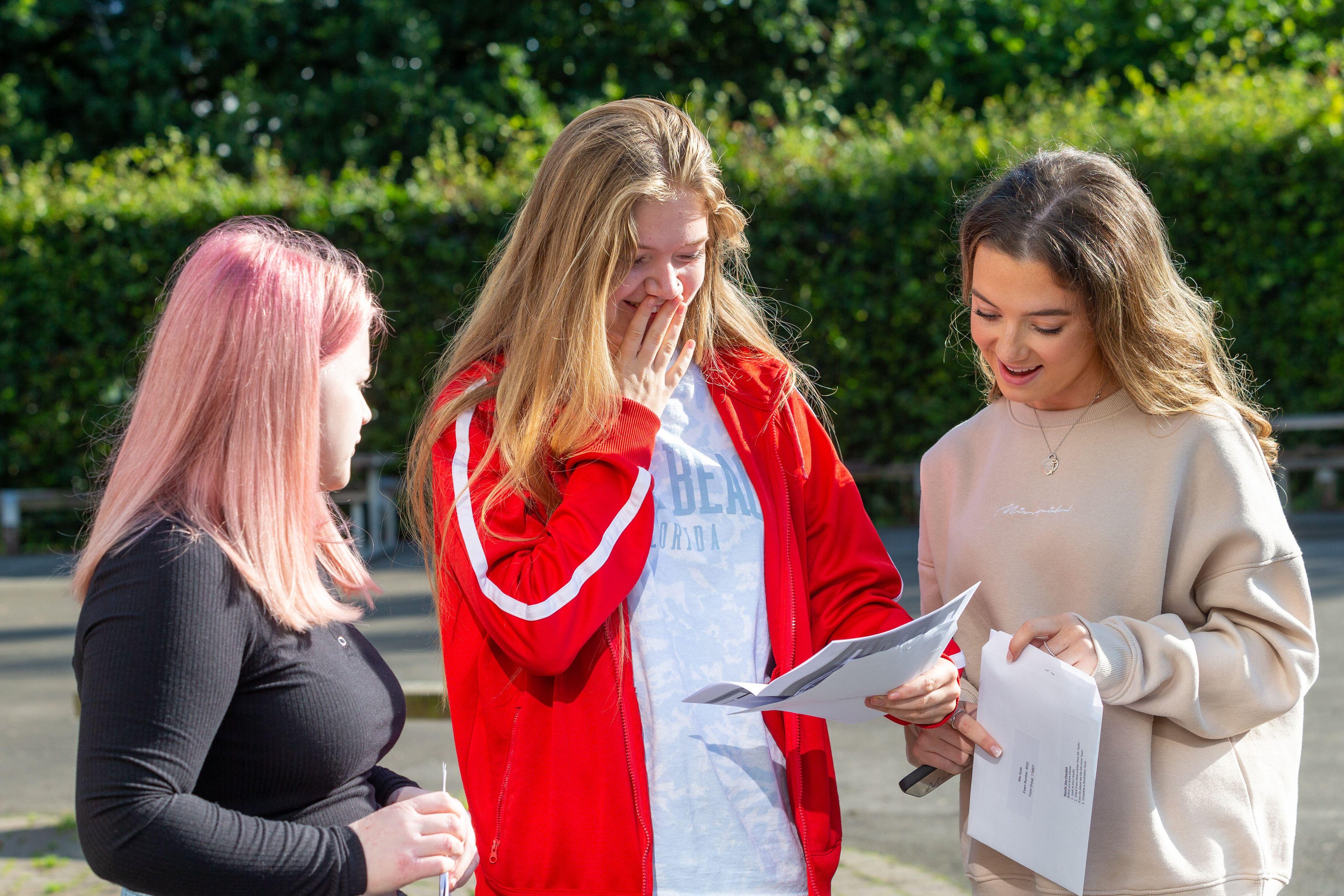 Mr Gibb said ministers are determined to reintroduce exams in 2022 and have a "long-term" plan to tackle grade inflation.

Examinations were replaced with teacher assessments this year to take account of the learning lost during lockdown.

Last year a computer algorithm was initially used to grade papers, but it was ditched amid chaos and thousands of downgraded results.

This summer teachers in England submitted grades for their students based on mock exams, coursework, and in-class assessments.

Random and targeted sample checks of evidence were then carried out by regulators.

But experts have raised fears that grade inflation this year could affect youngsters' future life chances.

Lee Elliot Major, a professor of social mobility at Exeter University, warned universities and colleges are more likely to turn away borderline students.

He told the Times: "My worry is for pupils who may have just missed out on grades, which can determine whether you get a sixth-form place and what A-level subjects you can study.

"Sixth-form admissions are the Wild West of the education system, with every sixth-form determining its own selection criteria.

"A particular concern for me are the prospects of poorer pupils who will not necessarily be backed up by sharp-elbowed parents."

"It is important to emphasise that the system of teacher assessment under which these pupils have been assessed is different from public exams and is therefore not directly comparable.

"The GCSE grades awarded to these young people are a fair and accurate reflection of their performance under the robust system used this year, which will allow them to progress to post-16 courses and apprenticeships in the normal way."

Dr Philip Wright, director-general of the Joint Council for Qualifications, added: "I would like to congratulate all students receiving their results today.

"The impact of Covid has undoubtedly provided a difficult chapter in their education journey and their resilience is to be applauded."

He added: "Teachers used their professional judgment and submitted the grades and evidence in good time for us to check and award grades today.

"Their efforts will allow students to swiftly progress on to the next stages of their education or training." 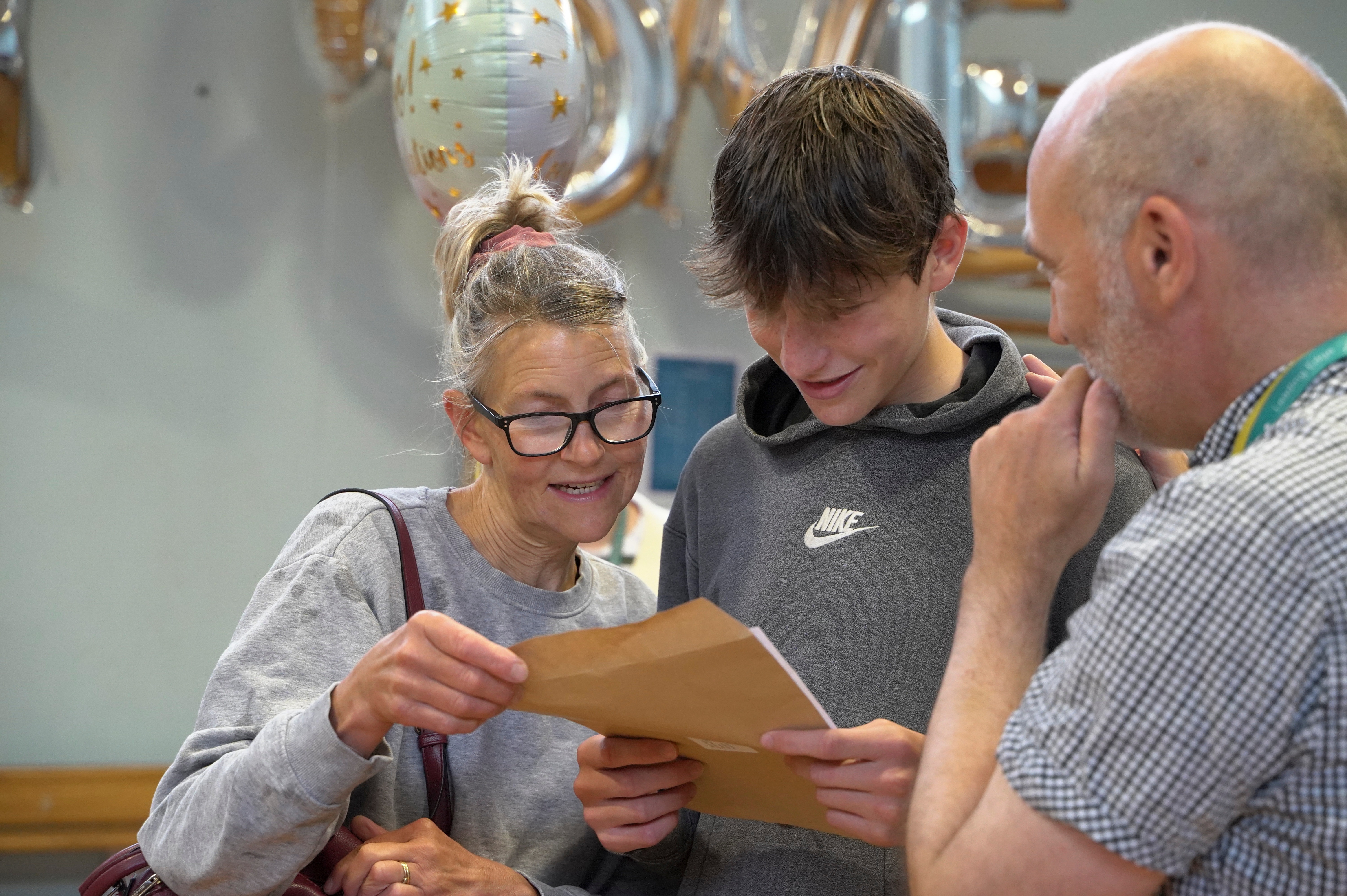 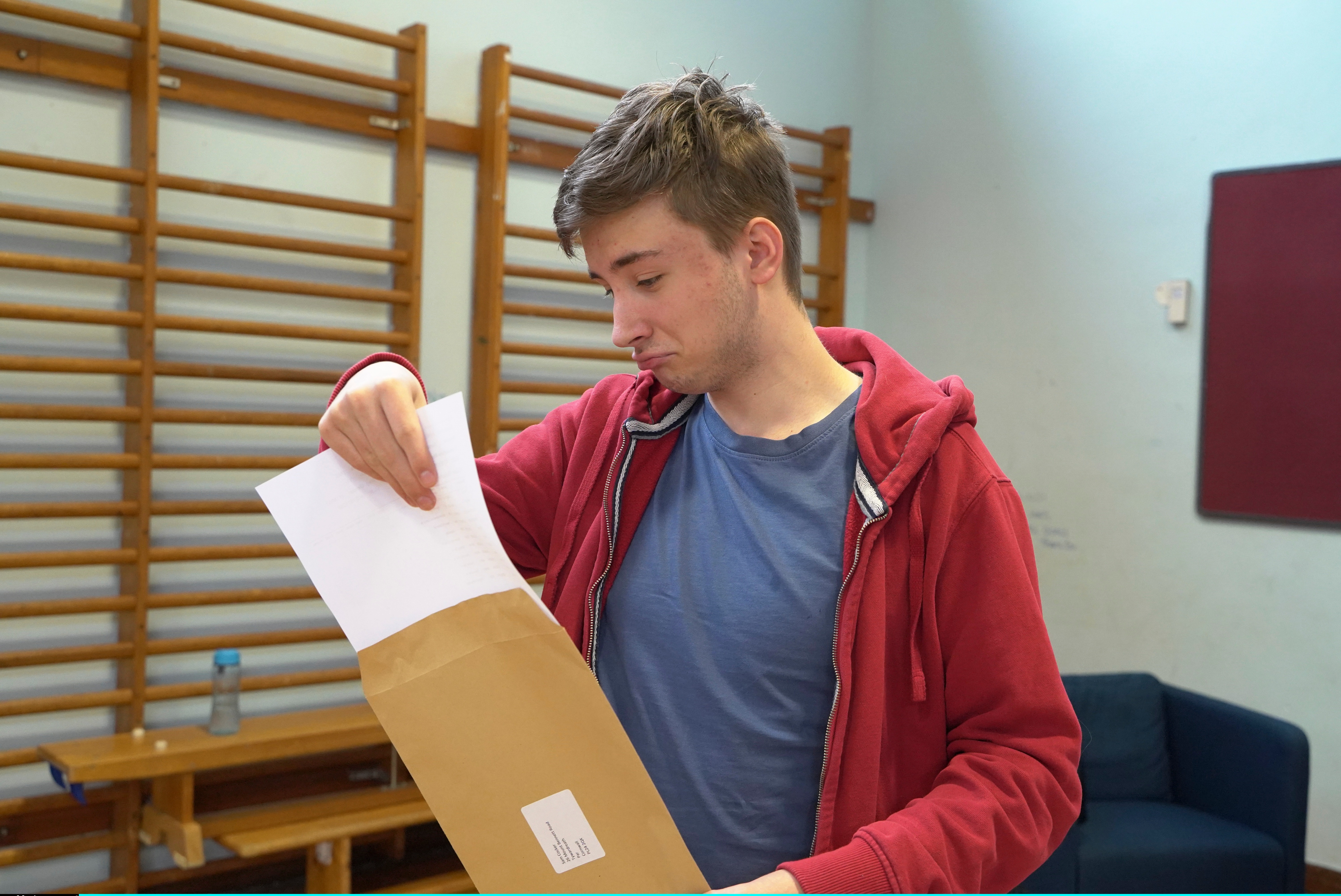 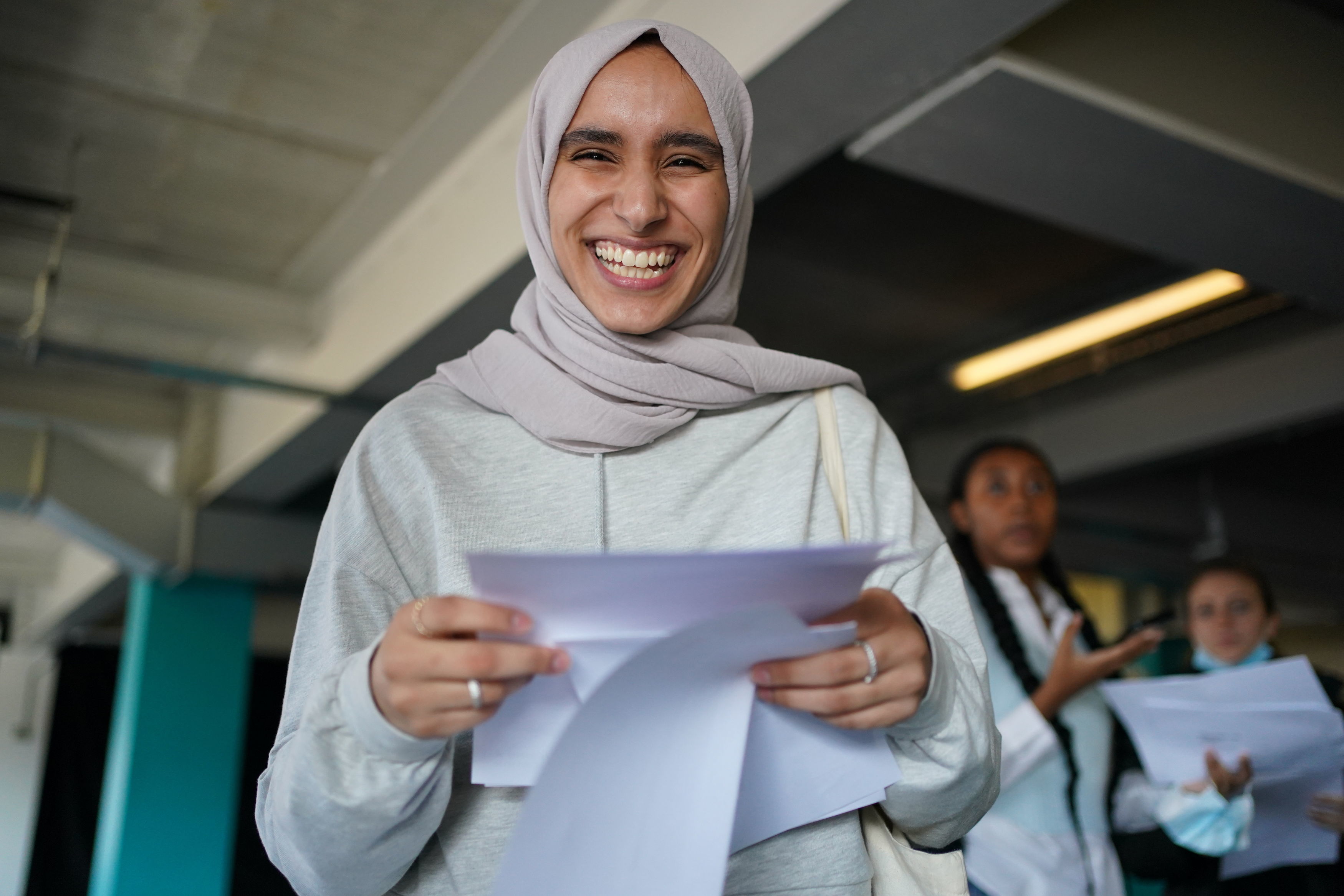 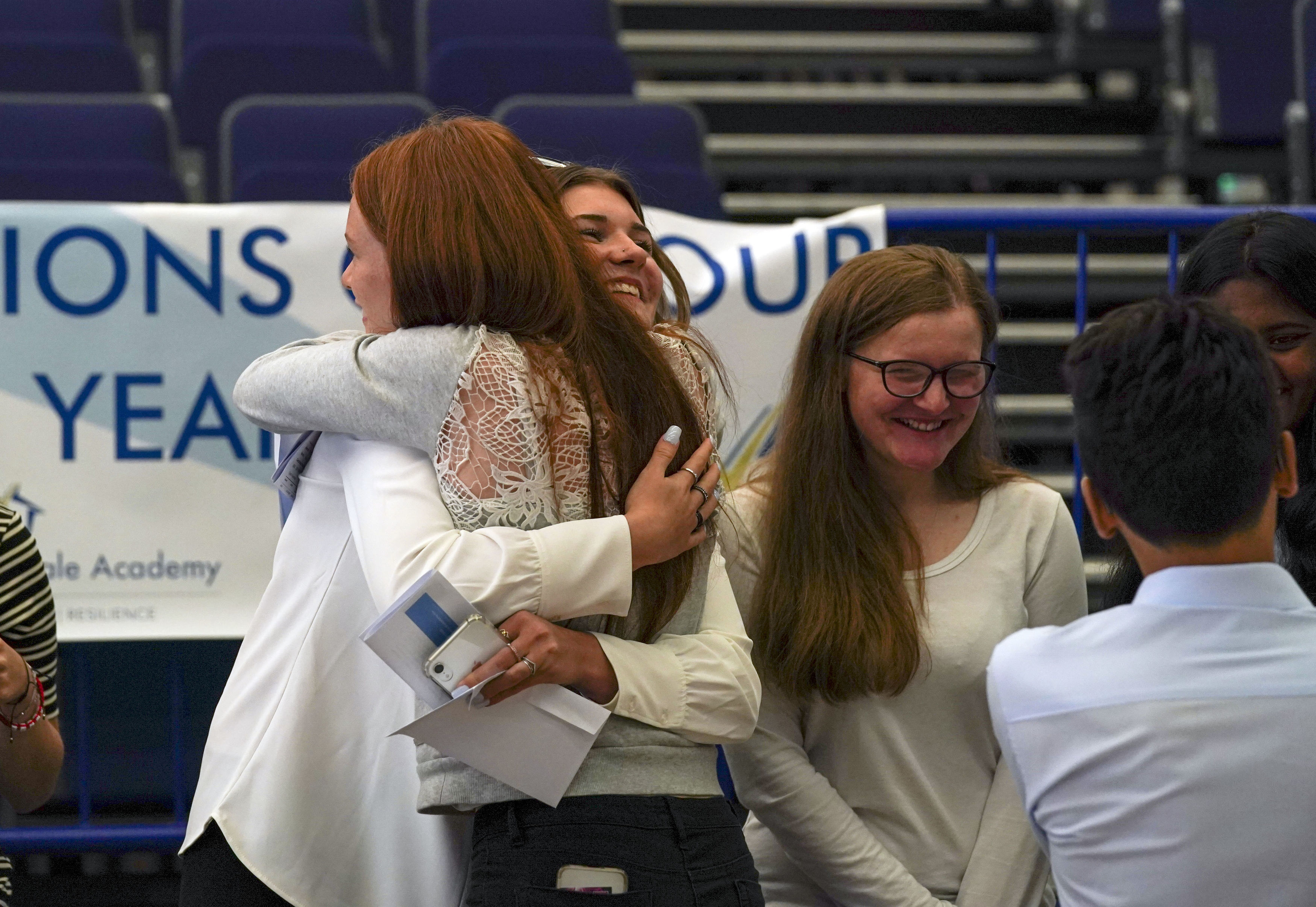 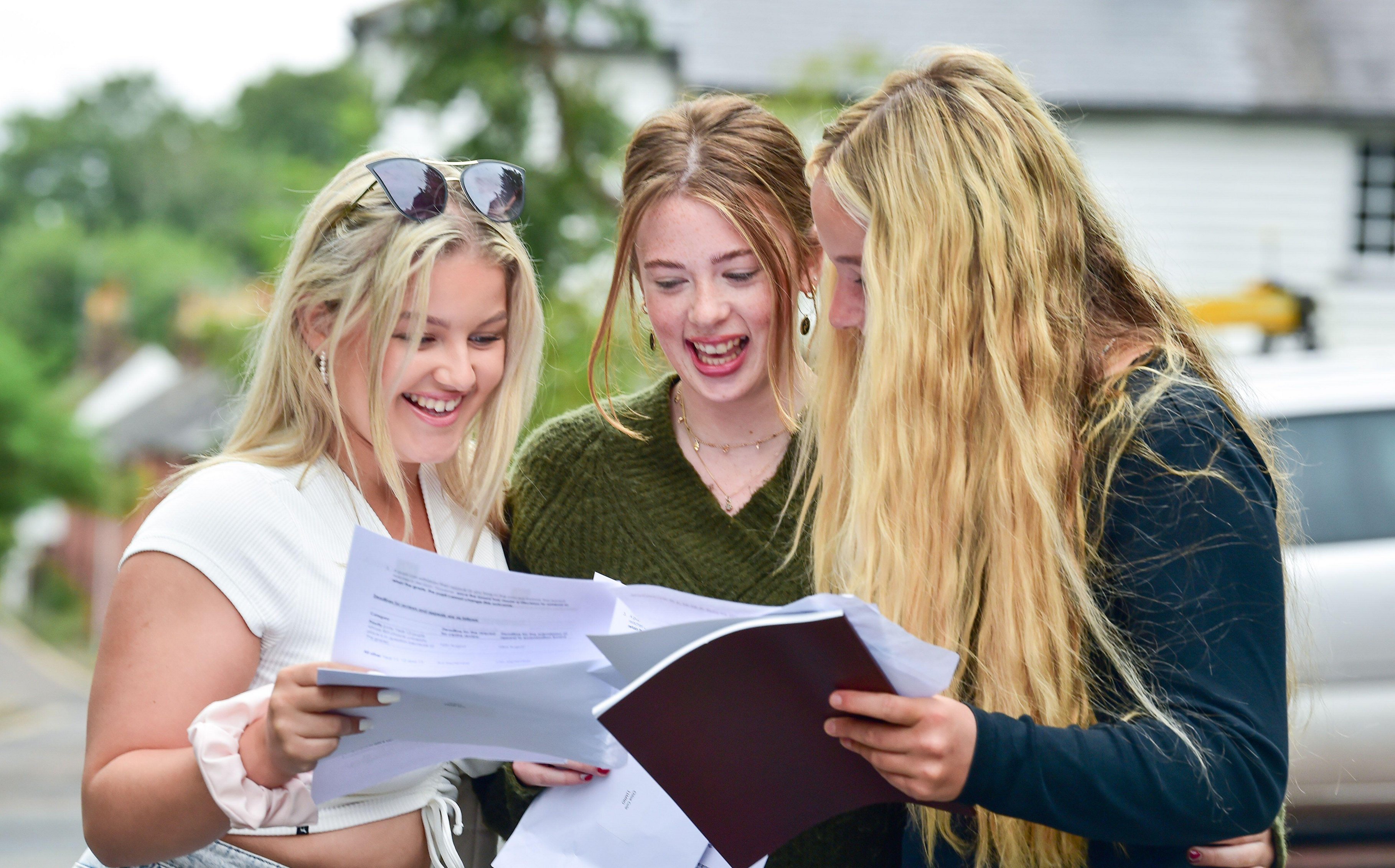 All-Time, GCSE, results, surge, to
You may also like: