Germany sees more than 50,000 Covid infections in a day for first time

Germany sees more than 50,000 Covid-19 infections in a day for the first time – hours after warning the country faced 100,000 new deaths if restrictions were not brought in

Germany’s one-day Covid case toll has topped 50,000 for the first time as politicians meet to discuss the possibility of winter lockdown measures.

The Robert Koch Institute registered 50,196 new cases on Thursday, up from 33,949 daily cases a week earlier, just hours after one of the country’s top virologists warned of 100,000 deaths over winter if no action is taken.

Meanwhile Olaf Scholz, who is expected to be the country’s next Chancellor, said he will hold a meeting of state leaders today to discuss new Covid restrictions. 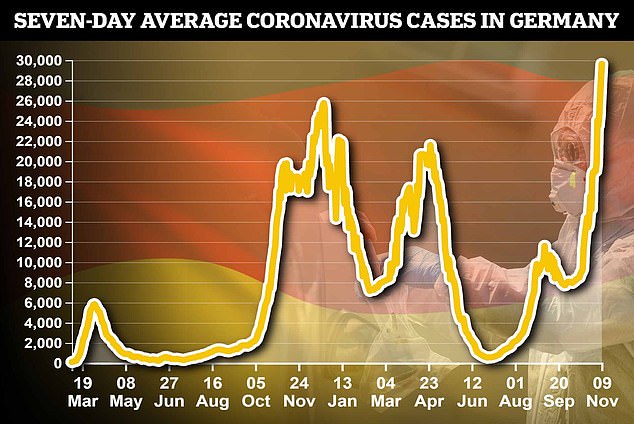 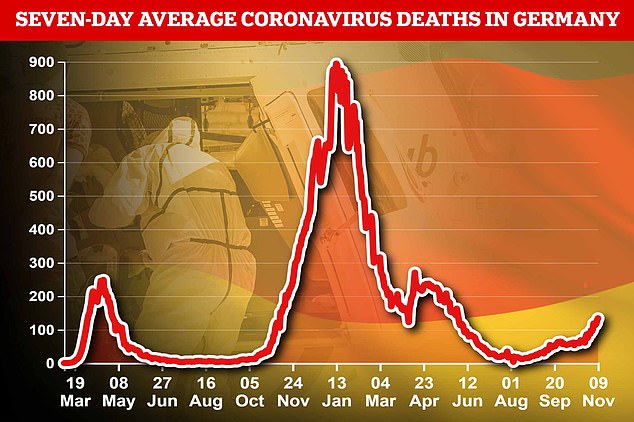 Pictured: Graphs showing the seven-day average new coronavirus cases (top) and deaths (bottom) in Germany since the start of the pandemic. The 39,676 cases registered by the Robert Koch Institute on Wednesday surpassed the previous daily record of 37,120 new cases reported Friday. The seven-day average cases is now higher than at any point in the pandemic 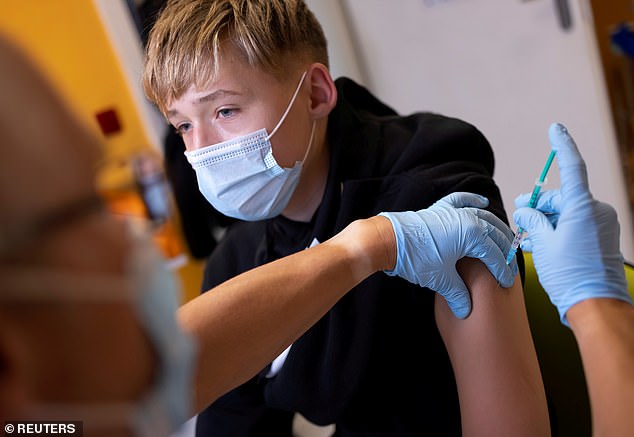 ‘What we need now is for the country to pull together in one direction,’ said Scholz.

‘It is very, very important that we take every measure to ensure that we can protect the health of the citizens of our country.’

Germany has fully vaccinated around 67 per cent of its population against Covid, about the same percentage as the UK.

However, the country is lagging far behind with its booster shots. The UK is offering boosters to everyone aged 50 and over, and has administered 11million doses so-far.

Germany, meanwhile, is only offering the shots to those aged 60 and over and has administered just 3million shots – despite having a larger overall population.

Health Minister Jens Spahn said this week that boosters will eventually be made available to everyone, but has yet to give a timetable for a roll-out.

Meanwhile Scholz has come in for criticism for his relative silence on Germany’s growing outbreak, with detractors saying he was focused on his party’s bid to form a government rather than getting a grip on the crisis.

Underlining the urgency of the situation, Drosten on Wednesday highlighted the strain already being felt by the nation’s hospitals.

‘We have a real emergency situation now,’ he said. ‘We need to do something immediately.’

Since the start of the pandemic, 96,963 people have died with Covid-19 in Germany, according to official figures.

Drosten said he expects ‘a very strenuous winter’ if vaccinations do not pick up quickly, and said the German government would need to consider measures ‘that we actually hoped to have behind us’.

‘We probably need to control infection activity again through contact measures – not probably, but certainly,’ he said.

Unlike some other European countries, Germany has baulked at making vaccinations mandatory for certain categories of workers.

Yet the country has struggled to find ways to persuade more people to get shots voluntarily.

The parties that are expected to form the next government plan to introduce legislation this week that would allow a declaration since March 2020 of an ‘epidemic situation of national scope’ to expire at the end of the month and provide a new legal framework for instituting coronavirus measures.

As during other periods of the pandemic, the country has a patchwork of regional rules.

Most places restrict access to many indoor facilities and events to people who have been vaccinated against the virus, have recovered from Covid-19 or recently received negative test results – with the latter category now excluded in some areas.

However, the rules are often laxly enforced.

Several hospitals have said in recent days that they are again working at their limits and have intensive care units so full of Covid patients that they cannot admit new patients at the moment.

The Charite hospital said Tuesday it had to cancel planned surgeries due to the number of staff members caring for people with Covid. Authorities have said most of the latest patients are unvaccinated.

Drosten admitted that sweeping national Covid restrictions could face problems in court, and that he believes people getting booster vaccinations – jabbed three times in total – is the best long-term solution. 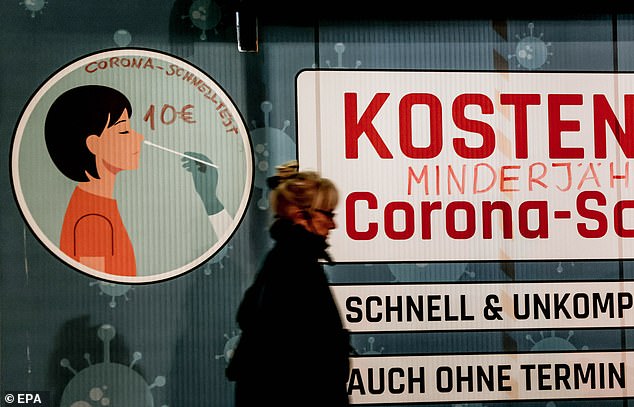 ‘You could go for booster vaccinations instead of contact restrictions,’ Drosten said. ‘That’s something I really believe in, too.’

He also raised doubts about entry rules into venues, known as 2G and 3G in Germany. 3G allows vaccinated (geimpft), recovered (genesen) and negative tested people (getestet) entry into venues such as restaurants and bars.

The more restrictive 2G option – vaccinated (geimpft) and recovered (genesen) – could close the door to the ‘back door’ testing option, he said, but as vaccinated people are still able to pass on the virus, ‘the virus will simply come into the home.’

The virologist also criticised plans by the government-in-waiting to bring back free testing as a means to avoid new lockdowns.

‘Tests are being put forward as an emergency brake to break the wave,’ he said. ‘But that won’t be enough.’ He added that the only way to ‘close the gaps’ was to reach those that have not yet been vaccinated.