DIY SOS: The Big Build returns with a Children in Need special

DIY: SOS The Big Build returns next week with a heartwarming project in support of a Hull children’s charity.

A team of volunteers came together to transform a patch of scrubland into a state-of-the art camping and outdoor activity centre for St Michael’s Youth Project, which provides activities, support and food for hundreds of children across the city.

The site, complete with a sprawling playground, woodland cycle track and timber-clad kitchen block, will give the non-profit organisation the space it needs to offer overnight camping and adventure trips to children who wouldn’t otherwise be able to afford one.

The Children In Need special, which airs on Tuesday at 9pm, is fronted by comedian Rhod Gilbert after regular presenter Nick Knowles was forced to miss filming due to a scheduling conflict with a Shreddies advert.

Knowles will return to host DIY SOS next year. 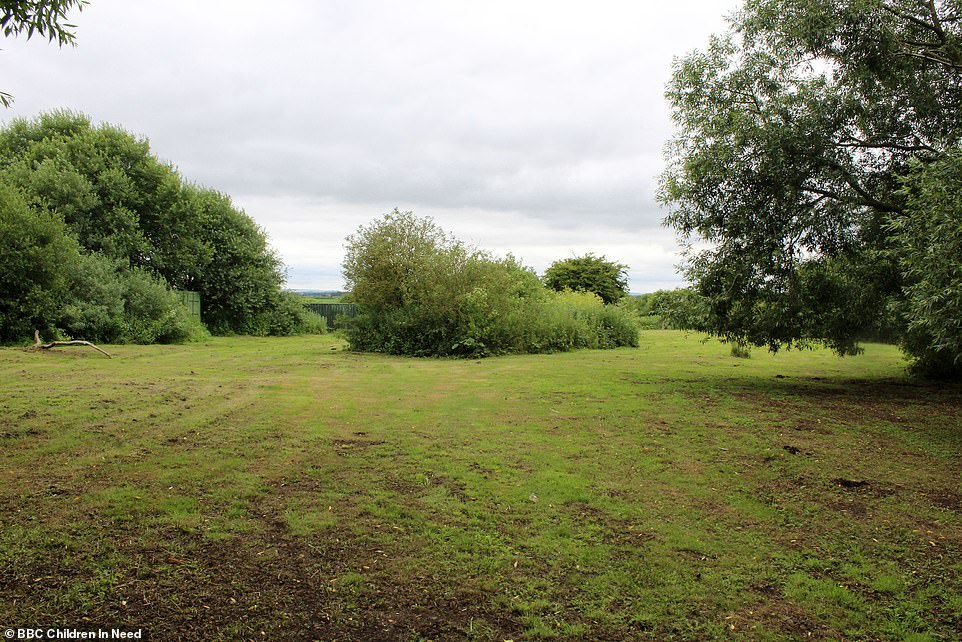 DIY SOS: The Big Build is back! Volunteers came together to transform a patch of scrubland (pictured) into a camping and outdoor activity centre for St Michael’s Youth Project, which provides activities and support to children across Hull 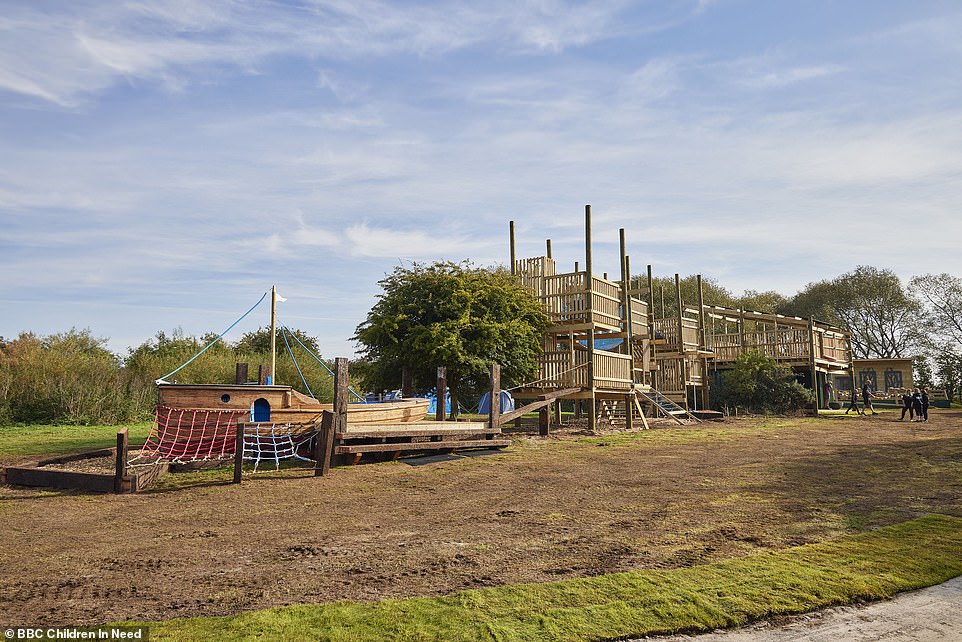 Bigger IS better! The new outdoors centre, complete with a sprawling playground, pictured, woodland cycle track and timber-clad kitchen block, will give the organisation, known as St Mike’s, the space it needs to offer overnight camping and adventure trips to children who wouldn’t otherwise be able to afford one. It was completed in just eight days 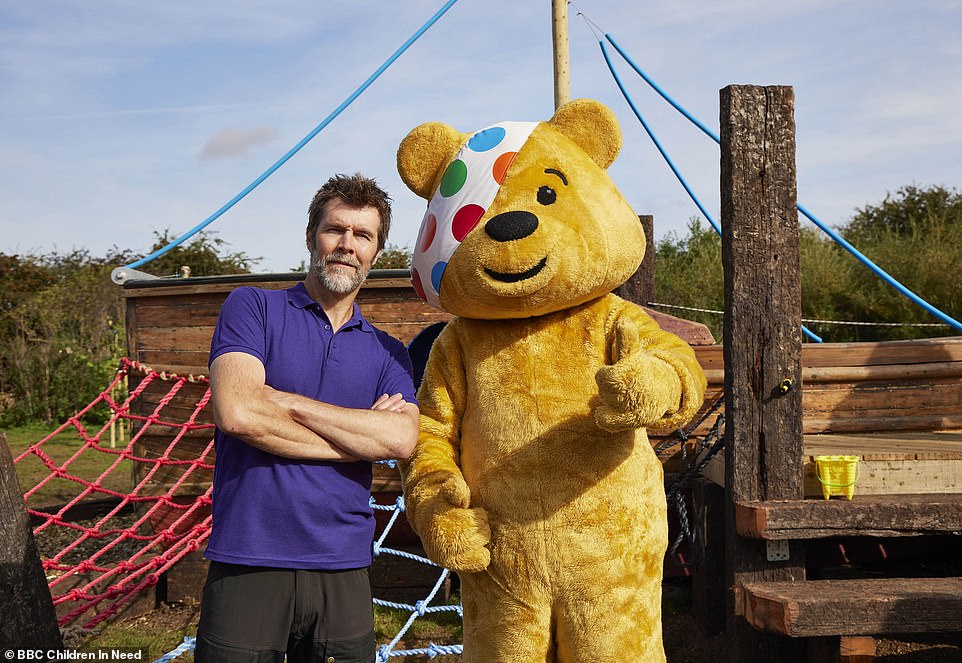 Guest presenter: Rhod Gilbert fronts the Children’s In Need special, which airs on BBC1 next Tuesday at 9pm

Founded over 27 years ago, St Michael’s, known as St Mike’s, is open 11 hours a day, five days a week to children and young people in Orcharc Park and North Hull, offering arts and crafts, dance classes, and sports clubs, as well as outdoor pursuits.

It also offers hot meals to the children, providing an essential service to those in food poverty.

‘A lot of the parents work two or three jobs just to get by, but it’s still not enough,’ charity worker Rachel explains.

‘Kids come home from school and they don’t see parents. The only people they see after school is us. It is awful to think you have to work two or three jobs just to get by, and not spend enough time with your kids. You’re in a catch-22. You just can’t win.’

To help bring in more children, youth worker Matt Rogers set up a weekly cycle clinic, encouraging children from the local community to come and learn how to repair their bikes. It is sometimes the first contact children have with the centre and can lead to a lasting relationship.

His dream is to offer holidays and adventure breaks to children, away from the inner-city headquarters.

‘The value of being outdoors is massive,’ says Matt. ‘Kids get to be themselves. They get to be away from all the peer pressure, away from the pressure of normal life and just exploring, playing with sticks, just being themselves. 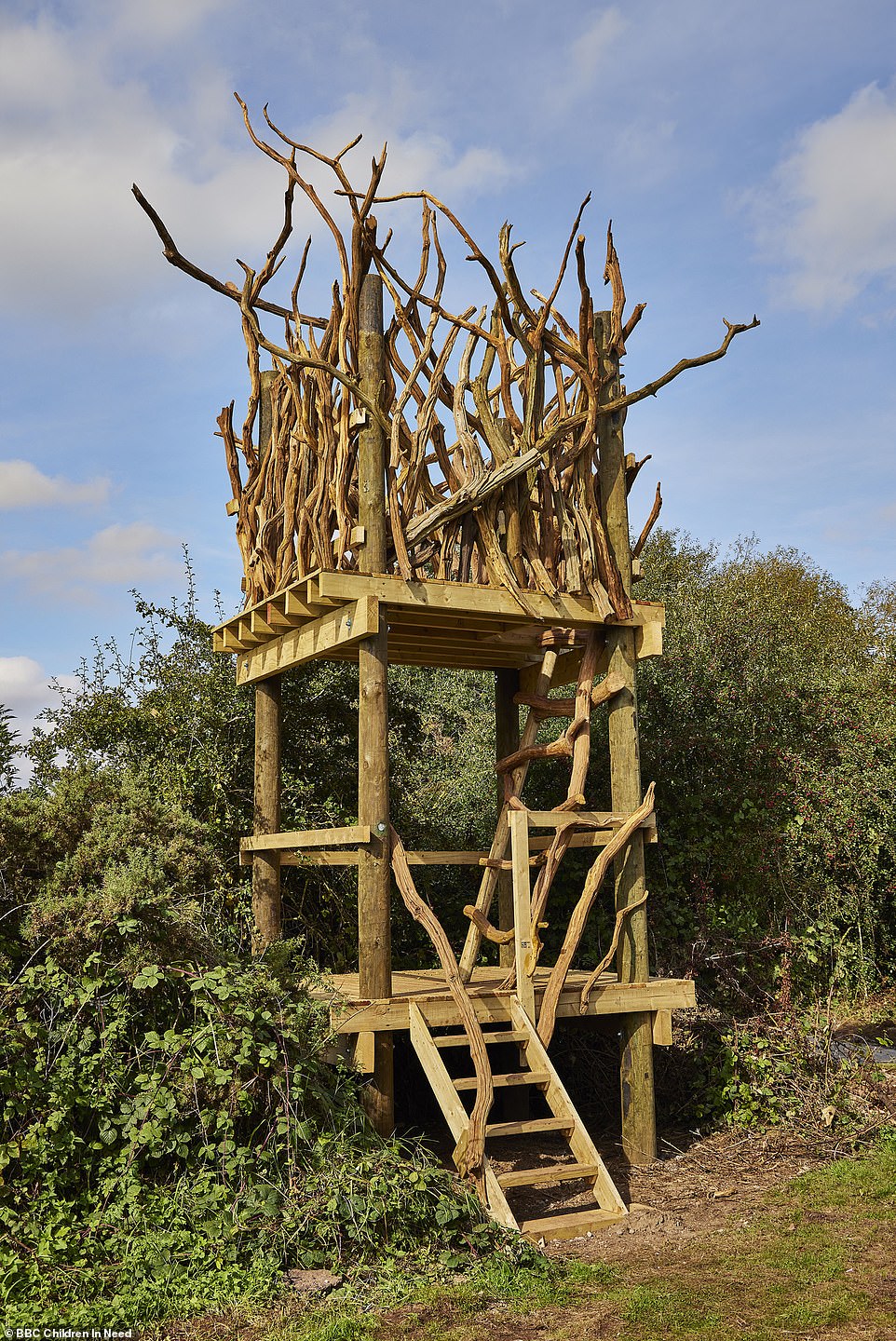 A view from the stop: This new bird watching tower was constructed from reclaimed oak and forms part of the adventure playground. It will give thousands of children the opportunity to escape the city and experience the countryside 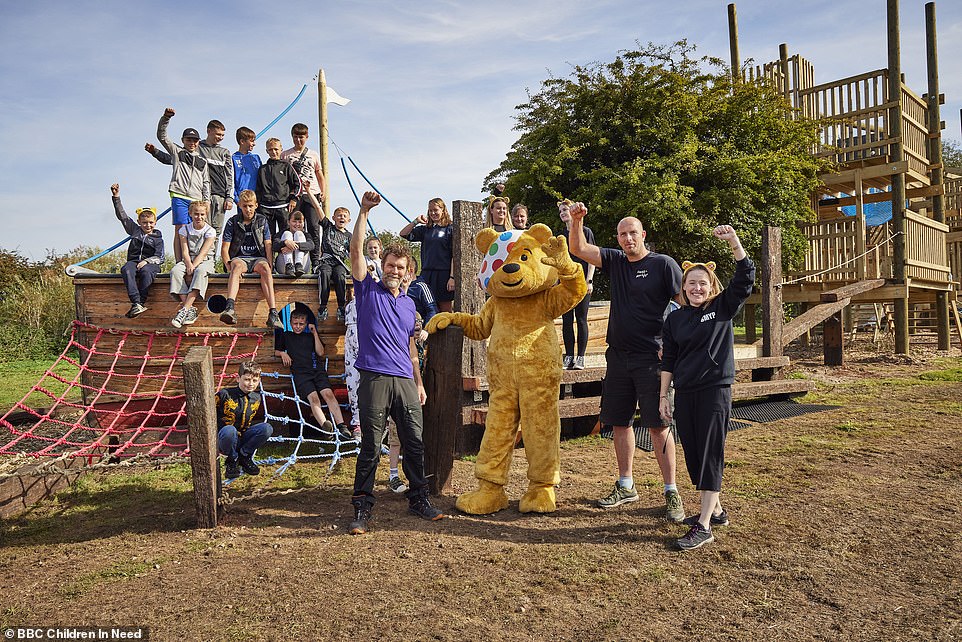 Triumphant: Rhod Gilbert celebrates with St Mike’s workers Matt Rogers and Jo Lorenz, and the children, after the build

‘We get groups of kids who wouldn’t have hung out together at home because peer pressure says they wouldn’t. They’re just mixing and matching, which is great to see.’

The group use a patch of scrubland some 20 minutes outside of Hull that was gifted to St Mike’s in 2019. Matt and a team of volunteers spent three years stripping back vegetation but the lack of sewage, electricity or shelter made longer stays impossible.

That changed with the help of DIY SOS: The Big Build. In the course of eight days the team constructed a stylish kitchen and toilet block, a woodland cycle track and adventure playground. 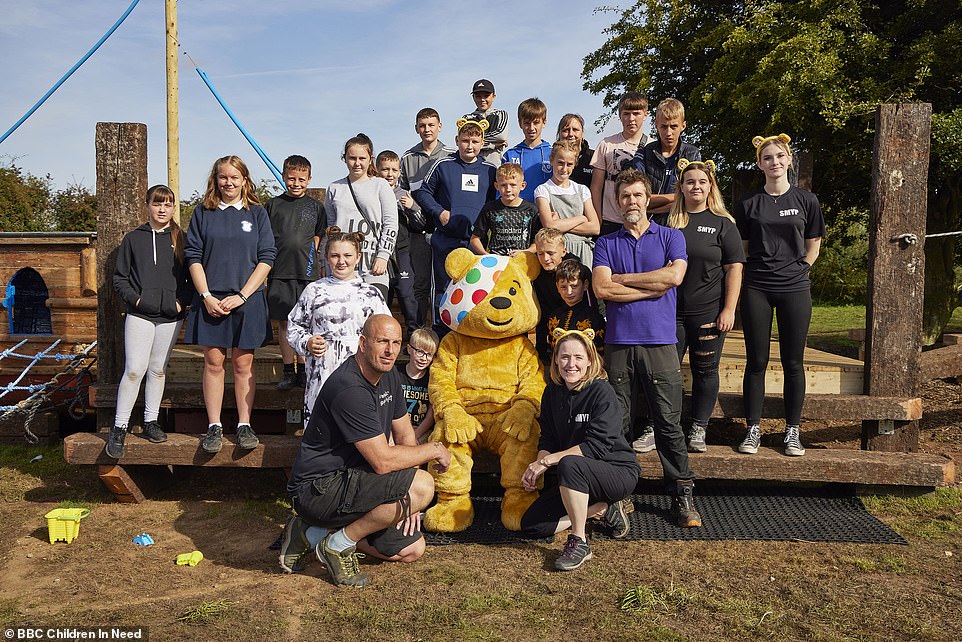 Life changing: St Mike’s workers Matt Rogers and Jo Lorenz, at the front, with some of the children who will benefit 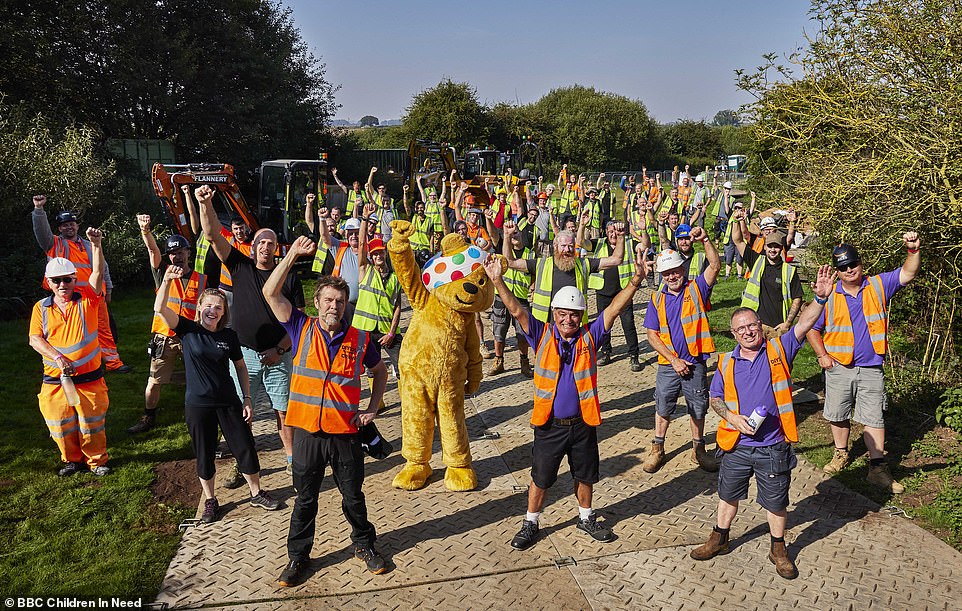 Community spirit: The fortunes of St Mike’s changed with the help of DIY SOS: The Big Build volunteers, pictured. In the course of eight days the team constructed a stylish kitchen and toilet block, a cycle track and adventure playground

The entire centre, which also includes a large storage facility and separate seating area, is powered by solar energy, making it self-reliant, too.

St Mike’s worker Jo Lorenz breaks down in tears when she is shown the centre, saying: ‘This goes beyond what we could have even dreamed of because we wouldn’t have even known where to start.’

Matt adds: ‘Water and a flushing toilet was our dream… This is just amazing.’

Presenter Rhod fights back his own tears as Matt and Jo explain just how much the new site will mean to the children of St Mike’s.

‘It’s going to make those kids feel wanted, rather than getting moved on,’ Jo says. ‘This is their place.’

big, build, DIY, returns, SOS:, the
You may also like:

PIERS MORGAN: If Phelps competed as woman, all hell would break loose