Born under Stalin, young Gorbachev survived famine and saw his grandfathers sent to the gulags – but rose through the Communist ranks to become a reforming titan of 20th Century politics

Like the final Roman Emperor Romulus Augustus and Soviet predecessor Tsar Nicholas II before him, Mikhail Gorbachev oversaw the collapse of a once-great power.

The eighth and final leader of the Soviet Union, who has died aged 91, did not fight his reformist corner till the dissolution of the communist state in 1991.

In fact, Gorbachev signed his own resignation letter just six years after taking charge and a single year after winning the nation’s only presidential election.

He took over a Soviet Union wrapped in turmoil in 1985 – and ultimately laid the path for the end of the Cold War in 1991 and current President Vladimir Putin’s rise at the turn of the millennium.

Gorbachev was promoted to General Secretary in 1985 promising revolutionary anti-Stalinist reforms and while his efforts failed to prop up an ailing Soviet Union, he ultimately helped end the Cold War with the US. 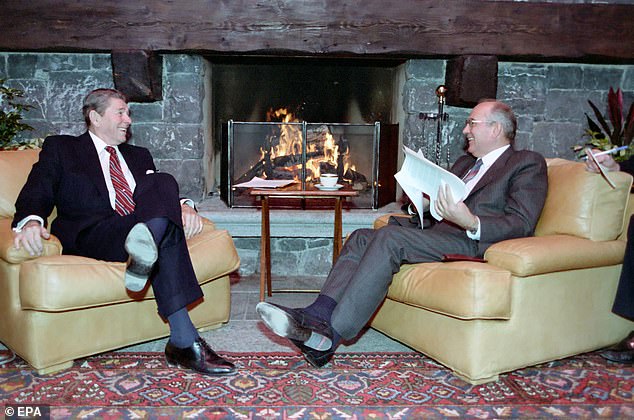 Mikhail Sergeyevich Gorbachev was born in 1931 in the remote village of Privolnoye in southwestern Russia during the rule of Josef Stalin.

Despite his grandfather enacting Stalin’s dream of collectivisation by forming the village’s first communal farm, the Soviet famine of 1932-33, in which forced crop requisition killed an estimated five million people, was an early memory for the future Soviet leader.

Two of Gorbachev’s uncles and an aunt were killed by the shortages and both his grandfathers were sent to the notorious Gulag labour camps a few years later.

This did not stop his family’s dedication to the communist cause – Gorbachev’s father Sergey received the prestigious Order of Lenin award for harvesting over 800,000kg of grain in 1948.

This allowed Gorbachev, who excelled both academically and politically throughout childhood, to be admitted to Moscow State University in 1950 to study law without taking a single exam.

It was here that he met wife Raisa, who went on to become a passionate Marxist-Leninist philosophy lecturer before assuming the First Lady post.

The pair sent daughter Irina to an ‘ordinary’ school, in her words, in Stavropol rather than one reserved for party officials.

Stalin’s eventual demise in 1953 brought Gorbachev’s newfound hero to the fore as Nikita Khrushchev, arguably the first ‘reformer’ of the Soviet leaders, took charge as the First Secretary of the Communist Party.

The initial ‘de-Stalinisation’ of the Soviet Union lasted just 11 years, with Gorbachev quietly working his way up through political office.

He rose through the ranks under Leonid Brezhnev, first heading up the Stavropol Region for seven years before being promoted to the coveted Central Committee in 1978. 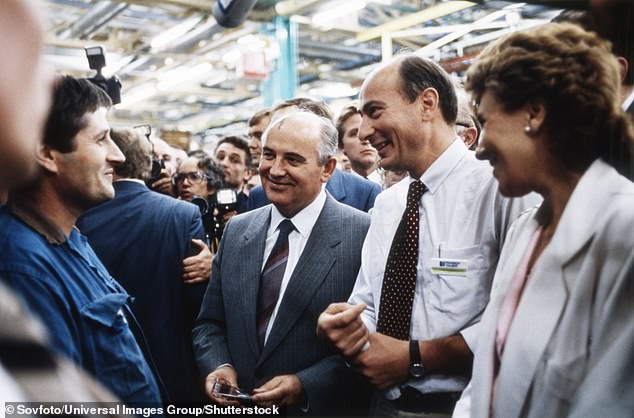 Mikhail Gorbachev meeting with workers of the Peugeot factory near Paris during his visit to France, October 1985

When he became General Secretary of the Communist Party in 1985, Gorbachev was finally able to flex his reformist muscles without fear of retribution from the party’s hardliners.

‘Glasnost’, or ‘openness’ – which was implemented in 1986 – was a key ideological shift in Soviet thought and represented a stark contrast to Stalin’s authoritarian rule.

Freedom of the press and speech was, for the first time, possible in the minds of citizens as Gorbachev implemented various anti-corruption measures and encouraged scrutiny of the Kremlin.

It won the Soviet leader no fans among the Communist Party’s hardliners, but set up Gorbachev’s landmark ‘Perestroika’, or reconstruction, plan as further liberal reforms were swept in – much to the delight on then-US President George W Bush.

He let loose on Stalin in 1987 in a furious tirade, saying: ‘To remain faithful to historical truth, we have to see both Stalin’s incontestable contribution to the struggle for socialism and the abuses committed by him and those around him, for which our people paid a heavy price and which had grave consequences for the life of our society.

‘The guilt of Stalin and his immediate entourage before the party and the people for the wholesale repressive measures and acts of lawlessness is enormous and unforgivable.’

The Soviet Union had abandoned dreams of becoming a global socialist superpower and was instead liberalising and consolidating under Gorbachev.

He took the unprecedented step of withdrawing troops from the disastrous Afghan incursion in 1988 after the Soviet Union invaded the nation nine years earlier as part of the Cold War.

Arguably, his isolationism – combined with ‘glasnost’ – inspired the Revolutions of 1989 where the people of Poland, Czechoslovakia and East Germany, stood up against Moscow.

The Brezhnev Doctrine allowed the Kremlin to intervene in any socialist state – but Gorbachev all but abandoned the policy, meaning citizens could rise up without fear of repression. 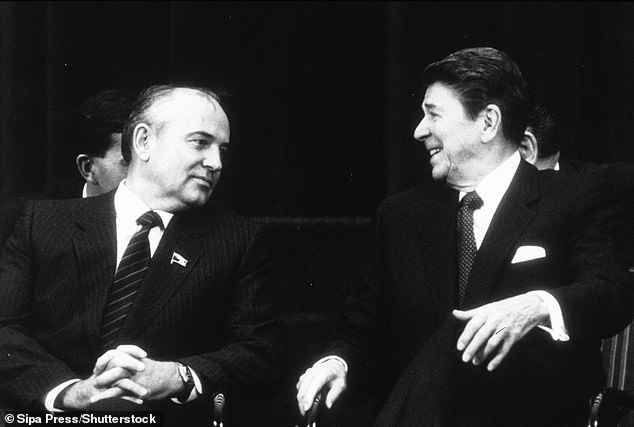 Mikhail Gorbachev, who has died aged 91, chats to US President Ronald Reagan in 1985

Still, amid fury from the traditional wing of the Communist Party, Gorbachev simply said 1988: ‘The Soviet people want full-blooded and unconditional democracy.’

In Gorbachev’s camp, this meant yielding further to NATO and restoring relations with the US.

He first met then-US President Ronald Reagan in 1985 in Geneva and laid the foundation for stronger relations between Washington and Moscow – and, ultimately, the end of the Cold War – during three ensuing summits.

Two decades after the initial landmark meeting he would deem Reagan ‘a great president, with whom the Soviet leadership was able to launch a very difficult but important dialogue.’

After comfortably winning the presidency in 1990, he proposed plans for further decentralisation and privatisation of the economy.

This meant, however, that the reformist leader ended up being caught in the middle between the old guard and the new liberal challenger Boris Yeltsin, both of who urged the leadership to choose between binary communism and capitalism.

It was Yeltsin who ended up ushering his country into a new age- something political scientist Francis Fukuyama labelled ‘The End of History’ – and Gorbachev out of office.

Months later, Yeltsin – believed to be backed by Washington – signed a decree dissolving the Soviet Union alongside 11 Republic leaders.

The last Soviet leader did not just disappear from politics, however.

A fierce critic of Putin, he said in 2016 that the current president rules through ‘friends from school, with people with whom he played football on the same street.’

The expiration of the Intermediate-Range Nuclear Forces Treaty in August 2019 – after 32 years of operation – was a reminder of Gorbachev’s rare ability to seek peace with the US – something neither his predecessors nor successors achieved.