Gorbachev’s final pain: Peace-making former Soviet president was dismayed to see Putin ‘destroy’ his life’s work in the weeks before his death

Mikhail Gorbachev revealed his dismay at seeing his life’s work ‘destroyed’ by Vladimir Putin to a close friend weeks before his death as Russia descends into authoritarianism and military aggression.

The peace-making former Soviet president who oversaw the Berlin wall being teared down died at the age of 91, Russian news agencies cited hospital officials as saying this evening.

Senior Russian journalist Alexei Venediktov, who was in touch with the veteran politician before he died, said at the end of July the Nobel Peace Prize winner is ‘upset’ that his reforms have been destroyed.

The last Soviet-era leader ended the Cold War with his ‘glasnost’ and ‘perestroika’ reforms which led to the collapse of the USSR, the reunification of Germany and liberation of the Eastern European nations and the end of the nuclear confrontation with the West.

The now president, Putin, by contrast, has re-started war in Europe with the invasion of Ukraine and curtailed the media and become increasingly agressive to other European nations while Russia has grown increasingly isolated from the West. 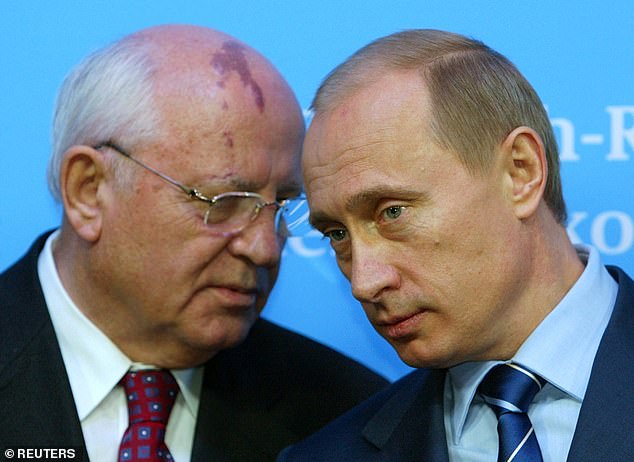 Mikhail Gorbachev (left in 2004) was dismayed before his death that he is seeing his life’s work ‘destroyed’ by Vladimir Putin (right) as Russia descends into authoritarianism and military aggression, according to a close friend 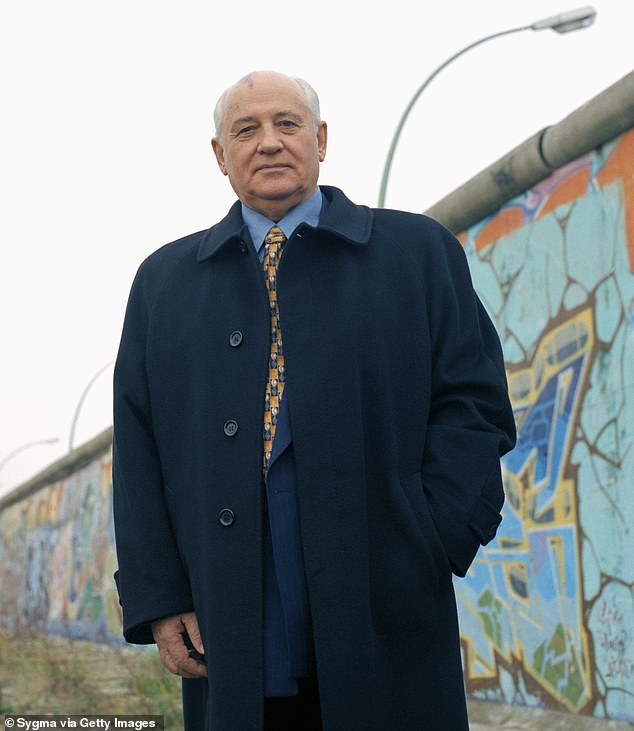 Mikhail Gorbachev, laureate of the 1990 Nobel Peace Prize by the wall 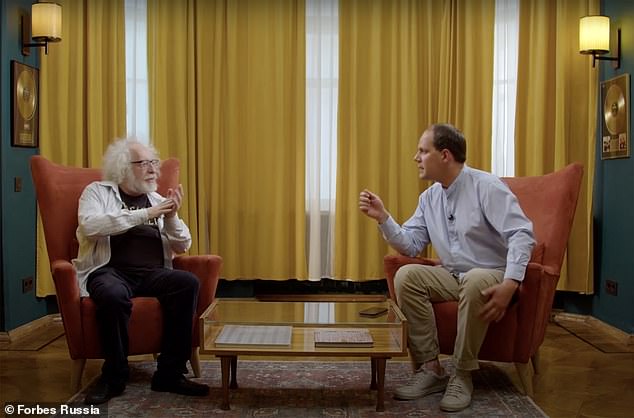 While Gorbachev did not speak candidly on the current situation before his death, Venediktov in an interview with Russian Forbes said: ‘I can tell you that he is upset. Of course, he understands that […] this was his life’s work.

‘Freedoms were brought by Gorbachev. Everyone forgot who gave freedom to the Russian Orthodox Church? Who was it? Mikhail Sergeyevich Gorbachev.

As he spoke, he gestured to show it was all destroyed.

‘So what would [Gorbachev] be able to say now?’ Venediktov said.

Gorbachev’s changes led to a flourishing of openness, setting most ex-Soviet republics on the way to forms of democracy, and a huge easing of east-west tension.

Now with Vladimir Putin’s brutal invasion of in Ukraine, NATO is rapidly restoring its on-the-ground presence in eastern Europe, and Russia is growing increasingly isolated from the West which has imposed heavy sanctions on Moscow.

‘Gorbachev’s reforms – political, not economic – were all destroyed,’ said Venediktov. ‘Nilch, zero, ashes. When Gorbachev was leaving, there were 4,000 NATO Response Forces in Europe. Four thousand.

The NATO boost comes amid fears across eastern Europe of Putin’s imperial ambitions including in the ex-Soviet countries like Estonia, Latvia and Lithuania, and Warsaw Pact nations such as Poland. 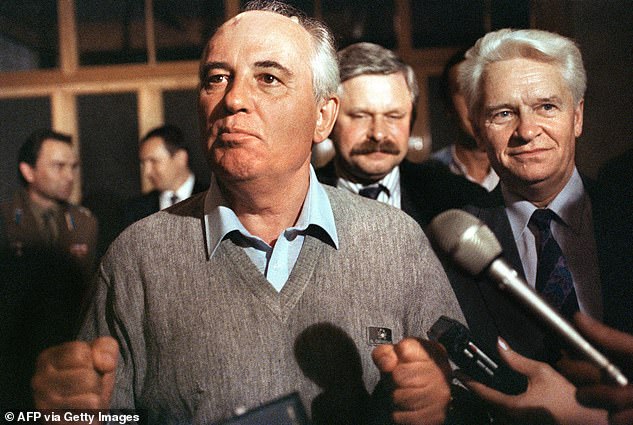 Then-Soviet President Mikhail Gorbatchev is pictured in August 1991, months before the collapse of the Soviet Union in December 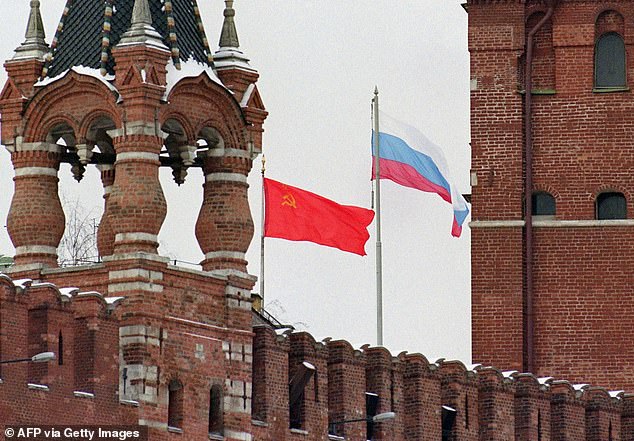 Pictured: The Soviet (left) and Russian flags fluttering over the Kremlin, between the Spassky Gate towers, in Moscow. The Soviet flag was taken down for a final time on December 25, 1991 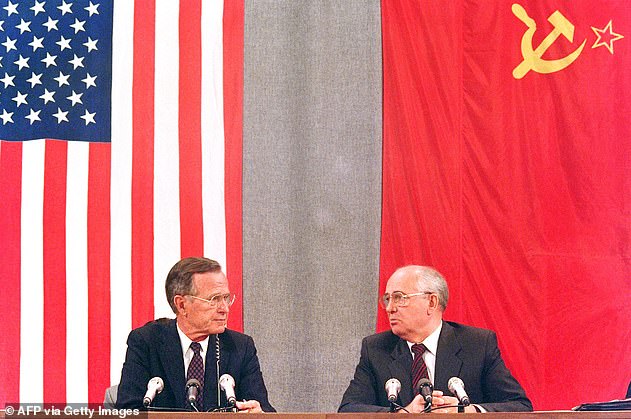 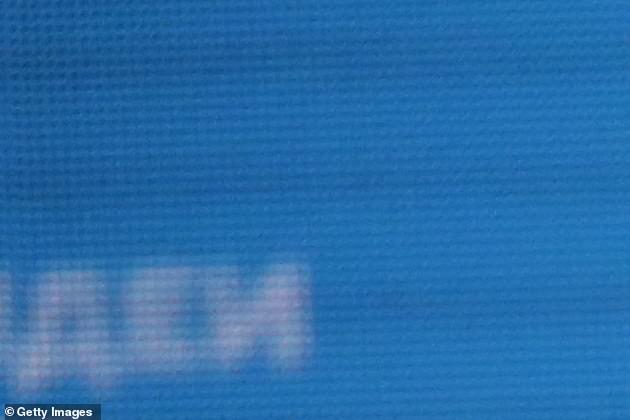 With Vladimir Putin’s brutal invasion of in Ukraine, NATO is rapidly restoring its on-the-ground presence in eastern Europe, and Russia is growing increasingly isolated from the West which has imposed heavy sanctions on Moscow. Pictured: Putin in Moscow on Wednesday

The former Soviet leader was suffering from long term kidney problems and is on dialysis and during the pandemic was confined to a clinic.

Venediktov was the longtime editor of independent Ekho Moscow radio until it was purged in March under a crackdown of media by Putin’s government.

In recent years President Vladimir Putin grew increasingly insistent that NATO is encroaching close to Russia’s borders, and uses the possibility of Ukraine joining the military alliance as one of his many ‘justifications’ for invading.

Speaking at the end of 2021 – months before Putin launched his invasion in February 2022 – Gorbachev bemoaned NATO expansionism, saying that the ‘arrogant’ United States ‘built a new empire’.

Gorbachev said Washington grew ‘arrogant and self-confident’ after the collapse of the Soviet Union, leading to the expansion of the NATO military alliance.

‘How can one count on equal relations with the United States and the West in such a position?’ Gorbachev told state news agency RIA Novosti  in December 2021, on the eve of the anniversary of his resignation as the leader of the USSR.

He noted the ‘triumphant mood in the West, especially in the United States’ after the Soviet Union ceased to exist in 1991. ‘They grew arrogant and self-confident. They declared victory in the Cold War,’ Gorbachev said.

He insisted that it was ‘together’ that Moscow and Washington pulled the world out of confrontation and the nuclear race. ‘No, the ‘winners’ decided to build a new empire. Hence the idea of NATO expansion,’ Gorbachev added.

However, he welcomed upcoming security talks between Moscow and Washington.

‘I hope there will be a result,’ he said. Two months later, Putin launched his invasion.