Zaporizhzhia, Ukraine: Some families living close to the Zaporizhzhia nuclear power plant in southeastern Ukraine packed up their belongings and started to flee Friday amid rising tensions that they fear could result in a nuclear disaster.

Fathers and husbands, unable to leave on buses with their families, helped load belongings and waved to their loved ones in tearful goodbyes at a Zaporizhzhia parking lot on Friday – as Ukrainian authorities warned of a likely Russian attack on the nuclear plant 30 miles to the southwest. 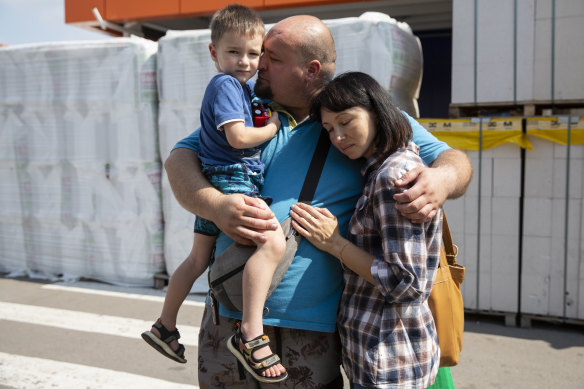 Olexander Soroka weeps as he hugs his wife and son before they leave on an evacuation bus at a humanitarian aid centre for internally displaced people in Zaporizhzhia, Ukraine. Credit:Heidi Levine/Washington Post

“It was a hard decision to make,” Serhii Aroslanov, 46, said of sending his family away as they boarded a bus to Bulgaria. They planned to travel on to Germany, he told The Washington Post. Men between 18 and 60 years old are banned from leaving Ukraine in case they are needed for military service.

“They are leaving because of the threat to the plant,” Aroslanov added.

For the most part, Zaporizhzhia on Friday looked much as it has during months of conflict, as most war-weary residents stayed put despite the threat.

For some families, however, it was the second time they have been displaced. “We’d been thinking about them leaving for a month,” Oleksander Soroka, 37, said of his wife and two children, who were boarding a bus to the Polish border. “But it was only this morning that it was finalised.” 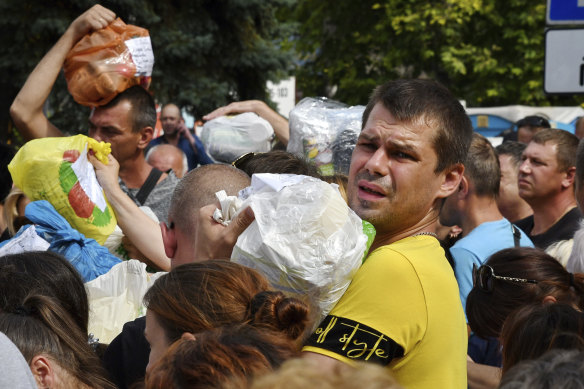 Local residents, many of whom fled the war, gather to hand out donated items such as medicines, clothes, and personal belongings to their relatives on the territories occupied by Russia, in Zaporizhzhia.Credit:AP

“It’s really hard,” Soroka added. He had been living with his family in Zaporizhzhia since March after fleeing the nearby Russian-held town of Pology.

Both Russia and Ukraine are warning of a possible imminent “false-flag” attack on the plant, prompting families and workers to flee.

The nuclear power plant, the largest in Europe, is currently under Russian control but operated by Ukrainian staff.

Ukraine’s Defence Ministry said Russia could be planning a “large-scale terrorist attack” on the plant to put the blame on Kyiv, while Russia in turn accused Ukraine and the United States of planning to trigger an accident at the plant, citing a threat of the core overheating.

Any false-flag operations at the plant would be out of the “Russian playbook – accuse others of what you have done or what you intend to do,” State Department spokesman Ned Price said Thursday when asked about the warnings. He added that such statements were a “cause for concern” and said the United States is “watching very closely”.

Russian forces have ordered workers at the plant to stay home Friday amid the heightened tensions and to limit personnel at the complex to only those who operate the plant’s power units, according to Energoatom, Ukraine’s state-run energy firm.

It added that it had “information” that Russian forces are also planning to switch off the plant’s power blocks and disconnect them from the Ukrainian grid, depriving the country of a major source of power.

United Nations Secretary General António Guterres, touring the Ukrainian port city of Odessa on Friday, called for the area around the plant to be demilitarised and cautioned against any attempt to cut power to or from the facility.

“Obviously the electricity from Zaporizhzhia is Ukrainian electricity, and it’s necessary, especially during the winter, for the Ukrainian people, and this principle must be fully respected,” he said.

Employees based in Enerhodar, the Russian-held town on the banks of the Dnieper River that is home to the plant, spoke earlier this month of the daily terror of working at the nuclear facility. Amid the deteriorating security situation, vital workers such as engineers and operational staff have fled to Ukrainian-held territory in recent weeks, they said, adding to worries about the plant’s functioning.

There are few residents of Enerhodar, a town with a prewar population of about 50,000, who don’t have some kind of connection to the nuclear plant.

The city, whose name means “Gift of Energy,” was built in 1970 by the Soviet Union for families of workers at the city’s coal-fired power station on the river. The nuclear plant, the site of which covers about half a square mile, was added 10 years later. 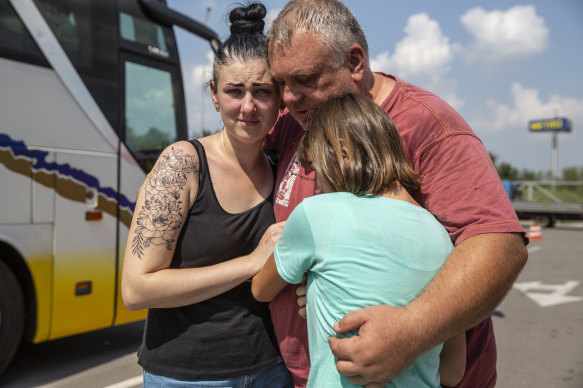 Serhil Ardolyanova, 54, embraces his daughters, Inna, 31, and Masha, 10, before they depart on an evacuation bus at a humanitarian aid center for internally displaced people in Zaporizhzhia, Ukraine.Credit:Heidi Levine for The Washington Post.

Concern is growing globally, too, for the country that suffered the Chernobyl nuclear disaster in 1986. That plant in northern Ukraine is now in Ukrainian hands after Russia’s retreat in April.

“We must tell it as it is. Any potential damage to Zaporizhzhia is suicide,” said Guterres on Thursday following a high-level meeting with President Volodymyr Zelensky and Turkish President Recep Tayyip Erdogan.

Russia’s Foreign Ministry has rejected a proposal to demilitarise the area around the Zaporizhzhia plant, saying that it would make the facility “more vulnerable.”

The presence of Russian troops near the plant is a “guarantee” there will be no reprise of the Chernobyl disaster, Russian Deputy Foreign Minister Sergei Ryabkov said on Friday.

“The recklessness with which our opponents are playing with nuclear safety poses threats to the largest nuclear site in Europe, involving potential risks for a huge territory, not only that surrounding the plant but also far beyond Ukrainian borders,” he told Russia’s Rossiya-1 television channel.

Ryabkov also warned parties of “carelessness” in the pursuit of “geopolitical goals” as he reiterated Moscow’s rejection of UN calls for a demilitarised zone around the plant.

The IAEA is seeking to send an expert mission to the area but requires consent from both Kyiv and Moscow.

Elsewhere in the embattled country, there have been unconfirmed reports of strikes at a Russian air base in occupied Crimea, annexed by Moscow in 2014.

Fighting has also intensified in the northeastern city of Kharkiv, where Russian rockets continued to cause damage and casualties early Friday, according to the regional governor. At least 17 people were killed and 42 wounded in two separate Russian attacks in recent days, Oleh Synyehubov said.