Birmingham: Britain is facing a lengthy recession and the worst decline in living standards for a generation after the Bank of England raised interest rates sharply and forecast that inflation would hit 13 per cent by Christmas.

The bank’s lifted interest rates by 0.5 percentage points to 1.75 per cent on Thursday evening, the biggest increase in 27 years, with forecasts suggesting Britain is now facing a much bleaker economic outlook than either the United States or Europe. 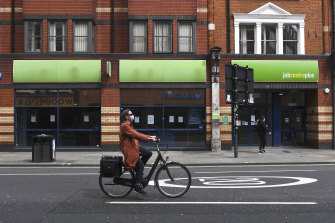 A woman rides a bicycle past a job centre in Shepherd’s Bush in London.Credit:AP

The bank forecast the country would slide into a 15-month recession later this year, with GDP shrinking by 1.5 per cent next year. Officials expect the slowdown to begin in the fourth quarter of this year, and continue until the end of 2023 – which would indicate a steady economic decline throughout next year.

Households are also more exposed to the energy price shock than in the US, and less protected by government measures than in the eurozone. At the same time, the British economy has also been damaged by the effects of leaving the European Union.

The cost of household gas and electricity is expected to rise in October by another 75 per cent, up from the Bank’s previous forecast of 40 per cent, to about £3500 ($6100) a year. By autumn energy bills, which have already risen by 54 per cent this year, will be at triple their level a year earlier.

Annual inflation is expected to rise from 9.4 per cent in June to a peak of 13.3 per cent in October, the highest level since September 1980. It will remain “very elevated” through much of next year before falling back to the 2 per cent target in two years’ time. 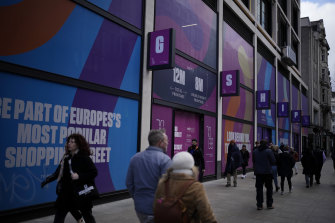 People walk past a closed down shop unit on Oxford Street, in London, where energy prices are spiralling.Credit:AP

Governor Andrew Bailey said after the decision that “the Russian shock was now the largest contributor to UK inflation”.

He said that because of the latest surge in gas prices, driven by disruption in supplies caused by Russia’s invasion of Ukraine, it now expected inflation to rise above 13 per cent at the end of the year — much higher than its May forecast.

“There is an economic cost to the war. But it will not deflect us from setting monetary policy to bring inflation back to the 2 per cent target,” he said. 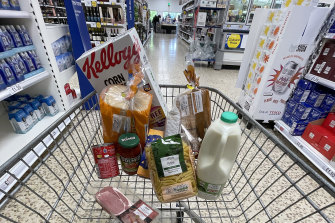 Less for more: Consumer costs rising: a small selection of essential items sits in a shopping trolley in Northwich, England.Credit:Getty

The bank has forecast that the post-tax income of households would fall in real terms in both 2022 and 2023, even after factoring in the £21 billion cost of living package announced by the British government in May.

The peak-to-trough decline of more than 5 per cent in household income would be the worst on record, with data stretching back to the 1960s.

The bank’s monetary policy has come under sharp focus in recent months, with Conservative Party leadership frontrunner Liz Truss saying the news showed the need for her “bold economic plan”.

The Bank of England will begin to sell its holding of government bonds next month as part of a move to quantitative tightening, removing stimulus from the economy.

In a decision that marks the end of its 13-year policy of quantitative easing, the bank plans to reduce its holdings by about £80 billion over the next year, with a formal vote of the monetary policy committee expected next month.