Long summer family car trips can make people tired and cranky — and sometimes that’s just the parents. But a community in western Victoria is giving holidaymakers a good excuse to stop and take a break.

Travellers are tarrying at Tarrington, a hamlet on the Hamilton Highway in Victoria’s west, to check out its quirky hay bale art. 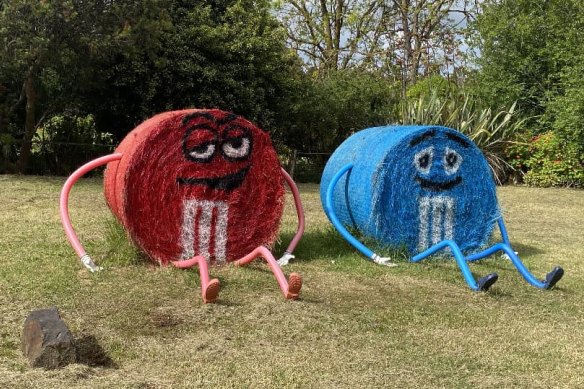 Now is the time of year when locals get hay fever and flex their creative muscles.

Tourist from as far as Geelong stop on their way to South Australia to take selfies with sights such as two giant M&Ms, a Queen Elizabeth II, and a big dairy cow.

There is a North Pole tableau with an igloo and penguins and a super-sized Tic Tac packet. 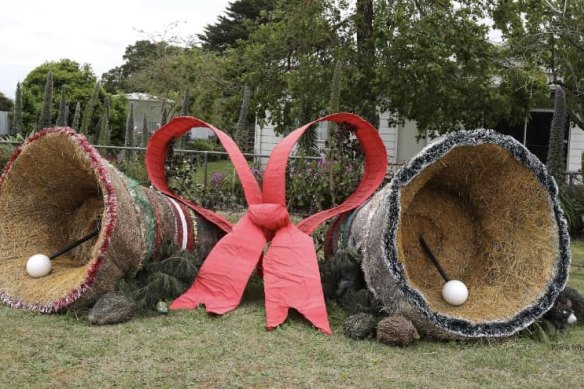 This year, he and his wife, Elizabeth, created a pair of hollowed-out Christmas bells made from bird netting and hay, trimmed with a large red bow made from a bedsheet.

In the past, they have crafted a camel, a mob of sheep and a giant kangaroo with a baby Jesus in its pouch.

Huf says local farmers have suffered damaged crops due to recent heavy rain in the region.

Tarrington’s only shop closed 18 months ago, although it has a Lutheran school and church and the local cricket team was recently revived. 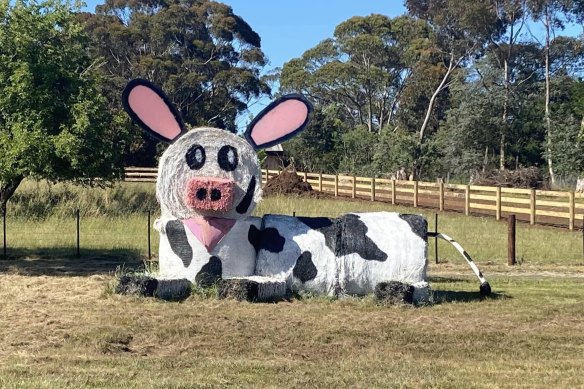 A cow made out of hay bales at Tarrington.Credit:Facebook

The hay bale art contest could “bring our local people together, many of whom don’t have much contact with each other”, Huf says. “The event is a bit of a glue to generate a bit of spirit in our village.”

Six cars are sometimes parked outside his house to see a piece. A visitor book he put out a few years ago had 3000 comments in it.

Tourist buses on day trips come from as far as Ballarat, 170 kilometres away.

Hay bale artists can get competitive. “My wife doesn’t like to do our sculpture until the weekend before judging, so that no one can copy what we’re doing,” Taylor said. 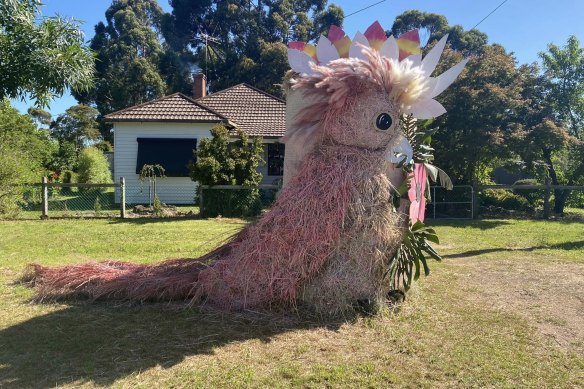 Steven Taylor and his wife, Maree, and daughter, Zoe, created a pink galah that won the Best Use of Recycled Materials section.Credit:Facebook

Taylor is proud that his 17-year-old daughter, Brooke, who lives with epilepsy, and her art teacher, Sue Catton, won first prize for depicting Artemis, the Greek goddess of hunting, holding a bow and arrow.

The contest was judged by Amelia Jones, the Hamilton Gallery’s education and engagement officer.

Taylor and his wife, Maree, and Brooke’s twin sister, Zoe, created a pink galah that won the Best Use of Recycled Materials section.

It’s made of two round hay bales, some plywood, and pampas grass and long grass for feathers.

“It started out as a wedge-tailed eagle, then it went to a Major Mitchell cockatoo, and it ended up being a galah,” Steven said.

But that’s art. “As things go along they don’t look quite right and they go in another direction. You just keep adding to it until you reckon it looks good.”

Lisa Dundas, of Geelong, stops at Tarrington with husband Greg and their children, Lachlan, 15, Matilda, 11, and Heath, 10, every year while on their 500-kilometre drive to holiday in Robe, South Australia, and enjoy the hay art.

The kids love it, she says.

“When you’ve got three kids in the car packed with camping gear no one’s particularly comfortable. It’s a long journey, the whole day, so it is nice to be able to break it up.”