A HERO dad who was stabbed after confronting a gang harassing people outside his daughter's primary school has been hailed the "Batman of Water Orton" following the ordeal.

Alan Price, 33, whose six and seven-year-old daughters attend the school in Water Orton, Warwickshire, found out two men wearing hi-vis jackets and a woman were verbally abusing parents and went to challenge them. 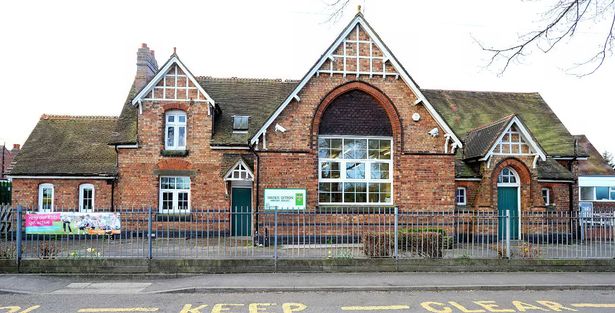 The self-employed builder politely asked them to move on as pupils were about to leave for the day on Thursday – but one of the men allegedly pulled a knife and stabbed him in the arm.

"I asked them where they were from and what they were doing and asked them if they had been giving abuse to people," Mr Price said.

“I told them to move on and there won’t be an issue. I walked away and watched them for a while and the attacker took out his bag and started rolling a spliff.

“I went over and told asked him nicely to put his stuff away and do one. He said he would when he was finished so I knocked the joint out of his hand and told him he was done.

“He stood up and went to his pocket and I asked if he was really going to pull a knife outside a school.

“He said yes and pulled the knife.

“It took him a second to open the knife and he must have expected me to back off. He went for my ribs. I lifted my arm up and he got my shoulder. It went in two and a half inches.

The alleged attacker ran off, but was intercepted by an off-duty police officer.

Mr Price swept his leg and he fell to the floor, and the off-duty officer arrested him.

"I’m just glad it was me and not someone who couldn’t defend themselves," he added.

He stood up and went to his pocket and I asked if he was really going to pull a knife outside a school. He said yes and pulled the knife.

"When I went to get my daughters today all the parents were thanking me.

"One said I was the protector of Water Orton, it's very own Batman,"

Headteacher Carl Lewis issued a statement to parents at the school about the “unusual, isolated incident”, saying the victim was “safe and well”.

The dad was attacked after “challenging antisocial behaviour”, he said.

Police said one of the suspects was arrested at the scene by an off-duty policeman. Other officers were quickly on the scene to detain the other suspects.

Mr Lewis extended his thanks to staff who reassured children "who may have witnessed the crime or were nearby", Birmingham Live reported.

"Thanks to the vigilance of members of the community, we were alerted to the individuals, which meant we were actively looking for them when the incident happened.”

A 17-year-old college student who lives opposite the scene of the incident on Plank Lane said: “Stuff like this doesn’t happen here.

"It was scary, a lot of the parents were ringing up the school panicked to find out if any kids were involved.”

Three people were arrested and one has been charged, police say.

A spokesperson for Warwickshire Police said: "Kyle Youlden, aged 20 of College Road, Moseley, Birmingham, was charged this evening with GBH with intent and possession of a bladed article.

"He has been remanded in custody and will appear at Leamington Magistrates’ Court tomorrow (Saturday, July 3).

"The charge is in connection with an incident on Plank Lane yesterday afternoon, in which a man in his 30s suffered a stab wound to his shoulder.

"Two other people who were arrested in connection with the incident have been released with no further action."