In the end, he just walked out on stage. After a decade of building his power base, wiping out his rivals and forcing changes to the constitution, Xi Jinping emerged first on Sunday to signal he would be staying in charge.

That such a monumental change to China’s political structure – the end of term presidential limits, the end of collective leadership, and the end of moderate economic and ideological influence could take place with little more than a procession of seven suits on a stage in Beijing is remarkable. 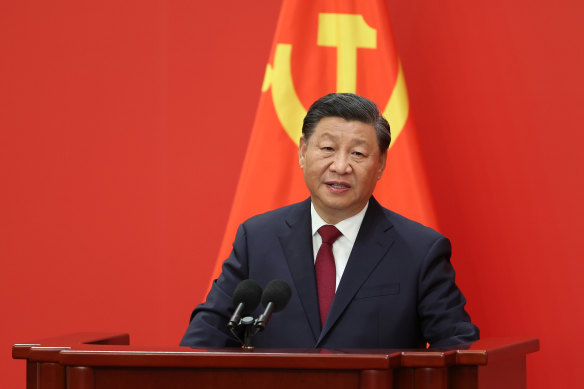 Xi and the Chinese Communist Party have been telegraphing this change for years, now it is here. The world will have to brace for the consequences.

By the time Xi Jinping finishes his third term in 2027, he will have become one of the longest-serving post-war leaders of any major economy. He won’t be finished there. At 69, Xi could serve a fourth or fifth term, imprinting his name, image and thoughts on China for generations.

On Sunday, Xi and his six lieutenants walked out, one after the other, onto the red stage at Beijing’s Great Hall of the People: Xi followed by his Shanghai protege Li Qiang; Zhao Leji, his corruption enforcer; Wang Huning, the architect of Xi Jinping Thought and his ideological lodestar; Cai Qi, who rose through the ranks after working with Xi in Fujian and Zhejiang; Xi’s chief of staff Ding Xuexiang and his family friend Li Xi. 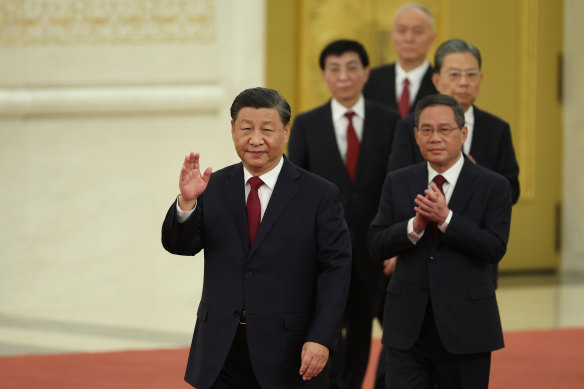 Xi is followed by the other members of the Politburo Standing Committee on Sunday. Credit:Getty

All six have ridden Xi’s wave to advance their own careers or swam quickly when it broke around them. They thrived while others drowned.

On Saturday, Xi’s predecessor Hu Jintao was unceremoniously led out of the final session of the congress. Chinese state media said it was due to ill health, but few watching his departure could have been left in doubt about the message it conveyed: there is one man in charge.

His domestic future secured, Xi is set to re-enter the international arena. It will begin with Germany’s Chancellor Olaf Scholz and French President Emmanuel Macron visiting Xi in Beijing in November – the first Western leaders to visit the capital since 2019 – and continue at the G20 in Bali and the Asia-Pacific Economic Co-operation summit in Thailand, where he is expected to meet with US President Joe Biden and cross paths with Prime Minister Anthony Albanese. For Xi, the timing of the three major diplomatic events could not be better. After being anointed as China’s undisputed leader, unchallenged in Beijing, he will mix with democratic world leaders while holding all the cards of an authoritarian ruler.

“He is the core leader,” said Dr Chen Gang, a Chinese politics and foreign policy expert at the National University of Singapore. “This is the message that he wants to send to the rest of the world.” 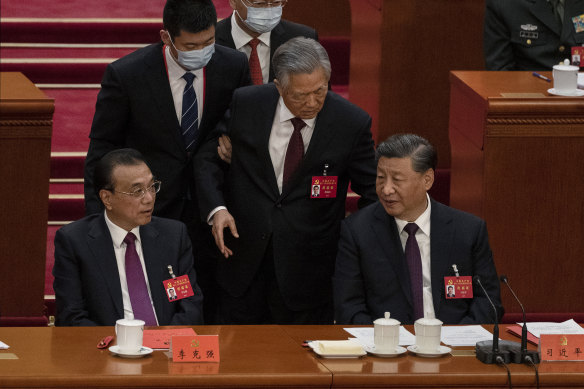 Former Chinese president Hu Jintao tries to talk to Premier Li Keqiang (left) and President Xi Jinping as he is escorted out of Congress.Credit:Getty

“China is going to be more active, and more assertive,” said Chen.

Taiwan looms as the major fault line of Xi’s next term. Xi did not escalate his threats to China’s democratic neighbour in his speech to the National Party Congress but his threats to take Taiwan “by force if necessary” have now become so commonplace that the inflammatory rhetoric has become boilerplate. Xi, as when extending his leadership into a third term, has shifted the Overton window to such an extent that what was once considered highly provocative is now accepted geopolitical reality.

In Beijing, he has spent the week preparing China for a new era of global instability. “Our country has entered a period of development in which strategic opportunities, risks, and challenges are concurrent and uncertainties and unforeseen factors are rising,” he said last Sunday.

“At the same time, the mentioning of “harmony” a term that received much attention under [former president] Hu Jintao, plummeted. The frequency of “peace” also saw a decline,” said Ruben and Ni.

“For the Party leadership, the world has become more unstable and dangerous. Therefore, it is not surprising that the choice of words in the report reflects a heightened threat perception and a more pessimistic assessment of China’s domestic and international environments.”

The close reading of the text allows for some insight into the overall narrative of China’s opaque policy development. The outlook is not optimistic.

“In short, the data suggests that over the last decade, security, technological self-reliance and ideology have become increasingly important to the Party leadership,” said Ruben and Ni.

Xi’s elimination of moderate Premier Li Keqiang and his ally Wang Yang and the elevation of his ideological chief Wang Huning as one of the senior members of the Standing Committee also means that foreign policy direction will be ever more concentrated around the president.

In Xi’s cabinet, foreign policy has been made by Xi and Wang Huning. It has been implemented by his top diplomats Yang Jiechi and Wang Yi, neither of whom were members of the Standing Committee. Yang, a tempestuous but experienced and well-regarded diplomat retired on Sunday. Xi’s new cabinet proteges Li Qiang, Cai Qi, Ding Xuexiang and Li Xi are former regional leaders who have limited to no foreign policy experience, putting Xi even more in control of China’s relations with the world.

“Since the line of party-state separation will be further blurred, the Party will thus have stronger control over state apparatus, including Foreign Ministry, after the Party Congress,” said Chen.

That leaves Australia and other governments increasingly exposed to the whims of a determined and unpredictable Xi.

“Beijing’s more pugnacious approach to dealing with the world is probably a permanent feature as long as he is China’s top leader,” the Asia Society Policy Institute said in a briefing.

“Xi’s ambition seems palpable enough that he will pursue that objective even if it entails deepening the tensions with the West beyond “strategic competition”.

The clues to Xi’s resolve are found in the policy manifesto he published this time last year.

“China must not be misguided or intimidated by foreign pushback,” he said.

“Making compromises to achieve one’s aim can only lead to more humiliating circumstances.”