Last week began with the news that Scott Morrison had been signed by a global talent agency. Its bland name – the Worldwide Speakers Group – gave no hint of the imaginative flair lurking in its publicity department. Morrison, the Guardian reported, was described as a “globalisation mastermind”. His achievements included “controlling natural disasters”. He had led his country “while others were at war”. He brought to his old job “his particular brand of calm decisiveness and rationale”.

You could quibble with this – if you were able to extract meaning from the sentences – and you could more than quibble with the assertion that Morrison was known for “aggressively working toward a net-zero global emissions economy”. But the more interesting point, I think, in a week that ended with the deposing of a prime minister in the UK, was the reminder, in these hollow phrases, of how quickly Morrison had fallen from favour. 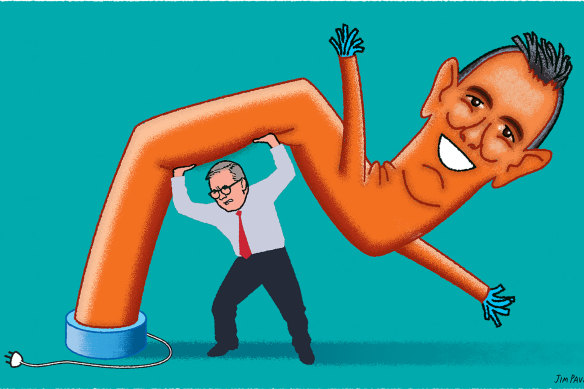 Two years in, he was still being described in some quarters as unbeatable at the next election. Eighteen months after that he was gone. Liz Truss lasted just 45 days. In both cases, the national mood, as well as the overall attitude of the media, shifted sharply and irreversibly against them.

In another respect, Truss and Morrison were at opposite ends of the spectrum. Truss, with her dramatic actions on the budget, wasted no time in starting a national conversation about her plans for the country – to the extent that her ideological allies are now saying that she has killed off the chances of pursuing similar plans for years to come. Morrison was in part brought down by his determination, over the almost four years he was in power, not to start any national conversations at all.

At first glance, Labor’s task – which arguably begins with Tuesday’s budget – seems easy enough: avoid the extremes of either the Morrison model or the Truss model. Start a conversation, conduct it gradually, get some things done. Which is, unsurprisingly, close to what Treasurer Jim Chalmers says he is doing.

Anthony Albanese and his treasurer are quite different politicians and so the similarity of their approach here is interesting. In opposition, Albanese publicly laid out the chronology of his political strategy and then stuck to it. Similarly, on economic reform, Chalmers has made his timing clear: he says this will be the first of four budgets (or perhaps three, depending on election timing). The “national conversation” on what we can afford begins here, he says, rather than ends. There are a couple of important reports on the way that will shape the discussion, though probably not a new tax review. Just after the election he told journalist Phil Coorey the national conversation would begin in earnest in the second half of 2023. 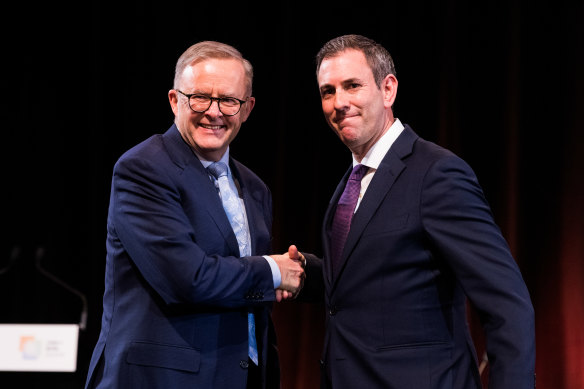 Tuesday’s budget will be a key moment for both Prime Minister Anthony Albanese and Treasurer Jim Chalmers.Credit:James Brickwood

There are two political aspects to this. One is the idea of bringing voters with you. The second is the strong view at the top of the government that this approach is already delivering political benefits: that voters, seemingly pleased so far, are mostly responding to an impression of good government, which in part means change pursued in an orderly fashion, with no surprises. (This is why the government is not willing to break its promise yet on the stage 3 tax cuts.)

But here we come to the great difficulty facing the Albanese government. When the public aren’t listening that closely, how do you start a proper national conversation without the element of surprise? What if the perception of “good government” depends on going quietly about your business with no surprises, but actual good government – getting things done – ultimately requires the opposite?

One of the most famous moments in Australian political history occurred when the prime minister at the time, Bob Hawke, was on a plane to Tokyo. As then reporter Greg Hywood put it later: “Standing alone in the kitchen of Mr Neil O’Keefe’s electorate office in Kyneton just out of Melbourne the Treasurer [Paul Keating] spoke the two devastating words down the telephone in the midst of a radio interview with Sydney radio’s John Laws.”

Those two words – “banana republic” – shocked the public, and created a political crisis. According to Paul Kelly’s account – The End of Certainty – Keating later said it was a mistake. But it was, in Kelly’s words, the “interview of the decade”; many of the changes that Keating and Hawke were later lionised for came from that shock, accidentally administered.

Consider the size and difficulty of the case this government must make. It must, at some point, argue for tax increases. To do so, it must argue that we don’t have enough money. To do so, it must argue that costs are going up – on disability services, on aged care. But none of these arguments are remotely new. Will another Intergenerational Report make the difference? It might also make the argument that we are, together, choosing a better type of society, in which we share the costs of things like childcare.

Perhaps that is a good argument; but it also adds to the layers of complexity of the case. So, are we relying simply on the fact that this government will run a sustained case; that by repeating the arguments over several years voters will finally hear them?

It’s possible this will work. But it is likely more will be needed. A global economic crisis would complicate matters, but would make the government’s case simpler because the need for changes would look imposed, rather than chosen. But remember that Hawke and Keating faced international economic challenges too, and still needed to shock people to make their case – and that was in a far quieter media environment.

Chalmers is unlikely to surprise us this week – probably the right choice, with the end of the year so close. This week’s budget is perhaps best viewed as an exercise in building credibility. In the longer run, the government must remember that credibility is a means, not an end. A “national conversation” sounds subtle and nuanced – but is often begun by a single announcement or a few blunt words, uttered by a politician ready to put their credibility on the line.