Job losses and home schooling pressure helped drive a quadrupling of calls for abortion counselling early in the pandemic, including three times more calls from women over 18 weeks pregnant.

Between March and July 2020, calls from women at or above 18 weeks’ gestation to the Victorian government-funded 1800MyOptions line increased 350 per cent, from 2.5 per cent of traffic to 8.8 per cent of calls, Monash University research revealed. 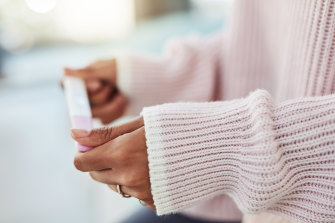 Demand for the early-pregnancy termination medication MS-2 Step was twice as high in regional areas as large cities, but many women live in areas where it is not prescribed. Credit:iStock

The finding came as an NHMRC research study showed women living in regional Australia were twice as likely as women in big cities to use the early pregnancy abortion pill MS-2 Step-2 Step, but one-third of women in the regions, and half in remote areas, have no access to it.

Professor Danielle Mazza, chair of general practice at Monash University and a member of both studies, said the jump in calls for abortion information showed the extreme pressure some women were under early in the pandemic.

“There’s been a lot of talk about the effects of the pandemic on the population in general; financial insecurity, mental health and some discussion about family violence. This research takes it an extra step to demonstrate the real impact on women who are having to grapple with additional burdens around their reproductive health,” she said.

She said some reasons women might seek abortion advice at a later stage of their pregnancy included “loss of employment, increased responsibilities associated with home schooling and feeling nervous about seeking healthcare”.

There was a two-and-a-half times increase in callers citing financial insecurity as a reason for the call, often as a direct result of income loss during COVID-19, and reports of family violence almost doubled.

Carolyn Moghrabel, manager of Womens Health Victoria’s 1800MyOptions counselling line, said many women who sought advice, particularly those who called at later gestations, were so stressed by the pandemic they had neglected their health.

“Women who may previously have noticed some body changes were so distracted by the stress of the pandemic, as well as homes chooling and the transition to working from home and managing the situation, they weren’t paying attention to their own health,” she said.

Research by the NHMRC centre for research excellence in sexual and reproductive health found prescription of MS-2 Step medical termination pills more than doubled between 2015 and 2019, to 3.7 scripts per 1000 women aged 15–54 nationally.

Rates of use in outer-regional areas among women aged 15-54 were nearly double those in major cities (at 6.53 compared with 3.30 per 1000), but in one third of regions no GPs prescribed them and no pharmacists dispensed them in 2019.

The research, published this week in the Medical Journal of Australia, noted “many doctors conscientiously object to performing abortions, and some refuse to refer patients for such procedures, despite a legal obligation to do so”.

Womens Health Victoria CEO Dianne Hill said the public health system had a responsibility to ensure the basic health service of fertility control was available to all Australian women.

“During 2021 we have achieved decriminalisation of abortion across Australia. We would all think finally women should be able to access abortion services. [But], and we know that’s not the case – there are big gaps,” she said.

Professor Mazza said supporting GPs in the delivery of early medical abortion services locally should be a focus of health policy.

home, Job, loss, pand, schooling
You may also like: