As Netflix endures another week of the maelstrom created by Dave Chappelle’s controversial comedy special that shows no signs of slowing down, the streamer finds itself on the edge of a metamorphic moment.

Since its transformation from DVD mailer to entertainment industry heavyweight nearly a decade ago, the company has managed to weather the tide of controversy that comes with being a big fish in the rising ocean of online streaming. But this? This feels different. 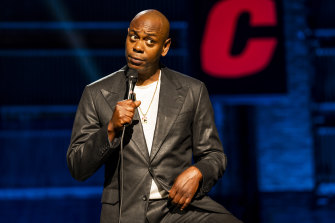 Since the special debuted October 5, three employees were suspended, fiercely guarded corporate data was leaked, another employee was fired, countless others are planning to walk out in protest, and demands have been made. And that isn’t all. Public criticism is mounting, and the company’s own stars aren’t holding their tongues (or Twitter fingers).

But the question of whether the streamer will leap or fall back is still up in the air.

With a marathon list of original programming that in 2019 was equivalent to debuting one new show a day, stumbles are inevitable. That same year, Netflix blocked Saudi audiences from viewing an episode of Hasan Minhaj’s show Patriot Act after the comedian connected the murder of Washington Post columnist Jamal Khashoggi to the Saudi Arabian crown prince in his monologue. The kingdom was not pleased and claimed the episode violated the country’s law. In a statement, Netflix emphasised that it strongly supported artistic freedom but was forced to “comply with local law.” 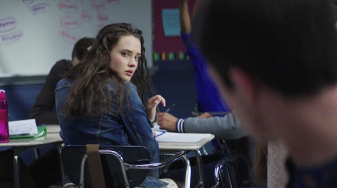 In the Minhaj matter, the response was swift – and criticised as censorship. But in the case of the streamer’s wildly popular teen drama 13 Reasons Why, it took the company more than two years to edit an intensely graphic scene depicting suicide. Mental health advocacy groups had been flagging the scene since the show’s debut season.

The mea culpas have continued. In 2020, Netflix apologised for an inappropriate image of the child actresses starring in the film Cuties, a French coming-of-age tale about an 11-year-old Senegalese girl who escapes her conservative home life by joining a dance crew with her other prepubescent pals. The promotional poster featured the girls in skimpy clothing and suggestive poses – the very sexualisation the film critically explores but does not exploit. After intense backlash, Netflix changed the artwork and tweeted an apology that read in part, “It was not OK.”

The company clearly knows how to take a beat and change course when necessary. But when it comes to the Chapelle controversy, Netflix seems to not only have a blind spot, but to have hit a nerve.

From its very first punchlines, The Closer, Chappelle’s sixth and perhaps final special for Netflix, establishes itself as napalm. The 48-year-old jokingly refers to himself as “transphobic comedian Dave Chappelle” in an attempt to reanimate the dead-horse topic of cancel culture and political correctness already chewed over in his 2019 special Sticks and Stones.

The outrage from LGBTQ advocacy groups and watchdogs was almost immediate and unsurprising. The special, they said, was transphobic and presented a real threat. Equally predictable was Netflix chief executive Ted Sarandos’ quick defence of it, supporting Chappelle’s “creative freedom” in an internal memo. (In an interview with Variety published Tuesday night, Sarandos said he “screwed up that internal communication.“) But instead of the typical Netflix fallout equation – which usually involves a public misstep plus a few days of social media outrage equaling a corporate apology – the Chappelle problem hasn’t been so easily solved.

So what’s the difference here as opposed to the streamers’ other controversies? Instead of just outside pressure mounting the charge, the internal temperature at Netflix seems to have reached a fever pitch with calls for action coming from both employees and the boldfacers who made their names on the platform.

Terra Field, a Netflix software engineer who is also transgender, took the company to task on Twitter for attempting to be “neutral” (“This is not an argument with two sides. It is an argument with trans people who want to be alive and people who don’t want us to be,” she wrote), and then attended a meeting meant for senior executives along with two other co-workers. All three were suspended and then reinstated days later. But the fate of another colleague was more permanent: Netflix confirmed that it fired an employee for leaking company data, including that the streamer paid $US24.1 million ($32 million) for The Closer, that appeared in a Bloomberg News article.

While this corporate drama was playing out, the talent was equally enraged.

Jaclyn Moore, the showrunner of the Netflix series Dear White People who is also trans, said she was “done” with the company.

Australian comedian Hannah Gadsby, whose 2018 Netflix special Nanette was heralded as groundbreaking for her takes on trauma, sexuality and mental health, took particular exception with Sarandos, who in a memo cited Gadsby’s work as an example of the streamer’s diverse slate of programming.

“Hey Ted Sarandos! Just a quick note to let you know that I would prefer if you didn’t drag my name into your mess,” Gadsby responded via Instagram. “Now I have to deal with even more of the hate and anger that Dave Chappelle’s fans like to unleash on me every time Dave gets 20 million dollars to process his emotionally stunted partial world view.”

“You didn’t pay me nearly enough to deal with the real world consequences of the hate speech dog whistling you refuse to acknowledge, Ted,” continued Gadsby, who used some choice words to blast Sarandos for his “amoral algorithm cult.”

Gadsby might have been one of the biggest Netflix names to confront the company head on, but more of the streamer’s stars, including trans creators and actors, made their opinions known, if not directly.

Matrix filmmaker Lilly Wachowski, creator of the Netflix series Sense8, tweeted her support of Netflix employee Terra Field and retweeted a link to an article explaining the link between art and real-life harm, a point Sarandos initially tried to diminish in his memos to staff. Sense8 actress Jamie Clayton tweeted the hashtag “TransLivesAreNotAJoke.” Elliot Page, who stars on The Umbrella Academy, has tweeted repeatedly in opposition to the Texas bill that would block transgender students from playing on school sports teams that align with their gender identity.

Other big names are lending their star power to the cause by directly supporting the employees who plan to walk out on Thursday. Netflix talent Jonathan Van Ness of Queer Eye will appear alongside Angelica Ross, Jameela Jamil, Eureka O’Hara, Colton Haynes, Sara Ramirez, Ts Madison, Our Lady J, Alexandra Billings and Joey Soloway in a PSA that will be screened at the in-person Stand Up in Solidarity rally in Hollywood organised by activist Ashlee Marie Preston, according to Variety.

The Trans Employee Resource group at Netflix, which consists of trans and non-binary employees and their allies, released a list of demands ahead of the scheduled walkout.

“We want the company to adopt measures in the areas of content investment, employee relations and safety, and harm reduction, all of which are necessary to avoid future instances of platforming transphobia and hate speech,” employees wrote in a news release obtained by the Verge. Among other demands the list included adding disclaimers to transphobic content, investing in trans creators and recruiting trans people to work in Netflix leadership roles. The group did not demand that The Closer be removed from the platform.

In a personal essay titled It Was Never About Dave, Field laid out the work Netflix employees have been doing behind the scenes since the release of Chappelle’s other controversial special Sticks and Stones. Memos were sent. Meeting were held. But two years later The Closer landed with the same jokes and the same defence from Netflix brass.

“Dave is not, and has never been, the cause of this problem – he is a symptom of it. That Dave believes the things he says and can say them with relative impunity is a result of the culture we live in: a culture that marginalises and devalues trans people. He contributes to that culture in a very real way, but at least he isn’t out there bragging about how many LGBTQ+ allyship awards he has won while he is doing it.”

In the final moments of The Closer, Chappelle seems to try to qualify his remarks, telling the audience that he has “never had a problem with transgender people. If you listen to what I’m saying clearly, my problem has always been with white people.” Field’s essay almost mirrors that thinking: her problem isn’t with Chappelle. If you read her tweets, she says, you’ll see that her problem has always been with Netflix.

controversy, Dave, How, over, the
You may also like: