A HORROR video that shows the moment a cop was killed by a crazed driver with an AR-15-style rifle has been released by police.

New Mexico officer Darian Jarrott pulled over Omar Felix Cueva, who cops say was on his way to a drug deal, in a traffic stop that cost him his life. 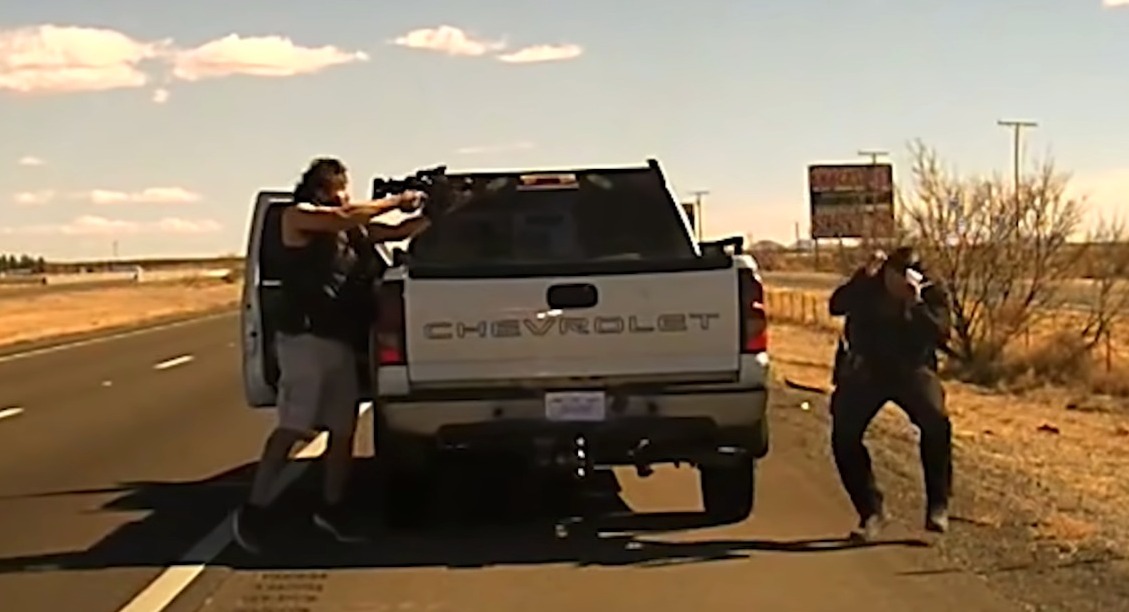 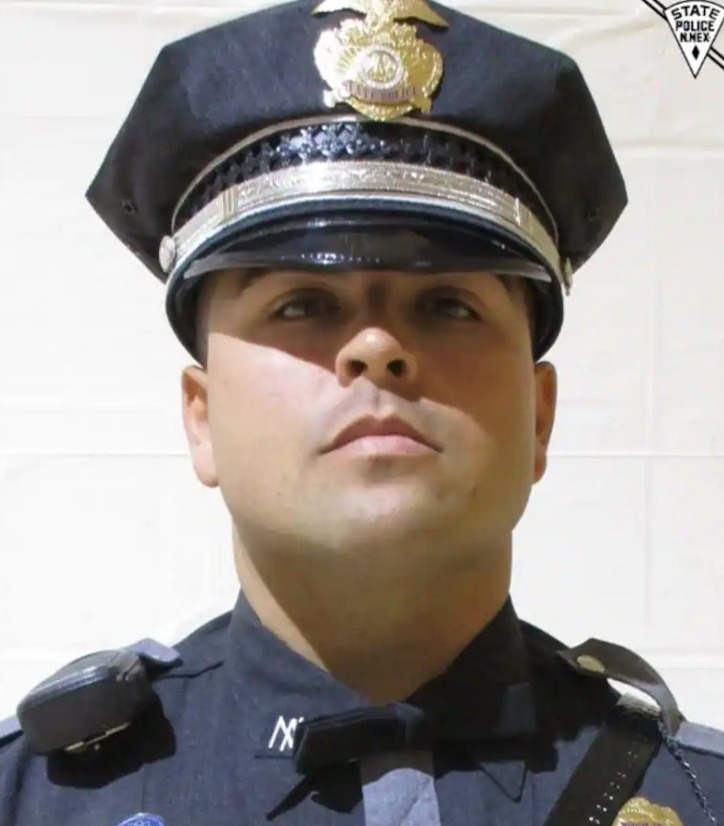 State Police released the footage as they revealed more details about the horror killing on Interstate 10 near  near mile marker 102 east of Deming, New Mexico, on February 4.

Officer Jarrott, 28, a dad-of-three young children who was expecting a fourth, asked Cueva, 39, to exit the vehicle.

And then when the driver stepped out, he drew what cops described as an "AR-15-style rifle" and opened fire.

The cop ducked and fell onto his back, only for Cueva to run around the side of the vehicle and fire several more rounds at him.

Cueva then ran towards the front of the truck, and brutally killed Officer Jarrott with a point-blank shot to the back of his head.

Police released a five minute video of the incident which includes footage from Officer Jarrott's bodycam and the dashcam of his patrol car.

It features him walking up to the white Chevrolet pick up truck and knocking on the glass, telling Cueva the reason for the stop his dark tinted windows.

Much of the video is difficult to hear due to the rushing wind and fast moving traffic, but Jarrott seems calm as he chats with Cueva.

At one point he questions Cueva whether he has a firearm, and asks politely "do you mind if I take it off you for my safety?".

With the driver's side door open, he tells Cueva to "hold on" and begins to walk back to his police cruiser.

Meanwhile, Cueva can be seen on the other side of the car preparing the rifle.

As the two men walk on either side of the cargo bed, Ceuva then snaps the gun up and fires as officer Jarrott exclaims "oh s***". 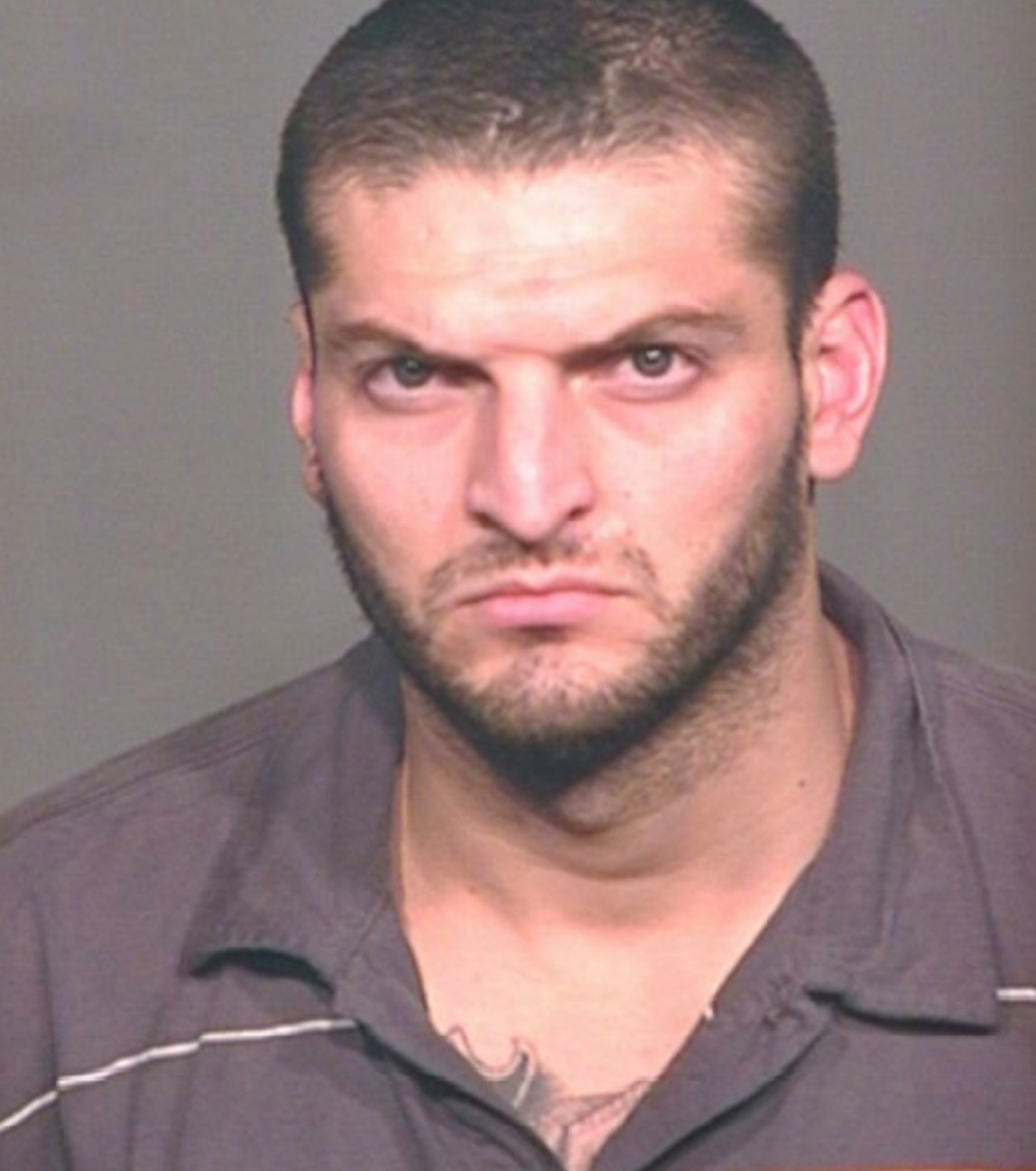 The gunman then fled the scene – and less than a minute later Jarrott's body was found by an agent from Homeland Security Investigations.

What followed was a 40-mile chase as officers from New Mexico State Police, the Cruces Police Department, the Dona Ana County Sheriff’s Office, and US Border Patrol pursued Cueva.

Gunfire was exchanged along the way, but cops managed to stop Cueva by using stingers to blow out his tires.

Even as his car came to a stop, Cueva exited his vehicle with a pistol and opened fire at officers.

Cueva was killed in the final shootout with police.

Las Cruces police officer Adrian De La Garza was also hit by gunfire and was airlifted to a trauma hospital in Texas.

Police said the killer had a "violent criminal history", including drug charges involving cocaine and meth. 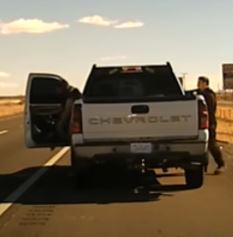 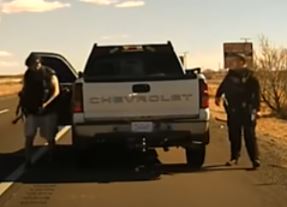 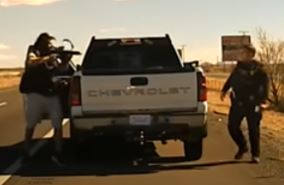 Officer Jarrott was sworn in as a New Mexico State Police (NMSP) officer in July 2015, having previously worked as an inspector for the New Mexico Department of Public Safety.

Chief Robert Thornton fought back tears at a press conference as he mourned officer Jarrott who he called "our fallen hero".

Thornton said: "We appreciate the public’s support during this difficult time.

"We will honor Officer Jarrott’s sacrifice by continuing to serve and protect the citizens of New Mexico."

He added: "Even when there was a situation that was tough, the guy was always smiling."

"I am horrified as we grieve another life cut down, another family crushed by senseless violence in our state," she said.

Jarrott was laid to rest on Friday, February 12 at Shakespeare Cemetery in Lordsburg during a private burial, reports FOX14.

cop, Do, gunned, horror, shows, vid
You may also like: