Escape FROM the country: House prices in UK cities are now rising faster than suburban and rural homes as the WFH trend wanes after Covid ‘race for space’

House prices in cities have been increasing at a greater rate than in rural areas as workers have been heading back into the office.

The pandemic and widespread introduction of working from home saw a Covid ‘race for space’ in 2020 and 2021, causing the price of properties in suburbs and rural areas to sky rocket.

However since the start of the year the trend has reversed in most areas, according to mortgage lender Halifax, meaning buyers are no longer prioritising larger homes with access to more green areas.

As people have gradually returned to the office, property prices across Britain’s cities have grown on average by 9.2 per cent, compared with 7.9 per cent growth in surrounding areas.

While in outer London boroughs house prices only increased by 4.6 per cent over the same time period – a nearly 50 per cent smaller rise.

In the London Borough of Brent, in the north-west of the capital, values have dropped by a huge 8.4 per cent this year.

Sheffield recorded the highest growth of any city in the country, with values soaring by 18.9 per cent. In the surrounding area, house prices rose by only 9.7 per cent –  taking the average house price from £192,090 to £228,353.

Manchester, Liverpool, Edinburgh, Leeds and Southampton have all also followed the trend. 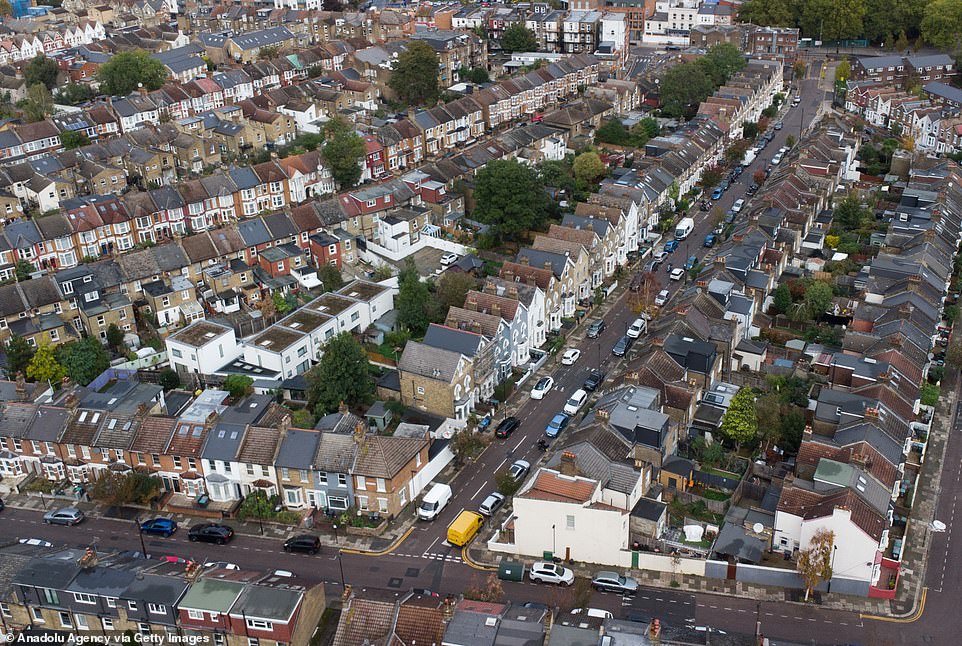 As the work from home trend wanes, so too have the house prices in rural and suburban areas. New figures show that property prices in major cities (London pictured) have grown 9.2 per cent on average since the beginning of the year but only by 7.9 per cent for surrounding areas 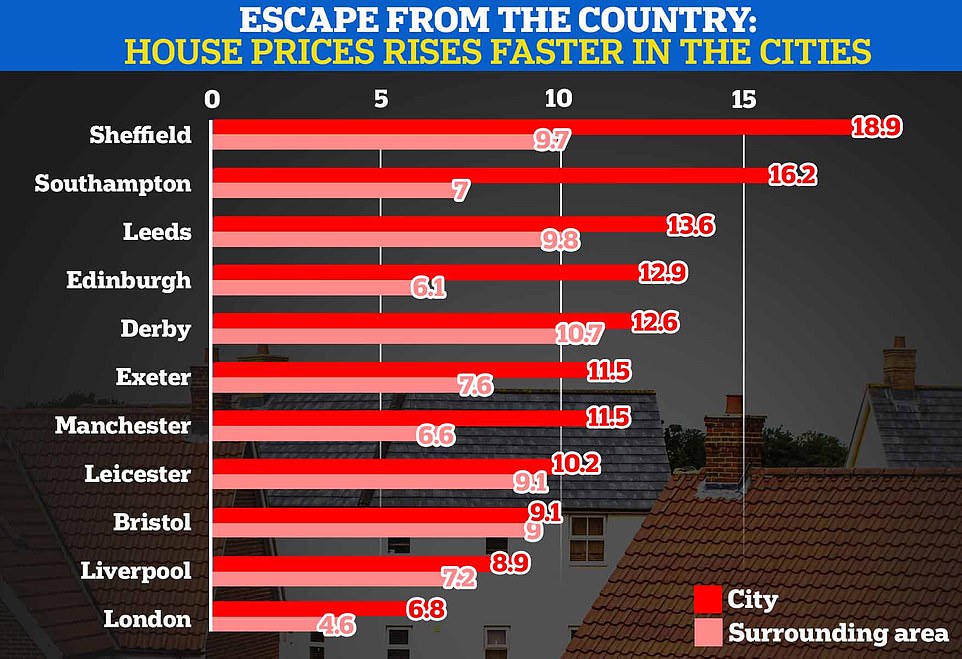 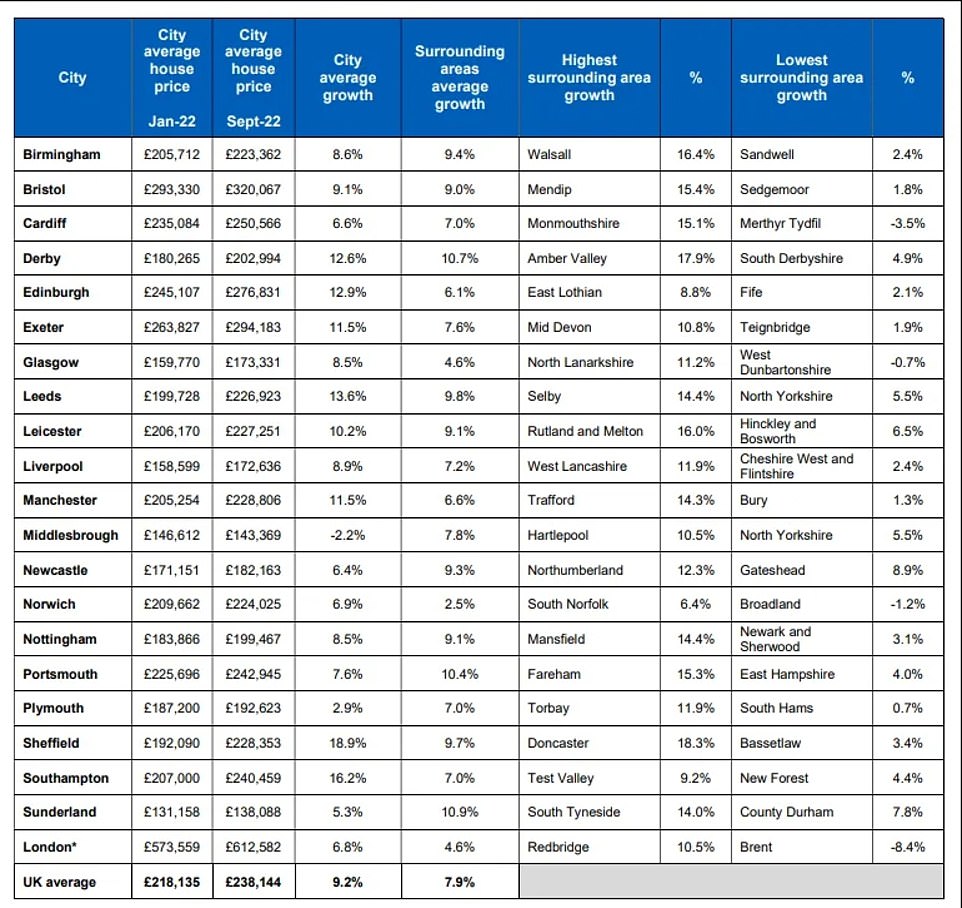 Sheffield recorded the highest growth of any city in the country, while Middlesbrough saw their prices drop by 2.2 per cent 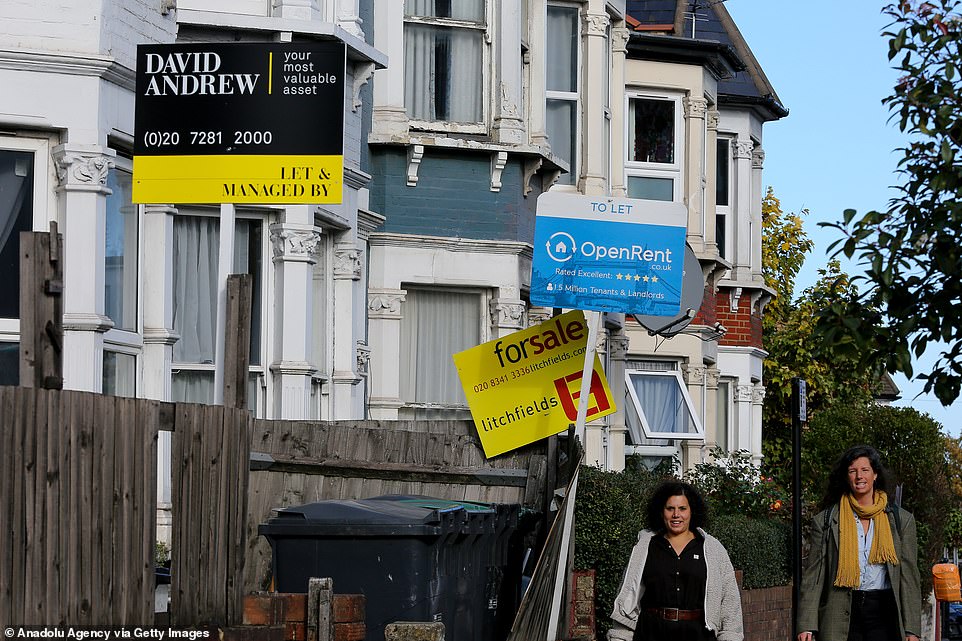 Homes in suburban regions saw values increase 7.9 per cent. It signals an end to the property ‘race for space’ created during the Covid lockdowns, which saw buyers prioritise larger homes and more access to green areas

In West Dunbartonshire, Scotland, house prices have fallen by -0.7 per cent since the start of the year.

A three-bedroom property in Knoxland Square, Dumbarton is listed on Rightmove for offers over £260,000.

However the website shows that the property was bought earlier this year for £283,000 – nearly 1 per cent higher than it is listed for currently.

Nearby in Glasgow, house prices have risen by 8.5 per cent, with a three-bedroom house often costing around £300,000.

Prices in areas surrounding Norwich have only grown 2.5 per cent compared to the city’s 6.9 per cent, though in the Broadland area house prices have decreased by 1.2 per cent.

However Rightmove shows that another similar detached property on the same road sold for exactly the same amount in January 2021. 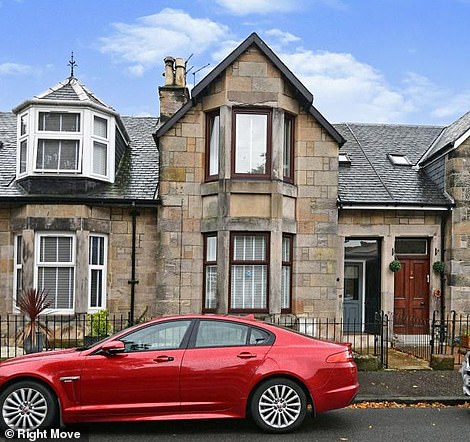 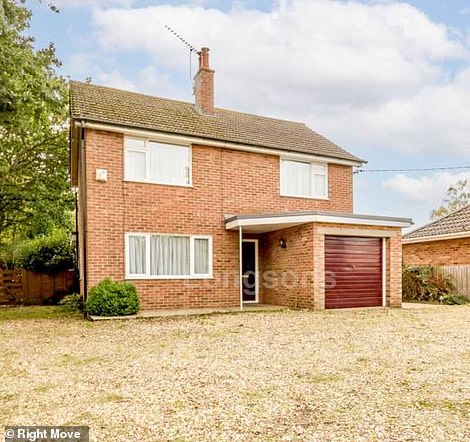 The story is the same for Methyr Tydfill, a town outside of Cardiff, where house prices have fallen 3.5 per cent this year.

A home with three bedrooms is listed for £245,000 in the town, which is about 20 miles north of the Welsh capital, while a similar sized home in on the road, Trevithick Gardens, sold for the same figure in September 2021. In Cardiff house prices have jumped up 6.6 per cent.

Even the capital is not immune from falls in house prices, Halifax compared inner verses outer boroughs for Greater London.

The borough of Brent was found to have had an 8.4 per cent fall in property prices, compared to a 6.8 per cent rise in the inner boroughs.

A semi-detached house in Brent still goes for eye-watering sums, with a three bedroom home going for £1.6million – an 8.4 per cent fall means the property could have been worth an additional £130,000 at the start of the year. 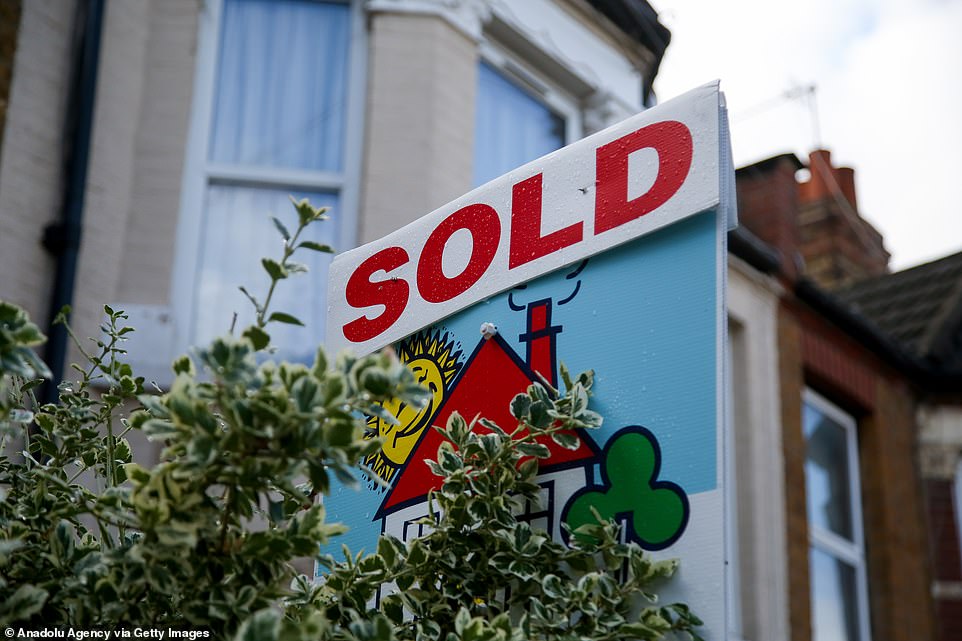 House prices even dropped in some areas of London such as Brent, by 8.4 per cent, though in the inner boroughs prices rose by 6.8 per cent

Andrew Asaam, mortgages director at Halifax, said a trend of people looking for greener spaces to move to, which was seen early on in the coronavirus pandemic, had remained.

He said: ‘That trend didn’t disappear completely this year, as house price growth in these areas remained strong.

‘But, as daily life started to get back to normal for many, the opportunity to live in cities became more attractive again, driving up demand.

‘There’s evidence of this in locations across the country, with property price inflation in the majority of cities outstripping increases in their surrounding areas.

‘Clearly the economic environment has changed considerably in the last few months, with the likelihood of more significant downward pressure on house prices, as the cost-of-living squeeze and higher borrowing costs limit demand.

‘The extent to which such trends will continue to shape the housing market is therefore uncertain.’

But some places have bucked the trend. In the surrounding areas of Birmingham, house prices have risen faster in percentage terms than in the city itself. This is reflected in places like Walsall, which has seen property price inflation of 16.4%, this year so far, according to Halifax.

And in the North East of England, Newcastle, Sunderland and Middlesbrough have recorded weaker house price growth this year so far than their surrounding areas.